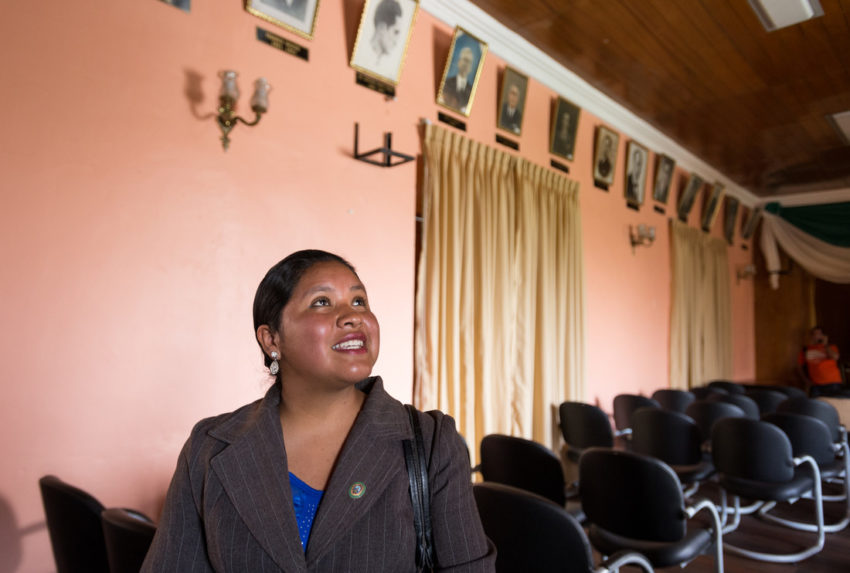 Denisse Pariona Lunasco, 24, in the Huanta municipal building, where she has worked for four years as an elected official. As a sponsored child, Denisse was active in the World Vision-run Children's Parliament in Huanta. (©2014 World Vision/photo by Eugene Lee)

In the auditorium of the municipal government building in Huanta, Peru, portraits of past mayors look down at former World Vision sponsored child Denisse Pariona Lunasco, and she is anything but intimidated. “Of course I want to be mayor,” she says. “I would like to be the first woman.”

The 24-year-old has already broken one barrier: At age 19, Denisse was the youngest mayoral adviser ever elected — not only in Huanta province but in all of Peru. As an adviser to Huanta’s mayor, Denisse advocates on behalf of the area’s children and supports the mayor from her office down the hall from the auditorium.

A decade ago, when she was 14, Denisse made her first trip to the mayor’s office — as a member of the World Vision-supported Children’s Parliament. During that visit, she and other teenagers talked with the mayor about children’s rights. Little did she know that she would return only five years later as an elected official with powerful input on decisions that affect Huanta’s youngest citizens.

Her office in the municipal building is just a few blocks from the home Denisse shares with her parents and siblings. In their small courtyard, Denisse and her mother, Aurora Lunasco, sit side by side, a visual representation of past and present. Denisse, with her pinstriped blazer, fashionable jeans, and heels, radiates self-assurance, determination, and potential — everything the youth of Huanta have to look forward to. Aurora wears the traditional outfit of her Quechua people — full skirt, sweater, and long braids — but is no less outspoken than her daughter. Aurora and mothers like her across Huanta put down the roots from which their children have grown and flourished.

Difficult past but bright future

Like so many other families, Denisse’s parents came to Huanta in 1996 to escape the violence ripping apart the Andean countryside. “When we first came there were only cacti — there were no roads,” says Aurora, 54. The family worked to establish a strong foundation in their new community. Her husband, Leonidas Pariona Salazar, and a friend built the family’s two-story brick house, and Aurora became involved with World Vision and its partner community organization. With leadership training, Aurora was elected president of the neighborhood association.

She also registered four of her six children in World Vision’s sponsored child program, launched in Peru in 1996. Kimberly Nachtwey from Port Charlotte, Florida, sponsored Denisse when she was 9. Over the 11 years she was sponsored, Denisse received countless letters, photos, and an extra gift from Kimberly. “My sponsor wrote in a very lovely way, like I was her daughter,” Denisse remembers. “In her letters she’d write and always advise me to follow the good way of God, to study and have a good education, and to always have God in my heart.”

Denisse and her siblings attended workshops on leadership, rights, values, and spiritual nurture. “I have a lot of faith in God,” says Denisse. She attends the main Catholic church in Huanta — located on the same square as her office.

Child sponsors helped improve the children’s current environment, building roads and schools, running nutrition workshops, and supporting local churches. They also supported the children’s future, especially through the Children’s Parliament. Kids like Denisse realized they had a voice — and that what they had to say was worth listening to.

I couldn’t have achieved what I’ve achieved if it hadn’t been for World Vision.—Denisse Pariona Lunasco

As the Children’s Parliament took shape in 2002, Denisse was there from the beginning and elected its second president. At first, she says, “I was afraid of saying what I thought. I was very shy.” Soon she and the other children learned “how to lead, how to listen to the community, and how to make decisions” — and their confidence grew. In addition to weekly meetings, the group served the community with projects like collecting school supplies and toys for needy children and conducting an anti-violence campaign.

It’s hard to believe this young woman wasn’t always so composed and determined. “World Vision helped me to develop as a person,” says Denisse. “I don’t consider myself wise, but I see myself different than before.”

After excelling in high school, Denisse went on to earn a technical degree in computing from a local university. It wasn’t long before she was tapped to serve her community in a more formal way.

Because of her involvement with World Vision and community leadership, Denisse is well known and respected in Huanta — so much so that a local political party asked her to join their ticket in the 2010 election, when she was 19. She was elected, along with the mayor and eight other advisers, to serve a four-year term.

“I wouldn’t be [in this office] if World Vision hadn’t come,” says Denisse. “I’d be without an education, married, with lots of children. But my parents took the opportunity to continue my life dreams. I couldn’t have achieved what I’ve achieved if it hadn’t been for World Vision.”

She drew on her leadership and advocacy experience with the Children’s Parliament to prepare for her new role. “[World Vision] didn’t waste its time training her,” says Rodomiro Chavez Rey Sanchez, the mayor Denisse worked for until their term ended in January. “She shines beauty in this government, she works hard.”

Back at the municipal building on a bright November morning, a group of second graders from nearby Luricocha — a district in Huanta province — show up for a visit. A dozen children and their adult chaperones file into the mayor’s office. Sitting behind the big wooden desk with a Peruvian flag at one end and the flag of Huanta province on the other, Denisse welcomes the group and fields questions from the children and adults. She’s poised and professional but quick to flash a warm smile — after all, she once was one of them.

In addition to working full time for the mayor and serving as her neighborhood president, Denisse is also studying accounting at the University Peruana de los Andes, a private university in Ayacucho, about an hour’s drive from Huanta. She won’t stop there: Denisse has her sights set on a master’s degree in finance and auditing, and perhaps a law degree after that. Eventually, though, she sees herself back in the municipal building as the mayor of Huanta — complete with her portrait on the wall.