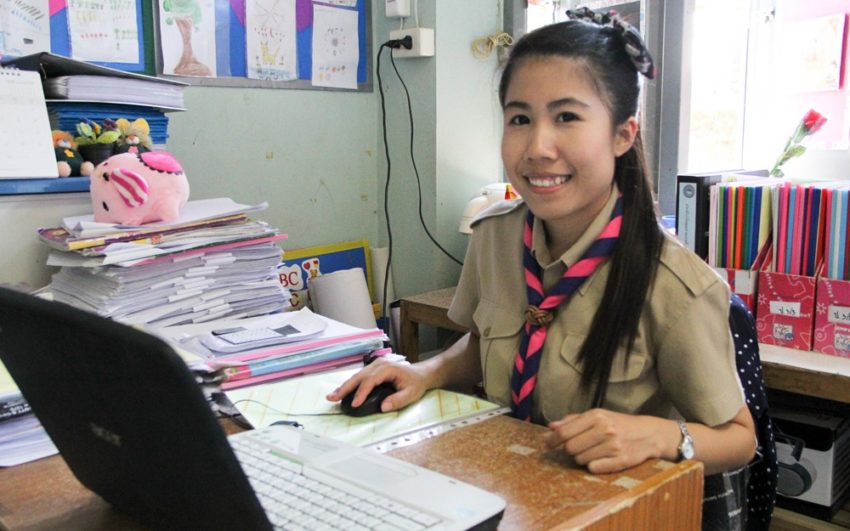 Chattering and disorderly like a bunch of sparrows, third-grade students at Manit Wittaya School in Chiang Rai excitedly await the arrival of their new English teacher.

As the sound of footsteps grows louder, the class falls silent.

“Is this third grade?” the teacher asks, walking into the classroom.

It seems to the students that the new teacher is younger than all the female teachers in the school. Her big eyes are gentle and friendly. She smiles.

Like the other teachers, she wears a scout uniform, khaki skirt, and shirt with a pink and blue scarf.

“Good afternoon. I’m here to be your new English teacher,” she says. “My name is Sangla Nantheppong. You can call me Teacher La.”

Sangla turns around, picks up a piece of chalk, and writes her name on the blackboard.

Having an education is very important. It enhances our skills and provides us with opportunities.—Sangla Nantheppong

Since she was the age of her students, Sangla dreamed that someday she would be a teacher.

Sangla always loved going to school as a child, but she worried that she might have to quit early, like her older sister who left school after sixth grade. Sangla’s anxiety even caused bad dreams.

Her father and mother, Sukam and Chansuay, worked as farm laborers, earning only about 120 baht, about $4 per day. It was not enough to support a family. Sangla’s parents argued about money and debts; her father was often out of work.

When she was in primary school, Sangla joined World Vision’s sponsorship program. As a sponsored child, she received school uniforms, shoes, and school supplies that helped her stay in school.

Sponsorship funding also made it possible for her parents and other community members to take part in agriculture training. Their livelihoods improved when they began raising chickens, and Sangla was able to remain in school.

Teacher hopes to instill the love of learning

From her early school days, Sangla studied hard and earned good grades. Letters from her World Vision sponsor sparked her interest in English.

She promised herself that one day she would write a letter in English all by herself.   Years later, her dream of becoming a teacher has been fulfilled — and she hopes to inspire her 185 third-grade students to learn English and pursue education.

Sangla says, “Having an education is very important. It enhances our skills and provides us with opportunities.”