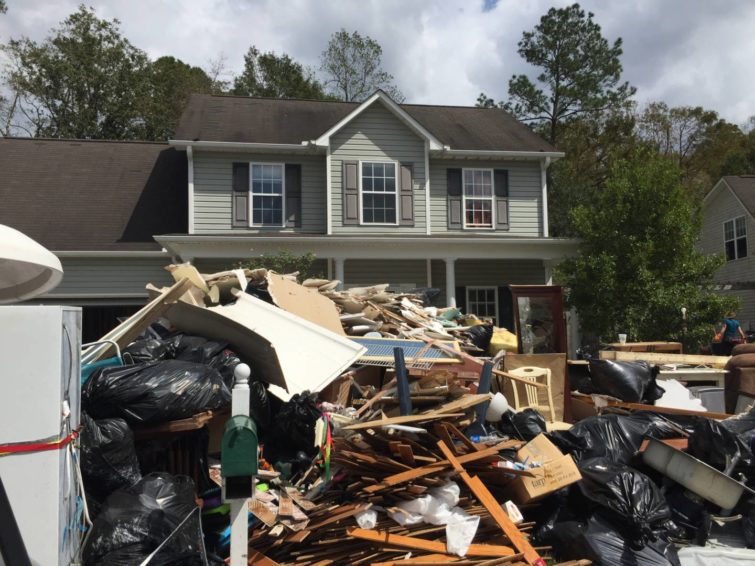 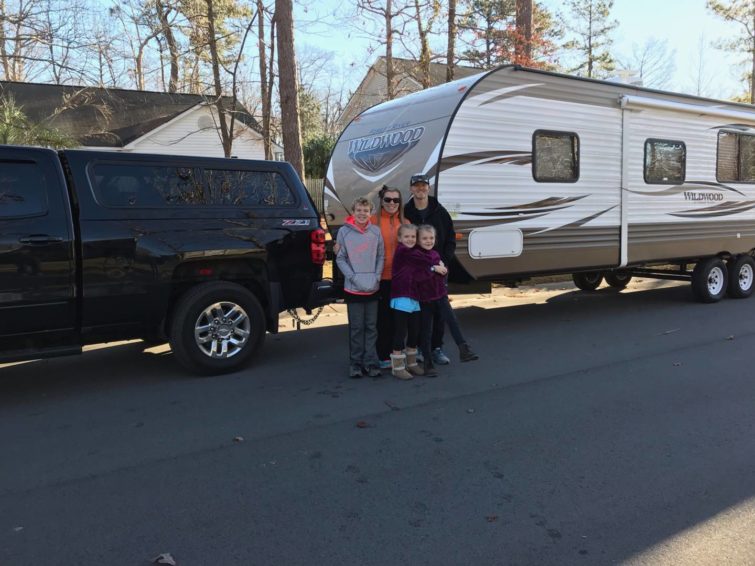 After Hurricane Florence, Randi Jo Rooks and her family made the decision to store their few remaining possessions and buy an RV, which their family will live in for the next nine months or however long they feel called. (Photo courtesy of Randi Jo Rooks)

As Hurricane Florence approached, Randi Jo Rooks, her husband, Brandon, and their three children had evacuated to her parents’ house in New Jersey to wait out the storm. Now all they could do was watch reports on The Weather Channel about their North Carolina neighborhood where 228,000 gallons of sewage mixed with floodwater spilled into the 44 houses in their community.

Hurricane Florence hit eastern North Carolina hard in September 2018. Much of the destruction covered the same area recovering from 2016’s Hurricane Matthew. Many people found their lives under water again.

Randi Jo worried for her neighbors — some of whom didn’t have flood insurance. She kept up with happenings via a neighborhood Facebook page she’d set up years earlier. Using that, she began to coordinate relief efforts — continuing to do so over the next month.

Despite what they were seeing on the news and hearing from neighbors, Randi Jo and Brandon didn’t feel overwhelmed. Randi Jo says, “As soon as I saw the water hit the house on the news, my husband and I felt so prepared for that moment.”

To find out what had prepared them for that moment, you have to go back to her children’s playroom on Aug. 18, 2013. She sat reading her girls a book about a Ugandan girl. She felt God telling her that he had plans for her to minister to others.

Within the week, Randi received a brochure in the mail asking her to become a World Vision Child Ambassador. She knew this is what God meant when he spoke to her in the playroom.

But almost immediately once she made the commitment to volunteer for World Vision, she was hit with a mystery illness that took two years to diagnosis as Lyme’s disease. (Read more about this time in Randi Jo’s story.)

During that dark time of sickness, when all of her own talents, strengths, and skills deserted her, she came to understand that her strength came from depending on God. She felt God telling her: “‘Even if I took away everything, you are still my beautiful daughter.’ It was really just about resting. He sunk that truth so deep in me.”

A couple of years later, as a Child Ambassador, she got 40 children sponsored in a year for World Vision, which earned her a trip to Uganda to see World Vision’s work and to meet two of her sponsored children — Mercy and Gidion.

In March 2018, she and other Child Ambassadors made the journey. “I would never have gone to Uganda before getting sick. That is too uncontrolled of an environment,” says Randi Jo. “Going was such a step of faith for me. I did have fear. Lyme disease people are so susceptible to any bacteria and viruses.”

She hated to leave her children at home, too. But once she arrived in Uganda she says, “I felt like I was home the entire time. I felt his presence the whole time. … It felt like a glimpse of heaven; a glimpse of eternity.”

Even though her husband, Brandon, didn’t go on the trip with her, Randi Jo felt like Uganda changed him as much as it did her. They both began to wrestle with the tremendous abundance they had in their lives and wanted to live simply. “The Lord was helping us to let go,” she says.

Two weekends before Hurricane Florence hit North Carolina’s coast, they both felt God telling them to put their house on the market. They began the process of sorting their things — figuring out what they wanted to keep and what they could do without.

(Not) Overwhelmed by floodwaters

The sewage water destroyed everything on their home’s first floor, including videotapes of her beloved grandmother, a piano from her grandmother, and their World Vision binder, which included letters and pictures from their sponsored children over the years. They’d all sat too long in that filthy water to be salvaged. But Randi Jo says that the memories will always live in their hearts.

Because of the trip to Uganda, Randi Jo and Brandon didn’t feel that loss as keenly as they might once have. “As soon as we started to flood, all I thought about was Gidion and Mercy. This stuff is so insignificant to eternal things. None of this is going to come with me to heaven,” she says. “I was so ready to let it all go. Take it. Take it all.”

Because they were not overwhelmed by their loss, they knew God was gifting them with the special privilege of serving their neighbors through their shared crisis. While Brandon painstakingly took inventory photos in their home, Randi Jo threw herself into organizing and streamlining all the volunteers for their neighbors without flood insurance.

Randi explains that she heard God’s voice so strongly during this cleanup time. Sometimes she’d be walking down the street and hear God tell her to stop, so she did. Then someone would emerge from their house crying, and she’d be there to console them. In the midst of the crisis, she found the sense of community she had sought.

She believes Hurricane Florence also helped teach her children valuable new lessons by breaking them out of their routine. Since they stayed with their grandparents, they weren’t going to the same school with their friends. They didn’t have their own toys. They began to understand the value of experiences over things. Randi Jo feels like they were being taken down the same path that she and Brandon were already on.

But her children already had begun to see the world differently as they went with their mom to every World Vision Child Ambassador event. Randi Jo also shared her stories about meeting their sponsored children in Uganda. Every day, the family chooses someone for whom they can pray. One day her son Raymond, 12, prayed: “I know Father. They’re just children like us, born in a different place without as many resources. Please send helpers to just lift them up.”

Obeying in the small things

After Brandon and Randi Jo stopped working round-the-clock on the neighborhood cleanup, they took the few possessions that survived Hurricane Florence and moved into her parents’ home. Each felt increasingly uneasy about buying a new house and filling it up with new things. Instead, they made the decision to store their few remaining possessions and buy an RV, which their family will live in for the next nine months or however long they feel called.

Randi Jo sees this as a sabbatical for the family, but says they’re not putting their ministry aside. “World Vision is such a part of our family. We’re always talking about what God is doing in the world,” she says. Raymond turns 13 this year. She feels like this is a great time for him to have a rite of passage of exploring the country. “Seeds [have been] planted in his heart,” she says.

And she believes seeds have been planted in the lives of child sponsors too. She sees the difference that $39 a month can make in the life of a child and the community because families choose to do the smallest act of obedience to God’s call and sponsor a child.

“So many of us want to make an impact in the world. We want justice. We want to be compassionate,” Randi Jo says. “Maybe it’s not about radically doing something, but maybe it is really just obeying in the small things.”

She encourages people who think they might want to join World Vision’s Child Ambassadors: “If the Lord is calling you, obey, obey, obey until he calls you elsewhere. He totally equips who he calls,” she says. “Be prepared to have your life changed.”

Stay updated about the latest adventures of Randi Jo and her family by checking out her blog.