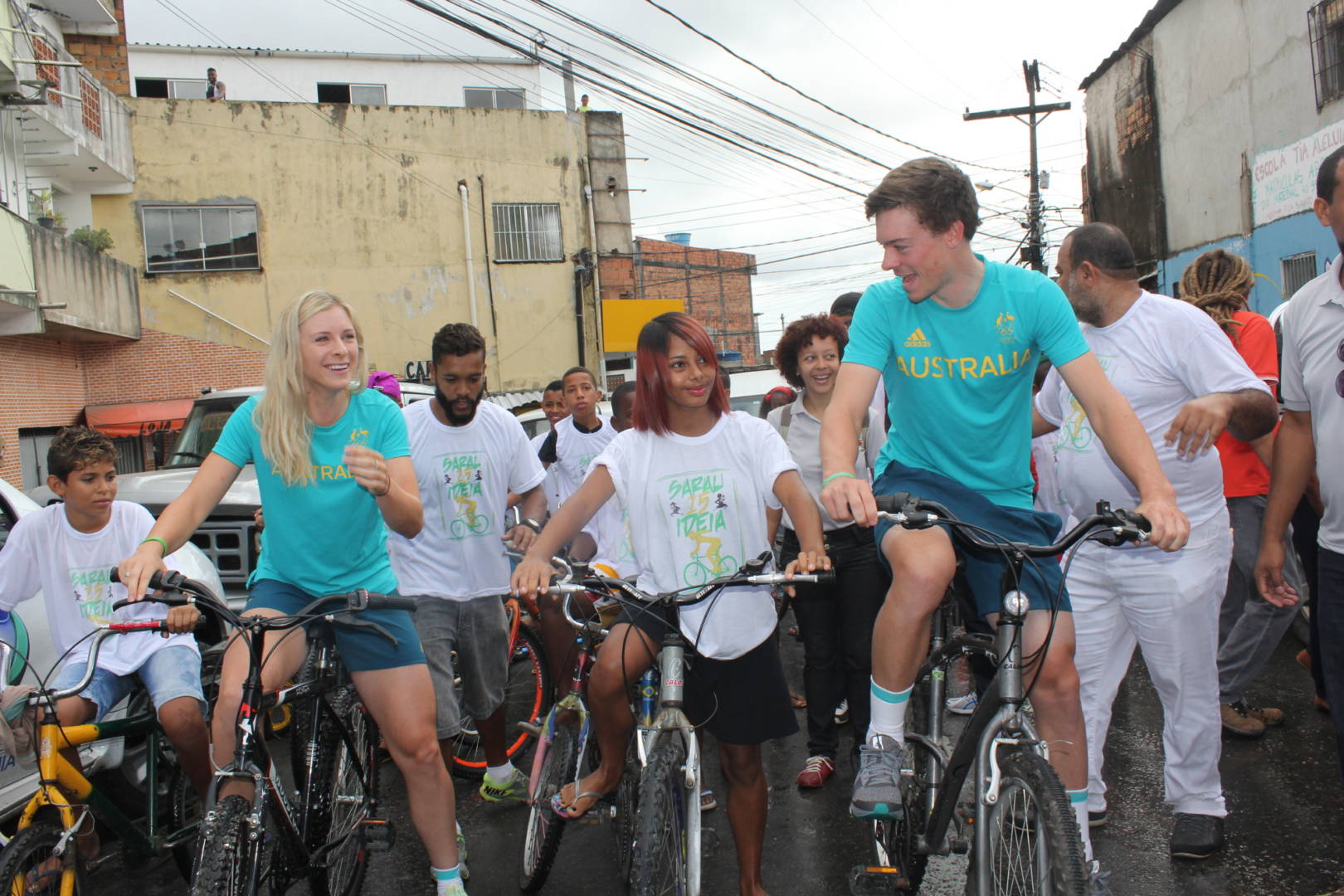 After competing in the 2016 Olympics, Australian cyclists and siblings Annette Edmonson, 24, and Alex Edmondson, 22, had one more goal to achieve in Brazil. On Aug. 20 they traveled from Rio to Cajazeiras community, near Salvador, the Bahia state capital, to meet a “sister,” Vanessa Francisca dos Santos, 18, who they knew only from photos.

The three young people’s lives have been connected for the past 10 years through World Vision’s child sponsorship program. In 2006, for her 14th birthday, Annette asked her parents to sponsor a child through World Vision. They were paired with Vanessa online. Since then, they have stayed in touch. Annette’s financial assistance has benefited Vanessa and the other children of Cajazeiras.

One of Annette’s goals in qualifying for the 2016 Olympics was to come to Brazil and meet Vanessa, she says. Annette competed in team and solo track cycling events in Rio, after taking a bronze medal in the 2012 London Games. Her team took fifth in the team pursuit and she came in eighth in the omnium event. Her younger brother, Alex, won a silver medal in the men’s team pursuit at the 2016 Games.

Annette was surprised by the large crowd that met them and the community’s warm reception.

“It was amazing,” she says. “I did not expect to find so many people.”

It took a moment to spot Vanessa in the crowd, then she and Annette ran to each other and embraced.

“It’s a dream come true to meet Annette,” Vanessa says, “and after so many years exchanging letters, to see her in person.”

Annette and Alex joined Vanessa in a community celebration of arts that is held monthly. They danced capoeira, joined a youth group Flash Mob, met sponsored children, and rode bikes with them. About 300 children participated.

World Vision’s Reinaldo Almeida says it is both a pleasure and a part of World Vision’s DNA for the organization to bring together people from different places around a cause.
“It is exciting to follow these two life stories,” says Reinaldo of Annette and Vanessa. “Today is a milestone in the history of World Vision in this community.”

Valdilene dos Santos, Vanessa’s mother, could not hold back the tears when she saw the activities honoring her daughter.

Vanessa has participated in World Vision programs since she was 3 years old. She’s one of 25 youth working for improvements in schools and other community institutions. She is the first of Valdilene’s daughters to graduate from high school.

Like Annette and Alex, Vanessa has world-class dreams. She’s studying to take the medical entrance exam next year and has set her sights on becoming a pediatrician.