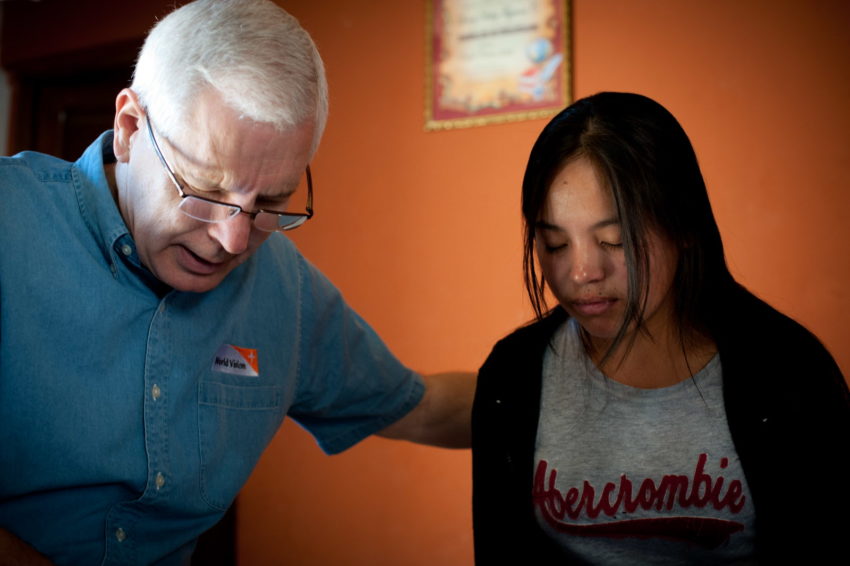 Sometimes it seems there is no justice. Ruth Daneyba Ardaya had every reason to think that.

She was raised by a hardworking, but impoverished, single mother. “She had me at 18,” says Ruth. “When [my father] knew my mother was pregnant, he left.”

Abandonment, alcoholism, abuse, unemployment, and poverty were common in her rural community in Tiraque province, Bolivia. But for Ruth and other children in Tiraque, World Vision sponsorship provided a counterbalance to their families’ burdens and helped to fill the gaps in what their parents could provide.

She remembers her sponsor helping with school materials, food, and snacks. World Vision also supported families with agriculture projects, a dam and water system for hygiene and irrigation, groups for mothers where they learned to keep their children healthy and well-nourished, business development training, and funding for a bakery.

Perhaps even more important than these things were the hope and healing instilled in Ruth and her friends. Through World Vision, they learned that God is their loving Father and wants the best for them.

“I started with the [World Vision] children’s network when I was 13. We learned about leadership and our rights and how to overcome our own problems,” says Ruth. The group stuck together, and a few years later when they heard of a girl being raped, Ruth’s youth group took the issue to city hall to seek justice. They succeeded.

Ruth began to see how her experiences were leading her to a life of service to children and families.

When Ruth was in fifth grade, her mother pulled her out of school and sent her with an uncle to work in Cochabamba, the regional capital. The uncle put her to work around the house, taking care of her little cousins, cooking, cleaning, washing clothes, and doing housework. Ruth was heartbroken and missed school terribly.

She went back to her village, hoping she could stay with her mother and sisters, but her mother had to move to Argentina and took the younger children with her. At age 15, Ruth was left with her grandparents, whom she calls mom and dad. Ruth struggled to stay in school while supporting herself doing hard manual labor. One day she was injured carrying heavy weights and couldn’t walk; she needed a hernia operation.

“I needed urgent surgery. Mom didn’t have the money for it,” Ruth says. World Vision helped cover the cost. She recovered and graduated from high school in 2009, then moved to Cochabamba to work and take a secretarial course. Determined and supporting herself, she yearned for something more. She set her sights on what seemed an impossible goal: becoming a lawyer.

She applied to university and was accepted. But as she looked at the costs compared to how much she made and her current expenses, what seemed like a glimmer of hope faded back into feeling like an impossible dream that would never come to fruition.

In 2011, Ruth told her story to World Vision U.S. President Rich Stearns when he visited her youth group.

“I want to make justice [for] children, to help children with problems they have, children who are without parents and abused by others,” she said. “That’s my focus.”

“I want to be a professional five years from now. I will be graduated, and my specialty will be family law, so I can help children who don’t have mothers or fathers and to fulfill the name of justice.

“We have to go forward. That’s why God gave us life,” she declared.

Ruth’s story and her indomitable spirit touched Rich in a very personal way.

“I have a daughter who is 19, but she has an easier life,” he told her. “She has parents who pay for her tuition.”

Ruth’s reply tore his heart out: “I’d like to have the opportunity to ask my parents [for help], but I don’t know how a father loves his daughter. I don’t know that.”

After praying for Ruth and encouraging her, Rich told World Vision local staff that he personally wanted to do something to help Ruth.

“I wanted this girl just once in her life to feel the love of a father,” he said.

A few weeks later he set up an account for Ruth in Bolivia to help with her education and living expenses. Rich joked that his wife, Reneé, and he had three kids in college instead of two.

“Hearing Ruth’s story reminded me how lucky I am to have such an amazing dad — one who always supported my hopes and dreams,” says Grace. “Meeting Ruth in person was an amazing experience after having heard about all she had accomplished from my dad. I saw firsthand how she, even without the support of a father, was able to overcome hardship, pursue her dreams, and positively impact her community.”

As the years have passed, emails and letters between Rich and Ruth have conveyed words of encouragement and blessing, deepening the relationship.

Rich encourages her to seek inspiration in God’s word and stay focused on her goals. He praises her computer skills, tells her news of his children’s graduations and marriages, and always adds, “I am praying for you!”

Ruth writes about her roommates, visiting her aging grandparents in her home village — and her great sadness when her grandfather died. She tells him about reconnecting with her mother and siblings, and finally, achieving her long-sought dream of graduating with a law degree. “I cried with emotion,” she says.

“It’s been almost nine years since I met you, that day when I received the greatest blessing,” Ruth writes.

Now she’s starting a new stage of life, and so is Rich.

“I am sad to know that you are retiring from the great World Vision family,” she writes, after “working so many years for the children of the world.”

But the World Vision family connection remains strong. And Rich’s legacy of love and caring will be passed on through Ruth and the lives of so many other children around the world, as well as his own children.

Sponsoring a child in Bolivia is a personal way to show God’s love to a child in need.