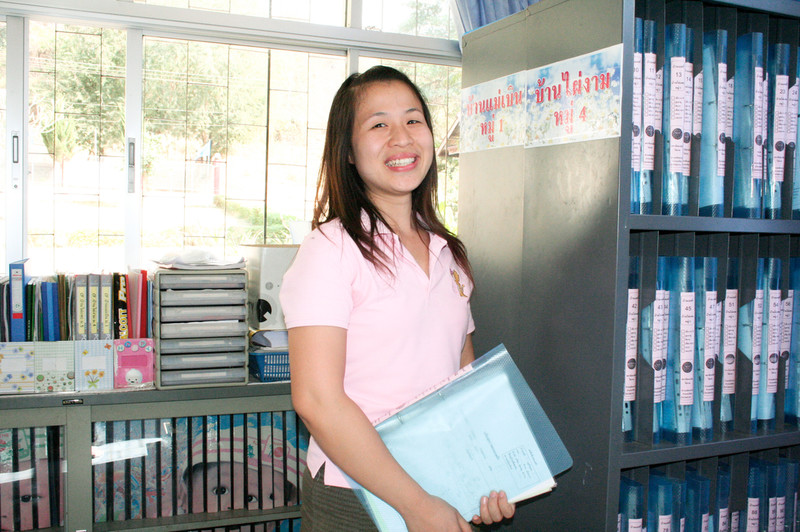 Sumitra Boonyuen, 27, works as a database administrator at a hospital close to her hometown in northern Thailand. (©2013 World Vision/photo by Somluck Khamsaen)

Among neat rows of blue notebooks and piles of patient paperwork at Song Suem Sukapab Hospital, Sumitra Boonyuen, a former sponsored child in Thailand, is seemingly worlds away from the hardships in her impoverished hometown.

However, the hospital’s clean, professional setting rests just miles from Ban Pai, Thailand, where local farmers toil in rice fields and children used to forgo school to join them.

Fifteen years ago, children in Ban Pai were virtually cut off from any future outside their community. The poor condition of the road to the village made traveling difficult, and the path to education often terminated when children dropped out of school to work in the fields.

The rice farmers in Ban Pai are never far from Sumitra’s thoughts, even as she sits at her computer. Because Song Suem Sukapab Hospital serves the population of Ban Pai and its surrounding area, Sumitra’s work as a database manager directly contributes to the health of her community. She organizes and updates pati

ent medical files, guaranteeing that doctors and nurses have current, accurate information as they treat patients.

Sumitra, now 27, overcame the challenges all children in her community faced — with her World Vision sponsor supporting her along the way.

As one of the first children registered for sponsorship when World Vision came to Ban Pai in 1999, Sumitra received help with school fees, uniforms, supplies, and transportation, ensuring she could continue her education. Her Canadian sponsor, whom she calls “uncle George,” provided practical help and constant encouragement.

Though her family was poor, Sumitra’s parents, Sawat and Kammao Boonyuen, worked hard. With the same work ethic, Sumitra completed high school and set her sights on a university degree.

Sights set on a university degree

She was accepted to Lampang Rajabhat University, but her parents couldn’t afford the high price tag of tuition, deterring Sumitra’s plans. She explained her predicament to World Vision staff. They talked with Sawat and Kammao, who agreed to provide whatever they could afford. And, thanks to uncle George’s continued assistance, World Vision helped her with tuition and other expenses.

“If it were not for World Vision’s support that day, I would not complete my bachelor’s degree and have the honor of working and helping sick people in my hometown,” says Sumitra.

While Sumitra earned her degree, Sawat also received an education. He began attending World Vision-organized meetings and livelihood training. Soon, he received four piglets, which he raised, bred, and sold.

“I sell them, and I get [about $91] each time to pay for our family expenses during the school term,” Sawat says. “I raise the next group of pigs with the income that I get.”

Others in Ban Pai benefit from World Vision’s holistic development model, which rests on child sponsorship’s strong foundation. In a village where many parents pulled their children out of school to earn extra income, 70% of parents now acknowledge the importance of education.

World Vision is a friend to the poor. They understand the problems of families at the grassroots level and provide the best solution for the situation.—Sumitra Boonyuen

‘A friend to the poor’

“World Vision is a friend to the poor. They understand the problems of families at the grassroots level and provide the best solution for the situation,” Sumitra says.

The best solution for Sumitra was pursuing higher education. With hard work and uncle George’s support, she graduated in 2010 from Lampang Rajabhat University with a degree in computer science —the third person from her village to earn a bachelor’s degree.

After using what she learned to earn a living and impact her community, Sumitra has plans to do more.

In 2012, she returned to college to pursue an additional degree in public health. With a job waiting at another hospital — which provided a scholarship for her new degree — next spring Sumitra will begin a new career teaching others how to stay healthy.

She says she owes all of this to the generosity of uncle George, who not only provided the funding for her first degree but also wrote her letters of encouragement.

“If I did not receive help, I would be in great trouble today,” Sumitra says. “If I have a chance to meet uncle George, I will thank him for helping me to have a new life and good future.”