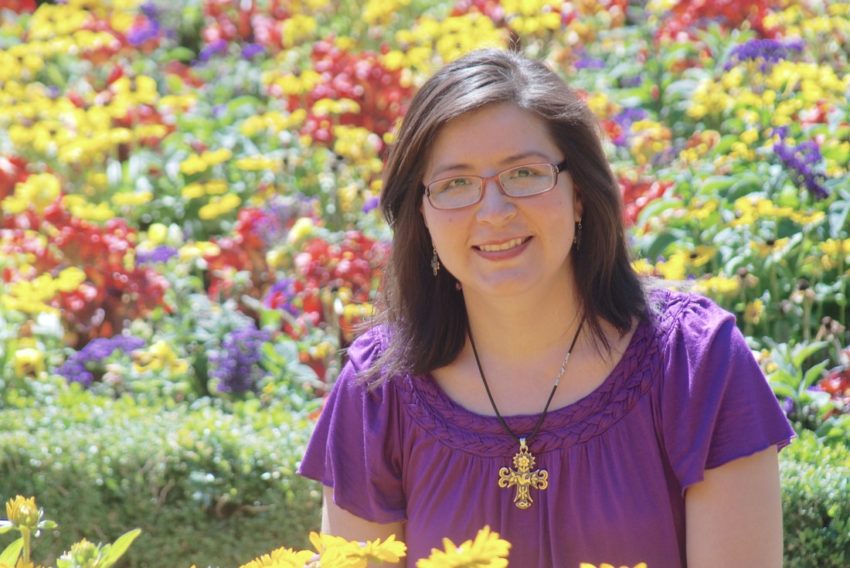 Growing up in the valley city of Cochabamba, Bolivia, Raquel Feagins enjoyed the area’s natural beauty and temperate weather. But political unrest increased during the late 1970s and early 80s. Raquel’s strong family and child sponsorship protected her in those formative years, and today she’s a chaplain committed to living out her faith.

Life was not easy during Raquel’s childhood. Bolivia experienced coups, counter-coups, and caretaker governments, giving way to nine presidents in six years. Hyperinflation caused families to stand in long lines for basic necessities. People responded by demonstrating and holding strikes in the streets. Her parents, who worked in ministry, did their best to protect Raquel and her three siblings, raising them in a loving home with a foundation built on Christ.

“I was very little at the time, but I remember hearing adults talking about the government instability,” says Raquel, now 40.

In the midst of the chaos, Raquel and her older sister, Dani, both became sponsored children through World Vision. Her sponsor was a single woman who worked as a teacher. Raquel received letters, which she remains grateful for, knowing how hard it was to get mail during the unrest. Sponsorship provided school fees, uniforms, and shoes. But most of all, sponsorship allowed Raquel and Dani to attend a Christian school.

“It provided me with stability and reinforced the Christian upbringing I had at home, and I was able to go to school every day with no interruptions,” Raquel says. “That was a gift because I knew kids that didn’t go to school for months because teachers were on strike.”

When Raquel was 10, her father received a scholarship to come to the U.S. Her family moved to Texas, where her sponsor’s initial support continued to bless her life.

From child sponsorship to a Harvard scholarship

“I was able to come into the American school system without any problems — I knew all my basics,” she says. “If I had not had that sponsorship, it may have been possible to catch up through remediation, but everything I have is because of that education I had in Bolivia.”

Her family stayed in the U.S., and Raquel went on to earn a scholarship to Harvard, where she studied English and American literature. During her time there, she began to sense God calling her into ministry.

She moved to the Texas-Mexico border and taught high school in an impoverished community for five years before enrolling in seminary at Southern Methodist University in 2003. Raquel graduated in 2007 and began serving as a pastor. She currently works as a chaplain at a local hospital. Through her ministry journey, she met her husband, also a pastor in the Methodist church.

“I’m thankful for the things I’ve been given and all the ways people have invested in me, and I want to give that back,” Raquel says. “All of us are called to be transformative presences. We don’t exist in a vacuum.”

Her sister, Dani, also is giving back by working as a reading specialist with children living in poverty along the border between the U.S. and Mexico. Raquel says she can see God working through both sisters’ experiences and callings.

“Having a strong Christian family and a strong foundation in this Christian school made possible by the sponsorship of World Vision really shaped me,” Raquel says. “God’s plan is so much greater than what we plan for ourselves, and God can transform anything for our good.”

God’s plan is so much greater than what we plan for ourselves.—Raquel Feagins

Raquel encourages World Vision sponsors to continue in their prayers and support.

“Continue to love your child that you’re sponsoring,” she says. “Encourage them. Pray for them. God acts in ways that we don’t anticipate. God uses the gift that we give and multiplies it and uses it to transform a child’s life and a community.