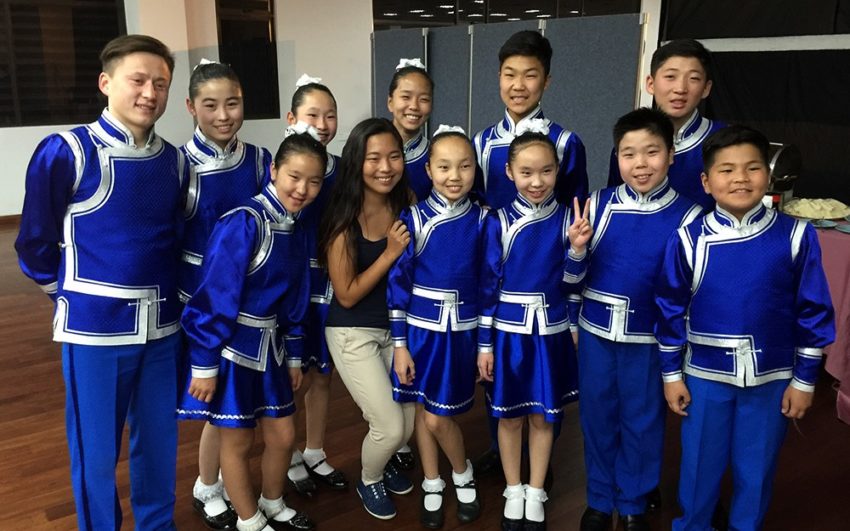 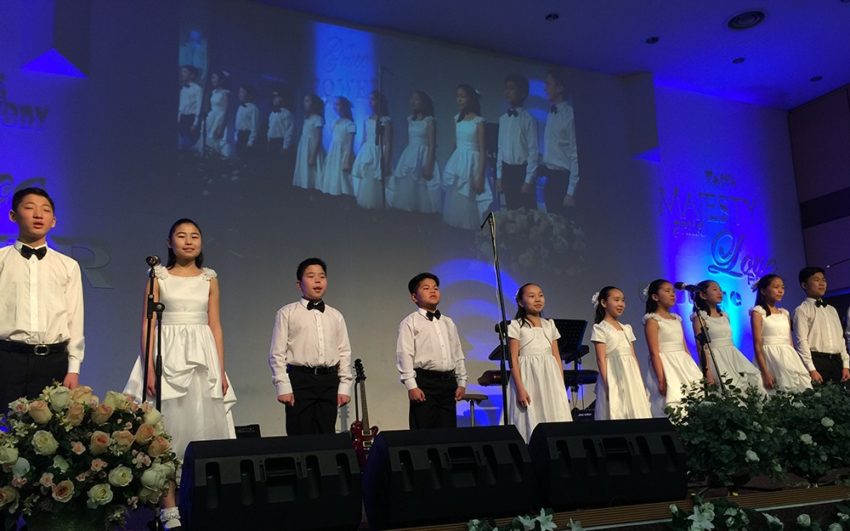 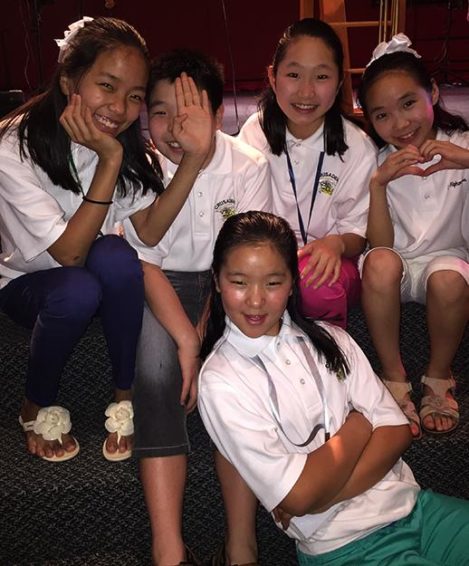 These cheerful girls once lived in tunnels running under the streets of Ulaanbaatar, Mongolia's capital. (Photo courtesy of Marilee Pierce Dunker) 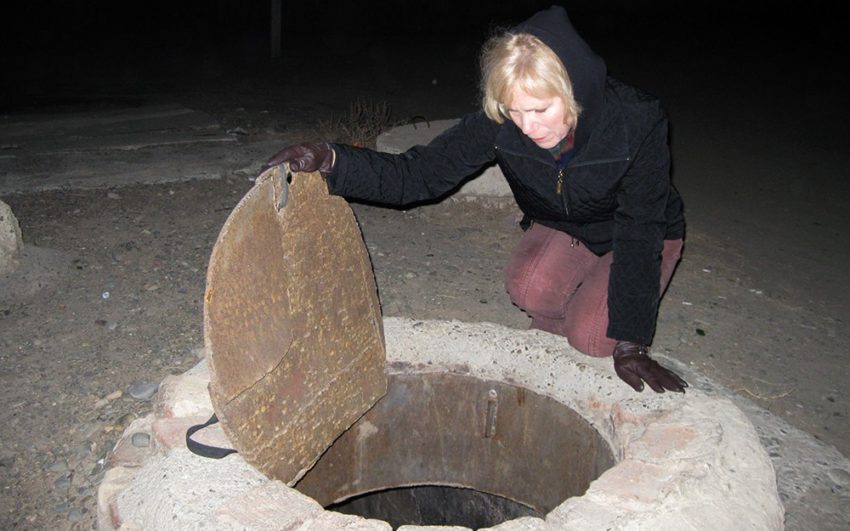 On a visit to Ulaanbaatar in 2010, Marilee saw firsthand the tunnels beneath the city. (Photo courtesy of Marilee Pierce Dunker) 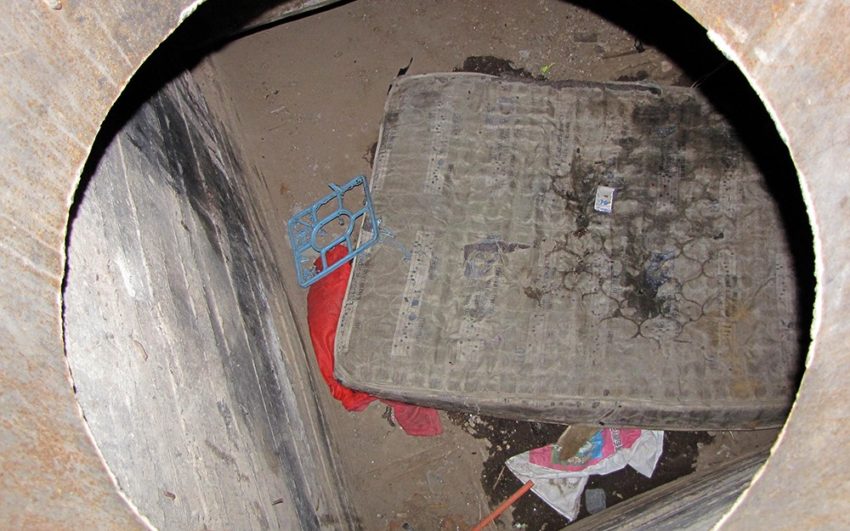 Down inside the manhole was a mattress and dirty clothes. Some of the homeless population of Ulaanbaatar still seek shelter in these tunnels during Mongolia's frigid winters. (Photo courtesy of Marilee Pierce Dunker) 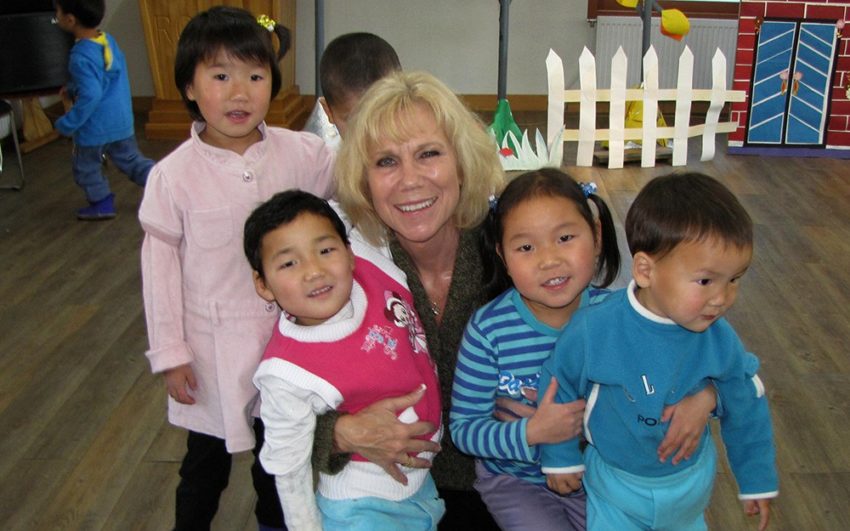 Most of the children living in the tunnels are now being safely cared for in children's homes like World Vision's "lighthouses." (Photo courtesy of Marilee Pierce Dunker) 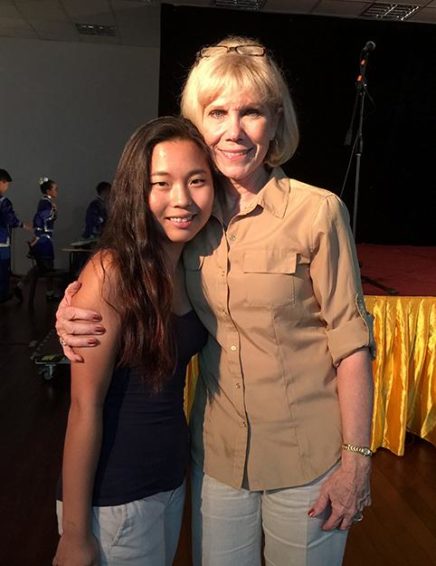 Through sponsorship, many other children like Angee are provided with food, healthcare, and an education. (Photo courtesy of Marilee Pierce Dunker) 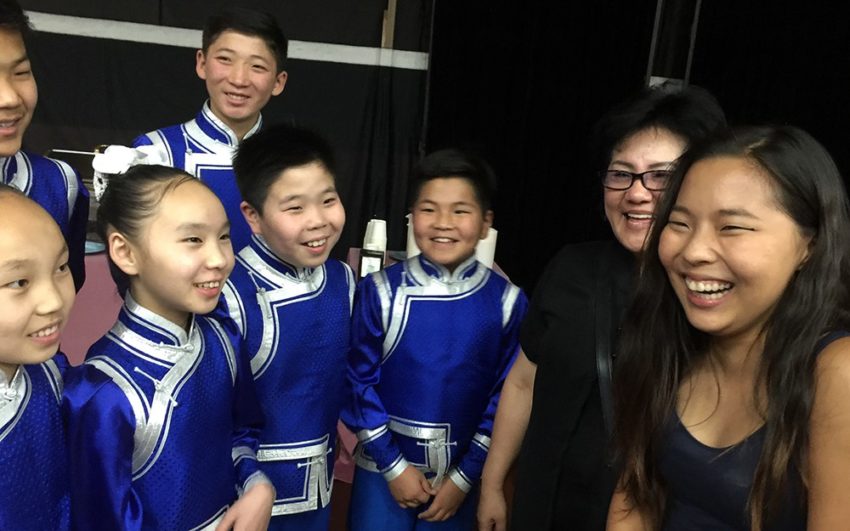 The choir was amazed to learn that Angee had been a sponsored child in Mongolia, just like them. (Photo courtesy of Marilee Pierce Dunker)

Narangaruuu Faucault Hapahrapbyy — try saying that Mongolian name three times fast. I find it impossible to pronounce without tripping over my tongue. But even so, it is a name I will never forget.

I am writing from Melaka, Malaysia, where I am taking a little rest and relaxation before going on to Singapore. I have to admit, I need it!

For the past two weeks I have been traveling with World Vision’s Blue Sky Choir from Ulaanbaatar (more on the choir later). Ulaanbaatar is the capital of Mongolia and the home to our World Vision Lighthouse and music school for children living on the streets.

The Malaysian audiences were deeply moved by the children’s sweet voices and amazing testimonies. Seeing their joyful faces, it was sobering even for me to realize that some of them might not have survived if it had not been for World Vision sponsorship.

I am more convinced than ever that when we sponsor a child, we change the world.—Marilee Pierce Dunker

Their stories were particularly wrenching to me because I went to Mongolia in 2010 and saw for myself where many of them came from. The homeless of Ulaanbaatar don’t live on the streets in the winter. They would freeze to death in the minus-40 degree weather. Instead, they seek shelter in the tunnels that run under the streets. Large steam pipes carry heat to the city’s buildings, and for many children living on the streets — before World Vision came — they provided the only warm place to sleep.

But the tunnels are dark and dirty and full of violence and disease. When World Vision began working in Ulaanbaatar in 1994, we found tens of thousands of little ones barely surviving in this dangerous underworld. They were children who had been abandoned, abused, and forgotten by the world. We called them the “children of the tunnels.”

World Vision reached into that darkness and pulled hundreds of these children up into the light. In fact, our children’s homes in Mongolia are called “lighthouses.” There, the children are given healthy food, education, medical care, and shelter. But what I loved most about the lighthouses I visited was the joy and sense of family I felt when I entered the door. These are group homes run by loving, staff who make sure that each child knows they are special to them and to God. And when I asked the children what they like best about living there, several spoke up and said, “We are no longer alone. We are a family.”

For many children, singing and music is healing, and in 2004, World Vision began a music program for children. Out of this, the Blue Sky Choir was born. Since then, more than 100 children have gone through the program. The choir has traveled to eight different countries and won medals in several music festivals. Over the years, graduates have gone on to university or to careers as professional singers or dancers. And some are now married with children of their own.

The 11 children I traveled with in Malaysia ranged in age from 11 to 19. Bato is the oldest and the veteran of the group. I immediately recognized him from my visit five years ago. He sings a solo on “You raise me up” that never failed to bring tears to my eyes when I remembered where he had come from. Abandoned by his mother and beaten regularly by his alcoholic stepfather, he had run away when he was only 6. The police found him in the tunnels and brought him to World Vision’s center where he has lived ever since.

Now, he is in his first year of college, majoring in hotel management. But he confidently informed me that he did not intend to only work in a hotel. One day he intends to own one.

All the children have big dreams. Thoughtful Davka wants to be a teacher, and beautiful Enkhee plans to be a lawyer. Batlo, the tallest of the group, hopes to be a professional basketball player one day! And every one of the children echoed Bato’s words, saying they intend to help others as they have been helped.

World Vision staff appropriately called this tour “From the streets to the sky,” because that is exactly what has happened in these children’s lives. I have often said that the children we serve through sponsorship are the hope of the future. Looking at these special boys and girls with their brilliant minds and caring hearts, I am more convinced than ever that when we sponsor a child, we change the world. These children are the hope of Mongolia.

So, you may be asking yourself, where does Narangaruuu Faucault Hapahrapbyy come into the story?

One night, the children and I went to the Uplands International School of Penang to sing and share. It is one of the most beautiful private schools in Malaysia. The children who attend are not poor — their parents pay well to give them an excellent education, and about 60 parents and students came for the evening presentation. Before it began, Bill Mitchell, the school official who had invited us, told me that one of their boarding students was originally from Mongolia. He pointed her out in the first row and I made a note to introduce her to the choir after the presentation.

But after I spoke, as the children sang their final song, this beautiful 15-year-old girl — Narangaruuu Faucault Hapahrapbyy, whose nickname is Angee — came over to me and threw her arms around me.

“You cannot know how much it means to me to meet you,” she said with tears in her eyes. “You see, I was a World Vision sponsored child when I lived in Mongolia. I am one of yours.”

I couldn’t believe my ears. “You were a sponsored child? Tell me your story! How did you get here?” I asked with amazement.

“My mother was put in jail when I was very little,” Angee explained. “My grandparents were old and very poor. We lived in a ger (round tent made from animal skins) and had very little. Sometimes we would not have food. But then World Vision came and I was sponsored. If it had not been for the things World Vision did for me — food, clothes, school — I would not have made it until my mother’s sister was finally able to adopt me. She took me with her to Indonesia. I am now on scholarship here at Uplands as a boarding student. But I have never forgotten those years, and I am grateful to God for World Vision.”

The story gets even better. A couple days later I learned that Angee’s aunt had worked part-time for World Vision in Mongolia before moving to Indonesia, and one of the staff traveling with the choir actually remembered her! When you live in God’s space, it can be a small world.

I may never be able to properly pronounce Angee’s Mongolian name. But I will never forget the feel of her hug or the look on her face when she so proudly announced, “I was a sponsored child. I am one of yours.”

Thank you, Jesus, for Angee, the Blue Sky Choir, and all the beautiful children we take every day around the world — from the streets to the sky.