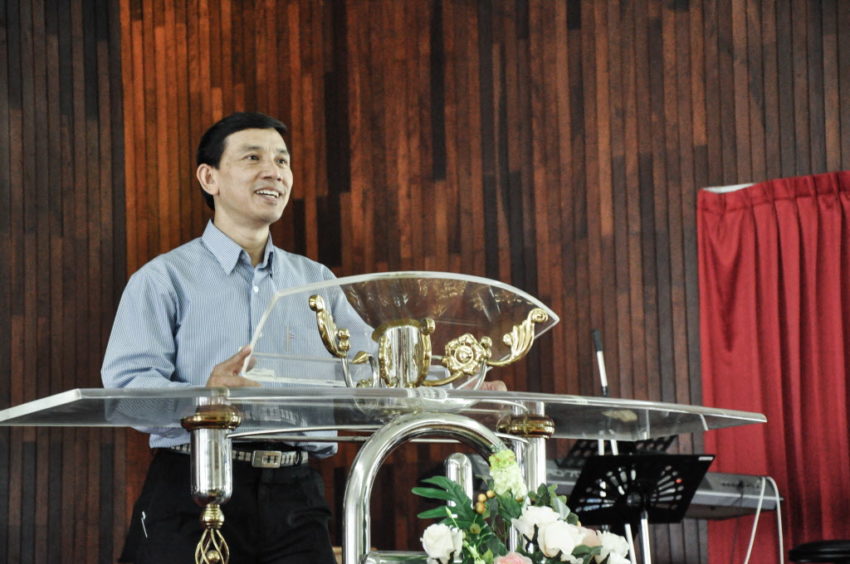 Rev. Thoedsak Akkrasawart is a former sponsored child. Despite the struggles his family faced, his parents ensured that he was in school. When he became a sponsored child, he thought that his sponsor must be a wealthy man. He learned later that his sponsor was a low-income cleaner and had health problems. (©2012 World Vision/photo by Janice Evidente)

The Rev. Thoedsak Akkrasawart remembers well the countless hours he and two siblings spent grinding flour and peanuts to help their parents eke out a tiny income on the streets of their hometown in northern Thailand.

Despite his family’s poverty, Thoedsak’s parents were determined their children would have a better life. With the little they had, they found a way to send their three children to school. Thoedsak’s father sold dumplings, and their mother peddled dried beef and fruit on the dirt roads of Chiang Mai, today a city of 172,000 people.

Even with five family members working, life’s basics often ran out. When their school uniforms grew tattered, the children didn’t receive new ones. Lunch was often only a little rice with fish sauce.

‘There is no way I will forget him’

‘These daily hardships continued until Thoedsak turned 10 — the year a San Francisco janitor sponsored him.

“I received letters and pictures from my sponsor,” Thoedsak, now 52, recalls. “As a child, I thought my sponsor must be a wealthy man in order to support me. I was wrong. I later found out that my sponsor was a low-income cleaner who suffered many strokes.”

Thoedsak carefully saved every photo and letter his sponsor sent. But because his family’s house flooded more than once — at times reaching as high as the boy’s chest — none of these mementos survived. But it doesn’t matter. “There is no way I will forget him,” he says. “He will always be in my heart, in my life.”

I was amazed by his compassion to help despite his dire situation. It made me realize that I don’t have to be rich myself to help others.—Thoedsak Akkrasawart

Determined not to miss the opportunities his Christian parents and sponsor made possible for him, Thoedsak worked hard in school. Sponsorship covered most of his education, so his parents were able to devote more of their meager income to pay for his two older siblings’ education.

Thoedsak is thankful for much more than education. “The sponsorship activities also established the foundation for our values, which were very helpful during our teenage days. They provided us the platform to express ourselves.”

Sharing God’s blessings with others

Although he didn’t know it at the time, Thoedsak’s future career as a pastor was being shaped through the faithfulness of his sponsor. “I was amazed by his compassion to help despite his dire situation. It made me realize that I don’t have to be rich myself to help others.”

The encouragement and care he received through child sponsorship activities helped inspire his decision to go into ministry. When Thoedsak decided to pursue a college degree, World Vision provided the funds for him to attend his chosen school: Bangkok Bible College.

Passing on some of these blessings, Thoedsak and a friend soon began visiting northern Thailand’s Karen ethnic group. Through their kindness and sharing the gospel, numerous families found faith in Christ.

The young men also met many orphans among the Karen people who were not in school. Thoedsak wanted to give these children the same opportunities he had received.

“I convinced my friend that we should find some sponsors willing to support them,” Thoedsak says. “Today, the project is still sponsoring 200 children. Even with limited resources, I and my wife still support the project. World Vision has planted generosity in my heart.”

Thoedsak and his wife, Pat, are parents to a 20-year-old son and 17-year-old daughter. He serves as an associate pastor of the 1,200-member Jaisamarn Full Gospel Church in Bangkok, and he credits his success to the generosity of his sponsor.

“Education is like a door of opportunities. My sponsor was the gateway,” he says. “He saved his earnings to support me. His spirit of giving has inspired me. I believe this kind of spirit must be replicated. The legacy has to go on.”