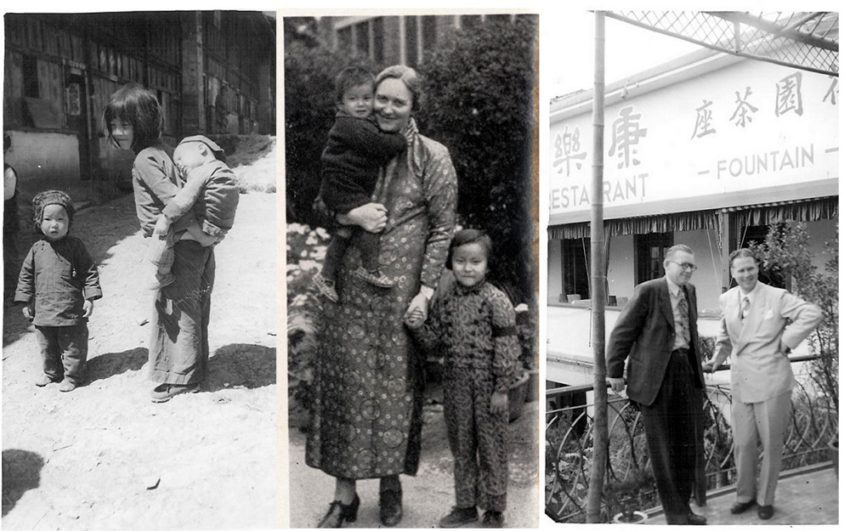 Left: Bob Pierce did not take any pictures of White Jade when he met her, but he photographed this other girl who was similar in age on one of his trips to China. Middle: Tena Holkeboer, the American missionary in Amoy, with two children. Right: Ken Anderson (left) and Bob Pierce (right) on Bob's second trip to China in 1948. (Courtesy Marilee Pierce Dunker)

While the story of Christ’s life, death, and resurrection is the greatest story ever told, I would like to tell you another true story about a little girl God used to change one man’s vision and, consequently, the reality of life for millions of people around the world.

At World Vision, we call her by her English name, White Jade, and she was World Vision’s first sponsored child.

The story of White Jade

In the summer of 1947 my father, Bob Pierce, was invited to hold a series of evangelistic meetings throughout China with an organization called Youth For Christ (YFC). For nearly four months, he and the YFC team traveled from one major city to another, speaking to thousand of spiritually hungry youth. In a letter to my mother dated September 9, 1947, he wrote:

We’ve now had about 11,000 accept Christ! … There is no explanation for these things except that God is sovereignly showing his power — calling out a people here for his name.

In light of these tremendous results, it is not surprising that my dad didn’t mention in his letter an invitation to speak at a girl’s school on a tiny island off of Amoy. Often it is only in hindsight that we come to appreciate a moment that changes our lives forever.

The school was run by a group of Dutch Reform missionaries, and the principal, Tena Holkeboer, invited Dad to speak in their morning chapel. As he always did, my father gave the gospel message with simplicity and great passion, and many received the Lord.

Most of the girls lived at the school, but some were local residents. Their parents allowed them to come to the missionary school for the excellent education it offered, but they did not want their children to be led away from the traditional worship of their ancestors. So when my father challenged the new believers to tell their families that they were now Christians, he had no idea what he was asking of them.

The next day when he returned to say goodbye, Tena met him at the door with a little girl in her arms. The child had obviously been beaten.

“Dr. Pierce, I want you to meet White Jade,” Tena said with fire in her eyes. “She did what you told her to do. She went home and told her father that she is now a Christian. When she refused to deny her new faith, he caned her and threw her into the street! She can never go home again. This child has lost everything!”

Shocked and dismayed, my father looked helplessly at the weeping child. She couldn’t be more than 10 or 11. “Well, you’ll take care of her, won’t you?” he finally stammered.

“I am feeding as many children as I can,” Tena answered wearily. “The question isn’t what I am going to do. The question is what are you going to do?” With that, she thrust the sobbing child into my father’s arms.

In an excerpt from Franklin Graham’s book, This One Thing I Do, my father recalled that moment:

I stood there with the child in my arms. Tears were running down her cheeks. She was scared to death, shaking in my arms. She was heavy, and my arms were getting tired. I was shaken to the core. I had never been held accountable for any consequences of my message. Now I was faced with “Is what I say true? Is there any responsibility involved?” Believe me. You do some thinking at a moment like that.

I had never been held accountable for any consequences of my message. Now I was faced with ‘Is what I say true? Is there any responsibility involved?’—Bob Pierce

The young evangelist was faced with a moment of decision. He could not stay to take care of the child, and he certainly couldn’t take her home with him. He was not a wealthy man. In fact, he had come to China on faith, and his own family was living on the charity of others while he was away.

But God doesn’t ask us to do what we cannot do. However, he does expect us to do what we can do. Digging in his pocket — so the story goes — daddy pulled out his last few yuan (about US$5) and gave it to Tena, saying, “If you’ll take care of her, I’ll send more when I get home.”

The beginning of World Vision

Even though World Vision would not officially start until three years later in Korea, my father said that this simple act of obedience was the real beginning of World Vision.

Even though World Vision would not officially start until three years later in Korea, my father said that this simple act of obedience was the real beginning of World Vision.

I have told the story of White Jade countless times, and it never fails to move me. But the truth is I always assumed that my dad had his return ticket tucked safely away somewhere.

However, as is often the case with true stories, when you dig a little deeper, there is usually more to learn. About two years ago I had the chance to interview Elmer Kilbourne, an Oriental Mission Society missionary who traveled with my dad in China. When I asked Elmer if my version of the story was true, he laughed and shook his head.

“Your father emptied his pocket, but he didn’t have a ticket. I had to sell his camera equipment and all his personal items to get him the money to get home. But then,” he went on thoughtfully, “that’s what your father did all over the world. He gave what he had and believed God to do the rest. That’s why God used him.”

Dad returned to China in 1948 for another three months of evangelistic meetings. By the end of that summer, more than 30,000 people had come to Christ. He hoped to go back again, but shortly after he left the country, Mao Zedong’s revolution closed China to the gospel for decades.

The missionaries Dad met were forced to leave, scattering to other Asian countries. Many of them would become instrumental in World Vision’s early work in Hong Kong, Taiwan, and Singapore.

Elmer Kilbourne took his family to Korea, and in 1950 he invited his old friend, Bob Pierce, to hold evangelistic meetings in that war-threatened country. Dad had just finished and returned to the U.S. when the Korean War broke out. He returned to Korea as a war correspondent and once again he was confronted with the suffering of innocent children and refugees.

Overwhelmed by the need he saw he wrote this simple prayer in the flyleaf of his Bible: “Let my heart be broken with the things that break the heart of God.”

Let my heart be broken with the things that break the heart of God.—Bob Pierce

And the rest, as they say, is history.

As for White Jade, we may never know the rest of her story. But we do know that her life was significant to God. And even though she may not know it until eternity, her faith and sacrifice planted a seed that launched a wave of compassion that continues to change the world for millions of children to this day.

I pray this story inspires you to be bold in your faith — as she was — and to offer God whatever resources or talents or dreams you have in your pocket. Who knows? Perhaps your $5 will change the world.