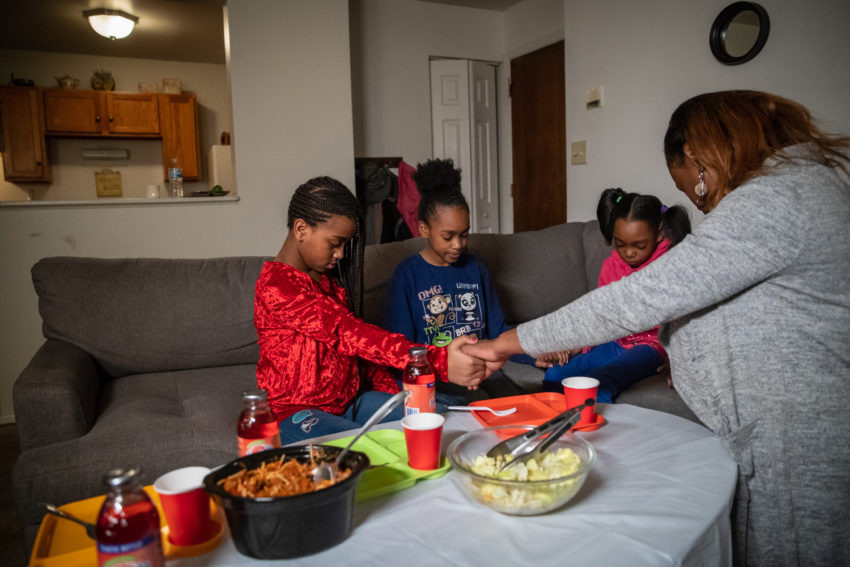 Ameyah, 11, from left, Carrli, 10, Mkenzi, 8, and their grandmother, Kim Jones, pray for dinner in their living room. Kim recently received chairs and a couch from World Vision through its partnership with her church in Joliet, Illinios. (©2019 World Vision/photo by Chris Huber)

When the call came in on March 4, 2016, Kim Jones knew something was wrong. She hadn’t heard from her husband, Brad, at the expected time that morning and had begun to worry.

Brad Johnson had worked as a delivery driver for Office Depot for 18 years. Kim says he was a “man’s man,” loved his family, and worked hard to provide for them. Each morning, when he finished loading his truck for the day’s deliveries, he called Kim to check in. This day, he hadn’t called.

Kim’s phone finally rang. It was the hospital. Brad had a seizure while on the road. They found a tumor in his head. For a year and a half, the family from Joliet, Illinois, battled the glioblastoma, praying with their church family for miraculous healing.

Kim, 48, quit her job as a chef to care for her husband. She spent much of her time at the hospital, sleeping on an inflatable mattress next to Brad’s bed. They even modified their apartment so she could provide hospice care at home. But after a roller coaster of a fight, Brad’s body succumbed to the aggressive cancer in June 2017. He was 48 years old.

Kim, her daughter, and grandkids lost their family’s rock.

“I really believed God was going to heal him,” Kim says. “After being with someone for 28 years, I’m still finding out who I am outside of him. I’m still coming to grips with, ‘maybe there’s another way God heals people.’”

Kim isn’t through grieving the loss of her husband. But thanks to strong faith, a loving church community, and some generous donors, she has hope for the future.

When Brad was sick, they lost their main source of income and accrued a mountain of medical bills. They had to ask friends for money to pay for the funeral, Kim says. After Brad died, their daughter paid Kim’s rent for three months because Kim had nothing left. Not long after that, Kim’s car was repossessed, leaving her without a way to get to work once she found a new job.

She was caring for her four grandchildren two days a week, but they had to sleep on a tattered couch. When the hot summer weather ruined the pleather cushions, they threw it out and had to settle for eating and sleeping on the floor.

Kim couldn’t afford anything. But she asked God for furniture.

People in her church family, Joyful Assembly, knew about her situation and wanted to help. Eventually, her pastors Bola and Tola Oye, who partner with World Vision’s essential supplies program based out of its Chicago warehouse, came across an opportunity to provide Kim with some much-needed furniture. Ultimately, World Vision and the church provided a sectional sofa, two living room chairs, various food supplies, and a dining room table with matching chairs.

Kim was excited that someone was willing to fill her need but had expected the furniture to be second-hand. When she saw the furniture was brand new, she started crying right in the warehouse.

“A [World Vision employee] said, ‘Did you think we were going to give you some junk?’ And I said, ‘It wouldn’t have been junk to me, compared to what I had,’” Kim says. “They’re not just giving their leftovers. They’re giving the best.”

The series of connections and events that led to this gift was an answer to her prayers, Kim says with confidence. More than something to sit on or eat at, the provision of new furniture has lessened the burden on the family. It also has freed up money to feed her grandchildren better and save for a car.

This is confirmation that God cares for the widows and the fatherless, Kim says. The furniture is more than something to sit on.

“Right now in our world, a lot of people are looking for hope,” Kim says. “These [gifts] are seeds [of hope]. The grandkids are witnessing this. People don’t just need to hear a sermon. People need to see this. One day I’ll be able to give back and will be sitting in someone’s living room that I gave furniture to.”

In spring 2018, Kim got a job in healthcare and recently started working from home full time. Inspired by the high-quality food donations she received from World Vision in addition to the furniture, Kim now dreams of starting her own nonprofit organization to serve local children living in poverty — healthy school lunches with inspiring messages tucked in the bags.

“I got a purpose now,” she says. “I’ll be able to give back. Out of my pain was birthed a purpose.”