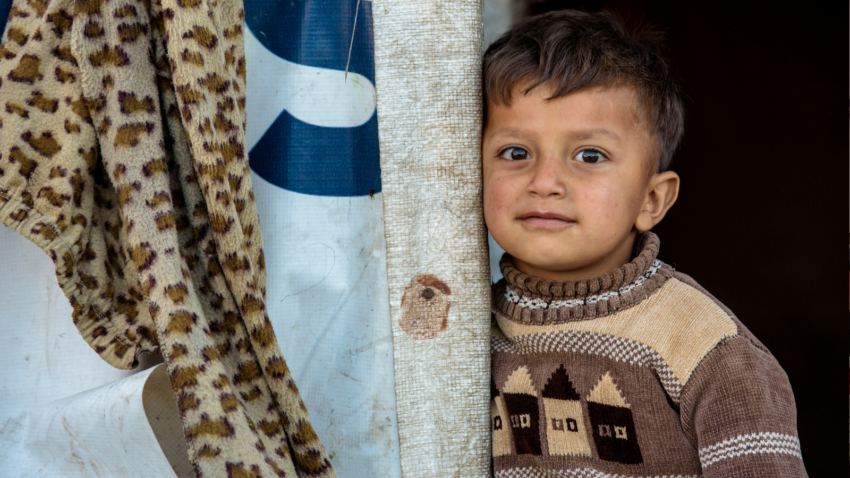 Three-year-old Rami was extremely fearful when his family first arrived in Lebanon, but now he loves attending an early childhood education program in the afternoons to get him ready for school. (©2016 World Vision/photo by Jon Warren)

My daughter Hannah turned 8 this year. Curly haired, brown-eyed, and full of knock-knock jokes. Hannah has lived in the same Atlanta neighborhood nearly her entire life. She has attended the same elementary school. Cared for by the same physician. And she has eaten home-cooked meals of familiar ingredients day in and day out.

In the same eight years, the Syrian refugee crisis has robbed families and children of an ordinary life. Over half of the country’s pre-war population — that’s something like 12 million people or more — have been killed or forced to flee their homes.

I think of the displaced Syrian children, many of whom were born to the sound of war and raised in heart-wrenching conditions where necessities like food and medical care are sparse. There is no counting on a routine or a home-cooked meal of something familiar. Hannah’s ordinary life? A dream to these children.

This is one of the longest humanitarian crises. Eight years. That’s a lifetime!

I always tell people that compassion is never a zero-sum game. It’s not only like we have “x” amount of space or bandwidth to have compassion for those who are suffering or persecuted.

I just don’t know how anyone can dispute that God cares for those who are hurting, the suffering, the oppressed, the marginalized — the refugees. Both in our own respective country and all around the world.

At this juncture in human history, one of the major crises that we have is the plight of the refugees all around the world. This situation hasn’t been solved. It hasn’t been fixed. It’s still affecting millions of people, especially women and children. It’s our Christian responsibility and privilege to continue to be involved and to serve.

I think when we live out our faith, it puts weight to our words. And the opposite is when we say we care for the hurting and suffering and we don’t embody it in our actions; it lacks credibility and substance. I think this is an opportunity for the church to respond in a way consistent with what we say we believe and what we read in Scripture.

Imagine your child turning 8 this year. Perhaps on March 15. They’ve only known crisis and trauma and instability their entire life. It matters because Syria is raising an entire generation of children who will live with this displacement and loss for their lifetime, even when and if this finally ends for them.

No child deserves to spend their entire childhood afraid and without a place to belong.

Eight years. That’s how long the Syrian refugee crisis — the biggest refugee-related crisis in modern history — has been going on. For eight years. Though the statistics paint a dire picture — 400,000 people killed, 11 million people displaced, and an unfathomable number of homes, monuments, hospitals, and places of business destroyed — the statistics don’t begin to tell the stories of the people whose lives continue to feel the devastation of this crisis every single day.

Refugees are mothers and children and fathers. They are husbands and wives. They are mechanics and nurses and lawyers and teachers. They are walking through hell, many of them having lost everything and having no real pathway for the journey ahead.

As people of faith, we are called to not only feel the pain and poverty of those affected by this eight-year war, but we are also expected to walk with them through this hell. That is why this crisis still matters — because when humanity is hurting, the hands and feet of God must respond.

We are those hands. We are God’s feet. We must carry their burdens, walk with them through the calamity, and help them find their next step, take that step with them, and hold out a light so they can see a way forward.

In 2014, as the world marked the fourth anniversary of the refugee crisis, 140 Syrian refugee children in Lebanon and Jordan between the ages of 10 and 17 wrote a letter asking the world to care. They spoke to their greatest fears:

“With all this, our fears grow day by day that the war will rage on, that destruction will intensify, and that we will lose many of our friends and relatives who are still under fire in Syria. What we fear most is our uncertain future. We are afraid we may never go home and may [be] stranded away from our country and home.”

What is their future now?

Children who were born at the start of the Syrian refugee crisis are now 8 years old; 8-year-olds then are now 16. Children who should have started kindergarten in Syria when the war began should now be in seventh grade. But instead, many are out of school, many of them having to work to help their families survive. In their letter, they talk about how good students in Syria are failing school in Lebanon.

World Vision’s remedial education programs are working to help bridge the gap in schooling for refugee children. But for how long? All these children want is a reason to continue having hope.

That’s just the latest news, not covering the millions of refugees languishing in camps and settlements in neighboring countries. I have visited these families several times and witnessed their compounding despair.

On our own, we cannot make sense of this crisis. It’s intractable, complex, and seemingly insurmountable. It’s easier to look away and focus on our own problems in our cities and nation.

But when we follow Christ, we commit to a different response — a different way of seeing, a reason to keep hoping, and a call to keep loving.

It starts with perspective. We’re looking at the suffering in the Middle East on this grim anniversary with a limited perspective shaped by our limitations of time and space — as Paul says, “We see through a glass, darkly” (1 Corinthians 13:12). But God sees from the perspective of eternity.

I believe that when God looks at the millions of Syrian refugees, he doesn’t focus on the problems, as we do. He sees these exciting developments:

Because we serve the God of unimaginable possibilities, we can’t give up. By keeping up hope and continuing to reach out in love to Syrian refugees, we live into the truth that: “What is impossible with man is possible with God” (Luke 18:27).

Imagine spending your entire childhood in a refugee camp: never attending school, never having a permanent home, and often in danger of exploitation. World Vision has provided aid to more than 2.5 million refugees since the start of the Syrian civil war. When you donate to our refugee children’s crisis fund, your gift multiplies five times in impact to support the needs of refugees!

Tell us in the comments below why the Syrian refugee crisis matters to you.