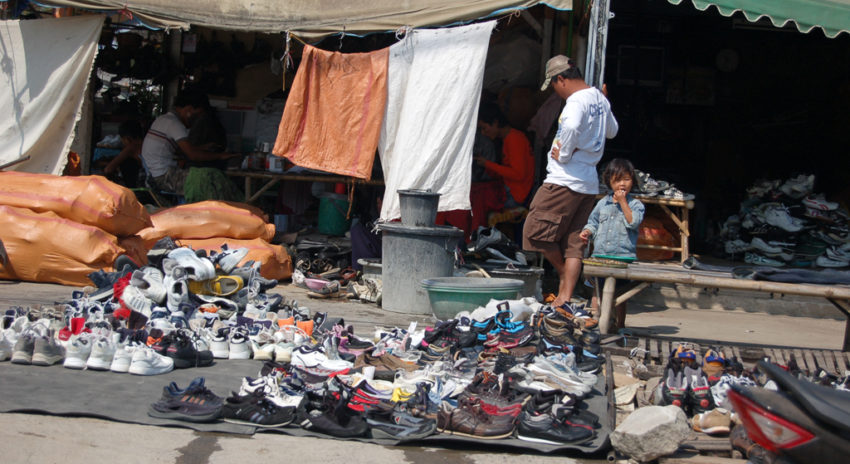 Workers clean old shoes so they can resell them in the markets in Thailand and Cambodia. (©2007 World Vision/photo by Haidy Ear-Dupuy)

In recognition of World Day Against Child Labor, June 12, World Vision has released a new report, “10 Things You Need to Know About Labor Trafficking in the Greater Mekong Sub-Region.”

Though focused particularly on Southeast Asia, the report highlights truths about exploitative labor that are relevant worldwide. How much do you know about it? Read these facts. Then, take action.

When I was 15 years old, I got my first job as a lifeguard. Before I started, I had to obtain a work permit with my parents’ consent and the consultation of my school. There were strict rules governing the hours between which I was allowed to work, as well as how many hours I was allowed to work per week while school was in session. All of these regulations were in place because I was a minor.

I resented them at the time. As an adolescent who longed to be treated as an adult — and who wanted to earn my own money — I thought the state had no business telling me when, where, or for how long I could work. It seemed deeply patronizing.

I didn’t realize that labor laws in the United States are enforced to prevent workers, especially children, from being exploited. And I certainly didn’t understand that in other parts of the world, where such laws either don’t exist or are inadequately enforced, the effects of labor trafficking are devastating. I was a middle-class suburban kid. The notion of children, my age or younger, toiling in dirty, dangerous conditions, unable to go to school while earning little or no compensation, was foreign to me.

But it happens — to hundreds of millions of children and adults around the world. It can tear apart families and ruin children’s futures. That’s why World Vision is committed to fighting it.

In recognition of World Day Against Child Labor, June 12, World Vision has released a new report, “10 Things You Need to Know About Labor Trafficking in the Greater Mekong Sub-Region.” Though focused particularly on Southeast Asia, the report highlights truths about exploitative labor that are relevant worldwide. How much do you know about it? Read these facts. Then, take action.

1. Men are trafficked onto fishing boats and held as prisoners. Though trafficking has historically been associated with women and children, men are equally vulnerable in Southeast Asia’s fishing industry. Hard, dangerous conditions on the job create a labor shortage that leaves men at risk of being held captive at sea for months or years at a time.

2. “Legal” recruitment agencies can be complicit in trafficking. It’s easy to believe that “legal” recruitment is safe, but some agencies deceive innocent people into exploitative situations. Unregulated agencies recruit children into hard labor. Brokers earn money for the workers they recruit, meaning they’ll do so without regard for whether their recruiting practices are ethical.

3. Human trafficking is a concealed, secret crime, and victims can be difficult to identify. Children and adults affected by forced labor often don’t even consider themselves victims of crime, unaware of laws that can protect them. This makes criminal investigations and law enforcement difficult.

4. “3D” jobs fuel demand for trafficked labor in Southeast Asia. The “3D” jobs — dirty, dangerous, and demeaning — are ones that local citizens don’t want, leaving them open to migrant workers. Children are often recruited for roles like household work, farming, and shrimp and fish processing. Such jobs can be very difficult, unregulated, and dangerous.

5. Vulnerable domestic workers are exploited in private homes. In Southeast Asia and across the world, slave labor in private homes is a major problem. Laws don’t keep up with this reality, and domestic servants often work without contracts, unaware of their rights. Also, because these are private properties, it’s harder for authorities to inspect these places.

6. Some factories hold workers against their will with no pay. In some instances, workers’ documents are confiscated, so they’re trapped into hard, dangerous labor with no pay for years at a time. Some employers will alert authorities of unregistered migrant workers. Because their documents were taken, these workers have no proof of their right to employment in the country — and therefore, they have no recourse against the employer who has exploited them.

7. Some victims of labor trafficking are exploited not in foreign countries, but on their home soil. Trafficking does not need to involve crossing an international border to be considered a crime. Children whose families live in poverty are often pushed to migrate to urban centers, where they’re subject to exploitative labor. But most policy responses in Southeast Asia — and worldwide — have focused on cross-border trafficking rather than internal trafficking.

8. Trafficking is a dynamic crime; brokers are flexible and inventive. Although not all brokers are criminals, some look for and prey upon people’s vulnerabilities — such as poverty, low education levels, and dysfunctional families — to recruit for trafficked labor. The laborers they recruit often begin working under substantial debt to the broker.

10. Everyone can help combat labor trafficking. Labor trafficking is highly dependent on the concept of supply and demand. It happens when fair labor practices are undercut by cost-cutting measures that encourage trafficking. The international business community can help fight this trend. So, too, can American citizens. Our government plays a powerful key role in fighting the global conditions that produce labor trafficking and other forms of exploitation.

Contact your members of Congress and ask them to support the Trafficking Victims Protection Act. This law is the cornerstone of U.S. policies against human trafficking and modern-day slavery — but it must be reauthorized every few years. The current legislation expires on September 30, 2011, so act now!