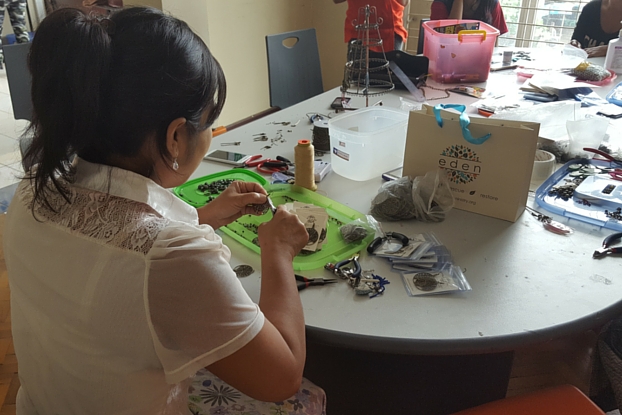 Today, July 30, is World Day Against Trafficking in Persons.

Pyone is a survivor of human trafficking. After four years trapped in another country, today she is reunited with her family, working to support her daughter, and this past spring told her story so other young women might avoid her horrible experience.

A neighbor persuaded 30-year-old wife and young mother Pyone (her name has been changed to protect her identity) to work at a shop along the China-Myanmar border. When she arrived, she didn’t find a shop, but a forced marriage.

“She (the neighbor) told me that I would earn more money with a better job at her sister’s shop in Muse Township, which is in northern Shan state,” Pyone recalls.

Back in 2011, Pyone worked at a grocery shop earning 2,000 kyats (US$2) per day. Pyone was the main breadwinner for her daughter and elderly parents ever since her husband left the family to go find work and never returned. Their daughter was only a year old at the time.

One of Pyone’s neighbors, Daw Nge, tried several times to persuade her to work at a shop along the China-Myanmar border. At first, Pyone refused the offer, but the woman kept promising a good salary, which would allow her to support her now 10-year-old daughter and cover the cost of her elderly mother’s medical care.

When finances hit an all-time low for Pyone, she decided to leave her job at the grocery store for the one in Muse Township along the border. She did not inform her family of her decision, but she also didn’t think she would be separated from her family.

When she arrived across the border, a Chinese man picked her up with a motorbike. “I thought my workplace would not be so far from the border since I was picked up by motorbike,” recalled Pyone. However, she was taken to Gway Min city then transported to a small village by car. At that point, Pyone realized that she had been deceived and there was no shop — she had been trafficked to China.

She had been sold to a Chinese man to marry.

In Myanmar, many men, women, and children fall victim to forced labor and sex trafficking. In the U.S. State Department’s most recent Trafficking in Persons Report, the country has been ranked Tier 3, indicating that it does not fully meet the Trafficking Victims Protection Act’s (TVPA) minimum standards. However, the Government of Myanmar has been working with the U.S. government to improve its current standards.

World Vision’s Burma (Myanmar) Anti-Trafficking in Persons (A/TIP) project, funded by the U.S. State Department, is an example of governments agreeing to address issues related to forced labor and sex trafficking. The project provides comprehensive recovery services and improves victims-centered investigations and prosecution of human trafficking cases through training and support to police, judges, prosecutors, and those involved in case management.

In Pyone’s situation, she tried to escape twice, but was unsuccessful both times. After her second attempt, her husband’s relatives beat her severely. Desperate, Pyone tried to kill herself by getting sick. One cold winter morning, she poured freezing water over her head from a dug well in front of the house.

Three years and eight months later, a Chinese neighbor helped Pyone send a letter with her contact information to her family in Myanmar. A month after that, Chinese police came, searched the house, and rescued Pyone. She stayed in a Chinese shelter for three months before finally being transferred back to Myanmar.

World Vision’s A/TIP project provided Pyone with the transportation and short-term shelter needed to return home from China, as well as support to ensure that her long-term shelter in her community was adequate and safe. When she returned home in 2015, she was reunited with her daughter, now 15, but sadly learned that her parents had passed away while she was in China.

“I didn’t want other young women to face the same horrible experiences like me. That is why I tell my story to other young people to educate about human trafficking,” says Pyone.

At first, Pyone was ashamed and reluctant to share her experiences. She saw her story as pathetic and humiliating, especially since victims of trafficking are often seen in her culture as criminals rather than survivors. Fortunately, after receiving care and assistance from the project, Pyone was inspired to speak up.

This past May, Pyone spoke at the National Survivors Gathering Event, which was coordinated by the A/TIP project and World Vision’s Regional End Trafficking in Persons project. The annual event is meant to strengthen the resilience of survivors as well as sensitize those working to assist them about trafficking. On the last day, Pyone, and other survivors shared their stories publically in front of international organizations, civil society groups, and local media.

Today, the project has helped Pyone get a job with Eden Ministry, an organization that employs former sex workers and other vulnerable women, providing them with job training on how to make jewelry and beads.

Daw Nge, Pyone’s former neighbor and broker, has been sentenced to prison for human trafficking.

Since 2001, World Vision has been at the forefront of anti-trafficking work in Myanmar. The A/TIP project, still in its beginning stages, so far has assisted 20 victims of trafficking with plans of serving more than 160 by September 2018.

Today, July 30, the World Day against Trafficking in Persons, we highlight the story of one survivor who was brave enough to share her experiences in hopes to make a difference in the lives of others.

Additional reporting by the staff of World Vision Myanmar.

Join us in fighting for girls subjected to abuse, child labor, sex trafficking, child marriage, and other offenses. Help girls and women like Pyone today.