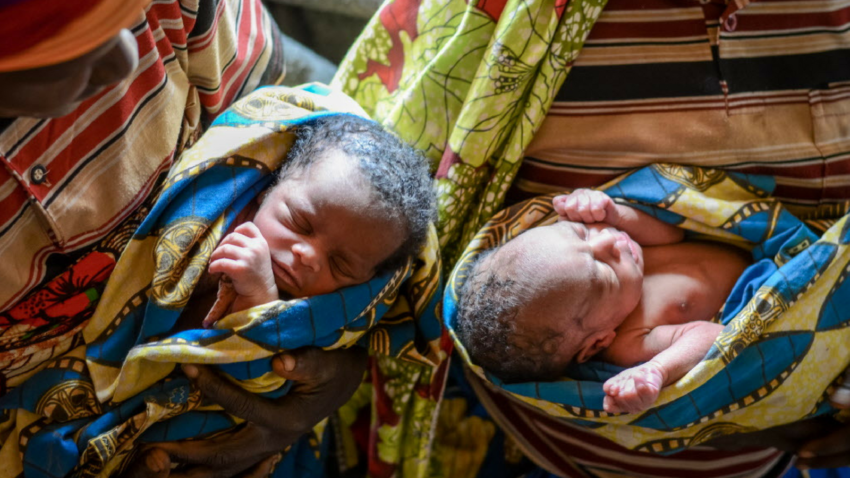 Twin infants — a boy and a girl — born in a maternity clinic in Burundi. (©2017 World Vision/photo by Mark Nonkes)

Being a twin can be fun … but also sometimes frustrating. But for parents of twins, it’s twice the work!

For National Twin Day, celebrated the first weekend in August, read what it’s like to be a twin and how having twins can be extra difficult for many parents around the world.

I’ve been a twin my whole life.

Today, I live in Washington state and my brother lives in Florida, so we aren’t as defined by our togetherness the way we used to be growing up. But whenever people find out that I’m a twin, certain familiar questions come up.

How do you tell each other apart? Well, I know I’m Matthew so he must be Mike!

Can you feel each other’s pain? Nope. Not even a little.

Do you know what he’s thinking? Thankfully, no. But I’ve known him longer than anyone else, so I can sometimes guess.

For some people, that “twin connection” is stronger than it is with us, so I can’t discount it completely. (If you’re a twin and have a different experience, please share it in the comments below!) There are many ways in which my brother and I are similar, but plenty in which we’re different too. Mike is only 7 minutes older than me but behaves in a classically oldest sibling way, while I very much tend toward the temperament of a middle child.

There are some really great things about being a twin. For one, you’re never alone. As kids, we always had someone to play with. My first five international trips were with him. We got certified to scuba dive together, learned to drive together, and when we went to different colleges, we messaged each other daily.

On the other hand, you’re never alone! It wasn’t until I was a senior in college that I had my own bedroom for the first time in my life. No one in the world knows you as well as close family, and no one in the world can get on your nerves the way your close family can. Imagine these people being just like you and knowing every little thing about you.

We were born first to my parents; another brother and a sister would come later. From what I hear, I think my parents loved having twins first — my dad tells how he would hold each of us in one hand, and we were smaller than his forearms. But having a first child is hard enough for new parents. It couldn’t have been all fun and games.

And it wasn’t. While we were still infants, my dad was in a bad car accident, and at first, they weren’t sure he would make it. My mom was alone with twin baby boys. She had friends and family around her to help, he had good doctors, and everything turned out fine. But it makes you think. Everything could easily have been very different.

For many parents worldwide, the kinds of scenarios I’ve imagined off and on throughout my life of what could have been are real. In my travels with World Vision over the past few years, I’ve met a few moms who have to get by without their husbands longer-term than my mom had to.

In Armenia, I met my sponsored child Hovhannes. During our visit, both of his parents were with him, and we got to spend a few hours getting to know each other. But it was February. The dead of winter. During the warmer months, his father goes to work in Russia. Eight months of the year, he’s gone, leaving Hovhannes’ mom alone and without much support.

In Cambodia, I met Reatrey. Her mom had four to five kids if I remember right, and she was pregnant with another. And though none were twins, I could tell it was too much for her to handle. Her husband had gone to Thailand to work and send back money, but the job he had gone for had been a trick and he was trafficked, stuck in another country with no money to send home or to buy his way back.

Though neither of these two kids I met had a twin, they were examples to me of how much harder life is without a parent. There’s an expected ratio: two parents, one child at a time. When either change, things get more difficult. Out of balance.

Not all parents have the support their kids need, and twins cut whatever support is available in half. Sometimes a parent is gone. Sometimes there isn’t enough money to send two to school or enough food to feed two more. Many parents can use a hand-me-down system between their kids, but not with twins! We’re the same size.

My brother might annoy me once in a while, but we’ve led blessed lives when it comes down to it. For us, all of the what-might-have-been imaginings are only that: imagination.

But many parents who have twins struggle with that doubling: double worry, double responsibility, double costs.

When you sponsor a child through World Vision, you can be that extra support a mother needs while parenting double.

Choose a child to sponsor here.