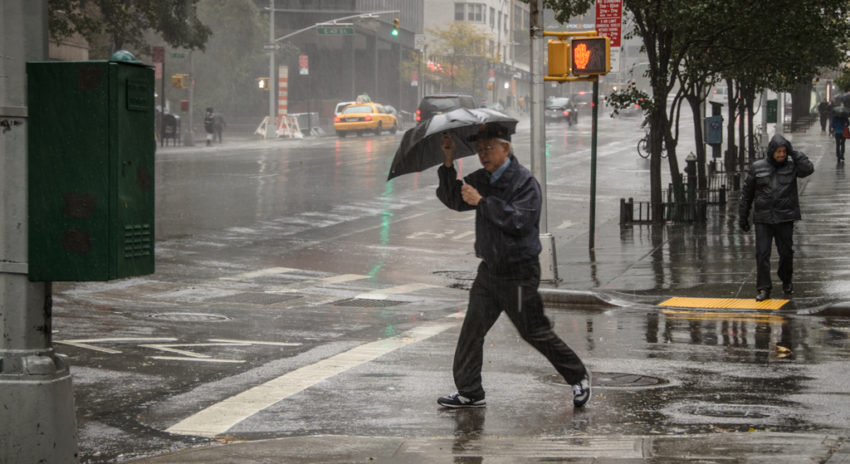 Hurricane Sandy hit land Monday night and continued its trail of destruction along the U.S. East Coast. World Vision staff members are ready with emergency supplies for areas that have been hit hardest. See updates here as we track the hurricane and our disaster relief efforts.

About 25 employees from the University of Pittsburgh Medical Center (UPMC) helped assemble more than 500 hygiene kits at World Vision’s warehouse facility in Pittsburgh today. The kits are worth about $8,000, paid for by UPMC.

The kits will be shipped tomorrow to assist survivors of Hurricane Sandy.

Molly Crooks, a UPMC senior associate in human resources, was among those who volunteered to do the kit build.

“The most amazing part for me was that we wrote the personal notes that went into the kits,” Molly says.

“The main message was that you are cared about more than you realize. Our thoughts and prayers go out to you during this truly difficult time in your life. Just remember that you are stronger than you think.

“You don’t know who is going to get them, but you just hope that in the wake of this amazing disaster that it puts a smile on somebody’s face,” Molly says.

Why did Molly volunteer?

“It hit so close to home. I can’t imagine the devastation they have, and I just wanted to help in some way quickly. We can donate money, but I felt like I really needed to do something hands-on to make a difference. This was perfect. Whoever gets my kits will know there was a personal connection from someone in Pittsburgh.”

“It is a race against the clock. People are freezing, children are getting sick, and families need cold weather supplies right away,” says Phyllis Freeman, World Vision’s domestic disaster response director. “Our relief teams are moving as fast as we can, especially since there is this Nor’easter heading our way, but families need many more blankets and coats in this area.”

Over the weekend, World Vision distributed hundreds of blankets, winter clothing, and emergency food supplies to families and children in several areas of New York City.

In Far Rockaway, New York, father of five Omar English told World Vision’s response team that his children go to bed at night fully dressed because they are so cold. “I’ve been wrapping them up in blankets at night to try to keep them warm,” said English.

World Vision is already preparing a long-term disaster response targeting families who need assistance rebuilding their homes. In the meantime, the response team says its first priority this week is protecting families, children, and senior citizens at immediate risk from the cold weather.

World Vision has ordered an additional 9,000 blankets, and this week our teams will continue distributing winter clothes, emergency food kits, and personal hygiene products to families through church partners.

Freeman says World Vision’s strategy is unique in that we partner with churches in local areas to help distribute relief supplies.

“World Vision has partnered with hundreds of churches in the New York area before, and we are heavily relying on them now to respond to Sandy survivors,” said Freeman. “Our response teams are capable of reaching tens of thousands in multiple states, thanks to churches that become our hands and feet in times of disaster.”

Following those meetings, Betsy emphasized the urgent need for cold weather supplies and more help to families who can’t afford to rebuild their homes or replace essentials destroyed in Hurricane Sandy.

“People who are of less means have been severely affected,” Betsy said. “They essentially had a tidal wave hit them.”

Driving throughout the island, she saw boats piled on each other, homes swept off their foundations, and curbsides loaded with sofas, tables, and electronic equipment — anything that was destroyed by floodwaters.

Fuel shortages significantly hindered relief and assessment efforts throughout the storm-damaged Northeast. Betsy said some people waited more than two hours to buy $20 worth of fuel.

“Gas is a major, major issue,” she said.

As part of a World Vision team tasked with determining the needs of the most vulnerable people, Betsy visited a Staten Island high school serving as an emergency shelter.

More than 300 residents gathered there, many clinging to their pets. People were dazed, and some seemed disoriented by it all, she says. At one point, a family arrived still soaking wet, having finally escaped their flooded home.

“It’s shocking, but also we actually had a hard time finding these harder-hit areas. There are just parts of the island that are completely devastated,” Betsy says.

World Vision plans to continue community recovery efforts for up to three years.

With this weekend’s New York City marathon now canceled due to significant storm damage from Hurricane Sandy, many marathoners are choosing to volunteer with aid organizations conducting disaster relief efforts in the city.

Today at the World Vision field site in the Bronx, 16 marathoners from Team World Vision assembled hundreds of emergency food kits for Hurricane Sandy survivors. The 300 food kits each contain enough food to feed a family of five for a day.

On Sunday, rather than running, marathoners are also invited to spend what would have been race day with World Vision’s response team at a food distribution in Staten Island, an area severely impacted by the storm this week.

“It’s making me feel very happy and pleased that I can do something,” says Tim Fearn-Wannan, who traveled from Melbourne, Australia, to run for Team World Vision. “I could have sat in the hotel room. I could have gone sight-seeing and probably would have still felt pretty empty. But this is a good feeling that there are people out there in a pretty bad situation at the moment, and we’re doing our small part to help out with that.”

Despite continuing problems with transportation, lack of electricity, and fuel shortages, aid is reaching some of the hardest-hit communities lashed by Hurricane Sandy.

Today, World Vision began relief distributions in Far Rockaway, New York — a peninsula almost wiped off the map as water surged in from the Atlantic Ocean and Jamaica Bay.

“All the stores are closed; there’s no power, no water, nothing,” she said. “People were saying to us that we were the first people there to distribute supplies.”

World Vision distributed relief supplies from a truck in a local park because no usable distribution facilities were available.

The relief team was briefed to expect 30 to 50 families, but as word of the distribution spread, the line of people waiting for assistance got longer and longer.

The blankets proved especially popular due to the chilly conditions.

“I have to actually hold my daughter so that she could keep warm in the last couple of nights,” one resident said.

Karon MacFarlane, a World Vision community engagement specialist who helped supervise the distribution, said the mood was overwhelmingly one of gratitude.

“Especially people with children were saying thank you,” she said.

For those affected by Hurricane Sandy, the long process of rebuilding their lives has begun.

World Vision has come to the aid those affected by the storm by supplying food kits, flood clean-up kits, hygiene kits, blankets, tarps, and other essentials like warm clothes and shoes.

“You’re the first people to help us. Thank you,” said one resident at World Vision’s supply distribution in Far Rockaway, New York.

World Vision expects its relief efforts to continue in affected areas for up to three years.

Rick Miltimore, World Vision’s national director of resources and relief for U.S. programs, says a key part of the response will be partnering with churches and other faith-based organizations already working among the poorest populations in affected areas. This will enable the organization to target assistance where it is most needed.

World Vision already has strong relationships with about 700 churches and other partners in the Northeast, who have an intimate knowledge of the needs in the vulnerable communities they serve.

After meeting immediate needs, World Vision’s next priority is to supply building products such as insulation, siding, and roofing materials to repair homes and community buildings.

More than 7 million people are without power and over 45 have been killed in the wake of Sandy’s destruction. While the worst of the storm is believed to be over, it’s likely that the death toll will continue to rise as rescue crews work their way through the hardest-hit neighborhoods.

World Vision staff members are simultaneously working to distribute emergency relief kits and supervise the clean-up of our warehouse in the Bronx, which was under about four to five feet of water.

Tim Reeve, World Vision’s general manager at our office in New York, says up to a third of the stock in the warehouse has been destroyed, though much of the supply pre-positioned for emergency relief operations remains intact.

“[The] loading dock is filled with about four to five feet of water right now,” says Tim. “The East River, which is at the end of our street, started coming over its bank and the water just flowed into the building. There’s boxes and debris all over the place.”

Hurricane Sandy hit land Monday night and continued its trail of destruction along the U.S. East Coast. Swells of up to 13 feet and 80-mph winds have battered the New Jersey coast and New York City.

World Vision staff members are ready with emergency supplies for areas that have been hit hardest. Our teams have sent several hundred blankets and emergency kits from our Texas storehouse to be distributed to families affected by the disaster.

As World Vision works to respond to people in need of assistance, our team members also face the challenge of being affected by the disaster themselves. For example, our office in New York City was forced to evacuate Monday night as flooding threatened to close bridges and leave staff stranded in the building.

“It’s not ideal, but we felt it was necessary to evacuate our staff and seek shelter closer to Manhattan so we wouldn’t be stranded ourselves,” said Phyllis Freeman, World Vision’s domestic disaster response director.

“We unplugged electrical equipment and put all the relief supplies up higher, but we’re not sure when our response teams will be able to access the site if the river continues to rise.”

While the flooding in the New York office is a setback,  it won’t interfere with World Vision’s ability to respond, thanks to our pre-positioned supplies across the nation.

“Hurricane Sandy could be one of the most devastating storms we’ve responded to in decades,” says Phyllis Freeman, World Vision’s domestic disaster response director. “We’re asking our supporters to pray that the impact isn’t as severe as some forecasters are predicting, but World Vision is prepared to respond if we do see the worst.”

Hurricane Sandy is expected to touch down on the U.S. East Coast sometime Monday evening or early Tuesday. The storm has already ripped through the Caribbean with 80-mph winds and torrential rains.

As Sandy arrives in the United States, it will converge with two cold fronts from the north and the west, creating what some are calling “the perfect storm.” Damage could be catastrophic.

A state of emergency has been declared throughout the region, and subways, buses, and commuter trains have been shut down in New York City. Coastal areas have also been evacuated.

Consider making a one-time donation to help us respond to this disaster. Your gift will help us respond with life-saving assistance in the aftermath of the storm, such as food kits, blankets, hygiene kits, clean-up kits, and more.