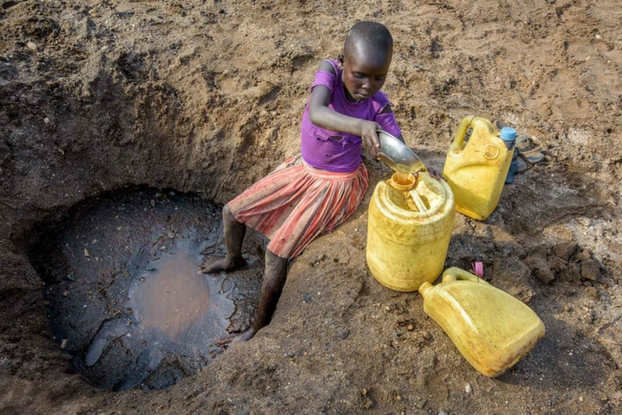 Kararok scoops dirty water from a hole dug into a dry riverbed in Kenya. (©2016 World Vision/photo by Jon Warren)

663 million people don’t have clean water. It’s a difficult number to imagine. But it’s time to start putting real faces to this number.

Start with one. Because one more child with clean water brings 663 million down to 662,999,999. And one by one we can bring clean water to children across the globe.

See a great place to start!

663 million people in the world lack access to clean water. That’s more than twice the population of the United States! More alarming is the fact that preventable disease caused by drinking contaminated water kills more people each year than war, HIV and AIDS, and traffic accidents combined.

When we read numbers like 663 million, we have a tendency to shut down; we cannot wrap our minds around such large numbers. We imagine crowds, or if you’re like me, you imagine de-personalized data charts, but we cannot comprehend 663 million individual human beings who have lives, families, neighbors, jobs, dreams, fears … but that is the reality. 663 million real people do not have access to a basic need that I so often take for granted.

We know how to bring clean water to those who need it. World Vision empowers and equips indigenous people groups to plan and execute the construction of the most appropriate water source for their community. You would be amazed at the variety of methods used to bring life-giving water to the poorest regions in the world:

If we were walking down the street and saw a child drowning, none of us would keep walking. We would intervene. We would do everything we could to rescue that child. It’s time to put faces onto each of the 663 million people in the world lacking a survival necessity, and take action. We cannot choose to just keep walking when it is within our power to do something.

Our Global 6K for Water is coming up. This is a really fun, engaging way for you, your family, your friends, neighbors, and co-workers to show up and take action. Your registration cost will provide water to one more child, and you will have a blast doing it (Trust me. I participate in this event, and it is something you do NOT want to miss out on). Your decision matters. You really can make a difference, and you really can be a part of the solution.

When you walk or run our Global 6K for Water, every step you take is one that children around the world don’t have to! End their walk by signing up for yours today.