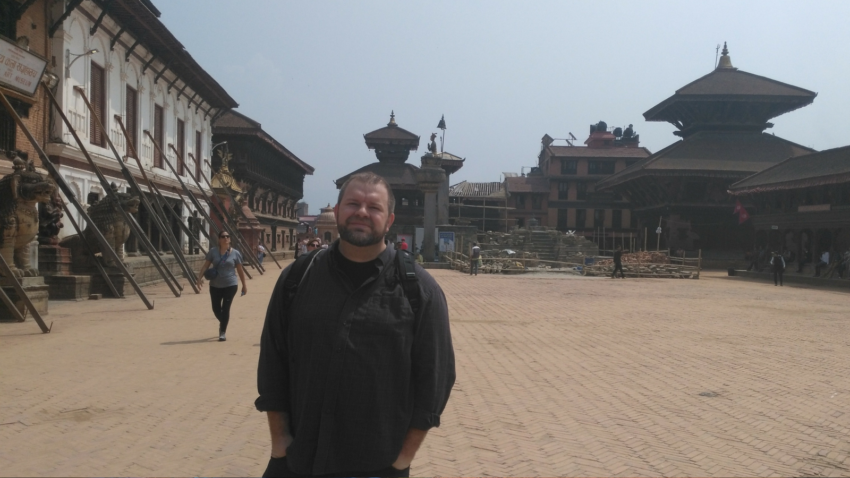 Two years later, Matt Stephens returns to Nepal and the place he stood during the 2015 earthquake. (©2017 photo courtesy of Matt Stephens)

In 2015, our colleague Matt Stephens was in Nepal during the devastating earthquake. Two years later, he returns to witness how the disaster is impacting children and leading to a rise in hazardous child labor.

This World Day Against Child Labor, join us in prayer and action to end child labor!

Descending to land in Kathmandu this past March was a somewhat anxious affair.

I had not set foot in Nepal since the week of a massive earthquake nearly two years prior. On April 25, 2015, as I was wrapping up a fruitful week of child protection strategy and planning work with my colleagues in Nepal, the country was rocked by 7.8-magnitude earthquake, its worst disaster since 1934. In total, the earthquake claimed the lives of almost 9,000 people and injured another 22,000 — leaving homes, businesses, and families devastated in its wake.

Now, two years later, I journeyed back to Nepal to see the long-term impacts of this catastrophic event on children and to witness the progress of the nation’s slow and determined march toward recovery.

The scene I left in 2015 was one of frantic action, panic, and confusion by people who had watched the city fall to pieces. I didn’t know how I would feel revisiting the place where I had stood when the earth began to shake or to see those places that had collapsed around me.

This trip, however, had a mission far more important than my own personal closure. For this trip, I was going to assess the effects of the earthquake on children and families and how its destruction had contributed to an already challenging reality in Nepal: the use of hazardous child labor.

Even prior to the earthquake, Nepal had one of the highest rates of child labor in the world. Of an estimated 7.7 million children ages 5 to 17, the International Labor Organization estimated that 1.6 million (almost 21%) are engaged in child labor. Children across the country — including the population-dense urban Kathmandu Valley — have for years been employed in dangerous work in places like brick kilns, textile and garment factories, restaurants, and night clubs. Children also work on the crowded and polluted streets of Kathmandu as bus attendants, street sellers, or even as beggars.

Much of this work is dangerous, degrading, and dirty — some of it forced — and almost all of it impedes children’s ability to attend school.

Urbanization, the movement of rural children and families to urban centers for work, was a growing phenomenon in Nepal before the earthquake. But when the homes of tens of thousands were destroyed and livelihoods disrupted, more and more families were forced to migrate. As a result, the city saw a rapid expansion of population that it was in no way ready to handle. Housing, infrastructure, and the economy were not prepared to absorb the many who flocked there seeking a new start.

New migrants settled in small slums and informal settlements or rented single rooms for their family in another’s home. Lack of water and other infrastructure in many cases required that it be purchased from private providers — at up to 10 times the standard rate. Desperate families in need of income looked for any opportunity to grow their household income and provide for their families, including sending their children to work.

In this light, the Kathmandu Valley has seen a surge of child workers and laborers. From an employer perspective, the benefits of employing children are clear: lower wages, fewer complaints about working conditions, and children’s general lack of awareness about their rights, which makes them easier to exploit. Likewise, the deterrents are few: an overburdened government with limited bandwidth to conduct labor inspections, desperate families with no option but to send their children to work, and a society that seems to tolerate the reality of child labor.

Though these challenges for Nepal’s children following the earthquake may be a present reality, they do not dampen our hope for a stronger, more resilient Nepal for children. In the Kathmandu Valley, World Vision is working on an urban-focused program to address the challenges that face new migrants to the city.

World Vision’s new Kathmandu Valley urban program aims to build employable skills in vulnerable families, increase the value of their work and products, and link them to decent jobs. For children, we’re aiming to get working children out of hazardous work and back into school with catch-up programs, weekend schools, peer tutoring, and support with books and fees.

Across the city, we’re challenging the tolerance of child labor: increasing community awareness of the problem and better alternatives, promoting child labor-free businesses, and holding employers accountable for creating safe and decent work environments for children of legal-working age. In all this, we work with the government to improve protection systems for children from all forms of violence, including hazardous child labor.

On this World Day Against Child Labor, we celebrate all of the work that has contributed to a reduction of child labor by more than a third since 2000. The U.N., government donors like the U.S. Department of Labor-ILAB, foundations, private donors, and partners around the world have contributed to this collective success. However, the situation in Nepal illustrates the long road ahead and the complexities of the challenges we face.

Pray today that the U.S. and other governments commit to a continued investment in a world with no child labor and a future in which children are free to learn, play, and grow.

Today, join us and show your support for U.S. investment to end child labor. In less than two minutes you can make one phone call to share that you do not think this funding should be eliminated in the 2018 budget. Everything you need to know to get started is right here.

Every phone call is counted and your voice will make a difference!