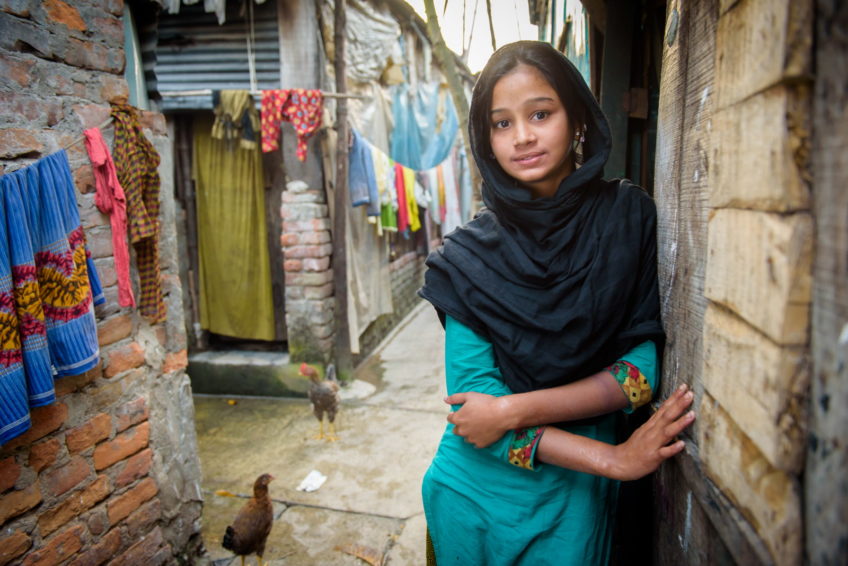 Tania Akter, 16, was forced to drop out of school about three years ago so she could provide for her younger sister and father. (©2017 World Vision/photo by Laura Reinhardt) 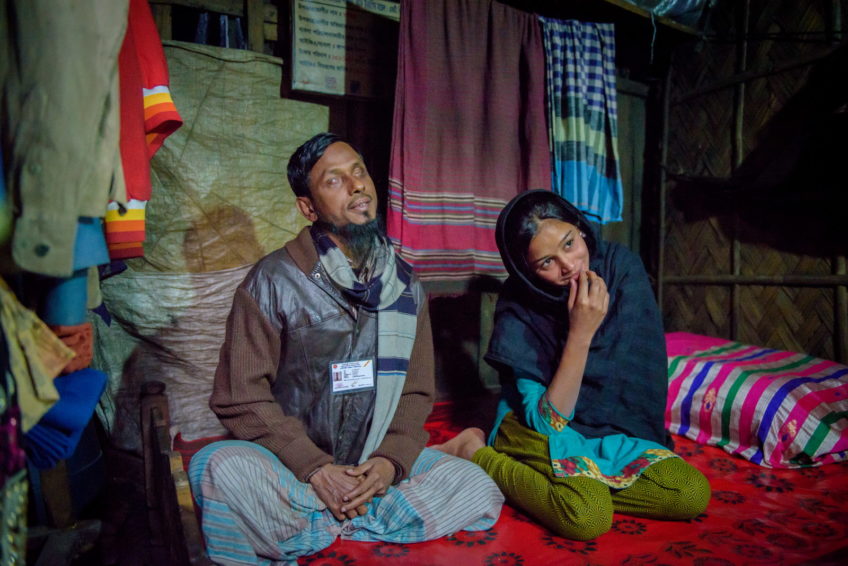 Her dad used to work selling cosmetics at a traveling fair, but nine years ago, some men mugged him, broke his arm, and then threw acid on him. Within 10 minutes he went blind. (©2017 World Vision/photo by Laura Reinhardt) 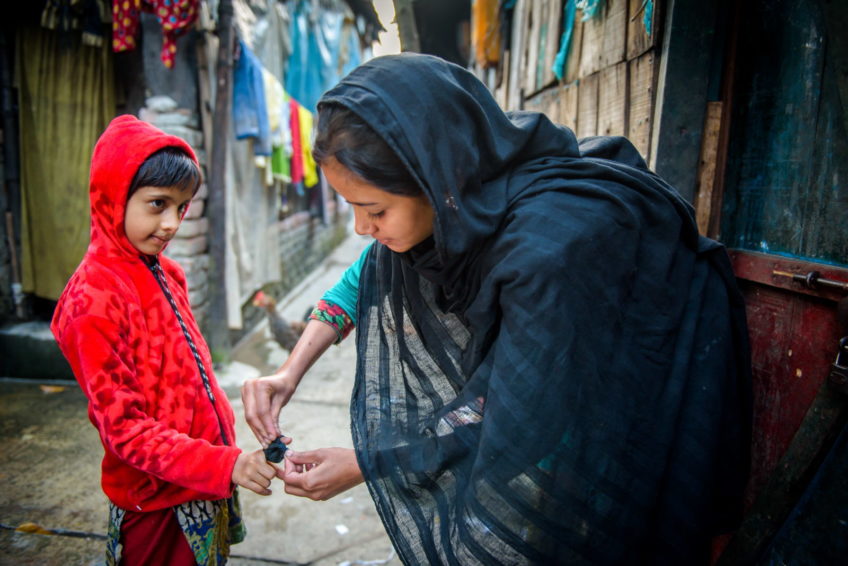 Tania bandages the finger of a neighbor child. She longs to be a nurse to help others. (©2017 World Vision/photo by Laura Reinhardt)

She closes her eyes, and the grace with which the 16-year-old carries herself day-in and day-out now directs every part of her body as it makes time with the music, emotionally transporting her far from her poverty-stricken neighborhood. Her fingers and arms rhythmically float through the air, and she turns in circles as her head, hips, and feet follow direction from the song pumping through her veins.

The music transforms her, freedom replacing her burdens and joy replacing her hardships. For a moment, she lets down the composure that consumes her life, and she doesn’t hear the people who call her names or the boss who yells at her to work more. She doesn’t worry about how she will provide for her father and 10-year-old sister or what she will cook them for dinner. She doesn’t feel the pain she endures working each day but rather simply the song in her heart.

She just dances. To a favorite song. Like so many other 16-year-old girls enjoy doing.

When Tania was 5, life felt more normal. Her mother was in their home taking care of her and her sister, Suriaya, who was just a baby at the time. Her father, Somir Hawlader, worked selling cosmetics at a traveling fair.

Tania didn’t have to work. She could play with her friends. She even used to go to school.

But nine years ago, while Somir was working, men robbed him. And it wasn’t enough to just rob him and move on to another victim. Instead, they brutally attacked him.

“They snatched me and threw acid on my eyes,” Somir says. “They broke my arm and hit my head. After about 10 minutes, I felt my eyes becoming paralyzed, and I couldn’t see.”

He couldn’t work. He couldn’t care for his family. Now he relied completely on others, and it took its toll on his wife. She left him a year later, leaving Tania, then 6, to run the house and care for Suriaya, who was just 18 months old.

The struggle to provide

As a child Tania stepped up, and even while attending school each day she would go to the market to buy food and cook it. Her favorite meal to make is dim bhuna, or egg curry. She also learned how to do all the cleaning, laundry, and household chores.

The family needs between US$37 and US$75 a month to cover all their expenses. Somir receives a government ration of about US$6.25 a month because of his disability, but it’s not enough to support his daughters, so he turned to begging on the streets. He typically begs three days a week and earns about US$2.50 a day.

He has to be careful though, as the government has tried to curtail begging. “I can’t go on the street, or they will catch me, so I am afraid of how to provide for my family,” Somir says.

The government helps people who beg by instead providing them with cups to sell tea on the streets. It’s a great idea in theory, but Somir isn’t able to see the currency people give him to make change or know if he’s being cheated, and he can’t tell how much tea he’s using in the water or how full the cup is when he pours.

“If I would like to sell tea, I would need to take my younger daughter,” he says. “I can’t take my older daughter because people will stare at her, and I’m concerned for her safety.”

It’s a common concern for parents of girls in Bangladesh, where women are seen as inferior, treated differently than men, and often married off younger than the legal age of 18. To avoid bringing unwanted sexual attention to Tania, he takes Suriaya, now 10, but says, “she would miss school.”

She usually is out of class one day a week, which seems nearly harmless, but multiplied week after week, year after year, Suriaya will quickly fall behind and may eventually drop out. Tania doesn’t want to see her sister leave school like she finally had to three years ago.

“I miss school. I liked to study Bangla — I like the rhymes and poems,” she says. Tania can still read, but very slowly and says, “I have forgotten many things.

“I want to be a nurse. I will feel good when I’m able to help the children here and provide treatment support, and if they get cut, I will help them get dressings.”

Work instead of school

Instead of school and progressing toward becoming a nurse, Tania spent many of her days peeling piles of icy shrimp — squatting for hours with little rest in order to avoid sitting on a dirty, wet cement floor at a local fish depot.

“I get pain in my knees and in my waist,” she says. She could stand to take a break and help relieve the pain, but in eight hours of work, she only took the equivalent of about 20 minutes worth of breaks throughout the shift.

Beyond being laborious, the work was also harmful, as there’s an incredibly sharp part of the fish that is like a razor blade. “I’m really sad when I get cut with the saw of the fish,” Tania says. “I get severe pain.”

The shrimp are in large barrels of ice, so she also struggled to keep her hands warm as she worked. “I put water in a pot, and when my fingers get hard, I dip them in the water,” she says.

Even at room temperature, the water helped bring some small relief to her chilled hands. It was important she kept her fingers warm, not just for comfort or health but because when she lost some of the feeling and they were hard to move, it increased the likelihood of getting hurt. “There’s more chance to get cut when I can’t peel properly, so then I get cut almost every time,” Tania says.

During the off-season, she worked for just a few hours, a couple days a week to make between US 50 and 75 cents a day. During the busy season, a boss would come to her home and wake her in the middle of the night — if that’s when the shrimp arrived — and she had to get up and go in. For her overnight work of about seven to eight hours, she might earn about US$1.85.

“When they bring enough shrimp, I have enough money, but when they don’t, I lack,” Tania says.

A hope to learn

Fortunately, the monotony of peeling shrimp didn’t peel away at Tania’s dreams.

To help with her and other children’s dreams, World Vision began a Child-Friendly Learning and Resource Center (CFLRC) in May 2017 in Tania’s community.

The center is part of a new project called Jiboner Jannya, which means “well-being of life,” and aims to help about 51,000 adults and children like Tania in the region. The program is working to protect some of the most vulnerable children who are at risk of the worst forms of child labor, abuse, neglect, and exploitation.

Program facilitators use games, skits, and group activities to teach children life skills, such as how to work past disagreements by finding solutions that benefit both parties. But children also learn about their rights to protection and the dangers of labor, trafficking, and abuse, says Augustine Amal D’Rosario, the area coordinator for the project.

Tania and other children attend the center for a few hours each day, but that cuts into their work and other household responsibilities, so in leading by example, World Vision staff also work with the children’s employers and families to find solutions that work for everyone.

Provash Chandra Biswas, the project manager, explains that staff members work hard to educate employers about why children need to attend the center. They gain their support and agreement to allow the kids to attend for a small part of the day.

But with fewer hours to work, that can harm the families, so staff also need to work with parents like Somir to teach them how the center will benefit their children and even why kids need to learn and be protected. By spending time with the parents to educate them about the program, answer their questions, and also learn about their struggles, families feel empowered to send their children to the CFLRC.

“I like the programs. Whenever World Vision runs a program, they take care of their children. They ensure their participation and make sure they reach home safely,” says Somir, speaking about his experience with Suriaya attending a different program when she was younger.

Additionally, World Vision provides income assistance to help families compensate for the wages lost by their children attending the center in the near term. But that’s just a temporary solution. To see long-term change, parents learn new job skills that can help them create better, sustainable livelihoods for their families as well.

At the center, Tania was learning with the hopes of catching up on her education so she might re-enter formal schooling. But as she was studying, she became too old to go back, so now she has new dreams of building a tailoring business. In addition to educational opportunities, the CFLRC also provides vocational training for older children so they can better support their families and not be engaged in harmful labor.

In the summer of 2017, Tania received two months of tailoring training, and World Vision also provided her with a sewing machine and fabric so she could start her own business. She now works at home, where she is safe, and she has enough time to care for her father and sister. With the 80 taka (US$1) she’s earning every day, she can afford three meals for her family. But even though Tania is still working, she at least now can sleep without fear of being called into work, and she has more time to rest, watch television, play, and — most importantly — dance.

“Thanks, World Vision, for rescuing me from shrimp work,” Tania says. “Once my dream was to become a nurse, but now my ultimate goal is to establish a big tailoring store and feed my family.”

George Sarkar of World Vision in Bangladesh contributed to this story.

Editor’s note: As of January 2019, Tania has moved away from the community and is no longer participating in the program.

Every child deserves to be safe. Help keep a child safe.