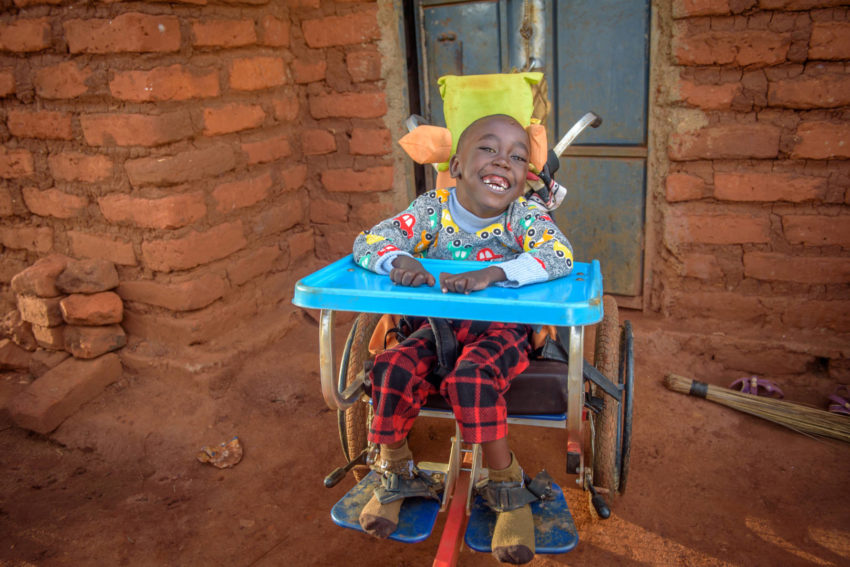 Dennis Ngumbau is all smiles in his new wheelchair. (©2019 World Vision/photo by Laura Reinhardt)

Boniface Wambua and Winfred Mutindi knew their firstborn child had some physical disabilities. His stiffened limbs would neither straighten nor relax.

They gave him the English name, Dennis. His grandfather gave him the Kenyan name Ngumbau — warrior. Very apt since being born had been a battle.

Boniface and Winfred were away from their home in Mwala, Kenya, when Winfred went into labor. After eight hours, she gave birth to him in a bush. Then, they walked for two days to get to the nearest hospital, where they learned that Dennis had cerebral palsy.

Boniface says that when he heard about Dennis’ disabilities, his faith faded. He says. “I felt like God hated me — that it was a curse.”

Dennis, now 8 years, spent his first five years mostly sitting on the rocky soil at their home, unable to move from place to place himself. He couldn’t be left alone. Winfred stuck close to home. But life felt small and limited both for Dennis and his parents.

He qualified for entry into the USAID-funded Accelerating Core Competencies for Effective Wheelchair Service and Support program, also known as ACCESS.

The grant-funded program didn’t stop with the wheelchair distribution. Dennis received a proper fitting for the wheelchair; then, his parents learned about how to clean and care for it.

Dennis’ parents confirm James’ assessment. Boniface says that Dennis is curious. “Sometimes when he hears the sound of a car, he wants to stand, so we have to hold him. He’s attentive, and he tries to respond to the environment.”

Boniface and Winfred attended World Vision-led classes with other parents in the community who also have children with special needs. Boniface says, “I used to see having a child with special needs as a problem, and it gave me a lot of sorrow.” Other parents encouraged him, telling him that Dennis could have a bright future, depending on how he nurtured him.

Another part of that bright future means including people with disabilities in society. Part of ACCESS involved World Vision’s Citizen Voice and Action groups who help advocate for positive change.

“Inclusion is for everyone,” says James. He gives an example of how wheelchair ramps at a public building can benefit the elderly and pregnant mothers along with people in wheelchairs.

Even though ACCESS ended in 2017, World Vision continued its work with children with disabilities and their families through the end of June with a program developed under the ACCESS project — Scaling Up 8+. World Vision staff working to identify children who needed wheelchairs, ensuring a properly fitted wheelchair, training on their upkeep, and the advocacy work by and on behalf of people with disabilities.

Key to the success of the project was transforming the attitudes of people in the community. That change began at home for Dennis.

Dennis’s wheelchair gave his mother, Winfred, the freedom to start a grocery store because her son has gained mobility. That extra income means they can provide better for their family. They’ve even been able to buy land on which they grow crops.

Boniface went from feeling cursed to seeing Dennis as a gift from God. Now, he’s the parent offering encouragement to others. “For a parent with a special [needs] child, I would encourage them to take good care of their children and to love them because that is God’s plan,” he says. “[I would] encourage them to feel like they have a child who has all the potential. They could even be the light to the family.”

And when the little warrior smiles as he sits in his wheelchair, that smile is a light of love to the world. 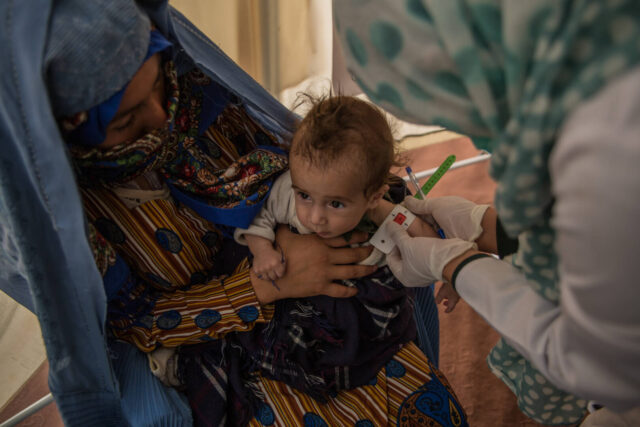