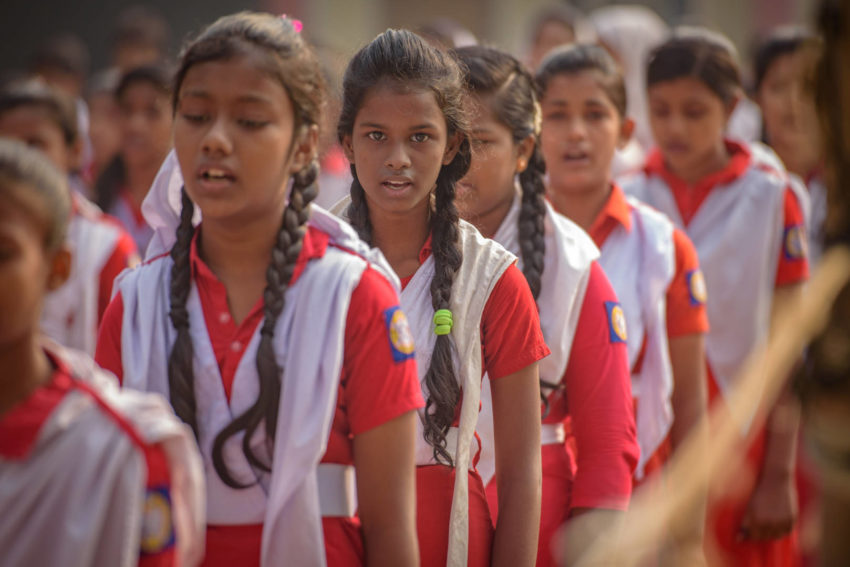 Bristy (center) and her classmates exercise in the school courtyard. (©2018 World Vision/photo by Laura Reinhardt)

In January 2017, 11-year-old Bristy sat with a group of donors from the United States who had journeyed to Bangladesh. They asked Bristy and her friends what their dreams for their future were. The girls stared blankly, not understanding the question.

They worked at a local shrimp processing plant in Khulna, Bangladesh, and the long hours of back-breaking work peeling shrimp in the dark and cold had stolen their dreams. The girls showed us fingers scarred by cuts from a razor-sharp appendage on the shrimp.

A year before, Bristy had to quit school to help provide income for the family. Her father had abandoned them, and now it’s just Bristy and her mother, Amena. Bristy has three older sisters who married as teenagers. One lives in India, and they suspect that she’s been trafficked into the sex trade.

Amena worried that if Bristy married young, she too might be vulnerable to trafficking. If Bristy didn’t continue her studies, her chances of child marriage increased dramatically.

During that same visit, in a different community, Choity, then 13, also met with donors. Like Bristy, Choity’s father had abandoned the family. Choity lived with her grandmother, Rumi Begum.

Choity had to drop out of school and go to work that year. “I was very sad,” she said. “Because I thought that all the opportunities to play games or to have fun with friends are gone.” She labored for a year. In the mornings she worked as a housemaid. That employer verbally abused her regularly and once even hit her. In the afternoons, she unfolded cement bags for another client, who used the bags as material with which to make shopping sacks.

Choity cried a lot when she had to quit school. She said, “If I don’t go to school, I can’t be anything. I can’t get a job. I can’t prosper.”

World Vision’s staff described the new Child-Friendly Learning and Recreation Centers that they would be opening soon as part of World Vision’s child protection work in Bangladesh. There the staff could work with girls, like Choity, on curriculum prepared for them to return to school.

Staff would also work with older girls, who are unable to attend because of their age, on vocational training for a safer, work-from-home job like tailoring.

But Choity said that she would only feel hopeful when she saw change.

Learning how to dream

World Vision opened the Child-Friendly Learning and Recreation Centers in May 2017, in both Bristy’s and Choity’s neighborhoods.

Choity too decided to attend, despite her initial skepticism. She felt too old to return to school, so she took vocational training in tailoring.

They worked with the girls and their families, teaching and instilling in them how to dream. Families created works of art called vision boards that now hang prominently in their homes. On each board, the girls and their families used cutout photos from magazines to envision what they’d like to achieve. World Vision staff worked alongside them to help with setting short-, mid-, and long-term goals. Then they developed an action plan to achieve these goals.

Choity said about creating the vision board: “Now all the dreams are in front of me, and it will remind me to go on.”

World Vision also helped parents ease the economic burden that led to the withdrawal of their children from school.

Through training, staff helped parents understand the long-term importance of their children attending school. They also provided a monthly grant, which lasted a year, to help make up for the lost income from their child’s labor.

World Vision then helped parents start new businesses that allowed them to increase their earnings. A survey of participating families showed that 94% of the households increased their monthly income by an average of $31 USD. To put it in context, that means that 100% of these previously impoverished families can now afford three meals a day and 95% can afford to pay for school expenses.

As part of the program, Choity received her very own sewing machine. Now she can sew dresses from her home and be her own boss.

She started her business in late 2018 and quickly started earning about 270 taka (US$3.20) per week, but she’s working hard to improve her sewing skills so she can get more dress orders and increase her earnings.

Bristy returned to school. She’s passed sixth grade and ranked sixth in her class after final exams. She dreams of becoming a teacher, working with access-challenged children in her community. And she’s part of her school’s volleyball team that just won the inter-school volleyball championship.

Both girls have moved from a past where their dreams seemed non-existent to a present where they are starting to see their potential being realized.

Kristy O’Hara-Glaspie of World Vision’s staff in the U.S. contributed to this article.