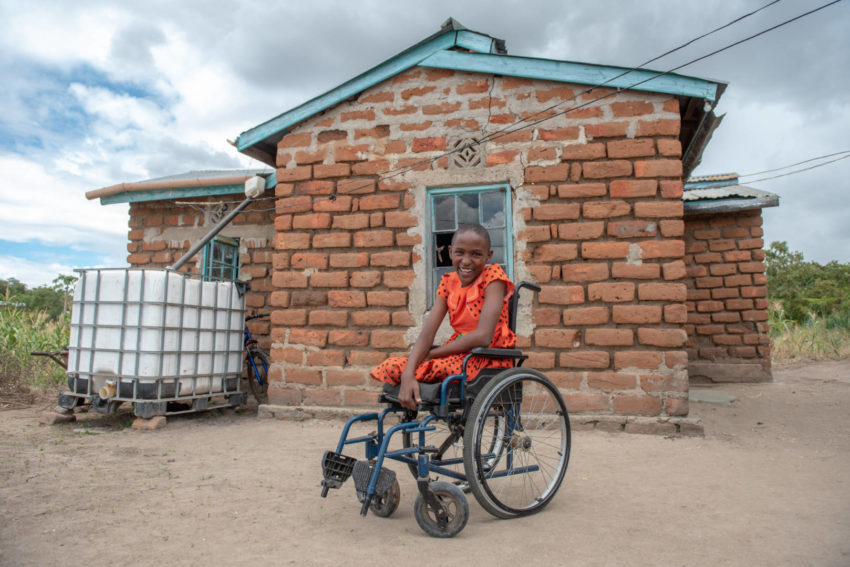 Before 12-year-old Wavinya received her wheelchair, she used to feel isolated and neglected. Now, she has the freedom to take part in games with her friends. (©2019 World Vision/photo by Laura Reinhardt)

Twelve-year-old Wavinya’s name means powerful. People might think that’s an unusual choice for a child born with her lower legs twisted so she wasn’t able to walk. But Wavinya’s mother, Esther Musyoka, loves her girl dearly. “Because she was given to me by God,” Esther says, “[I] want her to have every opportunity.”

That meant that for most of Wavinya’s life, Esther carried her everywhere — to church, to school, to community meetings. She wanted to make sure her daughter received an education and was also included in community activities. But a darker reason lurked.

In some communities in Mwala, Kenya, where the family lives, child abuse is a big problem. Any child can be affected by it. “She’s more at risk because she can’t run fast and protect herself,” says Margaret Matheka, a World Vision project coordinator in Mwala.

As Wavinya grew, her increasing weight caused Esther to suffer from chest pains. But Esther refused to endanger her daughter by leaving her home alone. And Esther’s husband, Joseph Musyoka, works as a subsistence farmer so the cost of a wheelchair was beyond the family’s reach.

Freedom in the form of a wheelchair

In Mwala, World Vision continued work that began with the USAID-funded Accelerating Core Competencies for Effective Wheelchair Service and Support project, also known as ACCESS. It provided properly fitted wheelchairs for children in need in many communities — including Mwala.

That project ended in 2017, but World Vision continued its work with children with disabilities and their families through a program developed under the ACCESS project — Scaling Up 8+. Part of this project was identifying children, like Wavinya, in need of wheelchairs and then ensuring that the chair is properly fitted to the child.

In 2018, Wavinya received her wheelchair and fitting. Esther also learned about proper maintenance to keep the chair in top condition.

That wheelchair has meant freedom for both Wavinya and Esther. Now, Wavinya can get herself to school, to church, and to community meetings on her own. “In a way, it’s liberated her to engage with other children because before she had to depend on other people,” says Esther.

Before the wheelchair, Wavinya felt isolated and neglected. Now, she can play games with her friends without Esther worrying. And chest pains no longer plague Esther, who enjoys better health.

Another aspect of Scaling Up 8+ was to ensure that society includes and embraces people with disabilities. One way of doing that was through World Vision’s Citizen Voice and Action (CVA) groups. They lobbied hard for the inclusion of all people.

Annastacia Mutunga, a child well-being facilitator in Mwala, explains that through World Vision’s water, sanitation, and hygiene programs, Wavinya has access to clean water at her school. By partnering with another organization, they have built latrines with wheelchair access. CVA groups are also advocating for wheelchair ramps to be built throughout the community.

The ongoing gifts of sponsorship

Life continues to improve for Wavinya and her family. In 2018, Wavinya was sponsored. Her sponsor specifically asked to help a child with special needs. Then, through a livelihoods program funded by child sponsorship, her family received a cow. In rural Kenya, having farm animals increases a family’s status. It’s also provided manure, which the family uses to ensure a more robust harvest.

For Wavinya, having a wheelchair has helped her to dream big dreams. She’s got her sights set on the skies. In 2018, her class studied different careers. They took a field trip to an airfield, and she learned about being a pilot. That’s been her goal ever since. She doesn’t feel hindered by her physical limitations. That’s Wavinya leaning into her powerful name.