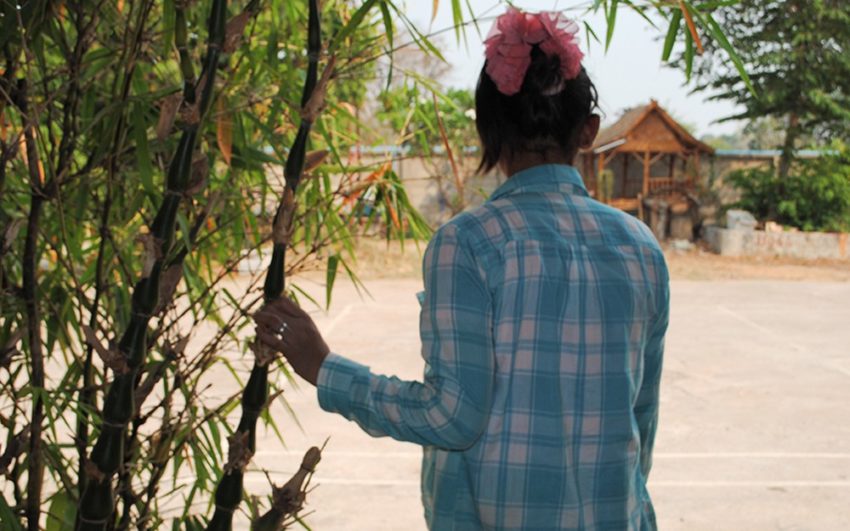 World Vision to have special programs for trafficking victims in countries like Myanmar, Cambodia, Vietnam, and many others where the selling of children has become part of the common struggle for survival. (©2012 World Vision/photo by Ammala Thomisith)

Human trafficking. A sleek, contemporary term for the selling of one human being by another for the purpose of forced labor or sex. When I was a child, it was simply called slavery.

While there are varying estimates as to the number of persons affected by trafficking (as of this writing, estimates range from 21 to nearly 30 million), the most heartbreaking statistic of all for this grandmother of three is the fact that about 26% of all trafficking victims are children.

Every year, 5.5 million children are trafficked for child labor. About 1 million children of these are annually sold into the global sex trade. Some of these precious babies are as young as 4 or 5. This grotesque and shocking reality has compelled World Vision to have special programs for trafficking victims in countries like Myanmar, Cambodia, Vietnam, and many others where the selling of children has become part of the common struggle for survival.

In 2006 I made my first visit to Myanmar, and I asked our staff to help me put a name and a face on this tragedy. I have to admit that I was nervous as I drove with one of our World Vision trafficking specialists to meet six young women who waited to share their stories.

My first thought as I greeted the girls was how sweet they looked. While I didn’t know their stories yet, I knew that none of the young women before me would be there unless she had been traumatized in ways I could not imagine. I had expected to see the shadow of that dark experience still reflected on their faces, yet the smiles that greeted me were open and warm and as curious about me as I was about them.

The introductions went on as one by one the girls shyly gave me their names and ages. (All names have been changed to protect the girls’ privacy.) One of the six I spoke with, Zena, 22, was just about to graduate from college. “I would really love to work for World Vision one day,” she confided, her voice ringing with a familiar passion.

Zena grew up in a Christian family. “I was 16 and a good student,” she told me in excellent English. “My dream was to finish high school and go on to university.” Her dream turned into a nightmare when a close family friend whom she loved and trusted invited her on vacation.

The woman, whom Zena called her “aunt,” took Zena to a resort town close to the border with Thailand, where she was introduced to a woman who claimed to be interested in training her for a good paying job. Trusting that her aunt would only have her best interest at heart and knowing how much her family needed the money, Zena agreed to go with the women to see her shop. The woman drove her across the Thai border to Chang Mai, a haven for sex shops and child prostitution. Suddenly Zena found herself locked in a brothel with 30 other confused and frightened young girls.

Bewildered at Zena’s story, I asked her questions to help me comprehend what I was hearing. Her answers were heartbreaking to me as a mother, grandmother, and woman: Zena was forced to sleep with strangers — sometimes up to 10 a night. Before, she had been a virgin.

That did it. I had come determined to conduct these interviews like a professional, but I didn’t bother wiping away the tears that welled in my eyes as I looked at the dignified young woman who now faced me across the table. My two daughters were about her age. Like my girls, Zena had been brought up to respect God’s laws by parents who loved her. Then one day that dream was destroyed in the cruelest possible way. “How did you survive?” I finally managed to ask.

Hope in the darkness

As Zena spoke, I could imagine the scene. A young girl sitting on a filthy mattress in a dark, smoke-filled room — her head bowed, her fists clenched, waiting with a beating heart for the door to open. And the words of the Psalmist came to mind.

My God, my God, why hast thou forsaken me?  Far from my deliverance are the words of my groaning.  O my God, I cry by day, but Thou does not answer.  And by night, but I have no rest.

“But after a time I remembered the story of Joseph from the Bible,” Zena continued. “Joseph also was sold into slavery. So I asked God to take care of me and to rescue me like he did Joseph. A short time later, I discovered that one of the other girls was from my hometown. She was a couple of years younger than me, and we didn’t know each other, but she was also a Christian so every chance we had we would pray and encourage each other.”

The nightmare is over

It took nearly a year for their prayers to be answered. International Justice Mission, an organization that rescues girls forced into prostitution, pushed local police to raid the brothel. Over 30 under-aged girls, including Zena, were rescued and the brokers were arrested. Many of the rescued girls were reunited with their families through World Vision’s repatriation program. For those who could not go home again, World Vision offered counseling and job training opportunities. But Zena’s remarkable story was not quite over.

Zena had been separated from her family for over a year. Until her rescue, her parents had believed she was dead. She wanted to go home and put the whole horrific experience behind her. But the brothel owners, a husband and wife who had been making a living by selling young girls for years, had been shut down before. Every time, they had been able to reopen because no one was willing to testify against them in court.

“It will take months to bring this to trial, and it won’t be easy,” our World Vision staff had told Zena. “But you are a leader to these girls. They will listen to you. If you agree to stay so will some of them. With your testimonies, these people will go to prison for a long time. Without them, they’ll be back in business as soon as they can buy more kidnapped children.”

After much prayer and conversation with her family, Zena agreed to stay and she succeeded in convincing several of the other girls to testify also. The court procedures took nearly a year, but in the end, the brothel owners were convicted and sent to prison, and Zena returned home.

“So tell me what it was like when you were finally reunited with your family,” I asked, needing to hear every detail of this happy ending.

“They were very happy. My mother just hugged me and cried. My aunt had told her that I had run away, so they thought I either didn’t want to come home or was dead.”

“Not with my family. They love me and they understood. But at first, some people in my community talked badly about me. Even in my church. Over time they saw that I am still me, and now it is fine.”

“And how is your life now? Do you still look forward to getting married and having a family?”

“I do,” Zena said, the sparkle in her eyes telling me that God had healed the deep wounds of her captivity and restored her youthful hope. “But first I want to finish my education and do something to help others. In another week I will graduate from college, and I hope to become an intern with World Vision.” (And she did!)

Her confident declaration brought joyful tears to my eyes. God promises to create beauty out of the ashes of our broken lives, and there was no question in my mind that that was exactly what was happening in Zena’s life and in the lives of each of the young women I met. But there was one last question I had to ask.

“What was your mother’s response when you told her that it was your aunt who sold you in the first place?” As a mother, I knew exactly what I would do to someone who hurt one of my children like that.

“I never told her,” Zena responded, looking surprised by the question. “It would have broken my mother’s heart.”

There are things in this world that I will never fully understand. One is the abuse and torture of innocent children by people who do not see them as human but as products to be bought and sold. Another is the kind of selfishness and greed that would motivate a seemingly average man or woman to sell a child for money.

But the greatest mystery of all — and the one that brings beauty out of the ashes — is the unselfish love that motivates a young girl to live every day with the burden of such a secret so her mother will not have to.