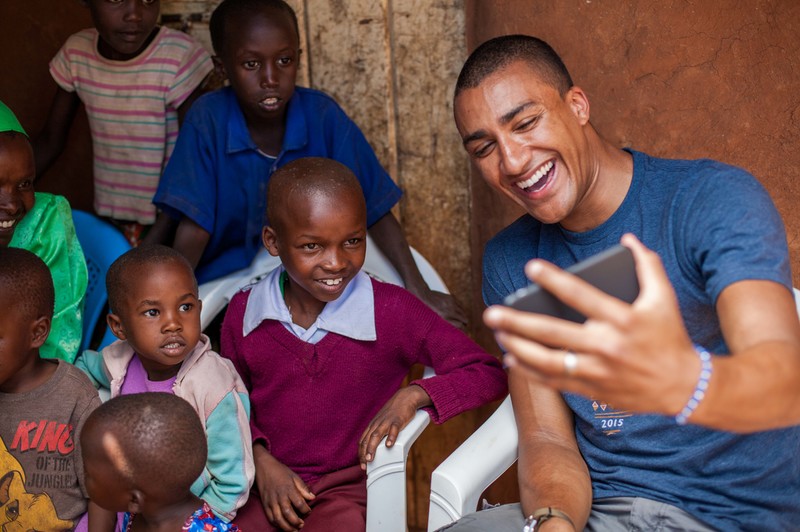 Ashton shares pictures on his phone with Phil and his family members at the family’s home in Bartabwa. (©2015 World Vision/photo by Lindsey Minerva) 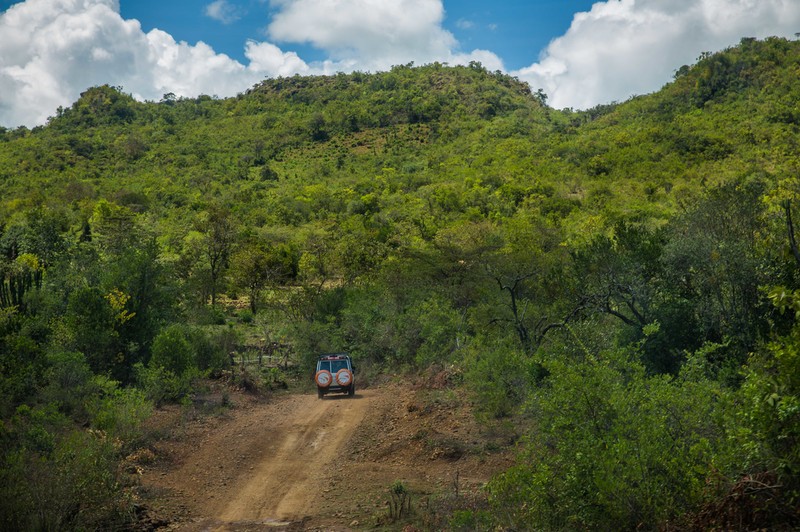 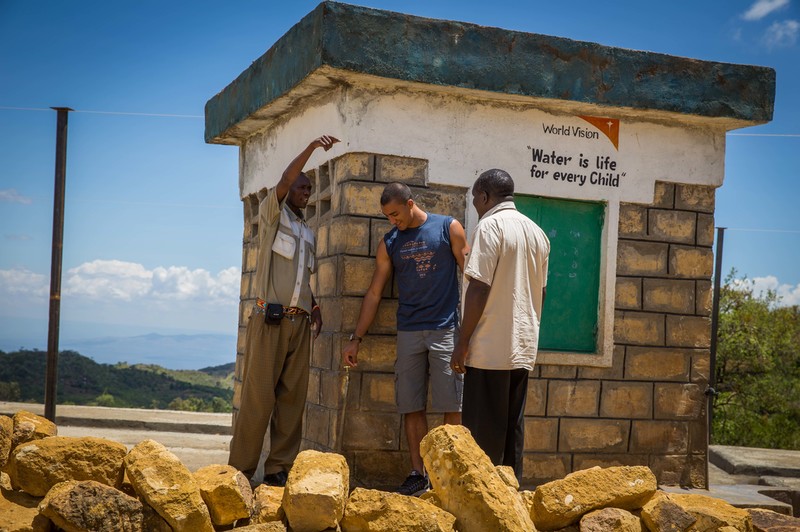 The couple also visited a water project in Bartabwa, which is a 45-minute uphill hike from the village. “I thought I was a strong person, but I’m not a very strong person,“ says Ashton. “These people know real strength. Seeing the impact [the water project] had on the community was a highlight.” (©2015 World Vision/photo by Lindsey Minerva) 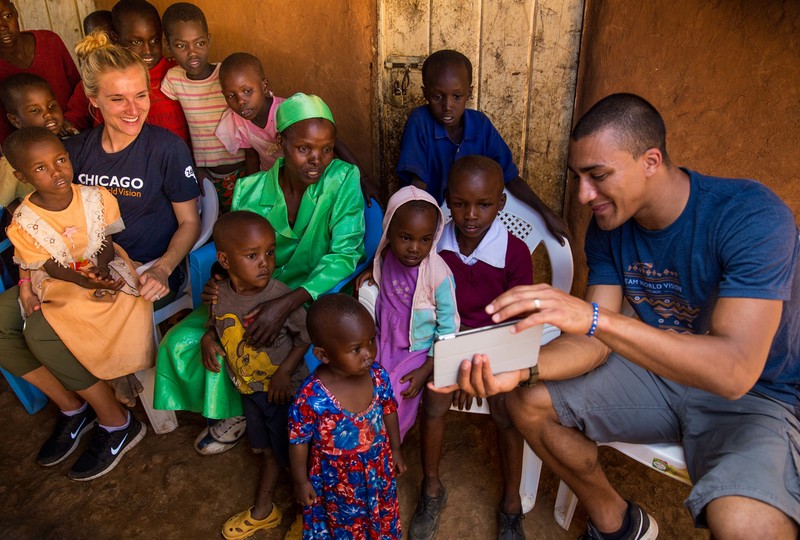 During a visit to Phil’s house, Ashton and Brianne share photos with Phil’s siblings and extended family members. “The group around him there to support him was more than I expected,” says Brianne. “I’m happy because I know he’s happy where he lives, and knowing that we’re sponsoring [a child] who has a great situation—but that we can make it better.” (©2015 World Vision/photo by Lindsey Minerva) 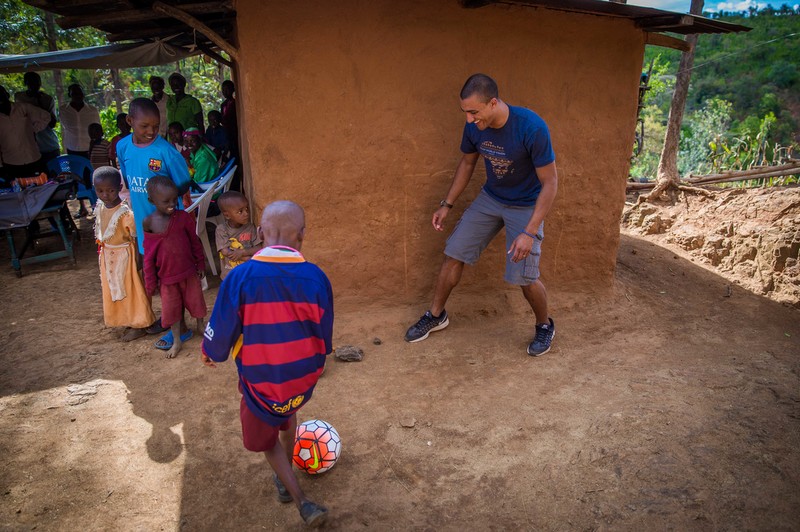 Ashton and Phil play with his new soccer ball, a gift to Phil from his sponsors. (©2015 World Vision/photo by Lindsey Minerva) 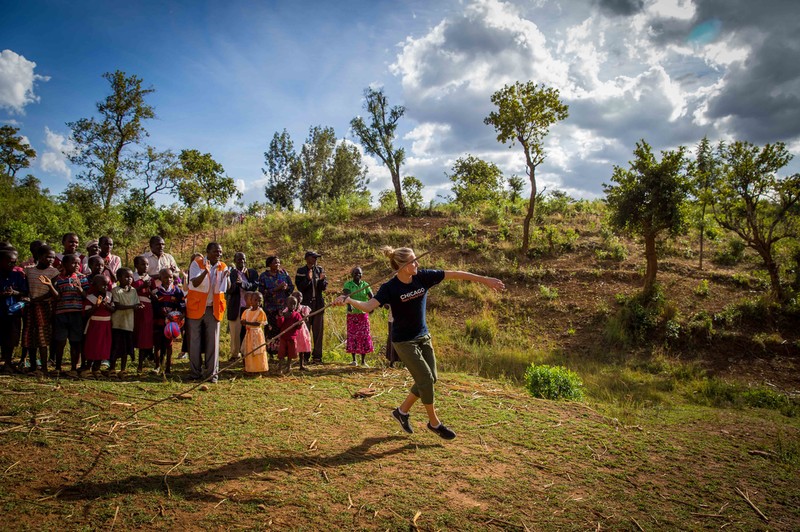 Using a stick as a javelin, Brianne shows Phil’s family one of the seven events that comprise the heptathlon. The other six: 100 meters hurdles, high jump, shot put, 200 meters, long jump, and 800 meters. (©2015 World Vision/photo by Lindsey Minerva) 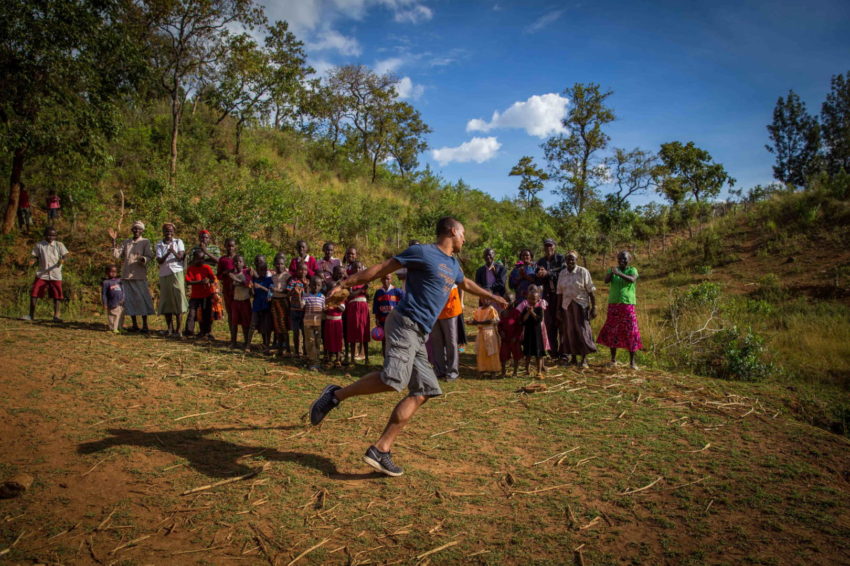 Ashton demonstrates his discus throw form with a rock. The discus throw is one of 10 events that make up the decathlon, which are spread across two days of competition in the Olympics. (©2015 World Vision/photo by Lindsey Minerva) 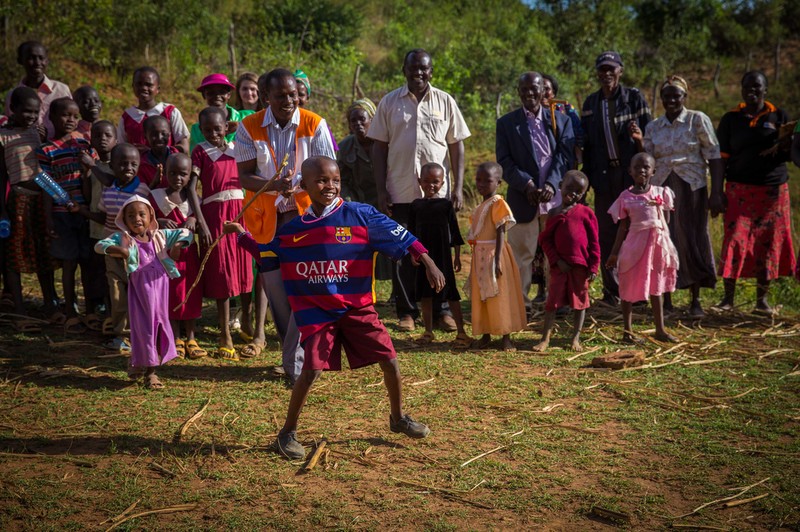 Phil tries his hand at the javelin throw. (©2015 World Vision/photo by Lindsey Minerva) 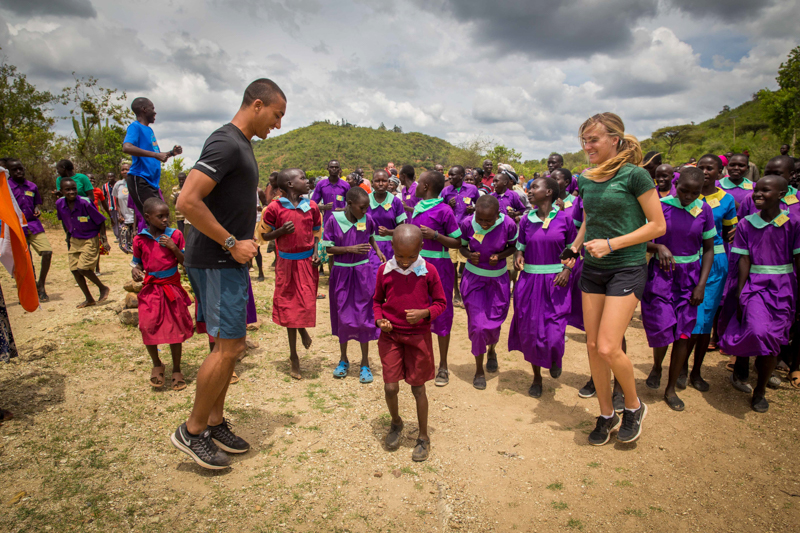 Ashton, Brianne, and Phil warm up with Phil’s schoolmates before the “2K" race they ran through Bartabwa. (©2015 World Vision/photo by Lindsey Minerva) 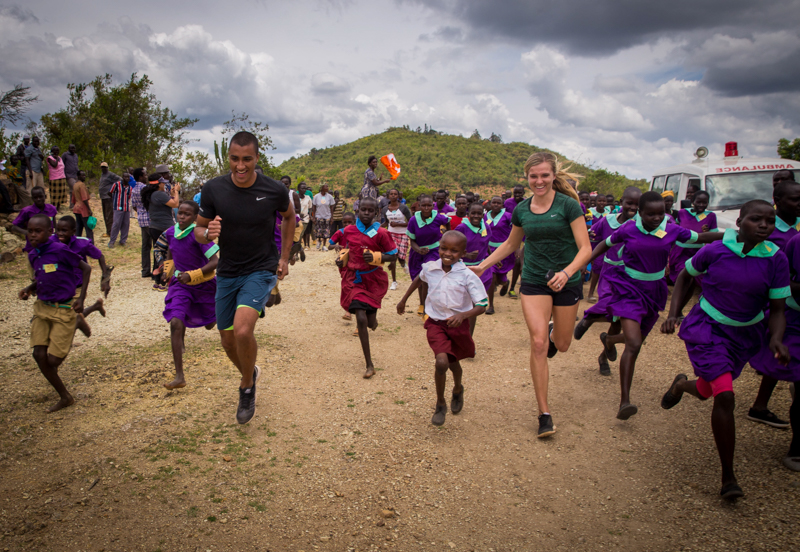 And they're off: The trio leads the rest of the children as they race through their community. “When we saw him run, we were like, ‘Phil, you can go to the Olympics,’” says Brianne. “That’s the first thing I was thinking—we’re going to get you to the Olympics if you want to go to the Olympics.” (©2015 World Vision/photo by Lindsey Minerva) 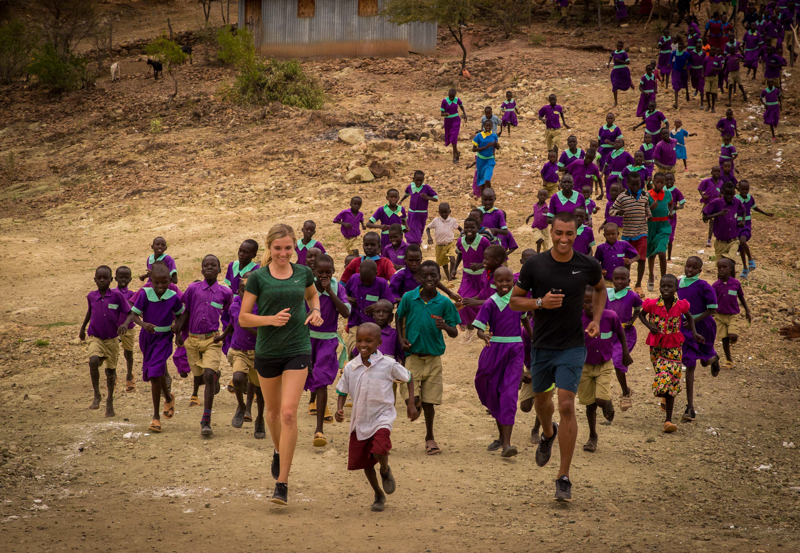 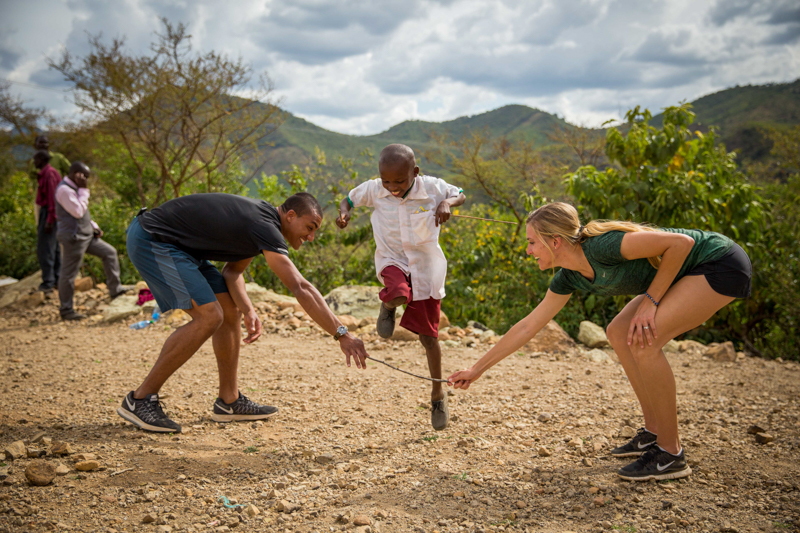 Ashton and Brianne continue the fun with Phil, creating a makeshift hurdle he had no trouble clearing. (©2015 World Vision/photo by Lindsey Minerva)

Olympians Ashton Eaton and Brianne Theisen-Eaton don’t usually train on an uneven dirt road instead of a track or practice with a javelin fashioned from a tree branch. But one day last October, they did.

And keeping pace with them on the rocky, dusty road in rural Kenya was a 10-year-old boy named Philemon.

The couple had just met Phil, as they affectionately call the child they sponsor through World Vision, on a visit to Bartabwa, where he lives in rural Kenya. After showering him and his family with hugs and gifts, they ran a short race with adults and children through the community.

“Seeing these kids in bare feet, running full tilt down a rocky hill, not a care in the world, laughing — it’s absolutely the most beautiful running I’ve ever seen — such effortless grace,” says Ashton. “They have the hardest feet but the softest faces and brightest smiles.”

Meeting Phil has given them a deeper motivation to compete in the upcoming 2016 Olympic Games in Rio de Janeiro. As Ashton, 28, defends his gold medal from the 2012 games in the decathlon for Team USA and Brianne, 27, goes for the gold in the heptathlon for Team Canada, both will be thinking about Kenya — and Phil. (Updated August 18, 2016: Brianne won the bronze medal in the women’s heptathlon, and Ashton won the gold medal in the decathlon.)

Since meeting at University of Oregon as college athletes and then marrying in 2013, Ashton and Brianne have become track and field’s power couple. He’s broken the world record in the decathlon twice, and they both won gold medals at the International Association of Athletics Federations World Indoor Championships in March.

At the invitation of two-time U.S. Olympian Lopez Lomong in 2013, Ashton became involved with Team World Vision, a program that encourages anyone to run and raise money for clean water projects in Africa. Two years later, he and Brianne decided to sponsor a child, which brought Phil into their lives. Through child sponsorship, they’re able to play a part in transforming Bartabwa by providing clean water, better health and sanitation, education, and economic development opportunities.

It completely changed who we are and how we approach our life going forward.—Brianne Theisen-Eaton

Last year, they took their engagement to the next level and visited Phil in Kenya. “It was the trip of a lifetime,” says Brianne. “It completely changed who we are and how we approach our life going forward.” They spent time with Phil’s family and visited the community’s new water project, a capped spring that is bringing clean water to the people of Bartabwa.

Witnessing the chasm between how Phil lives and their own standard of living in Eugene, Oregon, didn’t generate pity because they saw him surrounded by loving family and a supportive community. “I don’t see Phil and his family missing things so much as opportunities,” says Ashton. “He doesn’t know the difference between our lives — and that’s okay, he doesn’t need to. But we have the chance to give this kid some opportunities.”

Relieving the daily burden of survival is the key for kids like Phil to reach their potential. “In Africa, life is tough, and there’s so much you need to do to survive,” says Brianne.

Through sponsorship, the couple is chipping away at the root causes of poverty and creating opportunities for Phil. “The more you can limit the survival factor and make people’s time be about realizing their potential, that’s good,” says Ashton. “You have to start from square one, and sometimes that’s getting water.”

Me winning an Olympic gold medal is not as important as these kids getting water.—Brianne Theisen-Eaton

And opportunities unlock potential, whether in Kenya or the U.S. Becoming an Olympic athlete takes hard work and determination, but it also requires a few helping hands along the way. “It’s a big deal,” says Ashton. “People who didn’t know me and had no business helping me for any [reason] — something they said or some small contribution they made changed my life. Now I am in a position where I can do that.”

They want to help Phil dream and reach his aspirations, too. During their visit at Phil’s home, says Ashton, “I wanted to get pictures of all these things [Phil] can be. ‘That’s a rocket, you can fly in that if you want. Or, this guy is from your country, and he’s in the Olympic Games — you can do that. See this doctor? He’s helping people.’ Just give him a book of all the things that you can be and say, ‘pick one, and we’ll help you get there.’”

Beyond the Olympic Games

As elite athletes, Ashton and Brianne have a platform to influence young people around the world — with both their performance at the games and their humanitarian work with World Vision. “Hopefully a young kid can see what we’re doing on the track and off the track and put those together not as separate things but the same,” says Ashton.

And while preparing for the Olympics has Ashton and Brianne on the track more than off, their experience in Kenya stays with them.

“It puts everything into perspective,” says Brianne. “Me winning an Olympic gold medal is not as important as these kids getting water.” As she’s competing in Rio, “I’ll think about doing it for them so that I can have more of a voice. Maybe that will help me compete better, because it will be competing for something else instead of just the gold medal that everybody wants so bad.” Ashton’s inspiration comes from his memory of the children in Phil’s village running alongside them with carefree abandon.

This is what life is about—making someone else’s life better.—Ashton Eaton

Once the games are over, Ashton and Brianne would like to go back to Kenya to spend time with Phil, see more water projects, and, “get our hands dirty doing something,” Brianne says. “There’s a piece of us that feels like we belong there and we’re part of helping that community.” (Read what Ashton and Brianne learned about sponsorship and World Vision’s work.)

Track and field athletes typically have longer careers than other sports, but eventually, Ashton and Brianne’s competition days will be behind them. And because they bring the same dedication and enthusiasm to their relationship with Phil as they do to their current training, there will be much to show beyond any medals they win.

“This is what life is about — making someone else’s life better,” says Ashton. “We have learned and experienced things that will impact our [future] kids’ lives. And because of that, their kids. And [Phil’s] family and his kids. There’s probably not much else you can do in your life that will have that significant effect on the world.”

Watch Brianne and Ashton in Rio:

Brianne competes in the heptathlon for Team Canada Aug. 12 to 13. She is favored to medal. (Updated August 14, 2016: Brianne won the bronze medal in the women’s heptathlon.)

Ashton competes in the decathlon for Team USA Aug. 17 to 18. He’s also picked to win gold, which would make him the first decathlete to win back-to-back golds since Daley Thompson in 1980 and 1984. (Updated August 18, 2016: Ashton won the gold medal in the decathlon.)