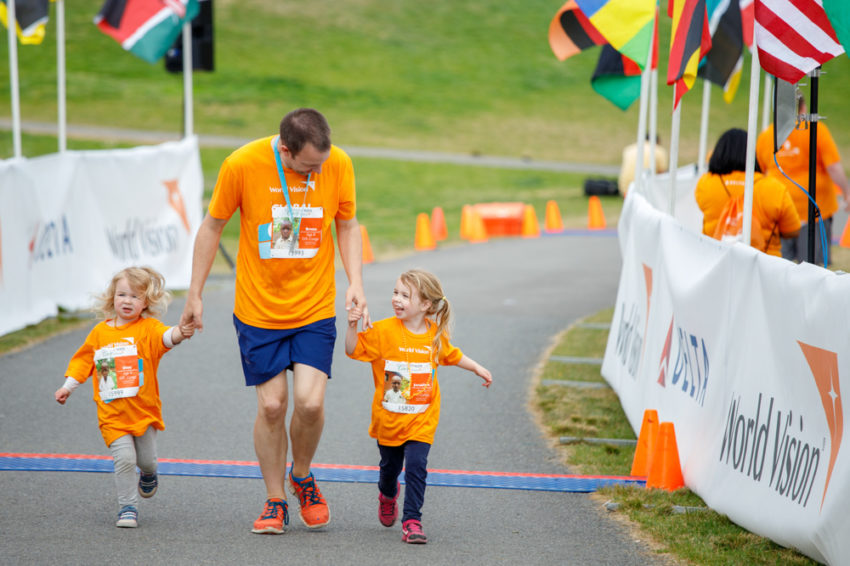 Participants cross the finish line of the Global 6K for Water May 19 at Gas Works Park in Seattle. (©2018 World Vision/photo by Chris Huber) 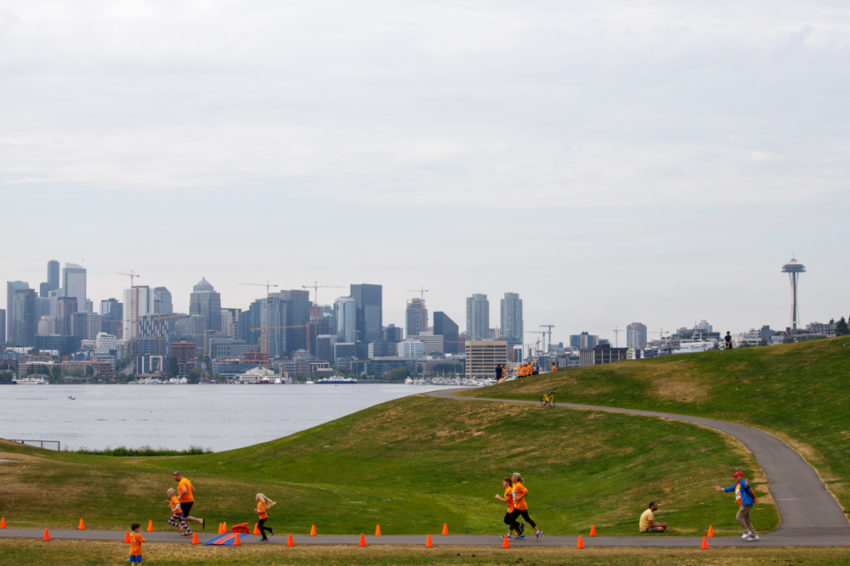 Participants approach the finish line of the Global 6K for Water May 19 at Gas Works Park in Seattle. (©2018 World Vision/photo by Chris Huber) 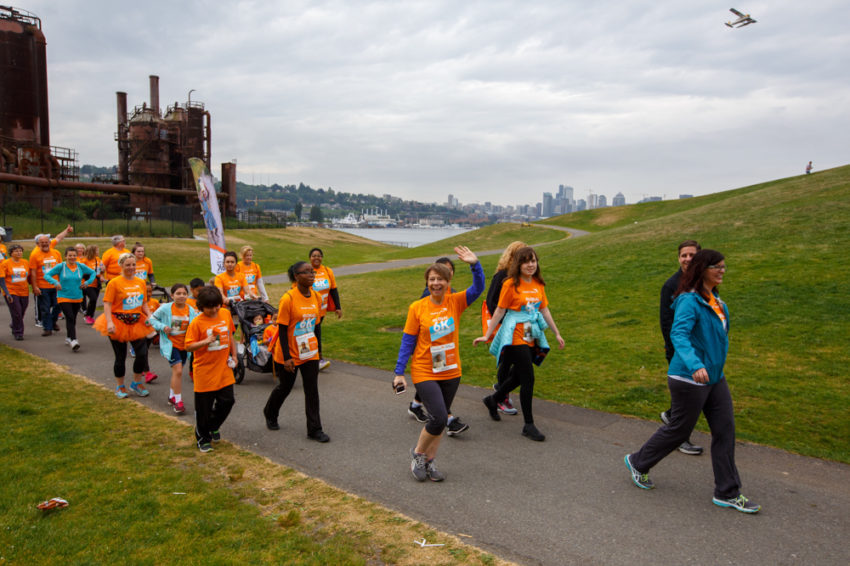 Participants wave and cheer as they begin the Global 6K for Water May 19 at Gas Works Park in Seattle. (©2018 World Vision/photo by Chris Huber) 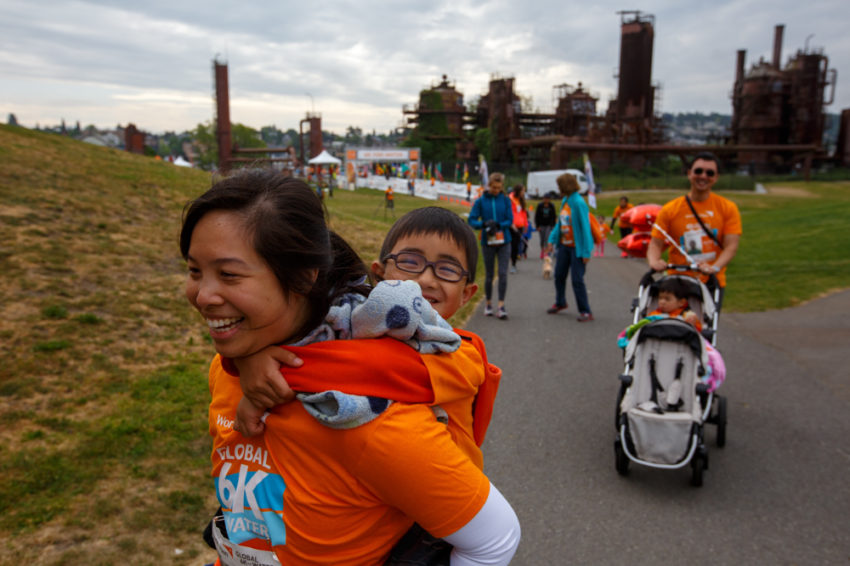 Linda Mach carries her 6-year-old nephew William as they begin the Global 6K for Water May 19 at Gas Works Park in Seattle. (©2018 World Vision/photo by Chris Huber) 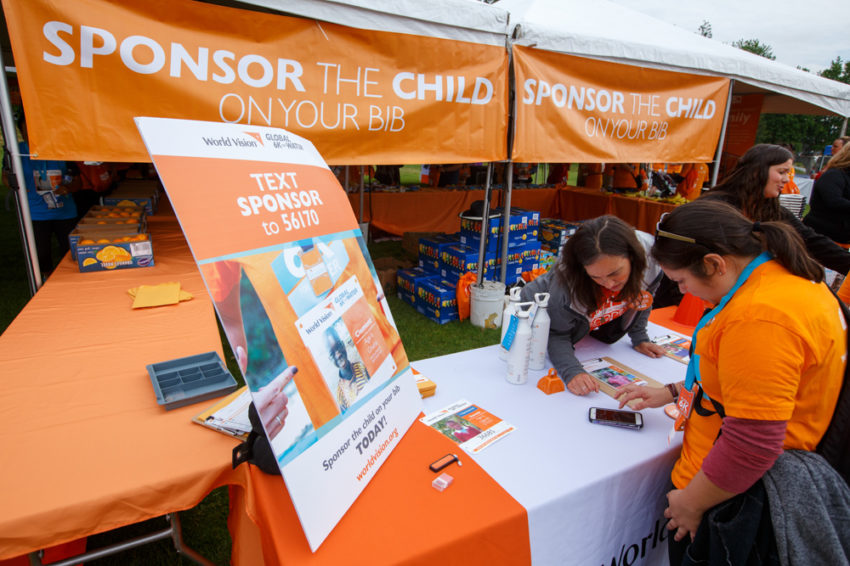 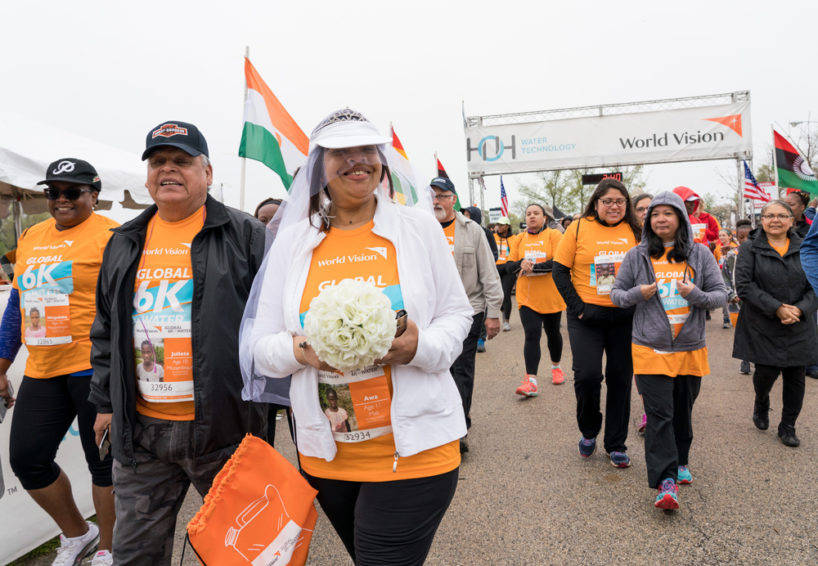 Runners, including Alicia Joseph who was celebrating the wedding of Prince Harry and Meghan Markle, start the Global 6K for Water, held on the lakefront in Chicago, Illinois. (©2018 Genesis Photo Agency/photo by Alex Garcia) 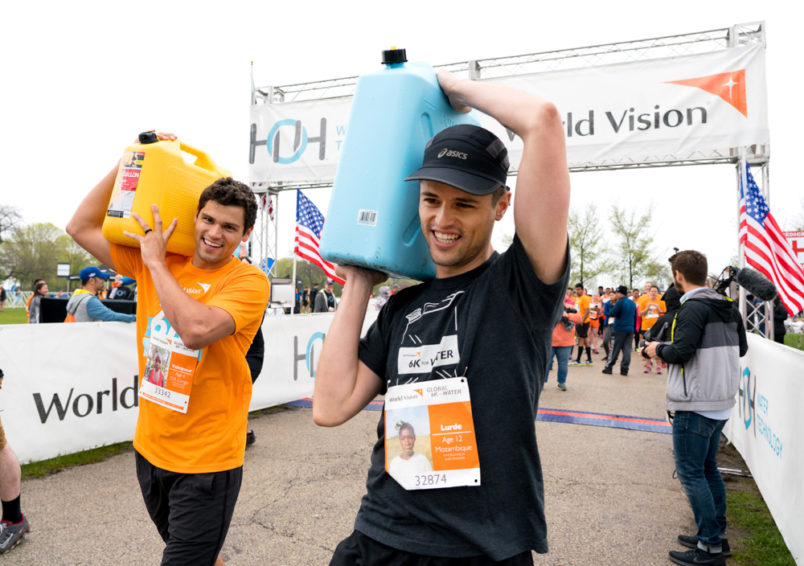 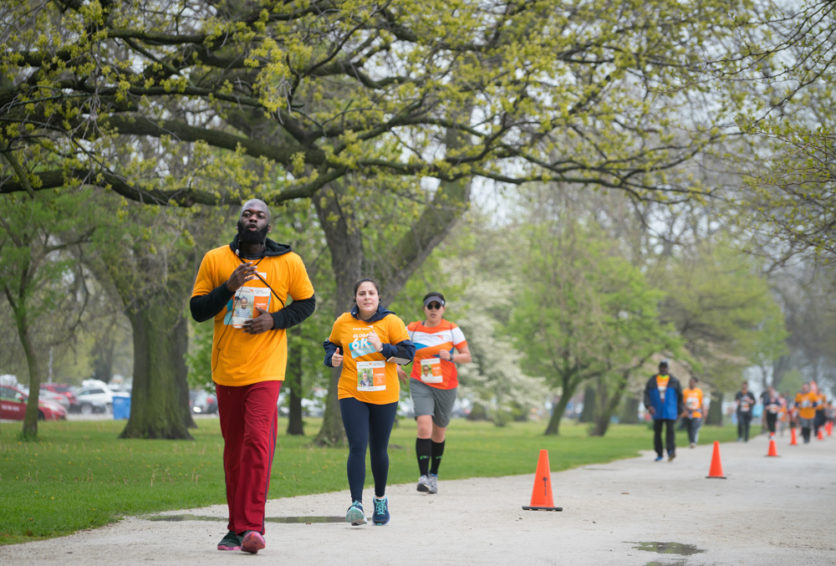 Runners and walkers during the World Vision Global 6K for Water held on the lakefront in Chicago. (©2018 Genesis Photo Agency/photo by Alex Garcia) 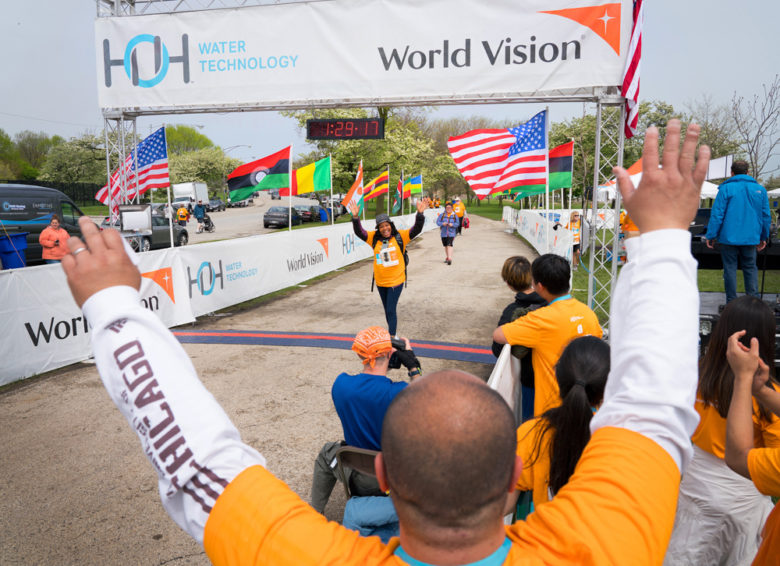 Calvin Lee of the Urban Voice Community Church cheers for Kindergarten teacher Beatrice Hall as she crosses the finish line during the World Vision Global 6K for Water held on the lakefront in Chicago. (©2018 Genesis Photo Agency/photo by Alex Garcia) 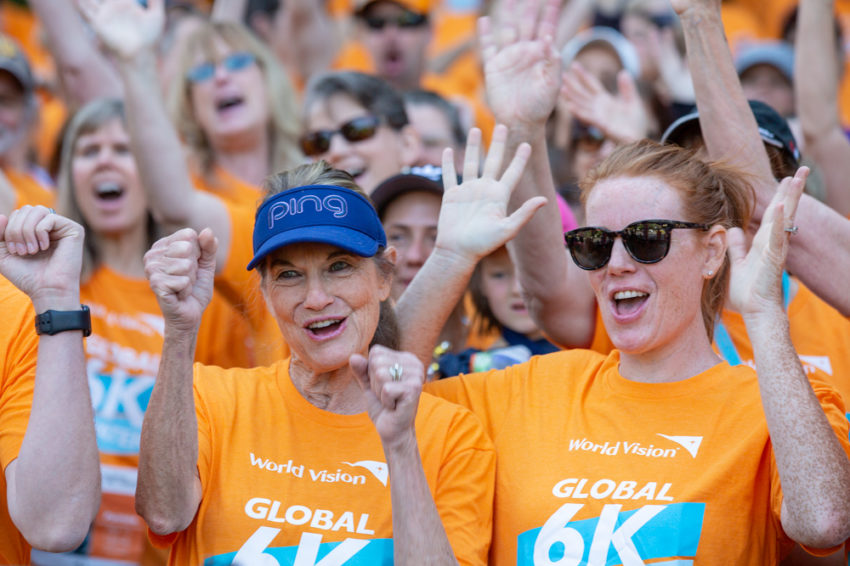 Walkers and runners from Green Valley Community Church cheer before beginning the Global 6K for Water May 19 in Placerville, California. (©2018 World Vision/photo by Heather Klinger) 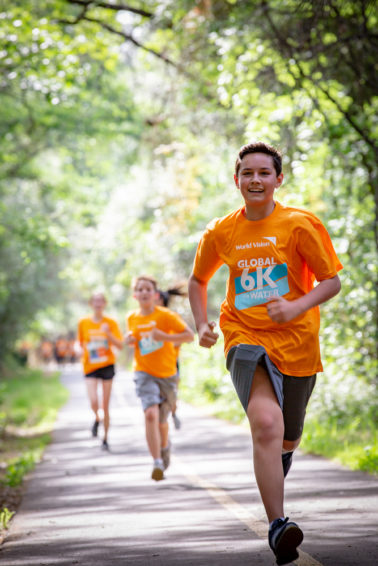 Children and youth run the Global 6K for Water May 19 in Placerville, California. (©2018 World Vision/photo by Heather Klinger) 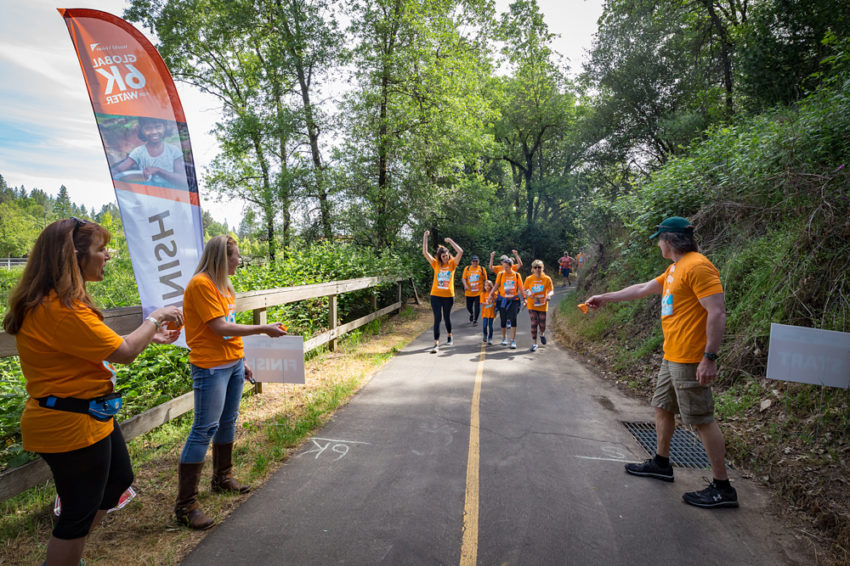 World Vision’s 2018 Global 6K for Water united thousands of people to bring clean water to people in need May 19, including one 12-year-old girl who declared it a “life-changing” day.

“There are children my own age who don’t have access to clean water like I do,” says Zoe Potesta, 12, of Seattle. Sporting pigtails and two orange strips across her cheeks, she waited for the race to start at Gas Works Park. “This race changes the life of another child and in doing so, it changes me. I’ve read the Long Walk to Water too, and I’ll do this again to make changes we need to do good. To do this is life-changing.”

Zoe was among more than 48,000 participants worldwide who laced up for the Global 6K for Water May 19. Races were held in 1,075 locations in 23 countries, including the United States, Canada, Germany, Spain, Indonesia, Japan, Kenya, and Australia.

Overall, more than 63,000 people received clean water through the 2018 Global 6K for Water.

Going the distance with heart and muscles

Across the United States, children, parents, couples, and teams wearing vibrant orange T-shirts emblazoned with the words “Global 6K for Water,” streamed out in celebration with orange wigs, tutus, and balloons.

“It’s an important event for families,” says Zoe’s grandmother, Libby McVoy, of Auburn, Washington. “We get clean water from our taps, and I wanted my grandchildren to understand what it means to other children who have to carry that burden and weight on their shoulders to get water.”

Zoe’s 10-year-old sister, Bianca, took her grandmother’s sentiment to heart and carried a gallon on her hip. “I’m here today to help people who are less fortunate and understand what it feels like to carry water for such a long distance.”

Going the distance with a plastic jug filled with water was challenging for Bianca, who joined more than 1,200 other participants at Gas Works Park. Six kilometers (about 3.7 miles) is the average distance that people, usually women and girls, in the developing world walk for water — water often contaminated with life-threatening diseases.

Each day, more than 800 children under age 5 die from diarrhea caused by contaminated water, poor sanitation, and improper hygiene. The number of people without access to clean water, however, is shrinking, as World Vision provides a new person with clean water every 10 seconds. Today, 89% of the global population has access to clean water.

Tears welled in Luz Maria Insignares’ eyes as she signed up to sponsor a 6-year-old in Mauritania. The former Miami resident recently moved to Seattle. “I just remembered my mother in that very moment,” Luz Maria says. “She has always instilled in me the importance of giving to those less fortunate because when we’ve had nothing, the Lord always provided. I wanted to give not expecting anything in return. I just imagined for a moment all the smiles and joy it would bring this little girl, and that alone fills me up to know that maybe one day she will, too, grow and help someone in return. That excited me because I know that we are God’s hands and feet on this Earth, and when we feel that tug, we just have to remember to answer the call.”

In Chicago, drizzle and cloudy skies didn’t stop the more than 1,000 participants who gathered at Montrose Park. For Mark and Andrea Wittig, the race was more than another run. It was personal; they’ve been running together since they were engaged more than a decade ago.

“I told her on the first date, ‘I’ll never run a marathon,’” says Mark. Andrea added, “Eighteen months later, he ran the marathon with me.”

Now more than 11 years later with a family that has blossomed to include three children, Andrea and Mark think about their middle son, Josh, as they pass the miles and markers to the 6K’s end. Josh was adopted from Uganda when he was 3 years old. When they brought him home, he had giardia, a common parasite for children exposed to unsafe water. “He lived the reality of not having clean water,” Andrea says.

It was also a family affair for HOH Water Technology, a corporate partner for the 6K. The Chicago-based water treatment company is an American success story, celebrating 50 years and three generations of family ownership. They had more than 100 staff members come out to run and walk for clean water, including current president Tom Hutchison and his son Reid, who walked with a hefty jerry can.

“We say our mission is to save water locally and change lives globally,” Tom says. And, he added it’s a chance for team building. “Monday through Friday life can be hard and chaotic. This is a chance not to think about the pressures of work, but instead to think, ‘Hey, we’re making a difference in the world.’”

Kindergarten teacher Beatrice Hall was also looking at the ways thinking globally can help locally. She brought 40 students from Alex Haley Elementary. The school is located on the south side of Chicago in an area with high poverty levels. For all of the students, it was their first time doing a charity walk.

“We’re trying to get the kids to fight for and believe in something. I tell them, ‘You can do anything; you can be anything,’ and this is part of it — showing them they can make a difference globally,” Beatrice says.

Participants ranged from first-timers like the students from Alex Haley Elementary to experienced racers like Tyrone Wheeler who has run multiple marathons with Team World Vision. With his headphones, sports sunglasses, and runners’ build, his joy for the sport was clear as he scanned the crowd.

“It’s beautiful seeing people out and running,” says Tyrone. When asked about advice for new runners, he adds, “Run your race. Have fun. Embrace it.”

It’s advice Alicia Joseph took to heart. She stood out in the crowd in a tiara, veil, and wedding bouquet. “If we’re going to have a walk on the day of the royal wedding, … you’ve got to,” she says laughing.

Altogether the Chicago event raised enough money to bring clean water to more than 1,700 children in the developing world. Some participants, like the Zavala family of Chicago, went one step further — sponsoring the child on their 9-year-old son Isaiah’s bib. His mother, Jenica, says,“We want him to know that love and the love that we have for him, we should give to others as well because the Lord loves everyone.”

Other voices from the 2018 Global 6K for Water: