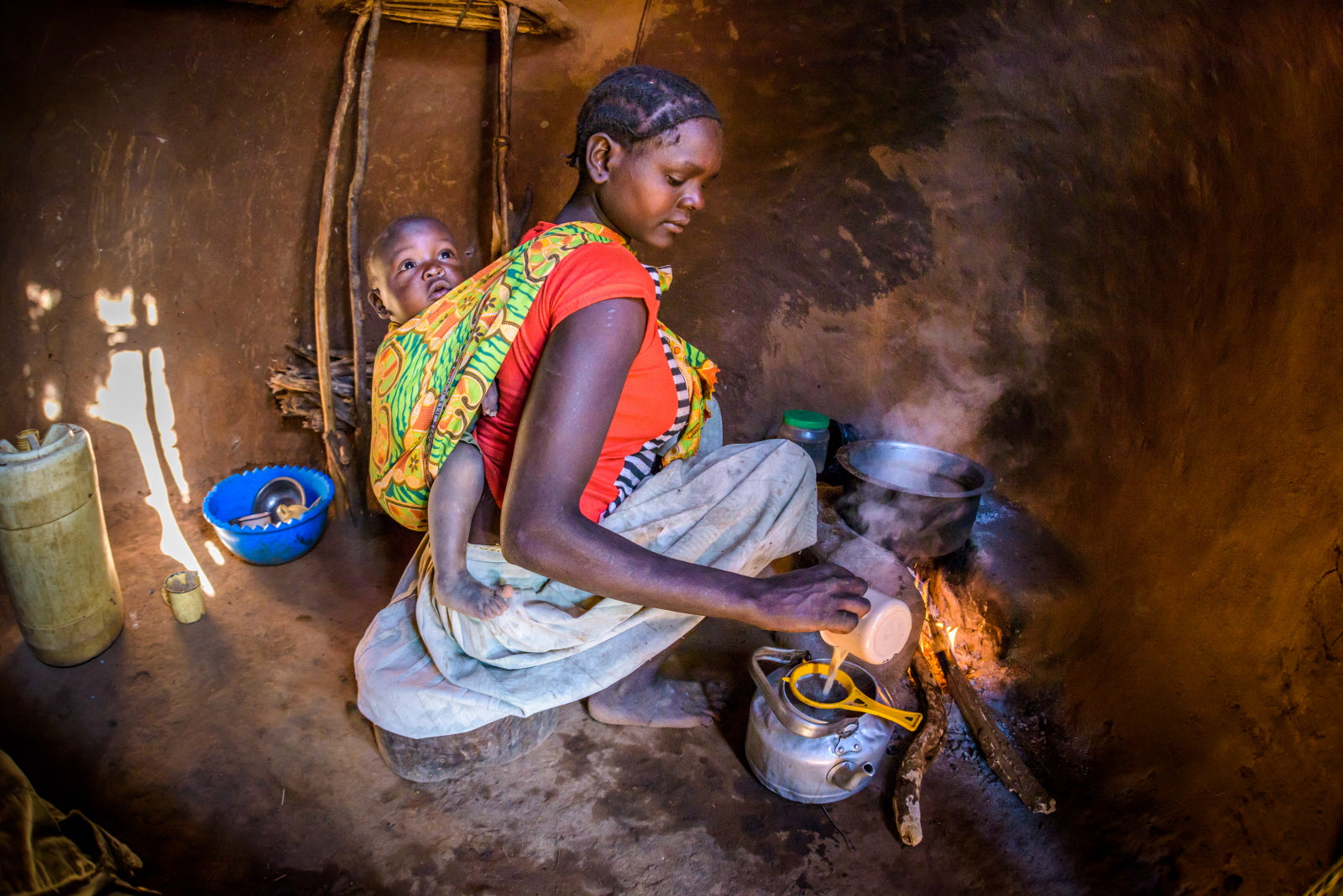 With baby Haron tied to her back Monica makes milk tea for her children's breakfast.

Shooing away goats and cows, Monica Lotuliapus digs for water in the dry Kesot riverbed. The impatient animals paw at the hole she’s scooping with her hands and a metal cup. There’s no time to wait for solids in the water to settle; she pours the muddy brown liquid into the 20-liter jerry can and lifts it onto her head to carry it home.

That’s the water she’ll boil for tea, stir into ugali corn mush, and pour over baby Haron for his bath. She’ll carry more jugs of water today for the baby goats in her pen and to wash her family’s clothes in a bucket.

Every drop is precious, but it’s also dangerous.

Water experts say the presence of coliform bacteria or worse — fecal coliforms — indicates trouble. Coliform bacteria are found everywhere, and most of the time they aren’t harmful. But E. Coli and others that are found only in feces — especially human waste – indicate disease-causing contamination.

Where Monica lives, fecal contamination is a given, since goats, cows, and camels tramp through the water hole. At night, cheetahs, hyenas, and foxes come to drink.

Villagers have no latrines, so their feces spreads disease, too. And since they don’t have enough clean water for bathing and handwashing, it’s easy to spread infections through contact and open sores.

The turbidity — cloudiness — of Monica’s water is not just icky, it’s unhealthy. Clay, silt, and organic matter suspended in the water feed microbes. Turbidity and the “total suspended solids” that make her water murky are off the charts.

A typical water sample from an open water source like Monica’s in Kenya, reveals a scary array of ingredients — a nasty stew of pathogens — bacteria, viruses, parasites, and protozoa.

Bacteria in dirty water include:

Additionally, Hepatitis A virus causes liver disease and is primarily spread through water or food contaminated by human feces.

And a UNICEF study estimated that worldwide nearly 1,000 children died from diarrhea each day in 2013, primarily for lack of clean water and sanitation.

Water and sanitation problems persist in rural Kenya, where as recently as 2015 only 57% of people had access to water from an improved source, and only 30% had improved sanitation.

At home, Monica pours water from her jug into a cooking pot and builds up the wood fire. She’ll boil the water for tea and add fresh goat milk, then pour it into cups for her children to drink.

Does she worry about the water in her tea making her family sick?

“Of course,” she says. At least one of her children is sick every month. “But it’s the only water we have.”