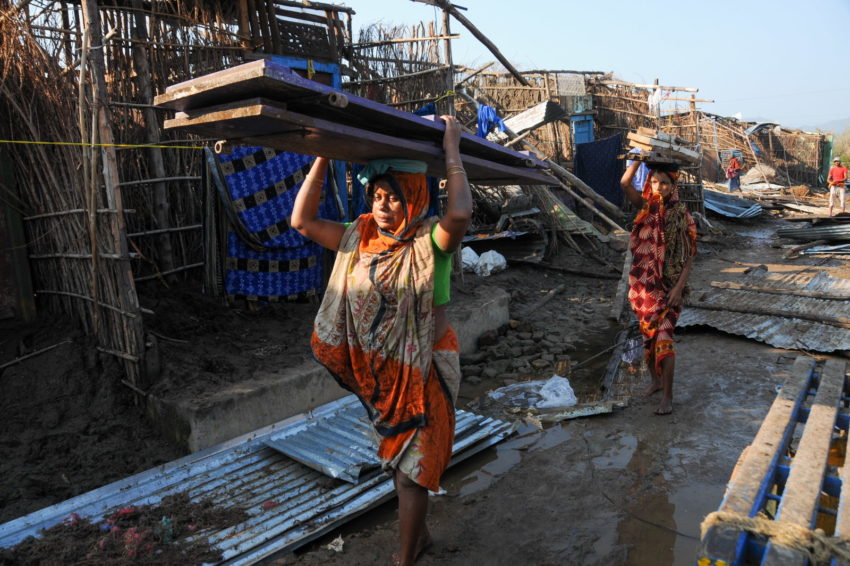 Three days after Cyclone Phailin hit the coast of India’s Odisha state in October 2013, people who had evacuated to save their lives returned to their destroyed houses to pick up the pieces. (©2013 World Vision/photo by Theodore Sam) 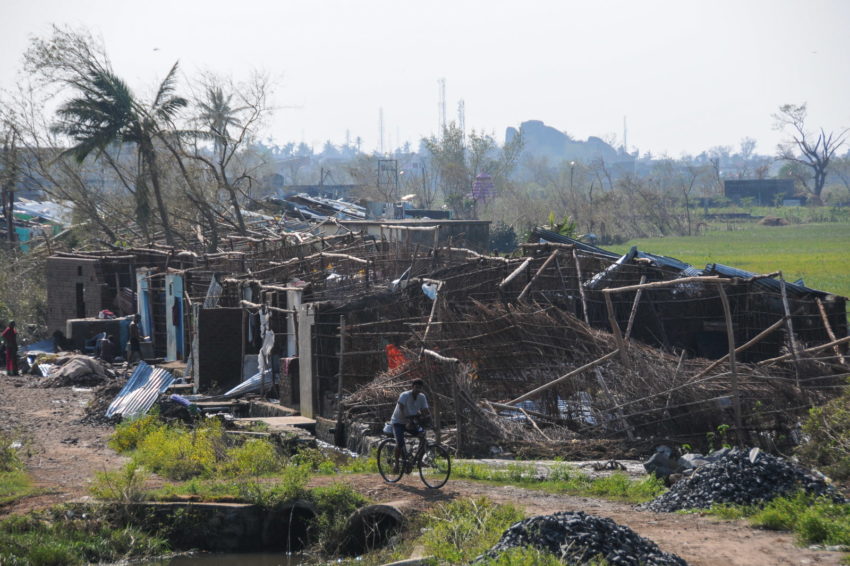 Houses damaged, roofs blown away, livelihoods lost — Cyclone Phailin plundered the lives of thousands of people. In this small settlement outside the town of Berhampur, more than 200 homes were damaged. (©2013 World Vision/photo by Theodore Sam) 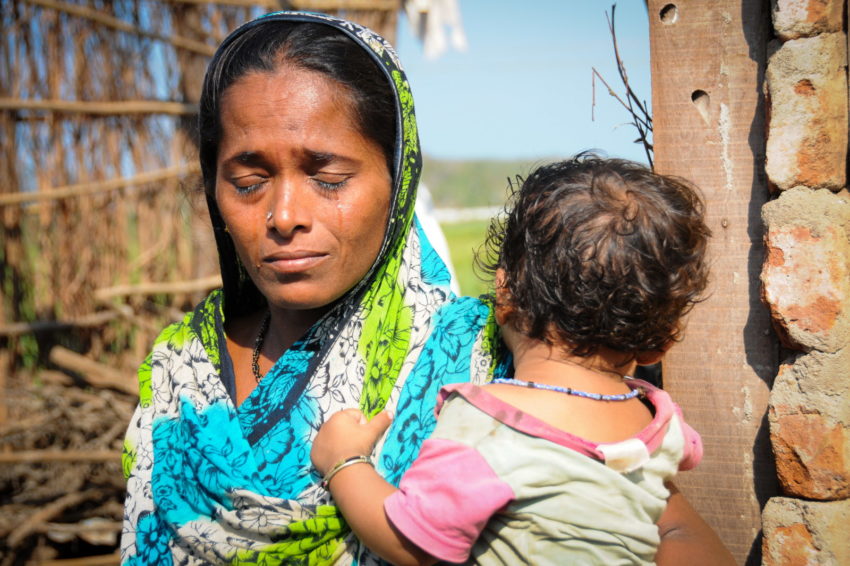 Madhuri Maharana couldn’t hold back tears. Cyclone Phailin destroyed the home her family had built using borrowed money and savings from her husband’s $3 daily wage. She wonders how they will pay back the money and manage household expenses as they start rebuilding from the first brick. (©2013 World Vision/photo by Theodore Sam) 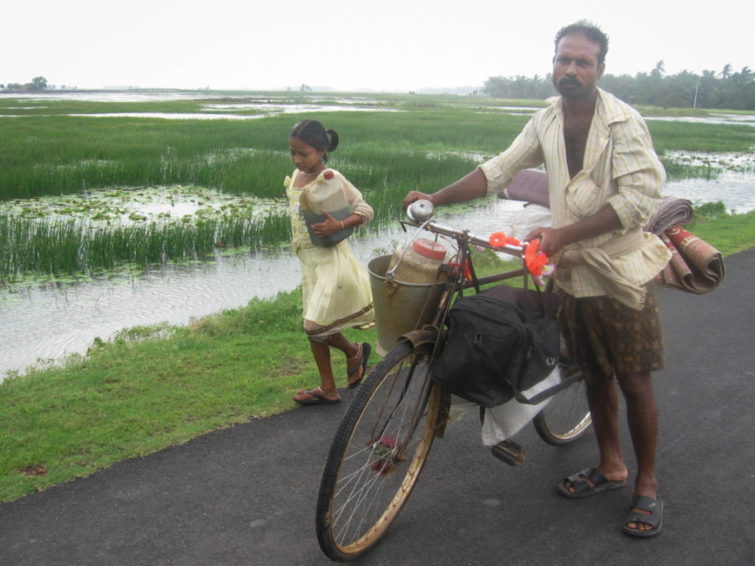 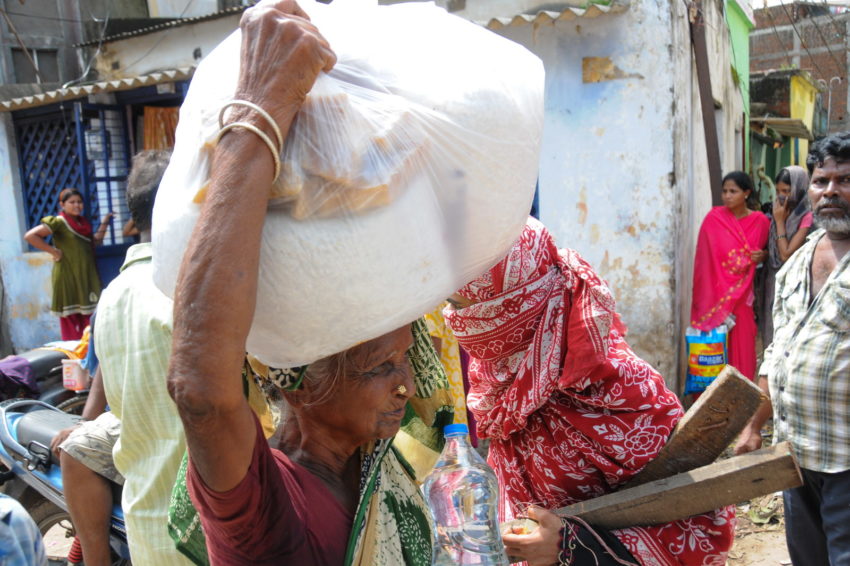 Women carry a relief pack of dry rations from a World Vision distribution for families in the community of Berhampur Town after Cyclone Phailin. (©2013 World Vision/photo by Theodore Sam)

Cyclone Phailin made landfall near Gopalpur, in India’s Odisha state, on Oct. 12, 2013, at 9 p.m. local time. It was the strongest storm to hit India in 14 years, bringing winds of 140 mph and torrential rain that toppled trees and power lines along 250 miles of the Andhra Pradesh and Odisha coastlines.

Cyclone Phailin killed 23 people and affected about 9 million residents. More than 1 million people were evacuated ahead of its landfall to avoid a repeat of the death toll of a 1999 cyclone, which killed 10,000 people. Phailin also destroyed crops worth more than $394 million along with hundreds of thousands of houses, schools, and other buildings.

With an early warning of a depression forming over the Andaman Sea near Thailand, communities, aid groups, and government authorities prepared to cope with a historic storm.

FAQs: What you need to know about Cyclone Phailin

Explore frequently asked questions about Cyclone Phailin, and learn how you can help children and families in India today.

What is a cyclone?

What is the difference between a cyclone, a hurricane, and a typhoon?

The differences among cyclones, hurricanes, and typhoons are their locations, although scientifically, they are all known as tropical cyclones. Hurricanes occur in the Atlantic and Northeast Pacific. Typhoons are found in the Northwest Pacific Ocean. In the South Pacific and the Indian Ocean, the same type of storm is called a cyclone.

Why is Cyclone Phailin sometimes called a super typhoon, super cyclone, or superstorm?

Cyclone Phailin was also called a super typhoon, super cyclone, and superstorm because of its sustained winds of more than 150 mph before it made landfall in India.

Is India a disaster-prone country?

India may not be the most disaster-prone country, but with its large population, India consistently has one of the largest number of people displaced by natural disasters. In 2017, India ranked fifth worldwide with 1.3 million people displaced due to hazards such as floods (caused by annual monsoons), heatwaves, and landslides. In 2016, disasters displaced about 2.4 million people.

How can I help children and families in India?

How did World Vision prepare for and respond to Cyclone Phailin?

World Vision has worked to improve the lives of children and families in India since 1962. At the time of Cyclone Phailin, the organization served families in more than 5,300 urban, rural, and tribal communities across 26 states, impacting the lives of 2.4 million children.

World Vision’s community disaster preparedness training played an essential role in the successful evacuation of tens of thousands of people ahead of the storm. In Ranpur, a small town in Odisha’s Nayagarh district, 40 community task force teams trained by World Vision coordinated the evacuation of 12,000 people. The task force includes men, women, and youth from within the community who are trained in disaster preparedness, including search and rescue, basic first aid, and protecting livestock.

In Jagatsinghpur district, World Vision provided megaphones, life jackets, torchlights, and ropes to equip the community task force. Task force members used the megaphone’s siren to alert and call villagers together to evacuate. “We are happy how small yet important things like the megaphones can help in such crucial times,” says Dharmender, director of World Vision’s work in Nirman.

World Vision was one of the first aid agencies to begin distributing relief supplies to families affected by Cyclone Phailin. Family food kits and household kits were pre-positioned to be available as soon as the roads were opened.

Sponsoring a child in India is a personal way to show God’s love to a child in need.