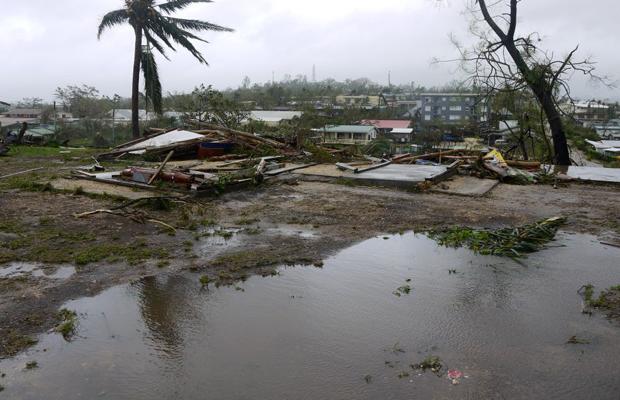 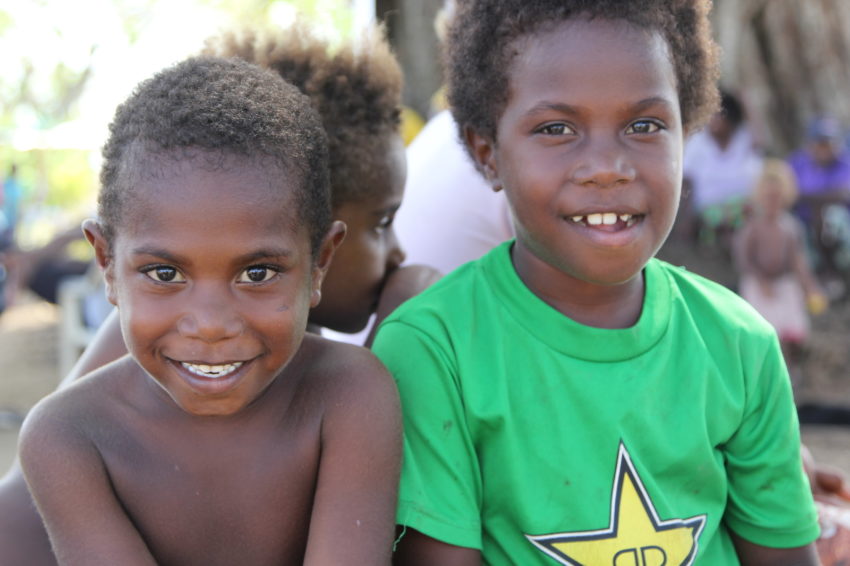 Though their village near Port Vila was destroyed by Cyclone Pam, Brian, 5, and Denisha, 6, show that, like their country's welcome banner, #Vanuatustillsmiles. World Vision distributed tarps, kitchen kits, and hygiene kits to the village so families could patch up their homes, boil water, and help prevent the spread of disease. (©2015 World Vision/photo by Andrea Swinburne Jones) 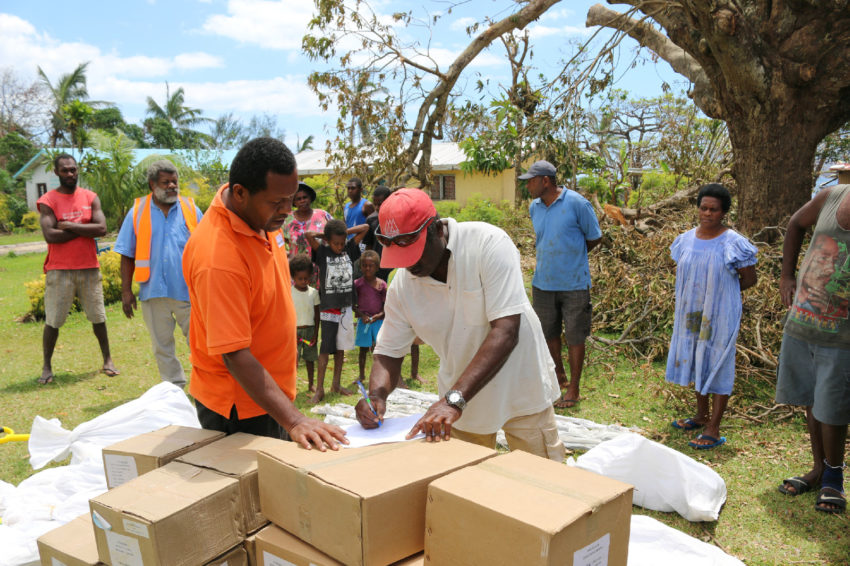 In the wake of Cyclone Pam, World Vision worked with communities across Shefa, Tafea, and Penama Provinces to distribute essential items such as tarpaulins and shelter kits, kitchen kits, tool kits, as well as helping with government food distributions. (©2015 World Vision/photo by Jodi Devine)

Staff prepare for a food distribution to Vanuatu islanders who lost homes and crops to Cyclone Pam. (©2015 World Vision/photo by Mike Wolfe) 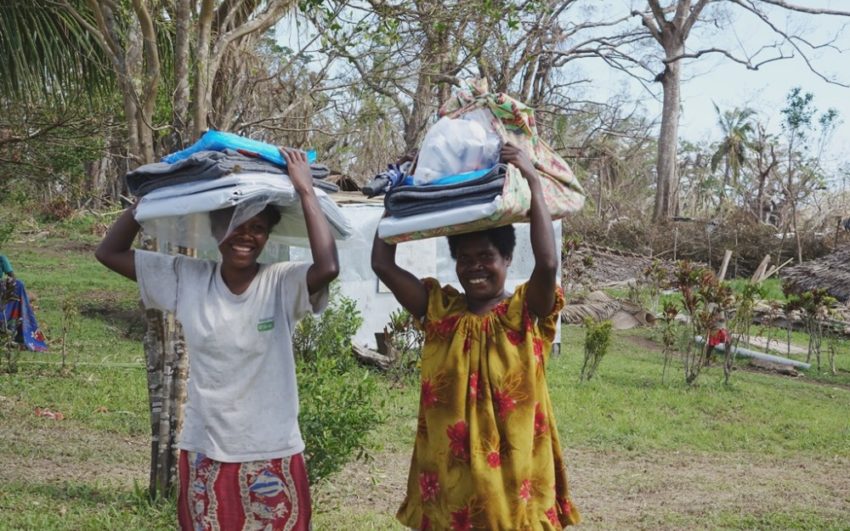 One of the major challenges of the Cyclone Pam response was reaching parts of several islands that were inaccessible by road. Relief items that arrived by ship had to be loaded onto smaller boats that could off-loaded onto beaches. (©2015 World Vision/photo by Katharina Witkowski)

On March 13, 2015, Cyclone Pam struck Vanuatu, an archipelago of more than 80 islands in the South Pacific that is home to about 270,000 people. The eye of the Category 5 cyclone passed close to Efate Island, where the capital Port Vila is located, with sustained winds up to 160 miles per hour. Overall, the storm affected 188,000 people — more than half of the national population — and all six provinces.

Southernmost provinces Tafea and Shefa were hardest hit, with 50–90% of shelters destroyed. Most families in Vanuatu live in rural, agricultural communities with homes made of wood and mud that are very vulnerable to storms and flooding. Because of early warning, most people had time to seek safe shelter, keeping the death toll low at 11,  though food stocks, water sources, and crops were damaged, leaving communities hungry and vulnerable.

In early March 2015, a southward tracking tropical disturbance intensified northeast of the Solomon Islands until it became a powerful tropical cyclone.

FAQs: What you need to know about Cyclone Pam and Vanuatu

Explore frequently asked questions about Vanuatu and Cyclone Pam, and learn how you can help people affected by disasters:

Where is Vanuatu? Tell me more about it.

Vanuatu, formerly called New Hebrides, is an archipelago spread over 80 islands located in the South Pacific Ocean 1,000 miles east of Australia. About 270,000 people reside in Vanuatu, and the average per capita income is $3,130.

Is Vanuatu at high risk for natural disasters?

Vanuatu is vulnerable to frequent tropical storms, as well as earthquakes, volcanoes, and tsunamis. Many areas of the country are low-lying and prone to coastal flooding. Because Vanuatu is small, when a tropical storm or other disaster hits, it will very likely affect the whole country, including the capital and seat of government, Port Vila. Difficulties in transportation and communication between islands and in rural areas make it hard to recover from disasters.

Every year, 64% of Vanuatu’s population is exposed to natural hazards. Families dependent on subsistence agriculture for their food supply, and the 10% of the population in extreme poverty are especially vulnerable to shocks like cyclones. Cyclone Pam, for example, destroyed not only crops in the field that families needed for food, it destroyed banana and coconut plantations that were a vital source of income.

The United Nations University’s Institute for Environment and Human Security has ranked Vanuatu as the country most at-risk for natural hazards four years in a row in its annual World Risk Index.

Why did such a forceful storm cause only 11 deaths in Vanuatu?

Vanuatu’s early warning system was activated so text and media messages went out in time for the public to evacuate and assist their neighbors in reaching designated shelters that had been stocked with relief goods and prepared to accommodate them. Since most of the population lives in tight-knit, rural communities and are familiar with the natural hazards of the island home, people were able to hunker down in shelters prior to Cyclone Pam’s 160-mph winds hitting the islands.

World Vision began working in Vanuatu in the early 1980s with education, training, and income-generating projects. We have since expanded to include water, sanitation, and hygiene (WASH); agriculture; economic empowerment; education; early childhood development; and disaster risk reduction and preparedness. Today, we work in the four provinces of Tafea, Sanma, Efate, and Penama.

World Vision staff communicator Chloe Morrison reported days before the storm, “Our World Vision staff has been amazing — visiting communities to warn them of the cyclone, helping families to protect their houses, and informing villages at risk of where evacuation centers are — all while preparing their own families and homes for what is on track to be Vanuatu’s most devastating cyclone in almost 30 years.”

After one year, World Vision had:

When disaster strikes, World Vision is there. Help us respond to disasters like Cyclone Pam.