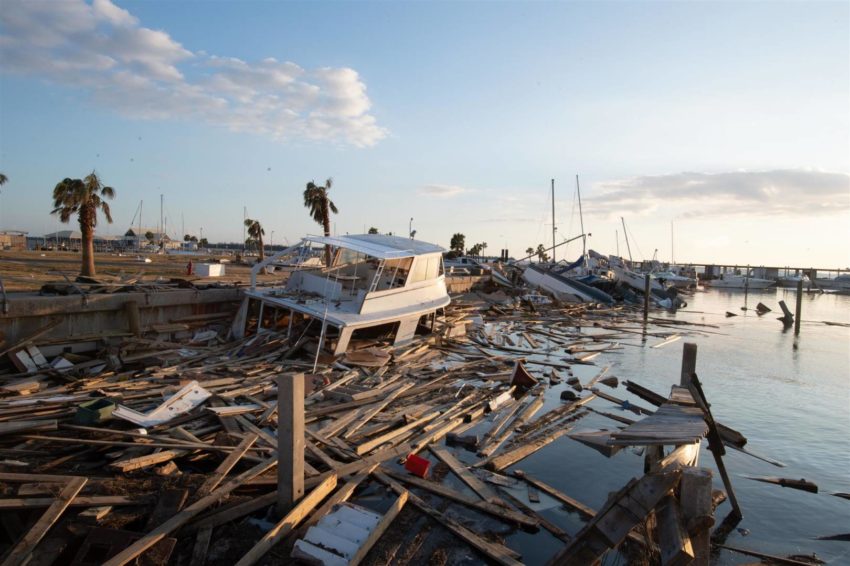 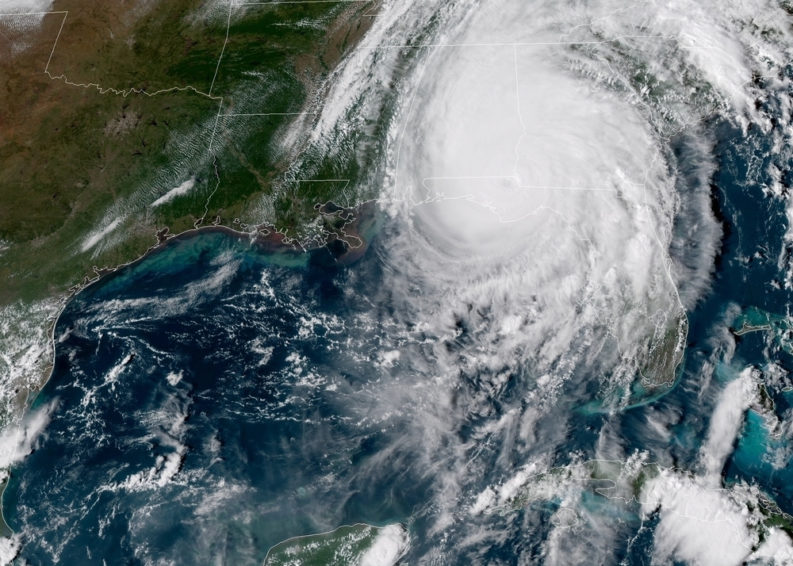 A satellite image of Hurricane Michael shows the Category 4 storm in the Gulf of Mexico on Oct. 10. (Image courtesy of NOAA) 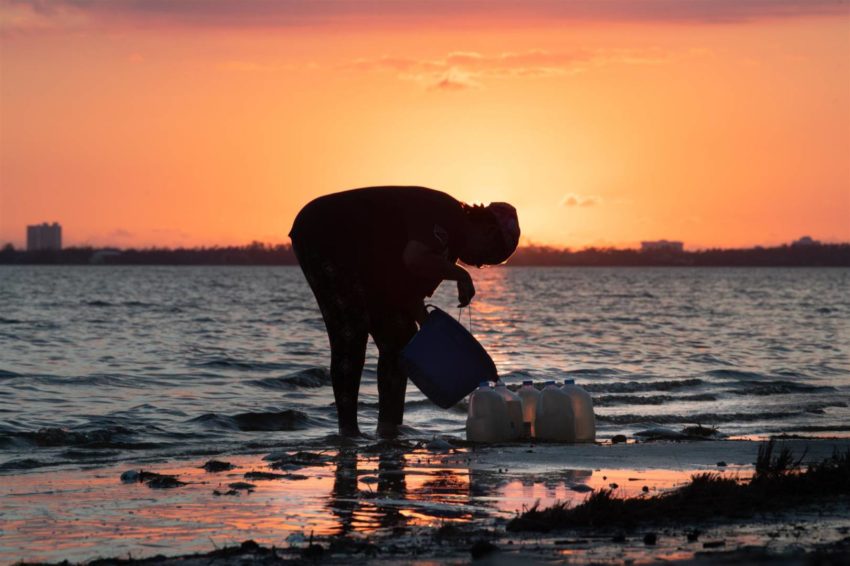 In the aftermath of Hurricane Michael, a woman in Panama City, Florida, fills jerry cans with water to carry home. The Florida Panhandle sustained massive damage from the Category 4 storm that made landfall on Oct. 10. (©2018 Genesis Photo Agency/photo by Michael Spooneybarger) 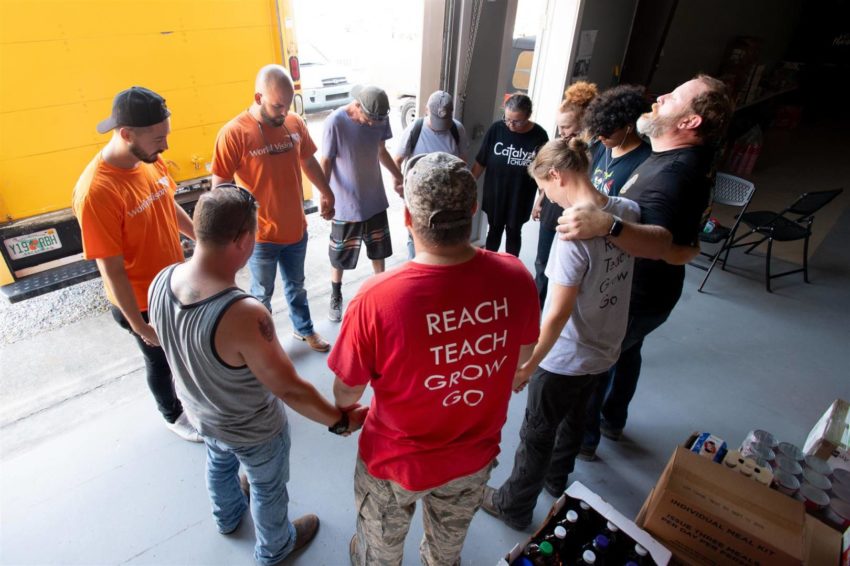 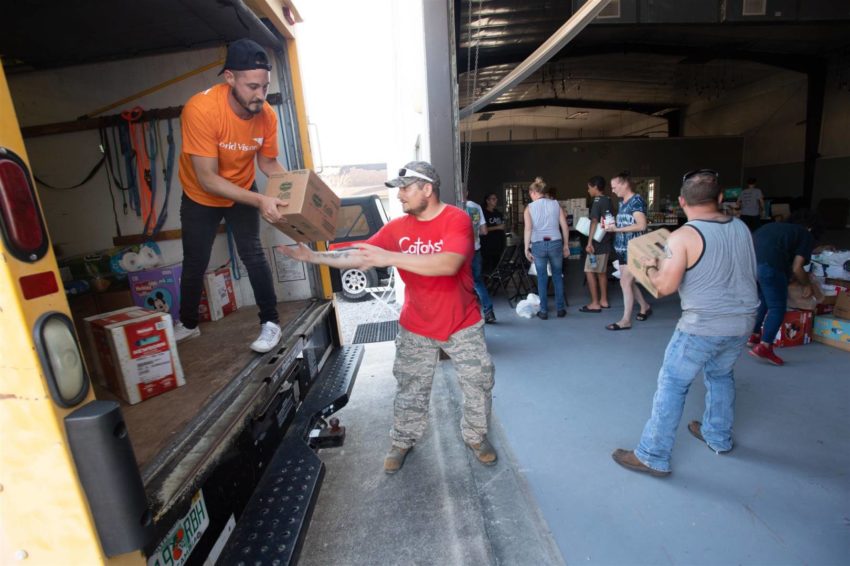 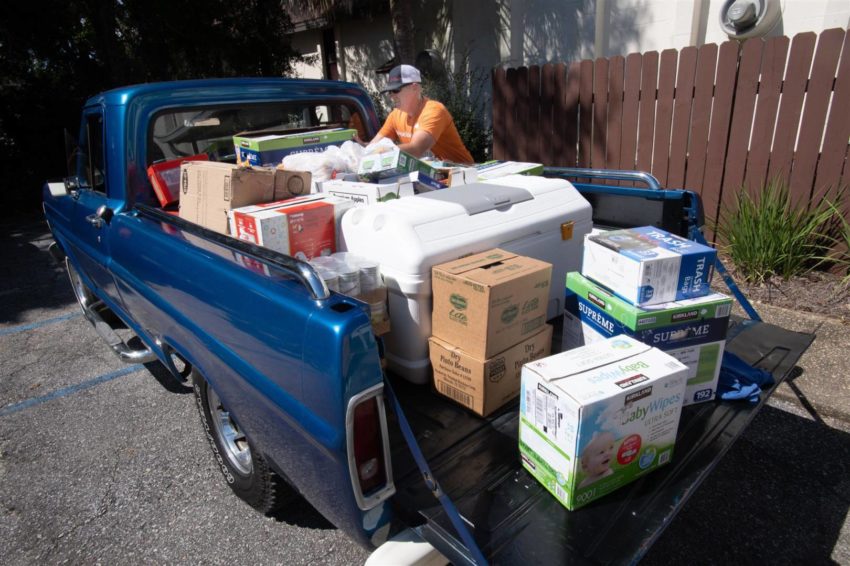 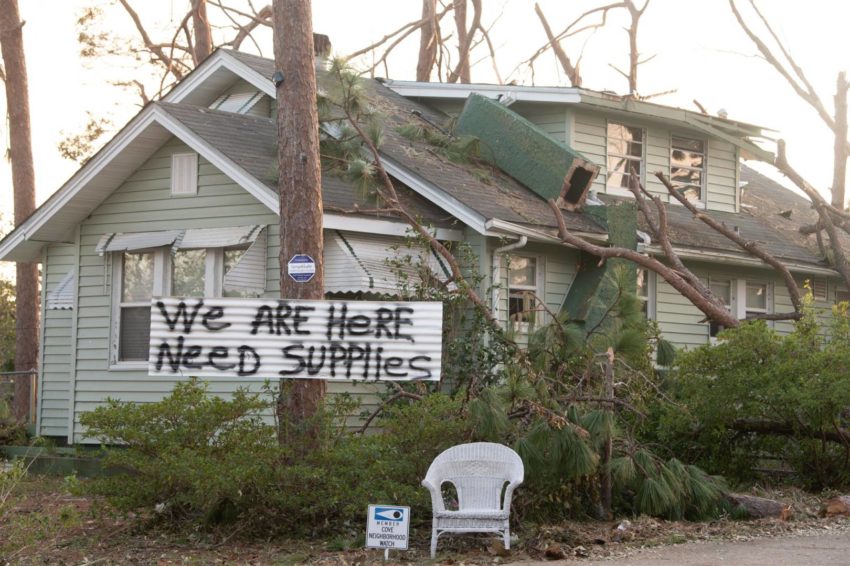 Recovery will be a long time coming for residents of the Florida Panhandle, which bore the brunt of Hurricane Michael's Category 4 landfall. Less than a week after the storm hit on Oct. 10, access remains difficult, stores are closed, and supplies are limited. (©2018 Genesis Photo Agency/photo by Michael Spooneybarger) 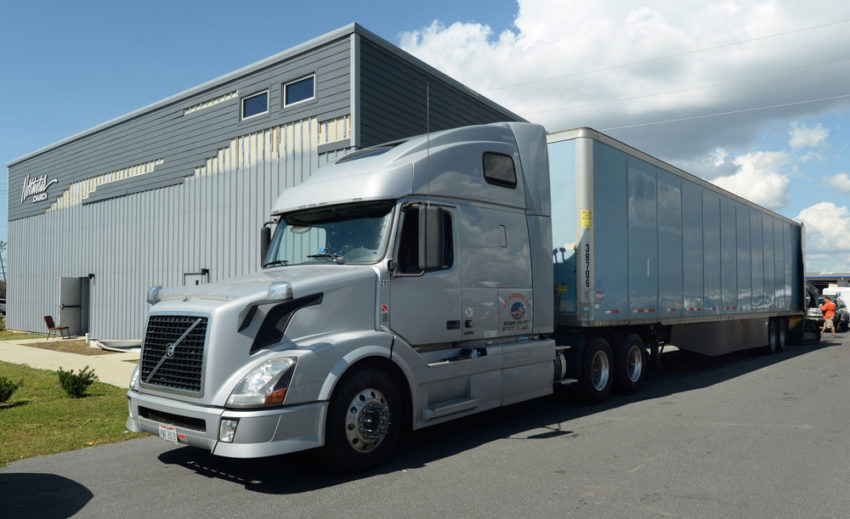 A semitrailer loaded with items donated by World Vision is parked at Northstar Church in Callaway, Florida, on Wednesday, Oct. 17. (©2018 Genesis Photo Agency/photo by Andrew Wardlow) 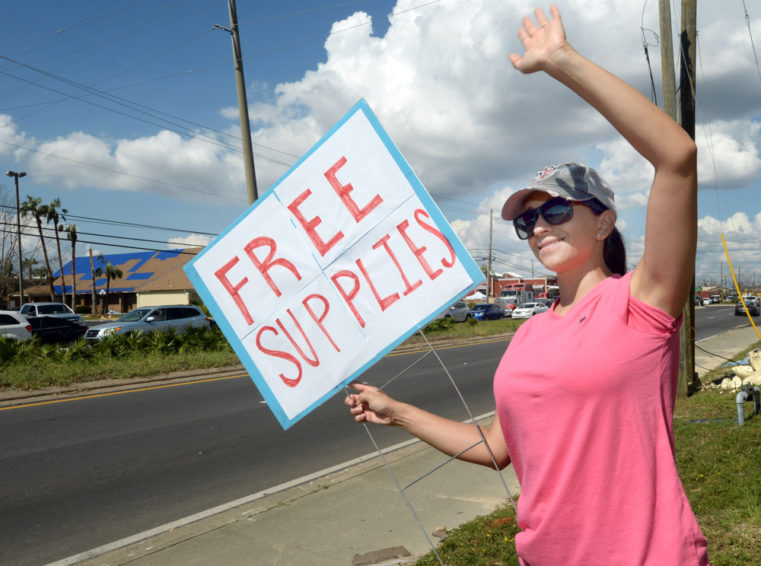 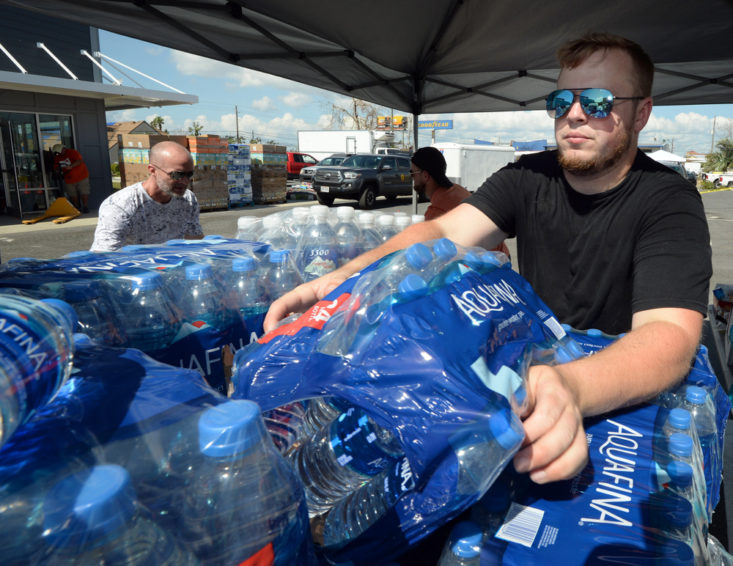 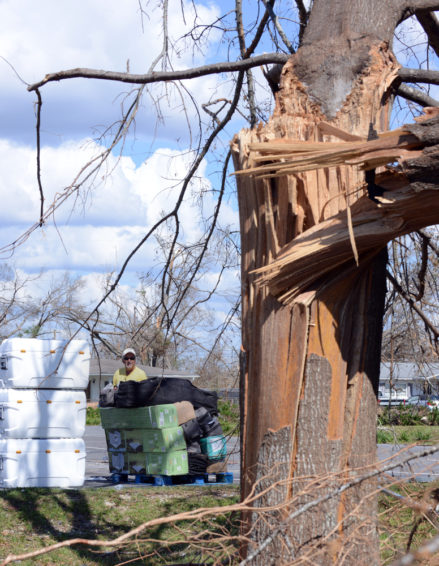 Randy Hebert takes shrink wrap off of a pallet of supplies donated by World Vision at Northstar Church in Callaway, Florida, on Wednesday, Oct. 17. (©2018 Genesis Photo Agency/photo by Andrew Wardlow) 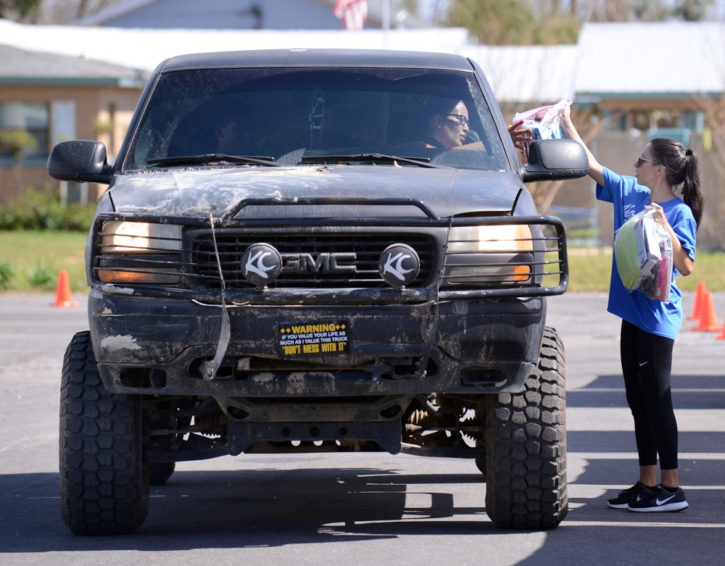 Hannah Farris hands out food and other essential items to a family impacted by Hurricane Michael at Northstar Church in Callaway, Florida, on Wednesday, Oct. 17. (©2018 Genesis Photo Agency/photo by Andrew Wardlow)

So far, 35 deaths have been attributed to Hurricane Michael. Scores of people are still missing in the hardest-hit areas. Communities from the Florida Panhandle through Georgia to the Carolinas and Virginia are still cleaning up, clearing debris, and taking stock of destroyed and damaged buildings as well as downed trees and power lines.

“My car … my house … my whole life is totaled,” says Michelle, who lives in Panama City, Florida. She spoke with Nate Youngblood, one of World Vision’s domestic disaster response staff members. Nate is in the Gulf Coast region to coordinate shipments of supplies to local churches so they can distribute clean-up kits, hygiene supplies, and other needed items.

“It’s terrible man. I don’t know how to explain it. No businesses are open. People are just doing what they can do,” says Pastor Chris Washington of Beacon Light Community Church in Panama City. He and a group of volunteers distributed relief supplies to about 300 people Oct. 18 at the church. “This is going to be a long recovery here.”

You can deliver hope and practical help when disasters like Hurricane Michael strike.

FAQs: What you need to know about Hurricane Michael

Explore frequently asked questions about hurricanes and Hurricane Michael, including how you can help people affected.

How did Hurricane Michael develop?

Tracking north through the Gulf of Mexico, Hurricane Michael’s route was well predicted; its intensity was not. Hurricane Michael did not weaken as expected as it skirted Florida’s west coast. Instead, it accelerated to a Category 4 storm, making quick time toward the Florida Panhandle.

As Michael slammed the coastline on Wednesday afternoon, Oct. 10, its 155-mph winds pushed the threshold of a Category 5 storm. National Weather Service Director Louis Uccellini called it “a worst-case scenario for the Florida Panhandle.”

Where and when did Hurricane Michael make landfall?

Hurricane Michael made landfall in the Florida Panhandle early Wednesday afternoon, Oct. 10, with a direct hit on Mexico Beach, a small sport-fishing coastal town with fewer than 1,200 permanent residents —  a third of them aged 65 or older. It had mostly concrete block homes and small vacation cottages that are now nearly wiped off the map.

How much damage did Hurricane Michael cause?

Hurricane Michael left immense destruction in its wake. The storm surge buckled roads and washed out foundations, high winds and rain-soaked ground caused roofs, trees, and power poles and lines to fall. Initial estimates of property damage are in excess of $4.5 billion. Damage estimates to Florida’s forestland are currently at $3 billion.

How long will it take the Florida Panhandle to recover?

It’s too soon to tell the cost and timetable for recovery and rebuilding. The view to the future and the challenges ahead are still being determined, officials say, but in worst-hit areas, it will be years rather than months before life will be back to normal.

When was the Florida Panhandle last hit by a hurricane?

Hurricane Hermine came ashore in September 2016 as a Category 1 hurricane, ending a 10-year span without a hurricane landfall. The most recent major hurricane was Category 3 Dennis, which made landfall in 2005 with 120-mph winds. Dennis joined a rogue’s gallery of memorable storms that did massive damage to coastal areas, including:

How is World Vision responding to Hurricane Michael?

Four semitrailers of World Vision relief supplies were sent to the Florida Panhandle as soon as roads were cleared. They are being distributed by local partners in Pensacola, Panama City, Panama City Beach, and Mexico Beach.

Each load transports enough supplies to serve up to 1,500 people with relief items that include food, clean water, coolers, hygiene supplies, diapers, cleaning supplies, bedding and inflatable beds, as well as temporary shelter items such as tents, tarps, and canopies.

In Albany, in a hard-hit area of southwest Georgia, long-term World Vision partners are distributing pre-positioned relief goods, and more supplies are on the way.

How can I help people affected by Hurricane Michael?

Pray: Please join us in prayer for people affected by Hurricane Michael. Almighty Father, we ask for Your care and protection for people who have suffered losses because of this devastating storm. Uphold them with Your mighty arm as they face the challenging days ahead. We ask you also to equip and encourage those who provide relief and assistance now that the storm has passed. Strengthen the minds and bodies of first responders for the days ahead.

Give: Your gift will help to provide urgent relief that people in the U.S. affected by disasters like Hurricane Michael desperately need.