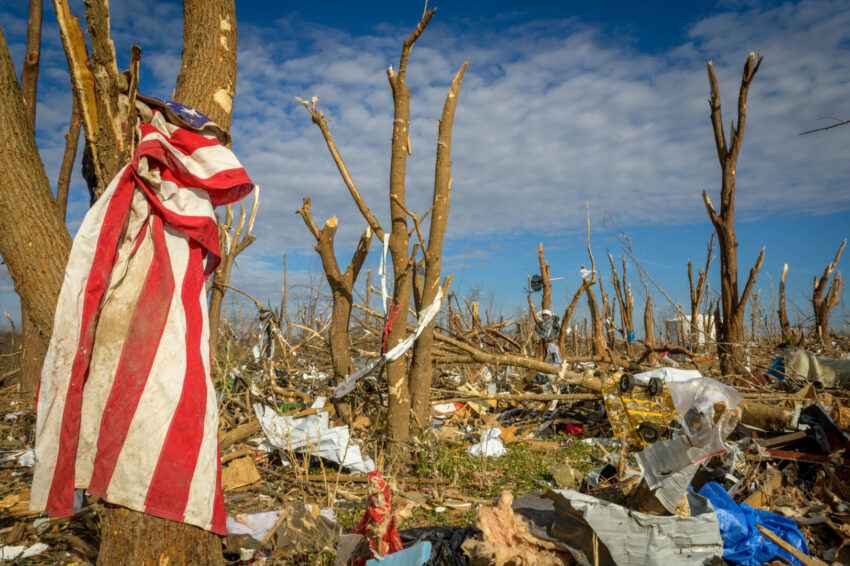 An American flag is twisted and tangled between tree limbs in Mayfield, Kentucky, on December 14, 2021. Massive search and rescue operations are underway after deadly and destructive tornadoes hit the Bluegrass State and five others on December 10, 2021. (©2021 World Vision/photo by Laura Reinhardt)

Collapsed buildings and leveled structures were among the heartbreaking scenes in Mayfield, Kentucky, where a devastating tornado hit on December 10, 2021. (©2021 World Vision/photo by Laura Reinhardt) 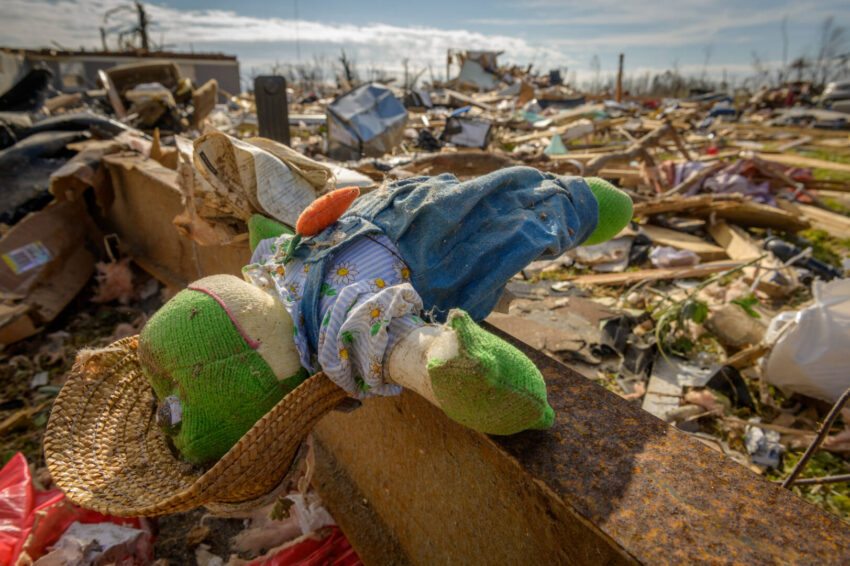 A stuffed toy is a heartbreaking reminder of what once belonged to a family in a neighborhood in Mayfield, Kentucky, one of the worst-hit communities of a series of destructive tornadoes that hit six states on December 10, 2021. (©2021 World Vision/photo by Laura Reinhardt) 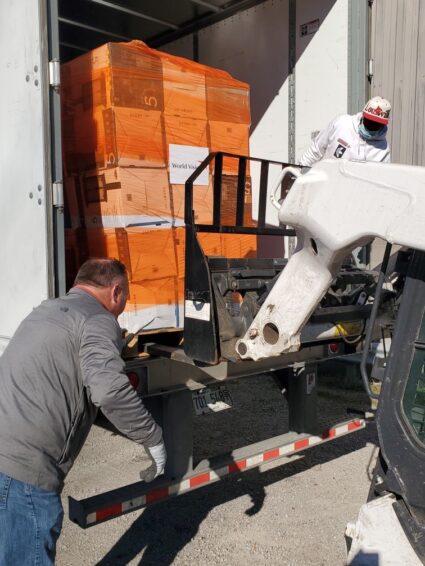 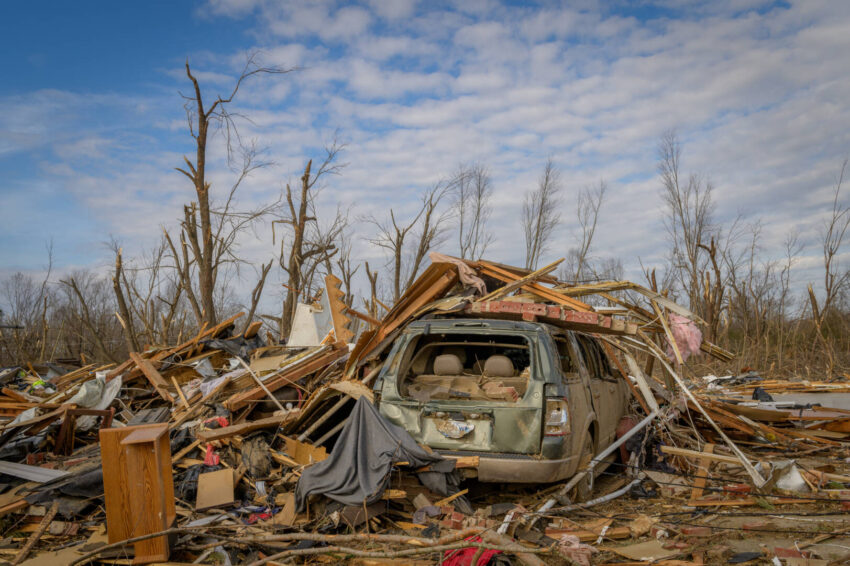 A vehicle, buried underneath piles of debris, is among the scenes of destruction in Mayfield, Kentucky, on December 14, 2021. (©2021 World Vision/photo by Laura Reinhardt) 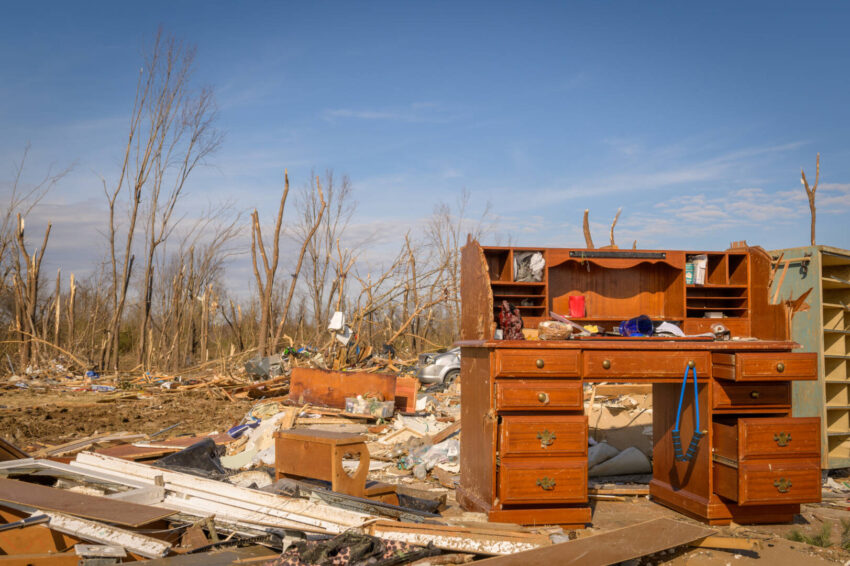 Heartbreaking scenes of strewn furniture and piles of debris in a neighborhood in Mayfield, Kentucky, on December 14, 2021. (©2021 World Vision/photo by Laura Reinhardt) 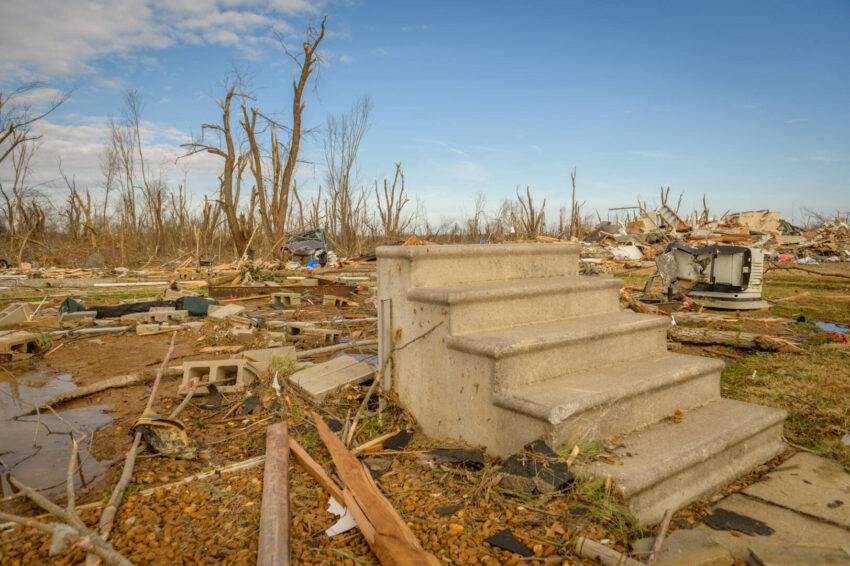 Concrete stairs lead to clouds and blue sky amid a scene of devastation in Mayfield, Kentucky, on December 14, 2021. A destructive tornado leveled the neighborhood in this historic town on December 10, 2021. (©2021 World Vision/photo by Laura Reinhardt) 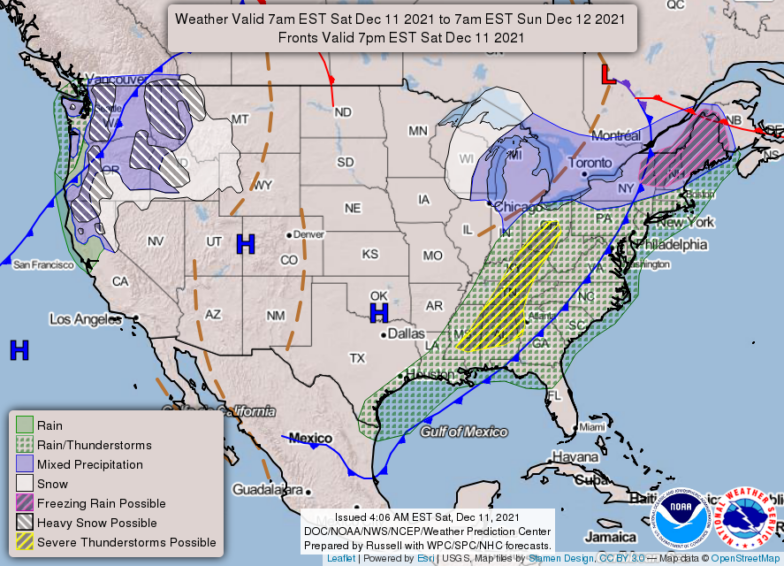 A static image of the U.S. map shows the weather forecast for the nation and tornado-hit areas of the South and Midwest. (©2021 photo courtesy of The National Weather Service)

A series of deadly tornadoes left a trail of devastation across more than 200 miles of the U.S. Midwest and South late Friday, December 10, 2021, affecting hundreds of thousands in Arkansas, Illinois, Kentucky, Mississippi, Missouri, and Tennessee. The death toll rose to 90, including 77 in Kentucky.

Kentucky Gov. Andy Beshear called it “the most devastating tornado event in our state’s history.” Kentucky recorded at least four twisters, including one that tore across more than 200 miles and multiple states.

Search-and-rescue efforts were underway in several states as the storms left thousands without power and many with devastating damage to their homes during the busy Christmas season.

World Vision is helping to assess the impact and has shipped a convoy of three trucks loaded with emergency relief supplies to Kentucky churches and other relief sites in areas affected by the storms.

FAQs: What you need to know about the tornadoes in the South and Midwest

Explore facts and frequently asked questions about the tornadoes that hit the South and Midwest in December 2021, including how you can help people impacted, and please join us in prayer for affected children and families.

Fast facts: Tornadoes in the South and Midwest

How did the storms develop?

The twisters were part of a weather system that also caused snowfall in the upper Midwest and western Great Lakes.

It originated in Arkansas and moved to Missouri and Tennessee before barreling through Kentucky, according to Michael Dossett, director of the Kentucky Division of Emergency Management.

Learn more about tornado facts and how to prepare.

How is World Vision responding to the tornadoes?

“We are just trying to be hands and feet of Jesus Christ,” said Pastor Derrick Scobey of Ebenezer Baptist Church in Oklahoma City, Oklahoma — a World Vision partner. He joined relief efforts in Kentucky, where a shipment of critical supplies was being readied for impacted families in Mayfield, Kentucky.

Karima Bright lives in Mayfield, one of the hardest-hit communities. She and her 7-year-old grandson survived the terrifying storm by sheltering inside their home’s only closet.

“He was so scared,” Karima told “CBS Evening News.” “I said, ‘We’re going to be okay. We’re going to make it. Just hold on, hold on, hold on.’” Karim credits God for saving them. She spoke tearfully as she described the discovery of her late son’s Bible among the debris, “It’s all God because He saved us.”

How can I help people affected by the tornadoes and other disasters in the U.S.?

When disaster strikes, World Vision is there. Help us respond to tornadoes like the ones in the South and Midwest.