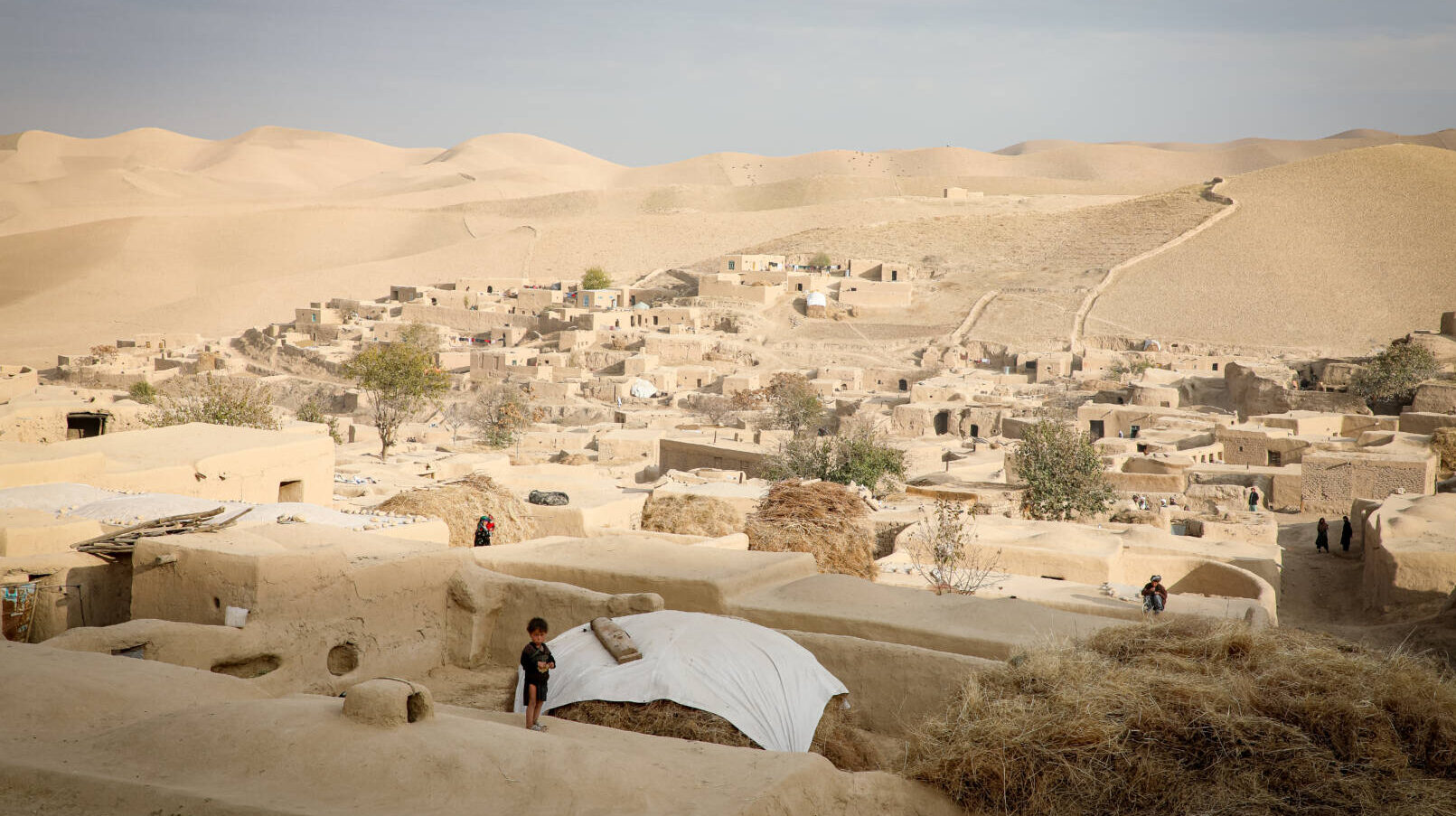 The humanitarian crisis in Afghanistan is becoming the worst in the world.

Poverty, conflict, drought, and the ongoing COVID-19 pandemic during the government’s transition of power have led to increased hunger, a near-collapse of the health system, and the destruction of family livelihoods — all adding up to threaten mass child starvation. As hunger spreads, health clinics are filling up with malnourished children under 5 with symptoms such as pneumonia, acute diarrhea, and emaciation.

“My bones ache,” said one World Vision aid worker returning from visits to clinics in Afghanistan. “Too many children are perishing.”

An estimated 22.8 million Afghan people, more than half the country’s population, are facing potentially life-threatening levels of food insecurity and malnutrition this year. Half of all children under 5 — around 3.2 million — were expected to suffer from acute malnutrition by the end of 2021. About 1 million are on the brink of starvation.

They’re children like 1-year-old Ahmad*. Orphaned 10 days after his birth, Ahmad couldn’t stop crying during a checkup at a health clinic, one of 21 operated by World Vision in four of Afghanistan’s provinces.

“He has been having diarrhea and fever,” said Aina*, an Afghan mother of six who is caring for Ahmad. Ahmad’s sunken eyes and transparent-looking skin signaled severe deficiencies of vitamins and nutrients; he was suffering from acute malnutrition. “I think it is because he has been eating what we are eating. We do not have money to buy baby food or milk for him,” explained Aina.

Conflict forced Aina and her family from their hometown three years ago. They found temporary shelter in a camp near Herat, the third-largest city in Afghanistan and one of World Vision’s primary program areas. There they met Ahmad’s mother and sister, who died during the upheaval and unrest. Ahmad was his family’s sole survivor.

Now, Aina struggled to keep Ahmad alive. She hoped doses of medicine and emergency food would bring life back into his weakened body. “This clinic is all the help that we get, and we are very glad,” she says.

But more help is needed.

“Day by day, the situation is deteriorating in this country, and especially for children who are suffering,” says Asuntha Charles, national director of World Vision Afghanistan.

That’s why World Vision is committed to continue delivering life-saving aid to children and families, as we have in Afghanistan for 20 years — providing food, healthcare, access to clean water and sanitation and hygiene support, and more. Since September 2021, we’ve reached 449,646 people.

“Afghan children dream to be educated and enjoy fullness of life — they deserve nothing less,” says Edgar Sandoval Sr., president and CEO of World Vision U.S. “We must act together now to prevent an unprecedented humanitarian disaster and to support the children of Afghanistan and their families in the coming weeks and months.”

Days begin and end with hunger

Nine-month-old Salma* weighed no more than a newborn, even with the multiple layers of clothing she was wrapped in. She was too weak to even cry.

“Children like [Salma] should be playing and enjoying their life,” says Asuntha, holding the girl. “But in a country like Afghanistan, they are struggling without food to eat. [Salma] is here because she is so malnourished.”

At the clinic, medical staff measure the circumference of children’s upper arms to determine the extent of their malnutrition. The most severely malnourished are sent to specialist nutrition wards in hospitals. “Those wards are filling with children, sometimes several to a bed, and deaths are increasingly commonplace,” says Asuntha.

In September 2021, the poverty rate in Afghanistan hit 72%. According to the United Nations, an estimated 97% of the population could be plunged into poverty by the middle of this year. Increased poverty and ongoing conflict will lead to more families being driven from their homes.

Afghanistan’s displacement crisis is one of the largest and most protracted in history, according to U.N. High Commissioner for Refugees Filippo Grandi, with more than 5 million people in prolonged displacement. The number has shot up within the last year — many of them children who aren’t getting enough to eat.

“Honestly, I couldn’t sleep last night thinking of a small girl,” says Asuntha, “a 12-year-old who looked so much younger than her age. She looked 5 years old. She was stunted in growth, highly malnourished — she was skin and bones. When I looked in her eyes, I could see she was pleading with me: ‘Please, can you do something? I want to be a normal child.’ I can’t forget her eyes; they were trying to tell me what was in her heart, her very being — ‘I want to survive, I want to live a normal life.’”

Against this backdrop of turmoil and food insecurity, communities are also running out of water because of drought.

In Badghis province, one of the 34 provinces of Afghanistan, severe drought conditions led to the failure of the 2020 winter harvest and withered crops that were planted for the 2021 spring growing season.

It’s estimated that 60% of livestock have died or been sold off for minimal gain to provide for livelihoods, and that 40% of wells have dried up because of water scarcity. Dry conditions have continued through 2022.

World Vision works to ensure thirsty communities are served, with a primary focus on providing households, schools, and health facilities with lasting solutions for clean water. As a result of this critical work, thousands of people are now able to access clean water through a solar-powered piped water network in Herat.

World Vision is currently serving children and families in over 2,000 villages throughout Afghanistan, and we’re well placed to continue responding.

In the face of this grave humanitarian crisis, we aim to help 1 million Afghans over the coming months through proven programs in areas including food and nutrition assistance; healthcare; child protection; and clean water, sanitation, and hygiene.

By partnering with local community leaders in Afghanistan for many years, we’ve been able to respond to crises and equip them to help create positive, sustainable change in their communities.

Our work has included training hundreds of community health workers to distribute information and promote progress in areas that impact health, such as proper nutrition, access to clean water, the importance of latrines, and more — as well as training more than 300 midwives to care for pregnant women and their children before, during, and after birth.

“We cannot abandon them”

The COVID-19 pandemic created additional risks to Afghan children, including by limiting their access to education, health and social services, child protection activities, and safe spaces. In a country with a population of close to 40 million, only 5.7 million vaccine doses have been given, while 177,255 cases and 7,656 deaths have been reported as of March 23, 2022 (with actual figures likely higher).

As of August 2021, our COVID-19 response — which includes scaling prevention measures to slow the spread of the virus, supporting health workers, and more — has helped protect 663,672 people, including 314,492 children.

Our dedicated staff will continue their work to empower families, children, communities, and local partners to prevent and respond to exploitation, neglect, abuse, and other forms of violence affecting children, especially girls. Our approach is to target the root causes of child homelessness, neglect, and disempowerment through programs centered on healthcare, school feeding, formal education, and life skills training.

Our recently launched start-up project to protect children is already benefiting over 400 households.

“Extreme vulnerabilities and fear are at record levels, and children are at greater risk of violence, abuse, and exploitation,” says Asuntha, the national director. “Families who are already struggling to survive destitution related to this conflict, a devastating drought, and the effects of COVID-19 are now resorting to the most desperate of measures to protect their children, including child marriage.

“History has shown that the resilience and fortitude of the Afghan people is extraordinary. But it has its limits. They are now at their most vulnerable — and we cannot abandon them.”