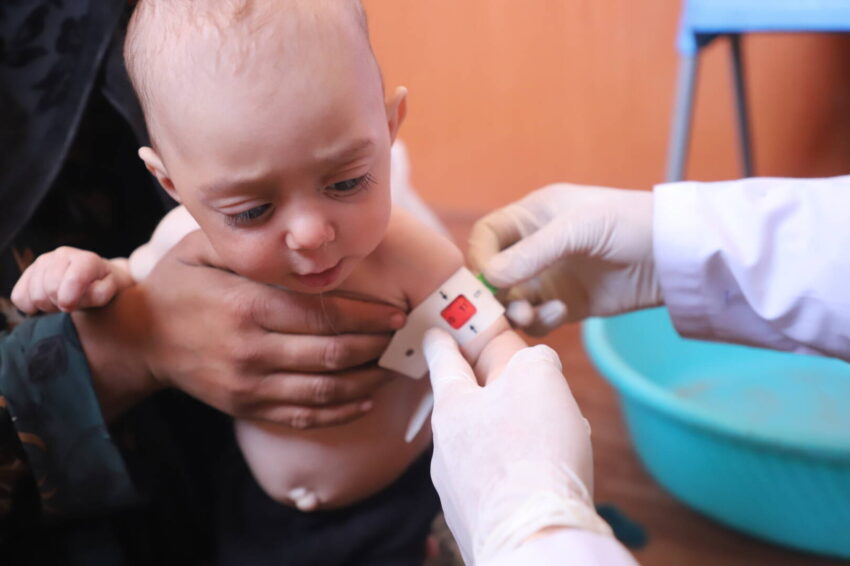 A community health worker measures the mid-upper arm circumference (MUAC) of a child in Afghanistan, where food insecurity and prolonged drought are driving a hunger crisis. Red in the MUAC tape indicates severe acute malnutrition. The child was treated at a mobile health clinic supported by World Vision in Afghanistan, where about 20 million people are facing acute hunger in 2022. (©2022 World Vision) 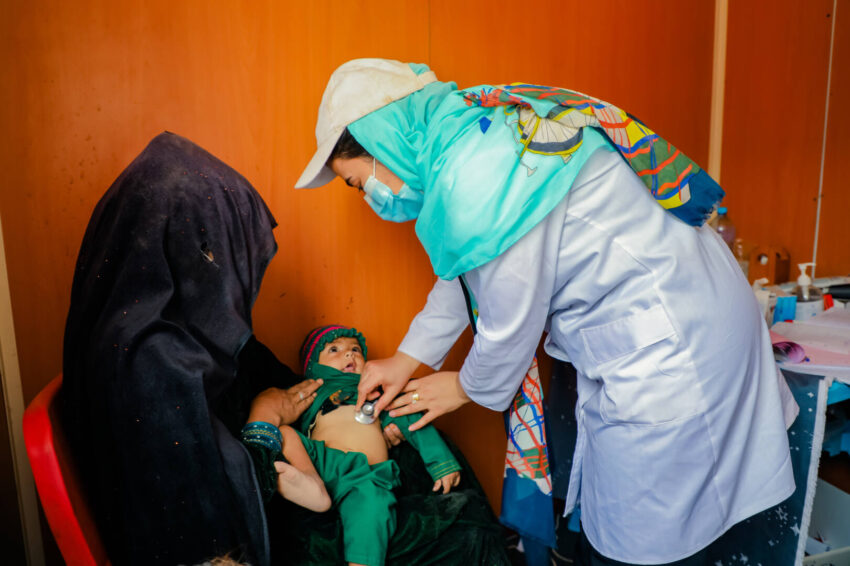 A child receives treatment at a World Vision–supported health and nutrition program in Afghanistan. (©2022 World Vision) 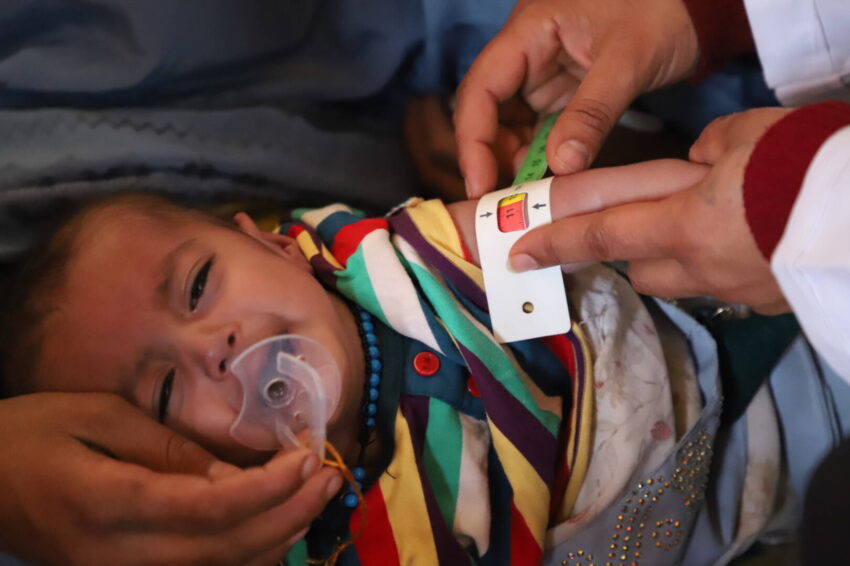 A healthcare worker screens an Afghan child for malnutrition in a health clinic in Afghanistan. (©2022 World Vision) 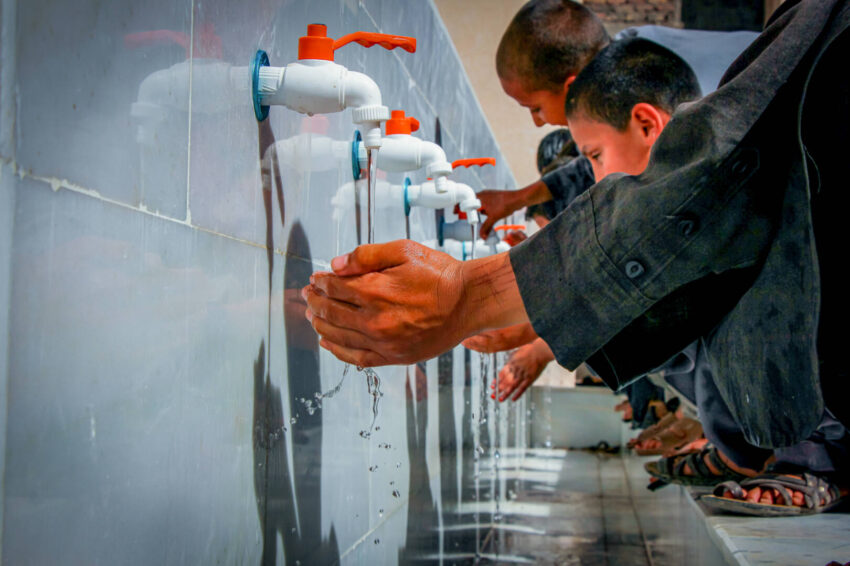 Afghan residents get clean water from a World Vision water purification center. Access to clean water remains paramount to the health and safety of children. World Vision works to ensure thirsty communities are served, with a primary focus on providing households, schools, and health facilities with lasting solutions for clean water. As a result of this critical work, thousands of people are now able to access clean water through a solar-powered piped water network in Herat, Afghanistan. (©2020 World Vision) 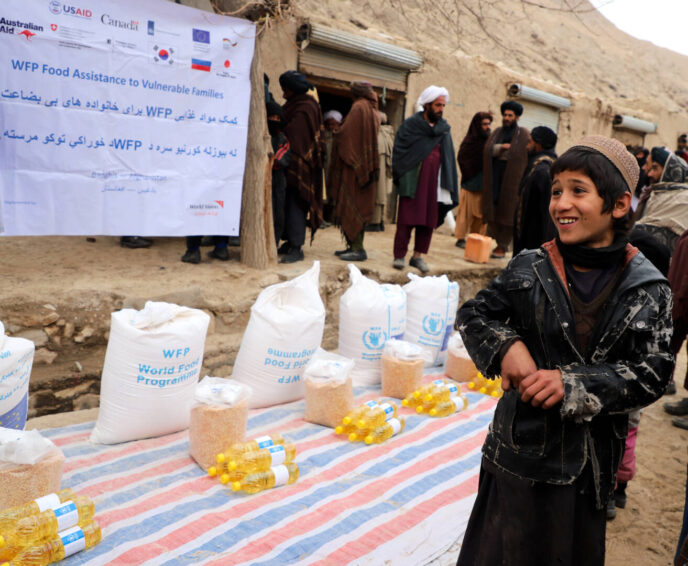 A boy stands next to a row of emergency food supplies at an aid distribution site in Afghanistan. The World Vision–supported distribution was in partnership with the World Food Programme (WFP). World Vision is WFP’s largest implementing partner worldwide. (©2021 World Vision) 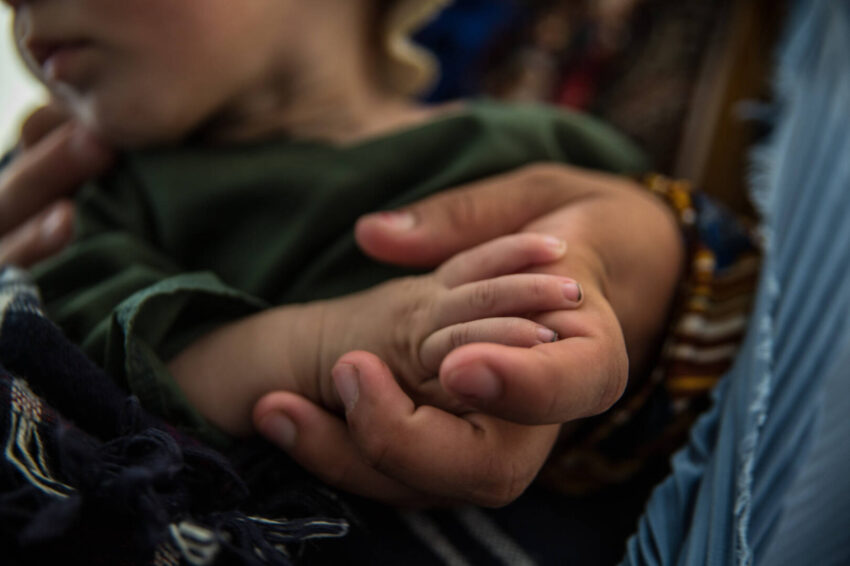 Malnutrition is a growing concern in Afghanistan because of lack of access to food, poor childcare and feeding practices, and illness. (©2019 World Vision)

Children and families in Afghanistan are facing a growing humanitarian crisis, the result of decades of conflict, chronic poverty, recurrent natural disasters, and the continuing impacts of COVID-19.

The dire situation includes a hunger crisis, a near-collapse of the health system, devastation to schools, and the destruction of family livelihoods.

FAQs: What you need to know about the Afghanistan humanitarian crisis

Explore facts and frequently asked questions about the humanitarian crisis in Afghanistan, and learn how to help Afghan children and their families.

Afghanistan is now facing one of the worst humanitarian crises in the world. The landlocked country has been mired in conflict, drought, extreme poverty, and the effects of the coronavirus pandemic.

Decades of conflict, displacement, poverty, and extreme weather have ravaged Afghanistan. Compounding the extreme conditions is a hunger crisis. This fall, nearly 13 million in the south-central Asian country are expected to experience high levels of food insecurity.

How many Afghans are forcibly displaced?

About 2.3 million people from Afghanistan are refugees and asylum-seekers, representing one of the largest long-term refugee situations in the world. According to the U.N. migration agency, some 700,000 Afghans were forced to flee their homes in 2021, adding to the 5.5 million Afghans who were already displaced in past years.

Neighboring Pakistan hosts nearly 1.4 million Afghan refugees, including some second- and third-generation Afghans who have never lived in their home country.

Why is Afghanistan facing a hunger crisis?

Recurrent drought, the COVID-19 pandemic, and years of conflict have all contributed to high levels of food insecurity in Afghanistan. Malnutrition in children is exacerbated by poor childcare and feeding practices and by the spread of illnesses such as acute watery diarrhea. Afghans are also facing a water crisis, meaning communities are unable to get enough water for livestock and agriculture (as well as for drinking and hygiene).

How have Afghan children been affected?

World Vision cares deeply about the needs and rights of children in Afghanistan, and we’re very concerned about their situation. Today, up to 13 million children need life-saving aid in Afghanistan, according to the United Nations (U.N.). And 36% of Afghan children suffer from stunting — being small for their age — a common and largely irreversible effect of malnutrition. Drought and displacement caused by recent conflict and the secondary effects of COVID-19 have made conditions worse.

Children have been maimed and killed, and the pandemic has heightened kids’ vulnerability to abduction, recruitment, and sexual violence, according to a 2021 U.N. report on children and armed conflict.

Without peace and humanitarian access, Afghanistan’s children are at significant risk of violence, neglect, abuse, exploitation, starvation, and worsening malnutrition. Situations like child marriage, child labor, family separation, and mass displacements — as families leave in search of food — are all likely to worsen. Already, parents in the most desperate situations are making the unimaginable decision to sell one daughter for dowry money so they can buy food for all their children.

How is the crisis impacting Afghan girls and women?

Girls’ education in Afghanistan has suffered a major setback. On March 23, 2022, the Taliban government reversed its decision to allow girls beyond sixth grade to attend school, delivering a devasting blow to the rights of girls and women. The reversal shattered hopes of secondary school-aged girls who were turned away from classrooms after the education ministry announced that schools would reopen for all students.

World Vision is deeply concerned by the reversal of the promise to allow all children to attend school. Education is a fundamental right, including for adolescent girls. World Vision calls on the international community to make girls’ access to education a key condition of their engagement in Afghanistan.

“Children in Afghanistan are crying out for the support needed for a basic childhood,” says Asuntha Charles, national director of World Vision in Afghanistan. “Children like Farida*, who was barely 7 when her father was forced to marry her off to a man who has grandchildren of a similar age to her. The family needed the dowry to pay off the debt they had been forced to take on just to survive. Farida tells us: ‘Getting a divorce is the only dream I have in my life.’ It breaks my heart that while children across the world dream of what they want to become when they’re older, there are countless children like Farida who dream of being divorced and having a childhood.”

What’s happening with the drought in Afghanistan?

Nearly 19 million people are facing high levels of food insecurity, exacerbated by drought and soaring food prices. Since October 2020, Afghanistan has been experiencing below-normal rainfall — the lowest in 40 years — that has added to the severity of the country’s drought.

In Badghis Province, one of the 34 provinces of Afghanistan, severe drought conditions led to a failure of the 2020 winter harvest and also ravaged new crops that were planted for the 2021 spring growing season. It’s estimated that 60% of the livestock have died or been sold off at minimal value to provide for livelihoods and that 40% of wells have dried up because of water scarcity.

How has COVID-19 affected people in Afghanistan?

The COVID-19 pandemic has increased the vulnerabilities of Afghan children, including by limiting their access to education, health and social services, child protection activities, and safe spaces. In a country with a population of close to 40 million, more than 11 million vaccine doses have been given as of October 16, 2022, but with the spread of variants, Afghans are still at risk. Moreover, the fallout of the pandemic — including food shortages, rising costs, and unemployment — have exacerbated food insecurity in Afghanistan and around the world.

Our donors showed remarkable generosity for Afghans in need and supported World Vision’s commitment to stay in Afghanistan and deliver critical aid to vulnerable families during the government’s transition of power in 2021. With donor support, we surpassed our goal of reaching 1 million people.

Within a six-month period, between March 23 to September 30, 2022, we served more than 1.4 million people through life-saving aid and proven programs in areas such as food and nutrition assistance, healthcare, child protection, and water, sanitation, and hygiene.

World Vision is continuing its life-saving food assistance and mobile health and nutrition projects as we’re able to gain access to areas with the greatest need. As of September 2022, we have 59 operational mobile clinics focused on feeding malnourished children and responding to urgent health concerns. About 180,230 people received primary healthcare services, including more than 64,500 children under 5 who were screened for malnutrition. To learn more about World Vision’s response, read “Afghanistan crisis: Hunger in the land.”

Where is World Vision working in Afghanistan?

We’re currently serving children and families in over 3,000 villages in the northwestern provinces of Badghis, Faryab, Ghor, and Herat. By partnering with local community leaders in Afghanistan for many years, we’ve been able to respond to crises and equip these communities to create positive sustainable change.

While we don’t currently operate in southeast Afghanistan, where the earthquake struck on June 22, 2022, we have provided relief supplies and essentials through our partners to help support 1,000 impacted families in the area.

How can I help Afghan children and their families?