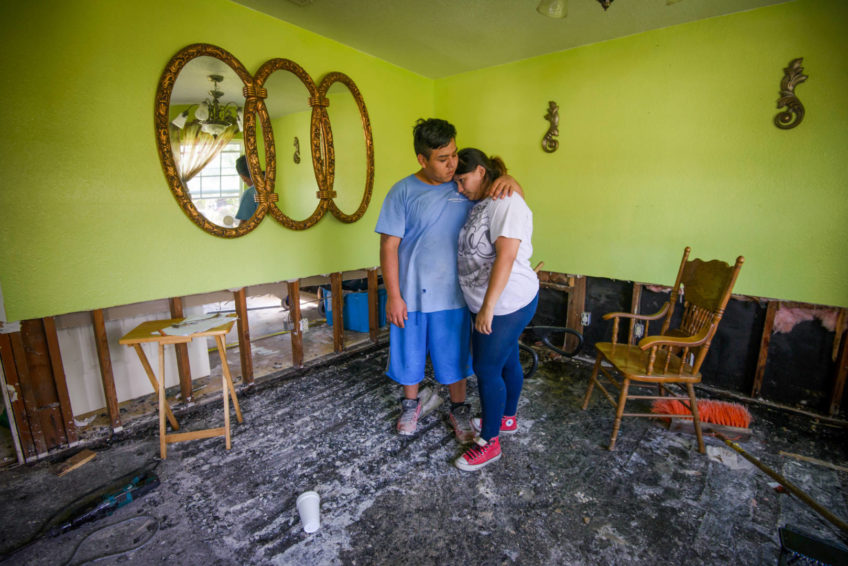 Lilly Rosales and her husband, Jose Linares, survey the damage in their living room, which was caused by floodwaters from Hurricane Harvey. (©2017 World Vision/photo by Laura Reinhardt) 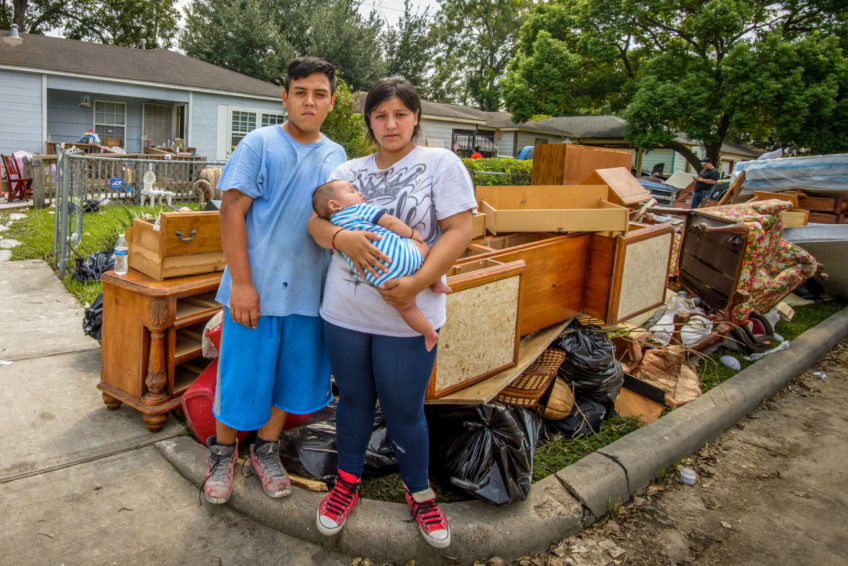 Lilly Rosales wants her 4-month-old son, Alex Xavier, to grow up in the same house where she grew up and continues to live. But for that to happen, Lilly; her husband, Jose Linares; and the rest of the family will have to rebuild after the damage caused when Hurricane Harvey flooded their home. To start, they removed all the damaged furniture and belongings out in front of the home to be thrown away. (©2017 World Vision/photo by Laura Reinhardt) 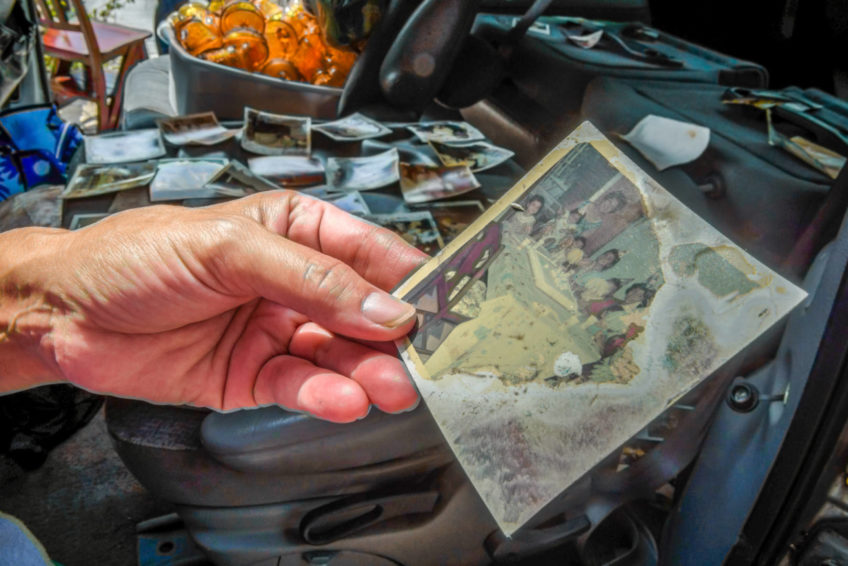 Irreplaceable family photos were damaged by Hurricane Harvey. Lilly's family salvaged what they could from the home and have laid them out to dry to hopefully preserve what they can of these family memories. (©2017 World Vision/photo by Laura Reinhardt) 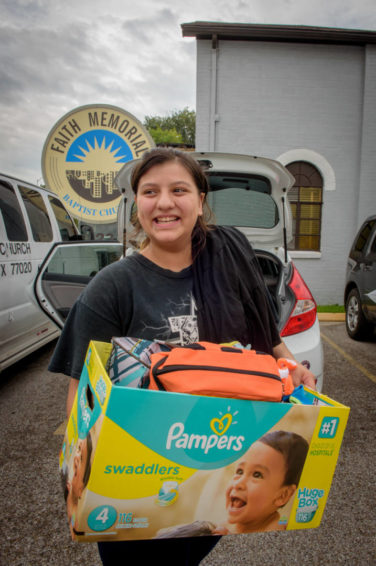 Lilly and her family received diapers, hygiene products, and other supplies at Faith Memorial Baptist Church in Houston. (©2017 World Vision/photo by Laura Reinhardt) 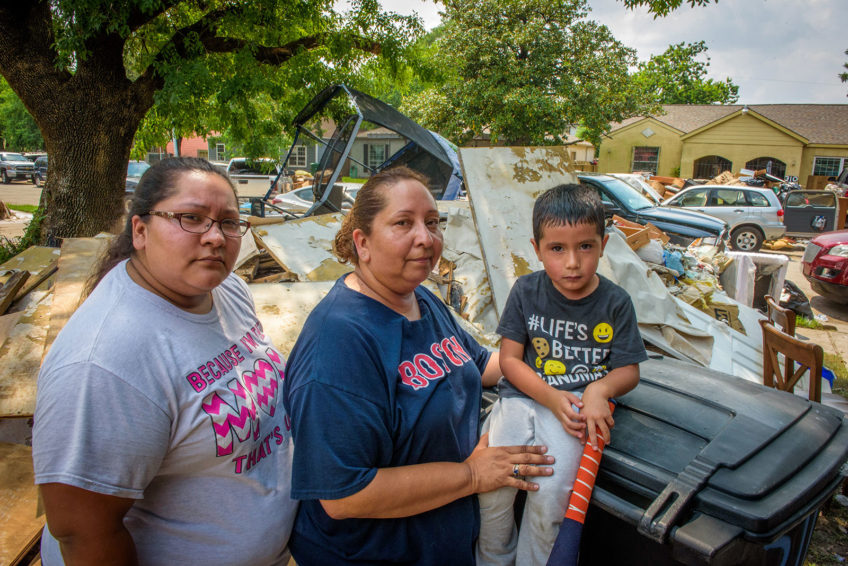 Vincent Miliel, right, and his mom, Crystal Rodriguez, left, just moved in with her mom, Linda Rodriguez, center, and her husband. Then Hurricane Harvey flooded their entire neighborhood. Now all up and down their street, houses have floodwater — destroyed debris piled high in their front yards just like that behind Vincent. (©2017 World Vision/photo by Laura Reinhardt) 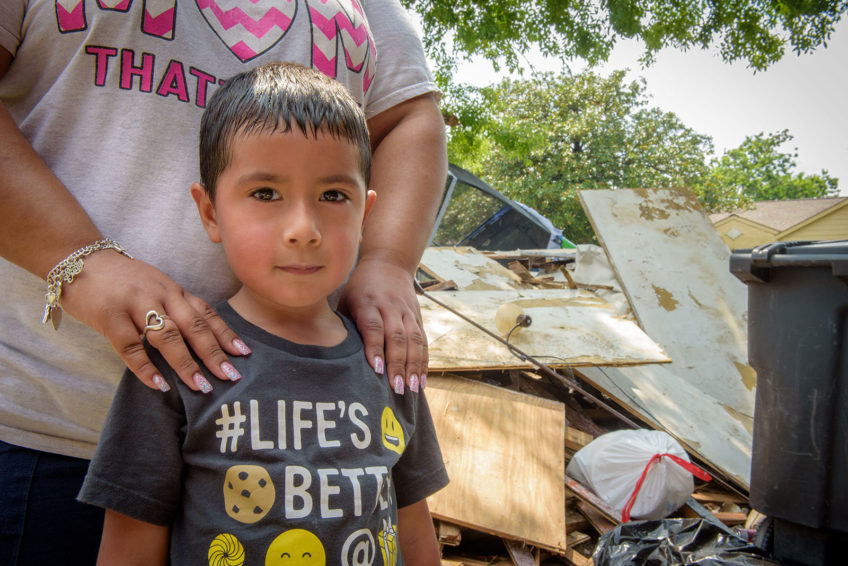 After Hurricane Harvey flooded their home, Crystal brought 5-year-old Vincent back so he could understand why they weren't staying there anymore. He asked, "Who put my toys on the floor?" when he saw his playroom with toys knocked off the shelf. (©2017 World Vision/photo by Laura Reinhardt) 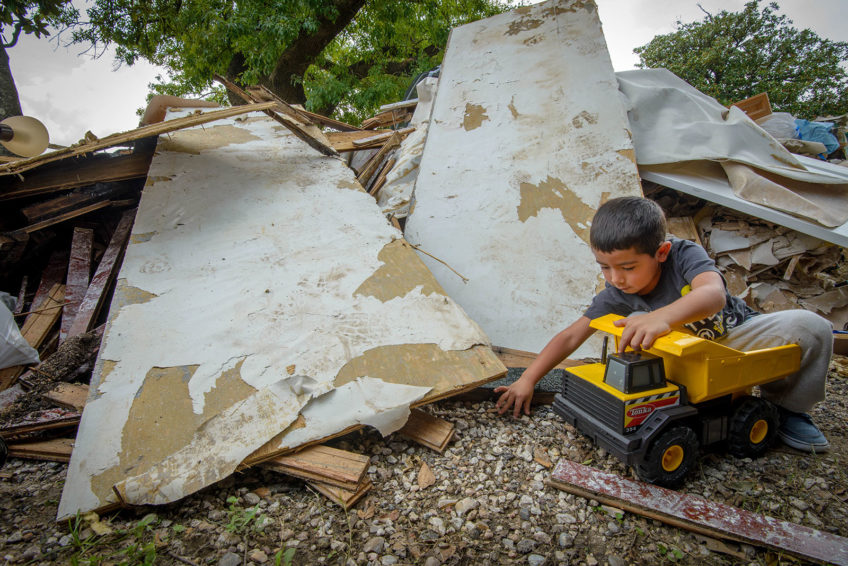 Five-year-old Vincent Miniel found one truck that wasn't destroyed by Hurricane Harvey's floodwaters. But much of the front yard is filled with debris from the house, so there's not a lot of room to play. (©2017 World Vision/photo by Laura Reinhardt) 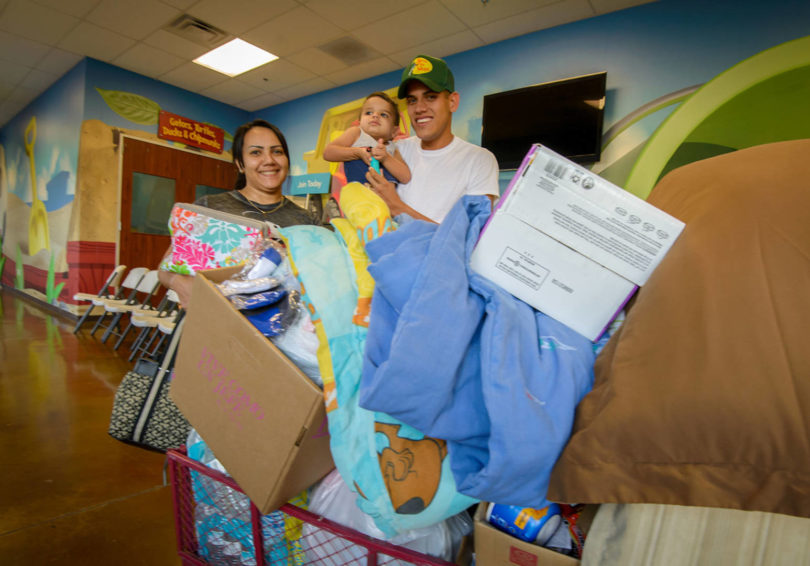 Pedro Jimenez, his wife, Nuris Laviera, and their 2-year-old son, JuanDavid, came to a distribution of relief supplies at Parkway Fellowship Church in Katy, Texas, in the aftermath of Hurricane Harvey. (©2017 World Vision/photo by Laura Reinhardt) 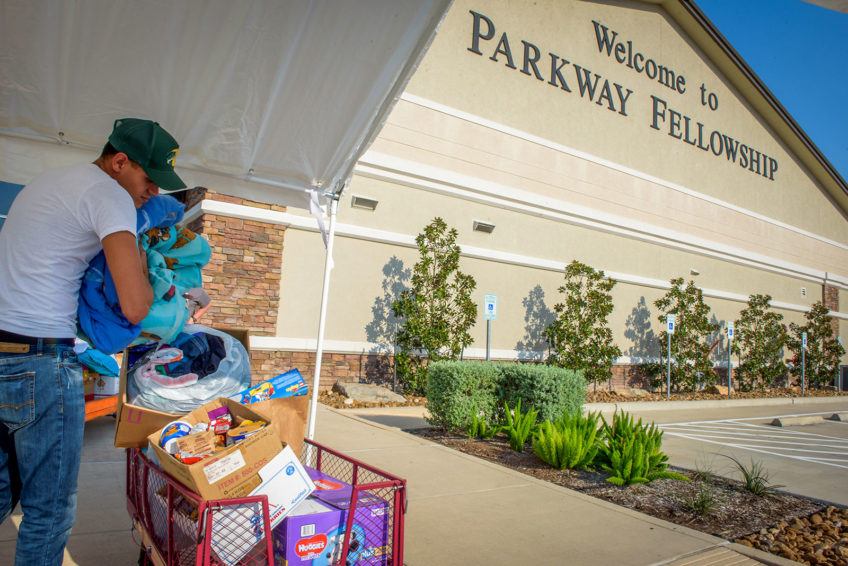 Pedro Jimenez loads relief supplies into his car at Parkway Fellowship Church in Katy, Texas. Pedro and his wife, Nuris Laviera, came because Hurricane Harvey forced them to evacuate due to the rising waters. (©2017 World Vision/photo by Laura Reinhardt) 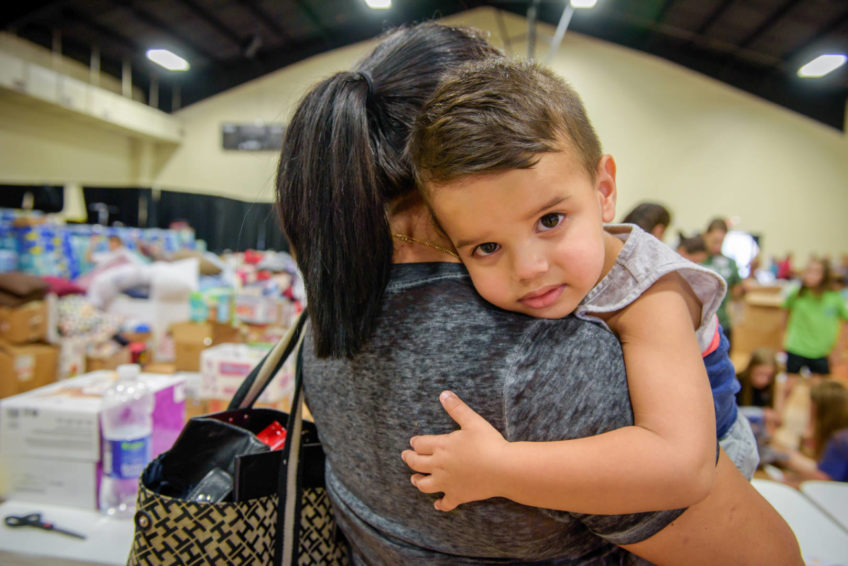 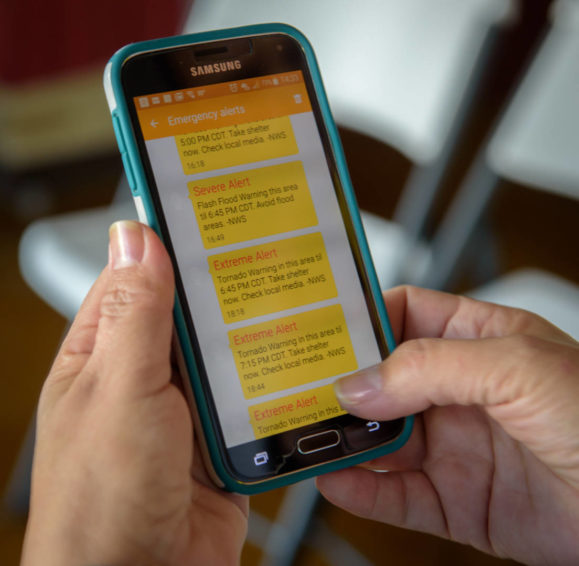 Milton and Linet Orellana recalled how their cell phones buzzed with text alerts from the National Weather Service at the height of Hurricane Harvey. The alerts came every few minutes, sometimes every few seconds, warning about flash floods and tornadoes and delivering an urgent message: “Take shelter now.” (©2017 World Vision/photo by Laura Reinhardt) 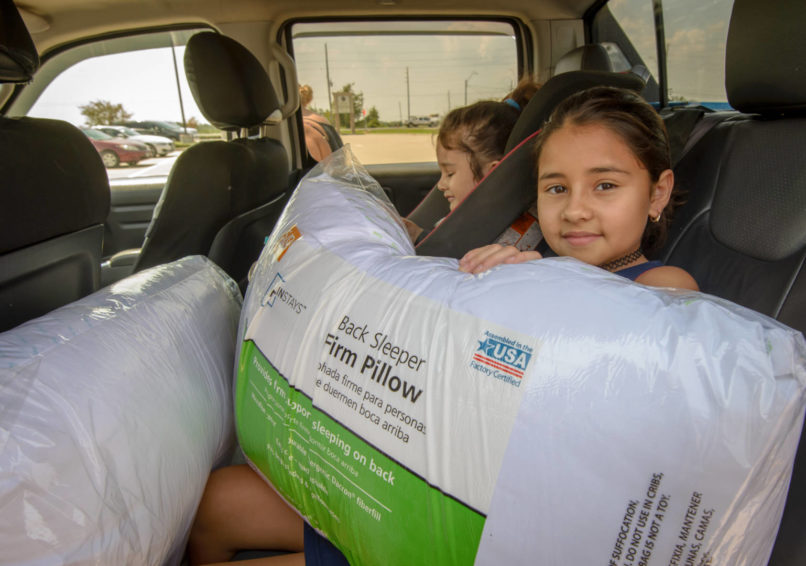 Valerie Orellana, 10, came with her family to Parkway Fellowship Church following Hurricane Harvey to pick up relief supplies. She sits in the back of the truck--filled with relief supplies--holding a pillow, which was one of the many donations World Vision was able to provide to the church. (©2017 World Vision/photo by Laura Reinhardt)

In the aftermath of Hurricane Harvey, World Vision began working with partners in the Houston area to distribute relief supplies. Families across the region came for help, and we spoke with several about their experience with the storm. Read some of their stories here, and continue to pray for them and everyone affected by the storm.

First came the pounding rain, pooling in the driveway, inching its way up the porch.

Rolled-up blankets couldn’t keep Hurricane Harvey’s floodwaters from seeping into the Houston, Texas, home of Lilly Rosales and her husband, Jose Linares, on the night of August 26. They quickly discussed what to do as water reached their ankles — then their knees.

As Lilly clutched their baby boy, Alexavier, Jose exclaimed, “We’ve got to go!”

Lilly wrapped their 3-month-old son in a blanket and placed him in a bucket. She covered it with a trash bag, leaving room for his tiny face, and grabbed the diaper bag.

Amid the early morning darkness, the family drove away in their van that stalled after only a few blocks. By this time, the water in the street was chest high. They waded to a nearby restaurant; from there, Lilly’s uncle drove them to meet up with relatives outside the flooded area.

“I was crying,” Lilly recalled later. “I was like, ‘I can’t believe this. That’s our home. I don’t have our baby’s stuff. I only have one can of formula and not even eight diapers.’

The couple is far from the final scene, but their story shows glimmers of hope in Hurricane Harvey’s aftermath. Three days after their rescue and after the waters receded, Lilly returned to her neighborhood to Faith Memorial Baptist Church, where the community had begun collecting clothing, food, and other items to help families like Lilly’s.

Lilly received packages of diapers and baby supplies, a hygiene kit, and other items. The money she saves will go toward repairing her home, she says.

For days, Lilly, Jose, and relatives returned to the house and hauled out everything, then removed buckled flooring and soaked sheet rock. The house is owned by Lilly’s great-grandmother, who also lives there and was evacuated separately.

Up and down the street, heaps of sofas, tables, mattresses, cribs, electronics, books, toys, clothing, photos — lifetimes of belongings and memories — steadily grow at the curb.

There are moments, Lilly says, where “I just want to break down and cry. I think, ‘What’s the point?’ I’ve got to do what I’ve got to do to get back up. Especially for my baby.”

Jose, too, says he struggles at times but always comes to the same conclusions: “We’re going to get through this. … This is our home.”

That home, with its yellow-green living room walls and spongy floorboards, is baking in Houston’s 90-degree heat and humidity. Jose has construction skills but is out of work, so he plans to repair the home as best he can with help from family and others.

“Everybody is offering to help others, even when they have nothing or so little,” Lilly says. “There are lot of people going to one another’s house. They say, ‘You need help? I got you.’ That’s what it takes.”

On a wall near the front door, a framed artwork depicts a border of flowers, birdhouses, and vines. In the center is one word: HOPE.

That’s the name of Lilly’s great-grandmother, but also reflects what families in Houston need during the long recovery.

On the day Vincent turned 5 years old, his home was 2 feet under water.

No one in the household — not his mom, Crystal Rodriguez, nor her parents, Rudy and Linda Rodriguez — knew that at the time. Two days before the little boy’s August 28 birthday, the family left their Houston, Texas, home for higher ground when Hurricane Harvey’s floodwaters reached the curb level.

“I thought, ‘It’ll rain today, and it’ll be over. In a couple days, we’ll be back,’” says Linda, who works as a detention officer for the sheriff’s department.

But in the hours after they left, floodwaters rapidly rose. Neighbors kept the family updated as the storm swamped homes, with water rising to chest level in the street.

The Rodriguez family, who had taken refuge at Linda’s parents’ home, could only wait it out, not knowing the fate of their home.

Several days later, the floodwaters receded enough for them to return. Beyond their soaked sofa, they found warped tables, soggy mattresses, and buckled flooring. Water pooled inside chests of drawers and kitchen cabinets. Vincent’s sandbox had floated from the backyard to the neighbor’s front yard.

The church is 1 of 20 sites in the Houston area, most of them churches, that serve as distribution points for relief supplies delivered by World Vision to help families piece their lives back together.

World Vision sent at least 19 semi-truck loads of supplies, plus one pickup load, within the first two weeks after Hurricane Harvey. More than 45,000 people are expected to benefit from the deliveries so far.

Crystal says that Vincent, a bright-eyed, energetic boy who loves to play T-ball, is too young to fully comprehend why his family can’t return home for a while.

More can be done, but “it’s going to take us coming together as one family in Jesus’ name to make it happen,” Johnson told his church on Sunday. “Though this is a disaster and a catastrophe, it’s actually an opportunity for us to be the hands and feet of Jesus — for us to show the world who it is we serve and who it is we worship.”

On the Rodriguez’s street, volunteers from churches and organizations as far away as Indiana and Maryland helped homeowners empty their homes, leaving overflowing mounds of damaged furniture, mattresses, clothes, books, stuffed animals, construction debris, and other items in front yards.

“It looks like a war zone,” says Linda, gazing up the street. Her loss includes two new bedroom sets, delivered less than a month ago, and cabinets and appliances from her “dream kitchen.”

More than 40 people — half of them friends and family, half of them volunteers they had never met before — helped the Rodriguez family lug away belongings, rip out flooring, and remove sheet rock.

Linda says she felt blessed to receive help, though she told the work crew not to throw away an “irreplaceable” closet door.

The white door had doubled as a growth chart for seven of her eight grandchildren. Over the years, they stood tall while she marked the date, their heights, and their names. Ironically and sadly, a new measure — the height of the floodwater — now also is visible on the door.

The door reminds Linda of the swift passage of time and the importance of family. Asked how she is handling a life turned upside down, she gave a weary smile.

One family evacuated by a military truck in the face of Hurricane Harvey, and they still await the fate of their home.

Pedro Jimenez, his wife Nuris Laviera, and their 2-year-old son, JuanDavid, live on the first floor of an evacuated apartment. They are staying with family temporarily in Katy, a city west of Houston, and the site of Parkway Fellowship.

Authorities told them they would be out of their home for a month. As for what they will find upon their return, “we don’t know for sure but are expecting the worst,” Nuris says. Beyond potential damage inside their apartment, “I’m thinking maybe we lost two cars,” Pedro says.

The family received a cartload of supplies at Parkway Fellowship, calling it “a big blessing,” especially since Pedro can’t work with his construction tools stuck in the apartment.

Milton and Linet Orellana’s family recall how their cell phones buzzed with text alerts from the National Weather Service at the height of Hurricane Harvey.

Although the family — including daughters Valerie, 10, and Natalie, 3 — lives in a second-floor apartment, they didn’t escape the storm’s wrath because of their damaged roof.

“It started leaking, making everything wet,” Linet says. In between alerts, they tried to protect their belongings before another tornado warning sent them scurrying into a closet or bathroom for safety.

When they later ventured outside, “everything you see is water,” Linet says. “Two blocks down, I saw cars with water up to the roof.”

Inside their apartment, another problem has emerged.

They also picked up supplies at Parkway Fellowship and said they appreciated the help because local stores were running low on inventory, and Linet is out of work as a housecleaner. Milton does maintenance for an apartment complex.