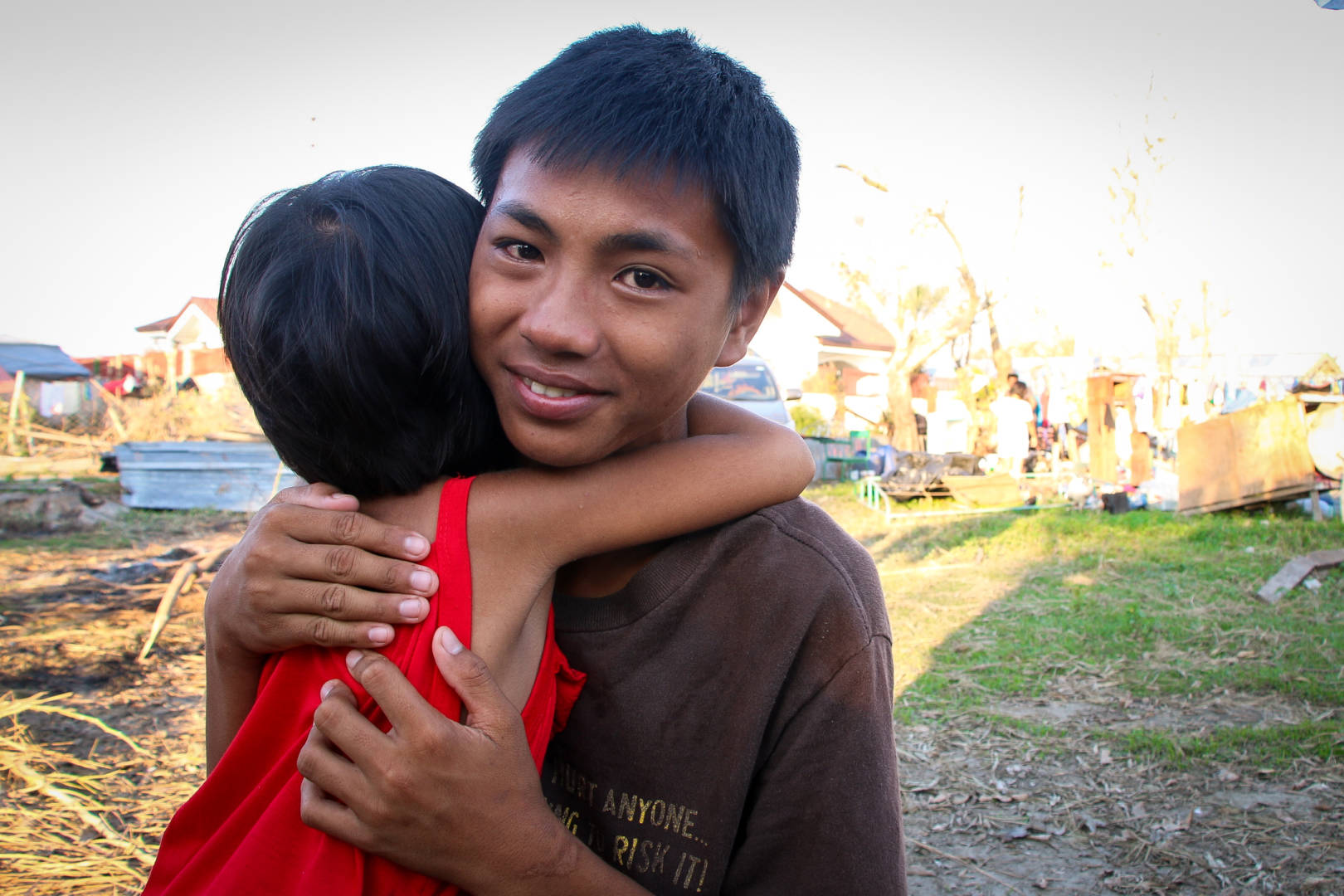 Standing near his home in the Philippines that was destroyed by Typhoon Haima in October 2016, Santiago holds his 4-year-old sister Princess. (©2016 World Vision, photo by Joy Malujo)

Editor’s note: On Oct. 20, Super Typhoon Haima blasted Cagayan province in Luzon — the northernmost island in the Philippines — with torrential rain, 140-mph winds, and wind gusts up to 195 mph. When the storm died down and the skies cleared, survivors began picking up the pieces of their lives to begin again. More than 200,000 families are affected — almost a million people, the national disaster management agency says.

World Vision communicator Joy Maluyo shares stories from a teenage boy, a farmer, and a mom that run the gamut of human emotions from fear, grief, and worry to ultimately resolve and resilience.

There’s no getting used to emergency communications work

At the end of the day, survivors’ stories keep coming back to me. They prompt me to pray, to write them the best I can, and to hope that the next time I can do more. I talked to a boy in Solana, Cagayan, [North Luzon island, the Philippines] who touched my heart. Super Typhoon Haima’s fury destroyed his family’s home.

His classes will resume today, but he won’t be there.

“I wanted to go to school, but all my clothes were soaked. All my school materials were damaged when our house collapsed,” he told me.

This boy has dreams. I saw it in the way he held his damaged books and tried to dry his notebook. I saw it when he talked about the pain of watching his siblings trying to cope with the disaster and its effects and how he cried when I asked about his hopes. When he smiled at the sight of relief supplies carried by his mother, Elena, I smiled, too.

A mentor once told me that I couldn’t just interview people and walk away. Their story has to be told. The numbers we cite need to have names and faces.

He has a name. He has a face. He is not just one of the almost 1 million people affected by Typhoon Haima. He is Santiago.

Santiago is 14 and has four siblings: E.J., Amiel, Princess, and Gerardo. He’s partial to 4-year-old Princess, his only sister. When she smiles, her eyes light up. Princess feels closest to Santiago too.

“I love him because he always takes care of me and he feeds me,” she says.

When Typhoon Haima bore down on the Philippines, Santiago’s family went to his grandparents’ house. But when the storm worsened, “My father and my grandfather had to destroy the plywood at the back of his house for us to escape,” Santiago says.

“When we checked on our house the following day, I could no longer see a trace of it,” he says. “Our things were soaked in floodwater, my books and school materials all destroyed.”

Recalling their narrow escape and their losses, Santiago breaks down and cries.

“We’ve seen the best of people’s generosity in the past days,” Santiago’s mother, Elena, tells me. “My husband’s boss took us into their home, asking nothing in return; while you, from Manila, came to give us relief goods.”

Her family was the first to receive relief items in their community.

It was a joy for me to follow them from the World Vision distribution site to the place where they are staying. Princess excitedly opened boxes while other family members gathered around to see what they had received.

Were they happy? Yes, they were. Was I happy? Oh yes.

Moments like this are a highlight of my work. While there’s no getting used to emergency communications, that’s a good thing. It will always be a mix of pain and joy, sadness and gratitude.

Jonas the farmer is alive but in debt

Another survivor I met is Jonas Pagcanlungan, a farmer. As the storm approached, Jonas took his sons to his mother’s house, then returned home to look after the family’s belongings.

“[Typhoon Haima] is the worst I’ve experienced so far,” says 40-year-old Jonas. “It was too strong. It could have blown me away if I didn’t get to safety.”

By 9 p.m., strong winds were ripping off roofs, toppling trees, and mangling houses. By 10 p.m., his roof blown off, Jonas fled. “I rushed to my mother’s house thinking only of my children,” he says.

They made it through the night safely, but the next day brought a sobering realization: All was lost.

“I was speechless when I saw my totally damaged house,” Jonas says.

Then he looked at the rice field he was expecting to harvest within a month. It was destroyed.

Jonas had counted on making more than US$300 from his share of the rice. He had carefully budgeted for debts — he owes for farm and medical expenses — and for daily needs and his two children’s education. His wife, who works as a housekeeper in Manila, a 12-hour bus ride away, doesn’t make enough to cover the family’s expenses.

Jonas’ thoughts were spinning out of control. Where will my children stay? How can I feed them? How can I pay our debts? Where is my harvest?

“All I could do was sit down and try to calm myself,” he says.

Jonas and Gian, his 7-year-old son, pick through the debris of their belongings.

“I didn’t worry much during the typhoon but when I saw our house and my books and my notebooks, all destroyed, I felt sad,” says Gian.

Jonas’s worry is tempered by gratitude that his family survived, the knowledge that there is aid to tide them over, and the determination to build back soon.

In the aftermath of Typhoon Haima, I also met Elena and her family, who had a harrowing story as well.

Elena’s family lives in a low-lying, flood-prone area by a river in a village near Tuguegarao City.

“We survived a lot of typhoons but this one is different,” says Elena.

Sheltering in a nearby shopping mall when the storm hit, she could see her house shaking. “Our roof was torn like a sheet of paper,” she says.

“I was crying the whole time, asking God to at least save my children. I thought we were all going to die,” she says.

Her daughter, 5-year-old Elaine, could sense her mother’s distress.

“Our house got destroyed, and then came the floods, and my mother started crying. Then I also cried with her,” says Elaine.

Elena’s family now lives under a tarp shelter on the side of the road with about 10 other families. Others are still in evacuation centers.

“I remind myself that this is just a trial — a difficult trial,” Elena says. “It’s hard to start again.”

Elena’s husband, a street vendor, worries about their future. “We work hard, we try our best to not ask from anybody to sustain our daily needs, but this time, we need help,” he says.

World Vision is there to fill the gaps in government aid to Typhoon Haima survivors by first providing emergency shelter assistance, hygiene kits, and kitchen sets for about 3,000 families in Cagayan and Isabela, some of the worst-affected areas.

“Thank you for those who will help us,” says Elaine. “I hope my mother won’t cry anymore.”