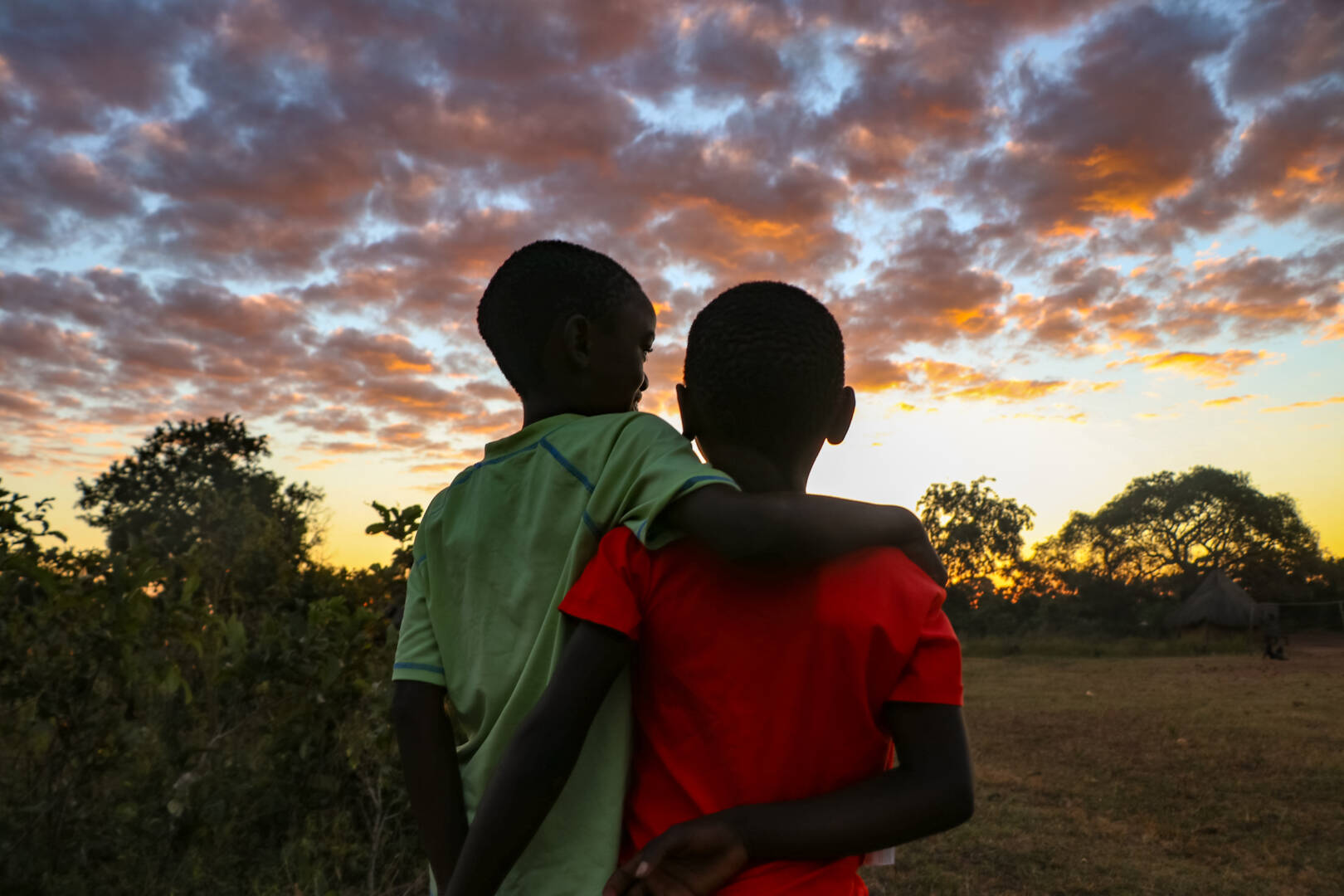 As the sun sets in Mansangano village in eastern Zambia, leaving colorful patches of orange and red hanging behind the clouds, Billy, 8, and his brother Francis, 12, happily marshal their family goats to the barn. Of particular interest to the boys are two animals — a pregnant goat named Vision, and a 3-week-old kid named King.

The boys’ parents, Peter, 43, and his wife, Dorcas, 34, watch from a distance. Their 14-year-old daughter, Otiliya, looks up from her work cleaning plates in the family’s grass-thatched kitchen to listen to the exultant bleating of goats making their way to the barn.

For this family, goats are more than animals. They are the path to a better future.

“Owning goats is like having a bank where you can go in at any time to withdraw money when you have a need,” says Dorcas.

She vividly remembers the day three years ago that the family received their first goats thanks to World Vision Gift Catalog donors. “I can never forget August 11 because that’s the day our lives changed,” Dorcas says with a proud smile.

Along with the goats, Dorcas and Peter received training on how to care for them. Once the animals began to multiply, they worked with World Vision to share the blessing by gifting some of their goats to another family in the community. It felt like a dream come true.

“For a long time, we wanted to do goat farming because we saw how [goats] were helping others, but we had no means to buy them,” says Dorcas. The children were equally excited for the goats, and they wanted to name them immediately.

“We told them to wait, and that once [the goats] started giving birth and we did a pass-on, then we would name the goats that remained because those would be ours to keep,” Dorcas says.

In April the following year, the goats gave birth — and the family tradition of naming goats began.

“I named my goats Malyamiko (“thank you”), Passo (“gift”), Chinyebekezo (“we were waiting”), and King,” Francis says. Billy jumps in, “My goats are named Vision, Takondwa (“we are happy”), Benefit, and the new baby is [also] called King.”

Asked why he chose the name King, Billy says it’s because “he was born big and strong.”

“That is called Benefit,” Francis says, pointing at a brown male goat. With excitement, Billy also points to a white and brown spotted goat in the corner of the barn. “That one is called Agreement,” he says. It’s evident through the names how significant the goats are for the family. But to fully appreciate them, it’s important to know the full story.

Season of little or nothing

Every parent’s wish is to see their children healthy and well taken care of, but for Dorcas and Peter, making that wish a reality had been challenging for the longest time.

A drought from 2018 to 2019 made things worse. Dorcas and Peter’s family lives in the Nyimba district, a predominantly farming area that relies on rainfed agriculture. Crops include groundnuts, sunflowers, and maize — a staple food for many.

“We had high hopes for a good harvest, but the rains stopped, and our hopes died with the crops,”

Peter says. “Most of our maize only reached knee-level. The rest we managed to harvest was not enough to last us to the following season.”

That year they ended up with only 65 bags of maize, instead of the 180 bags they were expecting. Peter is a resourceful man who desperately wanted to support his family. “I had challenges sleeping. … We had nothing at home,” he says. “I would frequent town areas to look for any kind of work so I could buy food for my children.”

But for most of 2018, the family struggled with hunger and debt.

“Life was hard, and the future was uncertain because we often lacked the money to buy food and pay school fees for all the children at the same time,” Dorcas says. She and Peter decided to sell 30 of their 65 bags to have some money, and ration the rest so the family could survive. “We sometimes only had one meal in a day,” Dorcas says. “The children would constantly cry, and it made me really sad as their mother.”

Some days Dorcas would go without her own meals so the children would have more to eat. Billy, the youngest, says his stomach often hurt from being so hungry: “It was hard to play when I was hungry because I felt weak.

Dorcas’s memories of those troubling days are painful. “Billy … would come crying to me asking for food,” she says. “It was moments like those that broke my heart because there was nothing I could do but tell him to wait.”

Then there was Otiliya, who sometimes couldn’t attend school because it was nearly 2.5 miles away — too far to walk on an empty stomach.

That year, Francis was withdrawn from school because Peter and Dorcas couldn’t pay his school fees. Missing out on school made him sad.

“I used to feel bad whenever I was told to go home by my teachers because my parents had not paid school fees,” Francis says. “Whenever I asked my parents, they would tell me they would pay soon.”

With the distribution of goats funded by donors to the World Vision Gift Catalog, farmers like Peter and Dorcas began experiencing life-changing transformation.

Speaking to donors, Peter says, “You … have no idea the kind of impact you have had in our lives and this community through the goats you have given us.”

The arrival of the goats helped his family recover from the devastating impact of the drought.

“It brought me great joy when we received these goats. I used to admire from afar until the day we received them also,” Peter says. “I have seen that goat rearing is more profitable than crop farming because it’s cheap, and it does not require huge capital for expansion. My dream is to raise as many goats as possible.”

The training offered by World Vision in goat rearing and financial literacy over the last three years has been transformative for the whole village. “If you go to all the 30 households who received goats [in 2018] in Masangano village, every one of them has passed on the blessing to other [local families],” says Nathan Phiri, a livestock expert for World Vision in the Nyimba area program.

“As we do community follow-ups, the families are all telling us the same thing: The goats have helped them to recover from the aftershocks of the drought, and … they are also helping them pay for school fees for their children and buy basic farming inputs,” he adds.

This year, Peter and Dorcas had the resources to farm more of their land and harvested 250 bags of maize — a record for them.

The family spends a lot of money buying supplies, so the goats help save them some costs as well by providing fertilizer.

“This is where the goats come in handy,” Peter says. “The goat manure also helped to raise our yield, and as a farmer, I couldn’t be happier.”

After the first five new goats that they passed on to another family, Peter and his wife have raised 20 more, and the goats have made an entirely new enterprise possible. “We sold five goats last year, and the money we got enabled us to start a business of selling weed killers,” Dorcas says. “The remainder of that money was [used] to buy fertilizer for the field to complement the goat manure.”

Dorcas’s sons are the best of friends, and they enjoy caring for the goats together. The boys share a common love for something else: school.

When the family was still struggling and Francis had to drop out, a local reading camp started by World Vision helped him continue learning until his parents could scrape together school fees for him the following term. The reading camp has proved to be popular among children. Kids who can’t attend school go to the reading camp every weekend because it’s centrally located and doesn’t charge fees.

Billy also attends the reading camp. “I enjoy going to the reading camp with my brother Francis. It is very nice, especially when it comes to reading storybooks,” Billy says.

The boys now attend the reading camp for fun instead of out of necessity. Because the family has more steady income because of the goats, Peter and Dorcas can afford to pay their children’s school fees.

“We will make sure that the children continue their education, and those goats that we own will pay their way through college,” Peter says. “Because goat farming is different from crop farming, the returns are also guaranteed.”

Students from Mansangano village walk up to 3 miles to the nearest school — a challenging distance, especially for younger children like Billy. This problem has brought parents like Peter together beneath a grove of trees on a sunny afternoon to discuss the construction of a community school, an idea birthed from the World Vision reading camp. The village leader, Kennedy Lungu, chairs the meeting. The goats have equipped community members with the funds to invest in better education opportunities for their children.

“Currently, the community is mobilizing resources so that we can begin construction,” Kennedy says. “So [with] whatever contribution the community give[s], we will start building.”

School kids aren’t the only ones benefiting from the changes brought by the goats. In the Nyimba district, World Vision is training people in business and financial skills through savings groups.

Savings group members create their own guidelines for their specific group, including how much each member will regularly contribute. For lower-income people who are denied access to formal banking services, savings groups offer a way to both save money and take out affordable loans to help with business and family expenses. At the end of the member-agreed time period, the group “shares out” among the members all the savings from their contributions and the interest received from loan payments.

“I am a member of a savings group, and this group offers me a chance to borrow and invest based on the needs the family is facing,” Dorcas says. “Savings groups are helping our family.”

“The group is nice because it’s just young people who attend it,” Otiliya says. “Whenever my parents give me some money, I take it to the group. Things I bought are just a testimony to how nice it is to save.”

Peter and Dorcas are thrilled to help their children gain financial skills while they are still young, something neither of them had an opportunity to experience. The lessons the couple has learned through these financial programs are what they credit for helping them get where they are today.

“After receiving the goats in 2018 and before the pass-on, we faced many temptations to sell the goats so we could meet the challenges we faced,” Peter says. “But we remained steadfast because of the knowledge we received through the training from World Vision.”

The simple gift of five goats from World Vision has brought peace of mind to Peter and Dorcas and secured a future for their children. Now the family can dream, the children can play and study, and everyone is healthy. It’s such a difference from how life was — one that they don’t take for granted. And as their family of goats continues to grow, the children will relish naming them as they continue to celebrate the blessings.

“My wife and I are grateful to World Vision,” Peter says. “Our lives have changed for good.”

From the World Vision U.S. president: The story I’ll tell