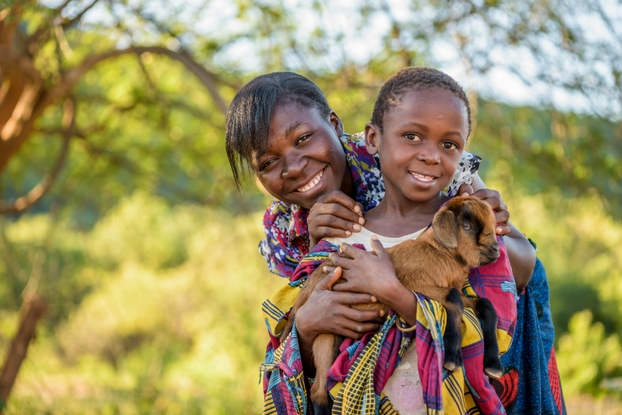 Newly married, Saviour Dene had a big problem. Her new husband would not accept her daughter from a previous relationship as his child.

He told Saviour that he’d married her, but not her daughter.

Saviour did not know what to do so she talked to World Vision community development worker, Seth Siamugande.

“If I had power, I would swallow my daughter so she is no longer there,” Saviour told Seth. “It’s a big burden.”

Seth knew exactly what to do. He took the little girl, Modester, under his wing. That was 2007. Today Modester is 18 and still Seth’s favorite.

“She is one of the children that I have on my heart,” he says. “That child has gone through tough moments.”

I am their mother

Modester considers herself a single orphan — meaning she has one living parent —though Seth says she rarely sees her mother anymore. Now Modester lives with her 80-year-old grandmother, Noria.

In addition to being rejected by her family, Modester faced hunger. Sometimes she ate only one meal a day. She envied neighbors who had three meals. Sometimes when they had nothing, Modester would go into the bush to find wild okra, which fills up empty bellies, but doesn’t offer much nutritional value.

Grandmother Noria is raising Modester’s cousin, Evelyn, along with two mentally and physically disabled grandchildren—Sydney and Junior. It’s too much for such an elderly woman so Modester has assumed a lot of the parenting responsibilities for her younger cousins. A girl who grew up practically motherless now has three charges of her own.

“I am their mother,” she says, now that Noria has left to care for a sick relative leaving the younger children in Modester’s care.

“She helps us with the preparation of our food. Also, she draws water for us,” says 9-year-old Evelyn. Modester spends time helping Evelyn with her homework.

Modester says, “I encourage her to go to school and study. Sometimes I get a piece of paper and we do a bit of solving mathematics.”

Evelyn wants to be a teacher. She looks up to her cousin. She appreciates the hard work the teen does for herself and her cousins, but she also admires Modester’s education.

It’s an education made possible partially by the gift of a goat.

Goats: A gift that lasts

What a difference a single goat makes. It’s offered her a path forward toward higher education. “Without the goats, I might have been married,” she says.

In the Sinazongwe Area Development Program, World Vision offered a gift of a goat to orphans or especially vulnerable children. Modester qualified and when she was in the second grade, she received that gift.  It didn’t take long for that single goat to reproduce. Her herd expanded to 12 goats.

As the goats multiplied, so did Modester’s hopes.

“Goats gave me hope because I started to dream of who I wanted to be and I have seen that dream come to pass,” says Modester. Her dreams include being a nurse because she likes helping others.

Modester sold a few goats at a time, always being careful to keep a couple of the animals in reserve for emergencies. Some went to pay people to work in their fields so the family had enough food to eat. Some went toward clothing for the children in the family. Some paid for her educational needs.

Goats are part of the equation and child sponsorship is another. Modester appreciates how supportive the staff has been, especially Seth. They’ve provided for both the family’s physical needs as well as her education. Seth is always there with advice about things like school and boys and sometimes even a little pocket money,

“World Vision staff kept encouraging me to work hard in school and to remain focused,” she says.

And focus she did. Modester just completed university-level exams. The results were astounding. Modester, a girl whose family threw her away, is one of the top students in all of Zambia. That’s very unusual for a youth from a small, rural community.

The staff also nurtures the spiritual growth of all the children in the project. Seth started a Good News Club and Bible study for the sponsored children when he came to Sinazongwe. Through Seth, Modester learned more about God’s love for her and her faith grew.

She now has a father who will never abandon her.

She always goes to God with her needs. She knows that He answers prayers because: “Whenever I prayed asking God for something, it happened and among those whom God used to respond to my needs is World Vision and the staff.”

Her faith and prayers are being put to the test as she prepares to attend a university. These school costs are too great even with the assistance of the goats.  So she hopes for either a scholarship or someone to help pay for the university fees.

A university degree will bring her closer to her dream — one that goes beyond becoming a nurse.

“I think when I have enough money I [will] think of helping orphans,” says Modester. “That’s important because I’ve felt what being an orphan is. It’s very hard.”

But things that are difficult won’t stop this determined young lady — not with Seth, a herd of goats, and the love of a faithful Father leading her on.

She can do anything; she only need a believer.

She can do anything; she only need a believer. 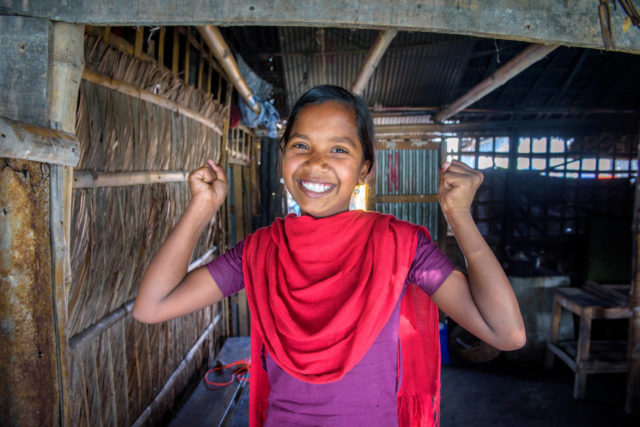