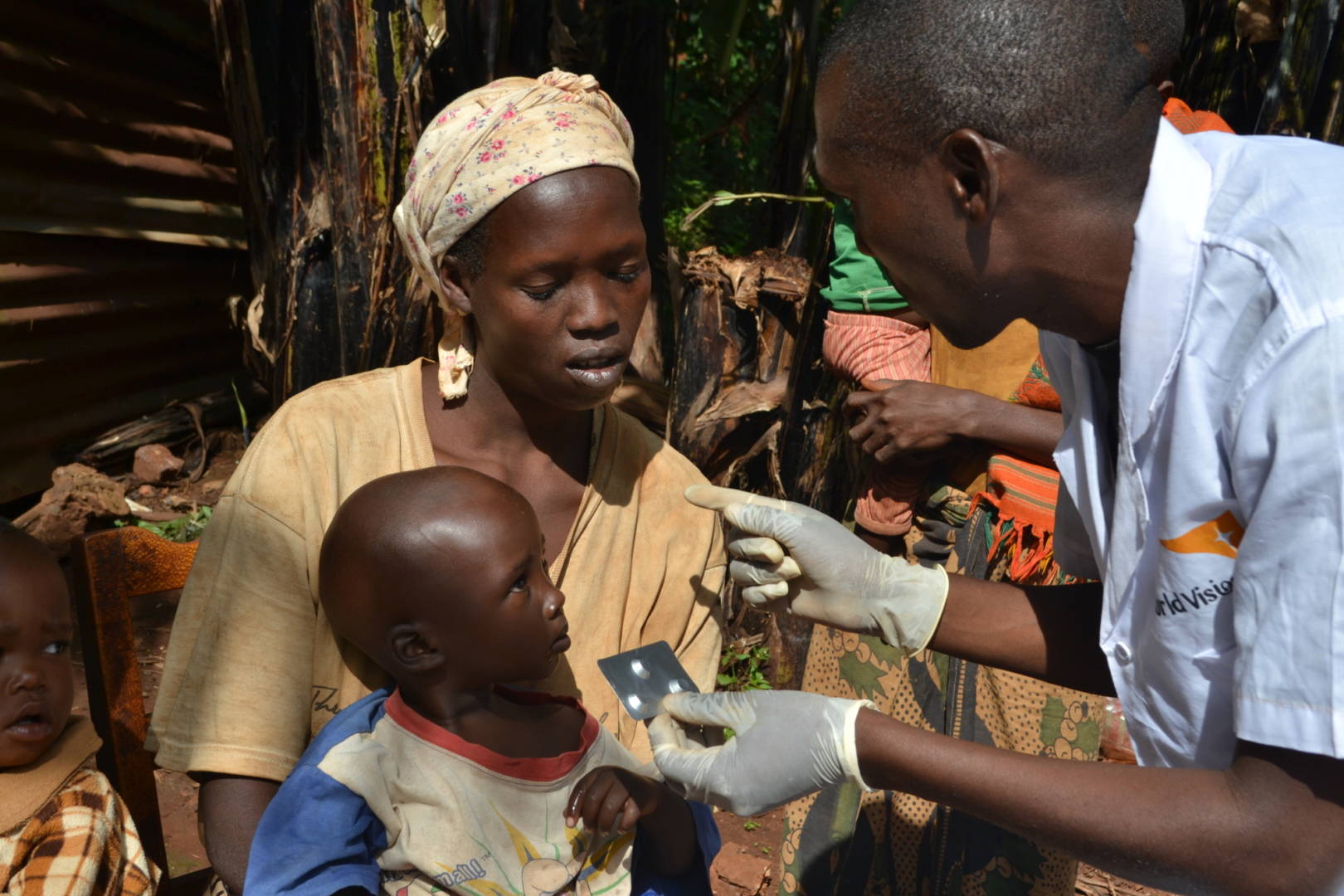 At his home in northeast Burundi, community health worker Diomede diagnoses and treats common ailments of children under age 5. Malaria is among the three most deadly diseases for children. (©2016 World Vision/photo byJavan Niyakire)

Consolatte watched malaria stalk her village in Burundi, and one night she feared it had come to her home.

She knew that recently many mothers in her community, Gitaramuka Commune, lost their children to malaria. And she spent a long night holding her son, Divin, feeling heat course through his small body.

The next morning, she was one of three mothers waiting with small children in their laps outside Diomede Ndayisenga’s home.

A volunteer community health worker in Gitaramuka Commune, Diomede serves on the front lines of Burundi’s battle with malaria.

Seated at a table beneath a tree, he wears his nursing uniform. White gloves on his hands, clean needles at the ready, he diagnoses and treats malaria, pneumonia, and diarrhea at his home in northeast Burundi’s Karusi province. Diomede did not go to nursing school but was trained and equipped by World Vision.

It only takes Diomede 15 minutes to tell her what’s making Divin hot and listless: It’s malaria.

With the first dose of medicine, Consolatte’s worries aren’t over, but she’s relieved that her child is being cared for.

“I am happy my child is diagnosed and treated close to home,” she says.

A malaria outbreak has affected more than 5 million people out of Burundi’s 10 million population since January 2016. This year’s numbers are twice what they were in the same period of 2015.

At least 920,000 of the cases are children under age 5, like Divin. In the area where Divin lives, over a million cases of malaria have been reported, and 500 of them were fatal. Nationwide, more than 2,400 people have died from the disease, including 16 children supported by World Vision programs.

Diomede, the volunteer health worker, and 520 more like him in Kansu province, are working to turn the tide of rampant malaria infections in Burundi.

In the first six months of 2016, they treated more than 90,000 children. By delivering healthcare at the community level, they relieve a burden on families and public health centers that are swamped with patients.

“After treating a child, I follow up with home visits within 48 hours,” says Diomede. “If the situation worsens, the child is referred to a health center.”

Obstacles to saving children from malaria

As he cares for children and earns their mothers’ trust, Diomede looks back at how far his community has come in addressing health concerns.

“Some years ago, people here visited traditional healers, which led to more deaths that could have been avoided,” he says.

Though the community has started seeking different forms of treatment, Diomede faces obstacles.

Recurrent shortages of drugs and medical supplies make treating patients difficult. “I sometimes spend weeks with an empty store, and this affects my patients,” Diomede says.

Young children are more likely than adults to suffer severe effects from malaria, including seizures, coma, and death. Out of the 438,000 deaths attributed to malaria in 2015, 69% of those who lost their lives were children under age 5, according to the World Health Organization.

Help prevent malaria and protect children from this horrible disease.