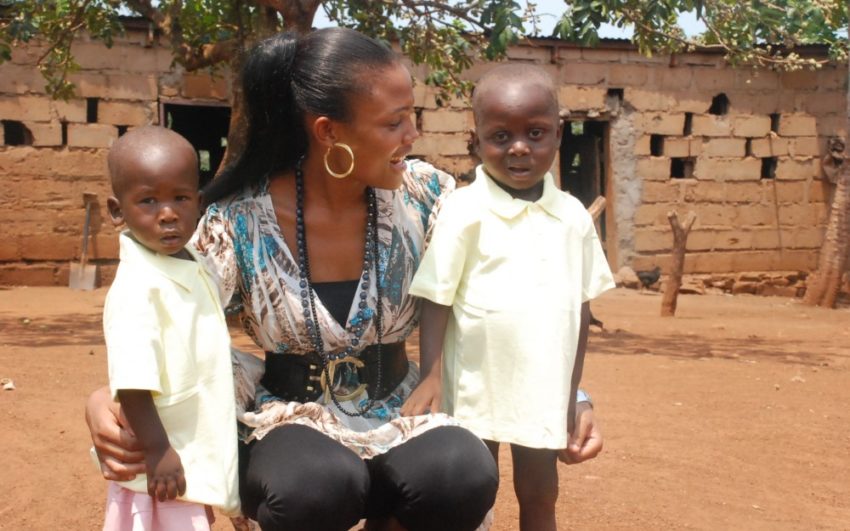 Nozipho with her nieces who are wearing new shirts donated to the family by World Vision. (©2011 World Vision/photo by Zanele Faith Dlamini)

Meet Nozipho Mahlalela — a graduate of the University of Eswatini (Swaziland) with ambitions to start her own business. It’s hard to believe the miserable circumstances into which this bright young woman was born.

Nozipho, 23, grew up in Nkalashane, Eswatini — an area in southern Africa that at the time was devastated by regular droughts, poor harvests, and AIDS. Children there frequently suffered from malnutrition. Transport to and from Nkalashane was so poor that Nozipho’s mother, Mariah, received no medical attention while giving birth to Nozipho.

To make matters worse, the day Nozipho was born, her father turned his back on his family, leaving Mariah to care for Nozipho and her five older brothers and sisters.

Nozipho’s life would not be defined by her circumstances, however, as the seeds of transformation began with a loving mother. Instead of seeing the arrival of her youngest child as a burden, she saw her as a blessing, a fact reflected in her choice of the name Nozipho, which means “gift.”

Mariah devoted herself to raising her children as best she could — making a little money by growing cotton. Even so, Nozipho often went days without eating during tough years. One of those years was 1992, when another failed harvest prompted World Vision to undertake emergency food distributions in Nkalashane.

Also that year, World Vision began a development program funded by child sponsors, and Nozipho was among those who became sponsored. The privilege was another step along the road to a changed life.

When Nozipho discovered there was someone else in her life who cared about her, she was deeply touched. “[My sponsor] used to write me letters and send me Christmas cards every year,” she says, “and that made me feel special.”

Sponsorship also brought practical benefits. Mariah recalls donations of food, clothes, shoes, goats, and fruit trees. Mariah adds that one of the early sponsorship projects was helping residents mix cement to make tanks that would capture water and make the best use of limited rainfall.

Energized by the transformation that the tanks could bring, Mariah constructed several for her own family and assisted neighbors in constructing theirs. Her enthusiasm got noticed. When World Vision began a sanitation project that would allow everyone to have access to a toilet, Mariah was chosen as the project manager.

But perhaps the best practical gift was helping Nozipho complete her education. When Nozipho reached high school, the fees were beyond her mother’s means. But recognizing that Nozipho was a first-rate student, World Vision supplied the necessary funds for her to graduate.

It was a good investment. The government awarded Nozipho a scholarship to study for a diploma in journalism and mass communications at the University of Eswatini. “The main reason I was attracted to my course is because I like being creative and [communicating] new ideas,” Nozipho says.

She says receiving the scholarship was like living a dream. She believes she is the first person from her community to attend university.

After graduation, Nozipho began working as a marketing officer for a construction company. Her ambition is to run her own business, and she believes she has identified a promising market. She says many firms in Eswatini lack adequate security. Her idea is to train security officers and outsource them to large companies.

Nozipho says she is intensely grateful to her sponsor, not only for her own personal development but also because the improvement in her finances has allowed her to look after her aging mother — the woman who cared for Nozipho so faithfully during her formative years, despite terrible hardships.

One of the first things Nozipho did when she started earning an income was pay for electricity to be installed in her mother’s home. Later, she paid for a 10,000-liter water tank to supplement the smaller tanks her mother had installed with the help of World Vision. Currently, she is assisting her mother in caring for six of her nieces and nephews following the death of two of Nozipho’s siblings.

Through such means, Nozipho continues to demonstrate her love and devotion to her mother and the rest of her family. And her future is made bright by the blessings in her life.

Zanele Faith Dlamini of World Vision’s staff in Eswatini contributed to this article.