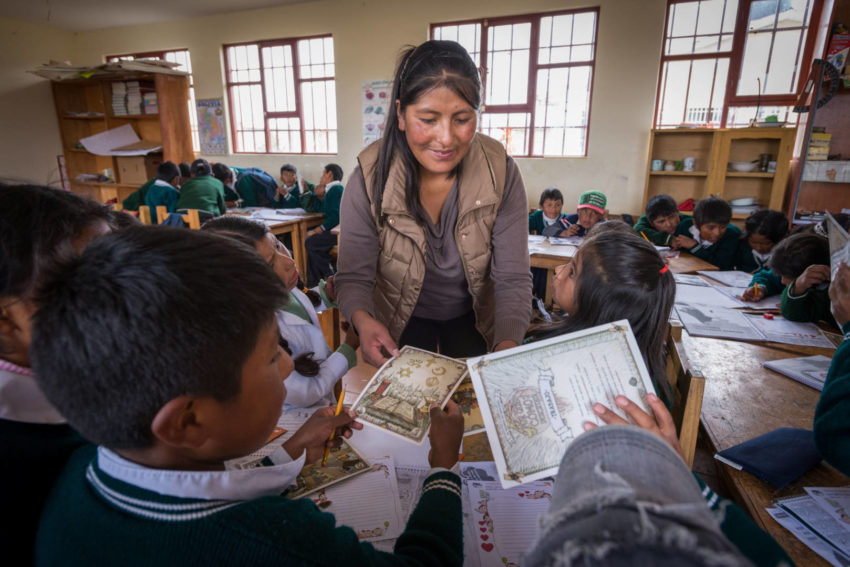 Felisa Ramos Valencia, 28, a former sponsored child in Bolivia, leads sponsored children in a storyteller workshop. The writing exercise encourages children to talk about their own experiences when writing letters to their sponsors. (©2015 World Vision/photo by Eugene Lee)

When Felisa Ramos Valencia, 28, was growing up near Soracachi, Bolivia, her dream of going to college led her to defy traditional expectations for girls in her community and change her own parents’ outlook on education.

“For a woman to study in this time, it was basically something that was unheard of. And there was a myth that women could go to school only until fifth grade, and that was it,” says Felisa, a former sponsored child who is now a lawyer. Even now, just 76% of high school-age girls in Bolivia are enrolled in school.

“I am the first girl to have ever graduated as a high school student in my school, in my community,” she says.

As a sponsored child, Felisa received school supplies and encouragement to pursue her education. Through sponsorship-funded programs, World Vision staff taught her how to talk to her parents about her aspirations.

“After the training that I received, I had the capacity to convince my parents that I was able to continue studying,” she says.

Just getting an education wasn’t enough; she wanted to become a community leader. While in high school, Felisa volunteered as a World Vision health promoter, teaching people in her community better health and sanitation practices. And while attending university, she organized local women to be a voice in their municipality.

With her parents’ support and new perspective on the importance of education, Felisa earned an undergraduate law degree — then took a job with World Vision back in Soracachi, bringing her sponsorship story full circle to the organization that helped her follow her dream. Since 2012, she’s put her degree to work as facilitator of the Project Against Trafficking of Children and Adolescents — a program that lobbies all levels of government for children’s rights and raises awareness against trafficking.

“Now [my parents] are proud that I am a professional,” she says.

On a recent day in Soracachi, Felisa led a workshop teaching sponsored children practical steps to guard against trafficking. The children learned that if a stranger approaches them, they should say “no,” run and find help, tell someone they trust, and report the person to a city official.

In addition to the trafficking prevention tips, she also encouraged the children to write stories about their lives to their U.S. sponsors.

“We thank God for having World Vision here in this community, because it’s a blessing. As a child that has been sponsored in the past, I feel very, very proud of having been one,” Felisa says. “I have come to World Vision to give back what I have received. I constantly tell my students that they have to, like I did, have a dream and never let go of that dream.”

Help a child like Felisa pursue his or her dreams by sponsoring today.