In 2006, Nelson Chizala lay groaning inside his home. His swollen face covered in blisters. People passing by the house could hear his cries. Perhaps he thought about his granddaughter, Tassy, who he and his wife, Jerecy, had been raising since she was a baby. If he died, how would Jerecy and Tassy care for themselves?

Conditions in rural Zambia can be especially harsh for widows and their children. If Nelson died, then even what little he could provide, would be gone.

One of Nelson’s brothers took him to the hospital in Choma, about a 3-hour bus ride from the family’s home in Moyo, Zambia, but for a family needing every single kwacha (Zambian currency) they had, the cost of transportation overwhelmed their already meager resources.

At the hospital, Nelson received unwelcome news. He was HIV positive.

“The first thing that came to my mind was death,” Nelson remembers. “At that time a lot of people were dying of the disease. I became very scared because my two elder brothers had passed on from the disease.”

Thankfully for Nelson, in August 2005, the Zambian government had announced that antiretroviral drugs would be provided free of charge to everyone who tested positive for HIV.

Nelson, now 67, urged Jerecy to be tested too even though she showed no symptoms. She discovered she was also HIV positive. So they both began their bi-weekly journeys to the town where they could receive treatment. Initially, they went all the way to Choma, but then had their cases transferred to a slightly closer city, Pemba.

Jerecy, 52, says, “Myself and my husband would carry [Tassy] on our backs.” They walked to the closest town, where Jerecy would go to her uncles’ homes to beg for bus money for the trip. “The thing that sucked us so much was the transportation,” she says.

The transportation cost took food from Tassy’s mouth. “I really had to take a lot of worrying as to how we were going to find money,” says Jerecy.

A family in poverty struggles
for even the basics

A family in poverty
struggles for
even the basics

The family usually ate just one meal a day. They saved it for the evening, eating nothing in the morning or at midday.

There were times when Tassy came to Jerecy and said, “I need some food. I am hungry.” But they had nothing to feed her. When this happened Jerecy would go to the neighbor and ask for a bit of porridge to feed her granddaughter.

Jerecy says, “My heart was always troubled because I would be wondering, what can I do to change this situation?”

“They used to ask for help from others. They might get to borrow equipment for just one day, but that wasn’t enough to completely clean the field,” she says. “They were only able to grow about three to four kilograms of crops. That wasn’t even enough to feed the family.”

Clothing was also a problem. The little money they had went to food and their transportation to the clinic. Tassy often went for days wearing the same clothes. The family couldn’t afford to buy soap, so Jerecy couldn’t even clean their clothes. She tried without success to wash with just water, but that didn’t help.

“I used to feel ashamed seeing my granddaughter that she’s wearing dirty clothes. I could not even afford to buy soap to wash her clothes so they could look clean,” continues Jerecy.

Another thing that kept them in poverty was their lack of animals. People in Moyo are part of the Tonga tribe and animals determine wealth. “If you don’t have an animal, it’s as if you are not a human being,” says Princess Moyo.

But things began to change when World Vision came to their community in 2010. Princess Moyo went to work for the organization as a community development worker. She and other World Vision staff identified some of the most vulnerable families — including Nelson’s and Jerecy’s family.

Princess Moyo says, “World Vision came and educated them and encouraged them that even though they were HIV positive, it wasn’t the end of their life.”

Through a support group, Nelson received five buckets of vegetable seeds that included tomatoes, mustard, and cabbage. These provided enough for a very big garden so at last the family had enough food to feed themselves, plus extra that they were able to sell.

They earned 800 kwacha (about $78 USD) for that harvest — a lot of money for a family in rural Zambia.

Then a year later, in 2011, came the extra special and life-changing gift of five goats from World Vision’s Gift Catalog.

“That was the starting point of the family,” says Princess Moyo. “Without the goats, it was going to be very, very bad.”

Jerecy says, “The day the goats were coming was the greatest day for me. It was the day of the greatest joy I have ever had. I knew that was the beginning of a change, turning the story upside down.”

Tassy simply says, “Goats are the ones who helped us to find food.”

It didn’t take long for the goats to multiply. Nelson traveled to Lusaka, the capital city, to trade some goats for two cows that help when it comes time to plow the family’s fields.  They’re expecting a huge harvest this year.

A girl in Zambia is
now able to dream

A girl in Zambia is
now able to dream

With her basic needs now met, Tassy can dream of her future. She wants to be a nurse. She went to a clinic once with stomach pains and saw the relief the nurse offered her.

That made a lasting impression. Tassy also likes helping people.

“I want to help people because some of them are actually orphans,” she says.

By selling goats, Jerecy and Nelson can pay for Tassy’s school fees, school supplies, and even new clothes for her to wear. The goats offer a renewable source of income, since they multiply fairly rapidly.

Nelson sees the goats as changing not only Tassy’s life, but also the lives of any children of her own she might have when she grows up. He says without the goats: “I don’t think we would be talking about the future she is going to have.”

Education is extremely important to both Jerecy and Nelson. In fact, they took Tassy in so that her mother could finish her own education. Now Tassy’s mother works in another city so she sees Tassy infrequently. Tassy call Jerecy and Nelson, ‘mom’ and ‘dad.’

Nine-year-old Tassy ranks number two in her fourth-grade class. She’s smart and Nelson encourages her to dream of being a doctor. She smiles shyly at her grandfather’s words before agreeing she also thinks she could be a doctor.

She wants to work in Lusaka, but then would like to return to Moyo. “I would come back to help this community because this is my home village,” she says.

Two years ago, Tassy was sponsored through World Vision.

Thanks to World Vision’s training, Tassy’s family learned about proper sanitation and hygiene — including using a tippy tap for handwashing. (©2016 World Vision/photo by Laura Reinhardt)

Mosquito nets from World Vision keep Tassy and her grandparents healthy. “They protect us from mosquitos. We don’t get malaria these days,” says Tassy’s grandfather, Nelson. (©2016 World Vision/photo by Laura Reinhardt)

Her sponsor sent extra gifts that enabled her to buy a mattress and blankets.

Sponsors’ monthly contributions have transformed Moyo. Solar-powered mechanized boreholes now bring clean water to a nearby tap. Before, Jerecy traveled two hours to get water for the family.

A clinic in the community is also being converted to a hospital. Now Jerecy and Nelson won’t have to pay for transportation costs to get their medication.

World Vision partnered with the Zambian government to make sure families in Moyo had mosquito nets. Since then, no one in the family has gotten sick with malaria.

Nelson thanks donors and sponsors; “You have taken it upon yourselves to realize we are one. We may have different skin color, but we are all one created by God.”

World Vision’s work has helped the community realize the importance of sharing their animal wealth. Nelson and Jerecy participated in a goat-sharing program whereby families who received Gift Catalog goats then share some of their original goats’ offspring with other families in need.

“In the past there were some people who had animals and they would keep them to themselves,” says Nelson. “Since World Vision came we were taught to help one another because we are one in this community.”

Nelson also gives back by volunteering his time at the local clinic. He focuses on helping people when they learn they are HIV positive. He understands what they’re going through and he’s right there with them to offer encouragement.

Tassy’s sponsor sends letters of encouragement. The last one came with a package, which included a small Bible tucked inside.

Nelson doesn’t worry what will become of Jerecy and Tassy anymore. He knows that even if something were to happen to him, they’ll be in safe hands now.

They can do anything; they just need a believer.

Sponsor a child
Give a gift

They can do anything; they just need a believer.

Sponsor a child
Give a gift 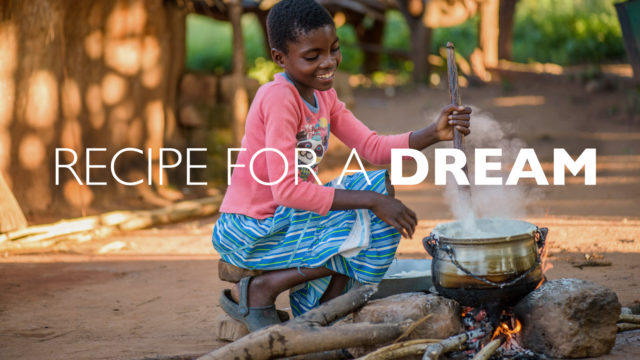 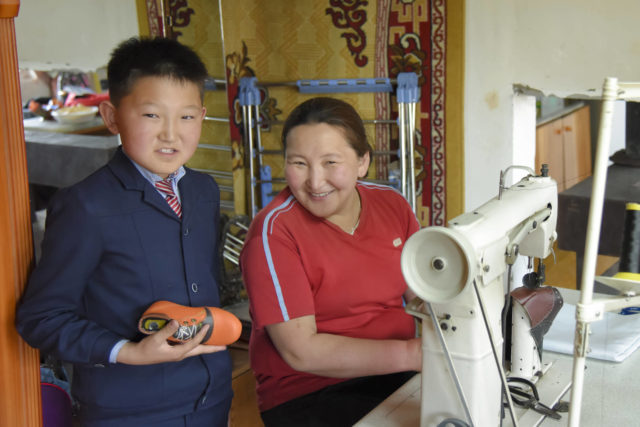