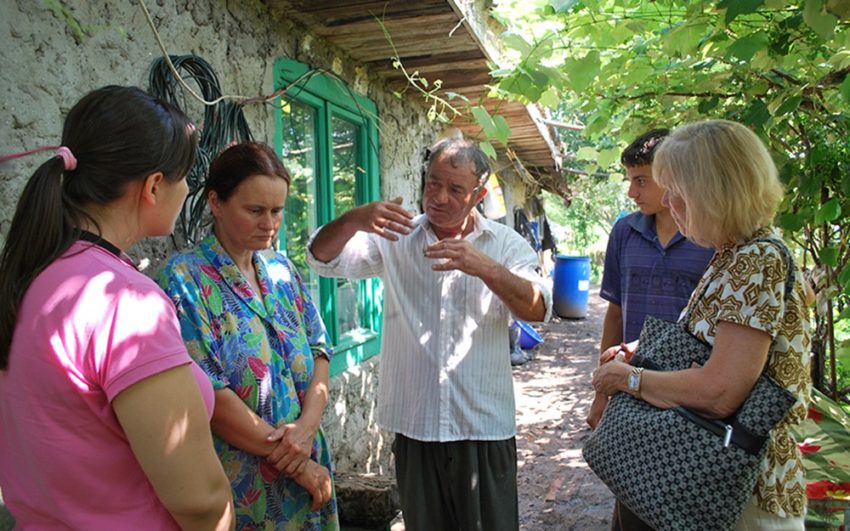 Gheorghe explains how the snow the previous winter had reached past the roof of his family's home in Ninisori, Romania. (Photo courtesy of Marilee Pierce Dunker) 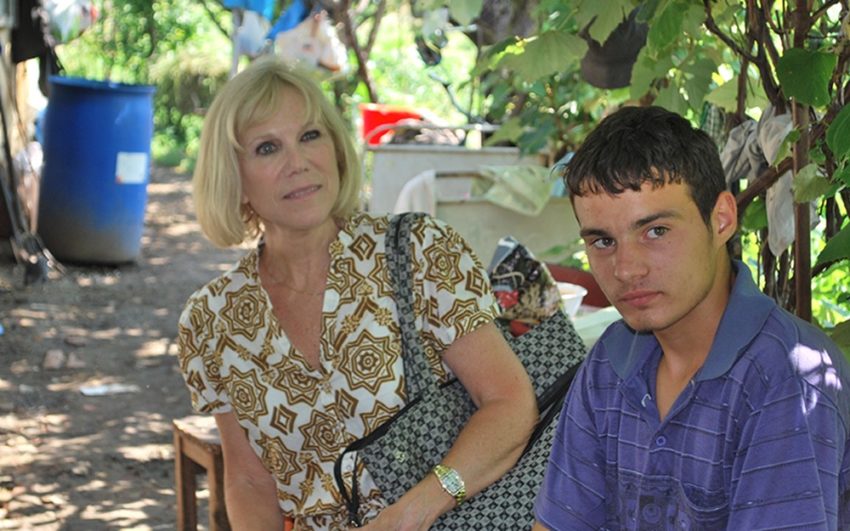 Marilee and Cristian, then 16, who was interning with a local vet. (Photo courtesy of Marilee Pierce Dunker) 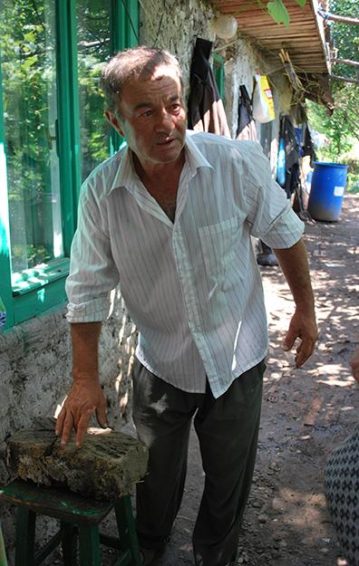 "My wife and I built our house out of bricks made from this earth," says Gheorghe. (Photo courtesy of Marilee Pierce Dunker) 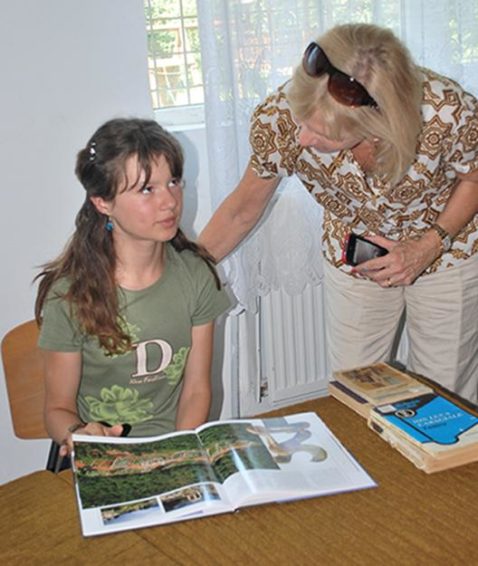 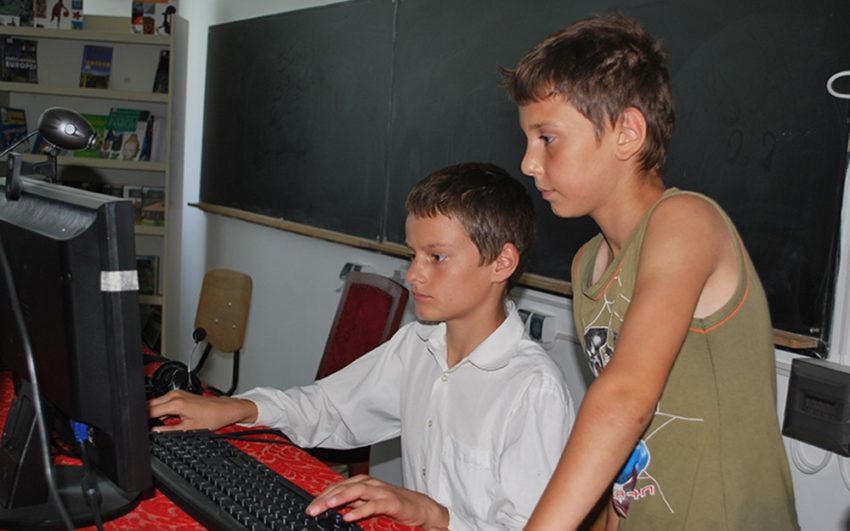 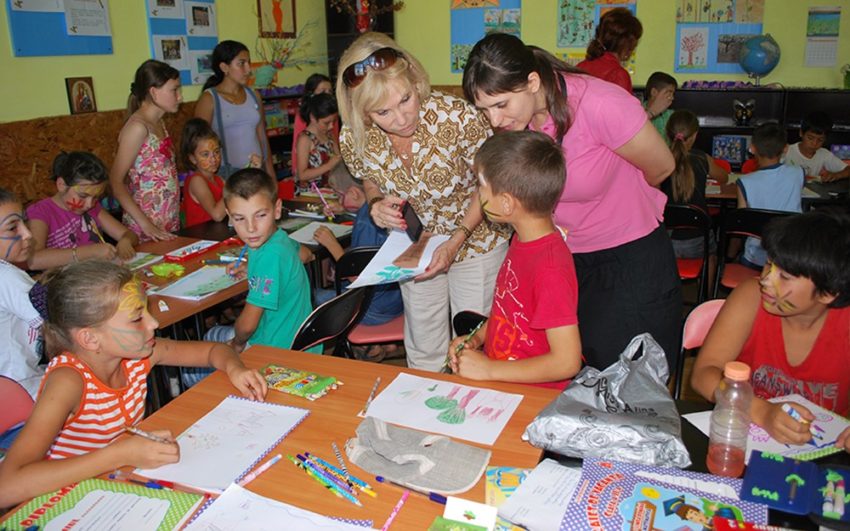 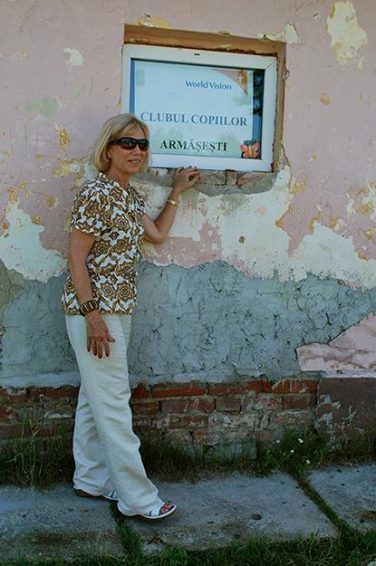 Some people just shine. It doesn’t matter where they live, how they dress, or how poor their circumstances. There is a light that comes from deep within that shines in their eyes and radiates in their smiles. I have met them all over the world in the most unlikely places where World Vision works. My trip to Romania in 2011 was no exception.

Nae Gheorghe Viorel, 48, was born at a time when Romania was struggling under the iron fist of communism. When I asked one of our World Vision staff in Romania what it was like to grow up under dictator Nicolae Ceauşescu’s oppressive regime, he replied, “It was a time when it was dangerous to be different. We all looked the same, wore the same clothes, ate the same food — even cut our hair the same. You didn’t dare complain or you would be punished. And you didn’t dare dream or hope for more, because that hope would only be disappointed.”

This was the world that Gheorghe grew up in.

Then, in 1989, Ceauşescu was overthrown and suddenly people were free to hope and dream. For Gheorghe this meant claiming his own land in the small village of Ninisori, marrying a local girl, and starting a family.

“My wife and I built our house with our bare hands,” he told me proudly. “We formed the bricks out of this very earth!”

I couldn’t help comparing the two-room structure with its tin roof and poorly sealed windows to the mud brick houses I have seen in Africa. It was hard to believe that a family in Romania could have anything in common with a family in Kenya or Zambia, but the proof was right before my eyes.

“If you had come a few months ago,” Gheorghe informed us as we walked under a canopy of flowering fruit trees towards the house, “you would not have been able see my house. The snow was more than two feet over the rooftop last winter!”

Looking at the poorly insulated house, I wondered how the family had kept warm. At least in most parts of Africa, families don’t have to worry about sub-zero temperatures. I thought about the mailings World Vision had sent out last winter asking for donations for blankets and coats for Romanian children. My husband and I hadn’t given. Next time we would.

At the time of my visit Gheorghe and his wife, Stancia, 45, lived in their house with four of their five children. The three younger children were sponsored through World Vision. I had met their 13-year-old son, Marius, and 12-year-old daughter, Elena, at the World Vision community center earlier that morning. Now, as we stood outside of the vine-covered cottage, Gheorghe proudly introduced me to his 16-year-old son, Cristian.

A handsome boy with a shy smile and somber brown eyes, Cristian reminded me a lot of my grandson, Vinnie.

This is more than just a dream. … He will be a vet one day. —Gheorghe Viorel

As we shook hands, I noticed the difference between his hand and his father’s. Gheorghe’s hands were hard and callused from working the land. Cristian’s were softer — a hand used to hold a book or type on a computer.

We sat in the shade of the trees outside the house and I attempted to talk with the shy teenager who was quietly studying his hands.

“So Cristian, do you like school? What classes do you like best? Do you play sports with your friends?”

I had to lean forward to catch his muffled replies as they fell softly to the ground between us. Finally I asked, “Do you have a dream, Cristian? If you could do anything, what would you like to do?”

As the question was translated, Cristian lifted his head, really looking at me for the first time. “I want to be a veterinarian. I want to take good care of our animals and help my village,” he said, his dark eyes suddenly bright with determination.

Before I could respond his father spoke up, his broad, weathered face beaming with pride.

“Gheorghe wants you to know,” explained my translator, “that this is more than just a dream for his son. Cristian is already interning with a local vet who will help him continue his education after he graduates. He will be a vet one day.”

A look passed between father and son, and I had to look away. The light of hope was nearly blinding.

As we drove back through the picturesque countryside I couldn’t stop talking about the joy and hope that I had witnessed — not only in Cristian’s family, but in all the families we met that day. The fellow travelers smiled and nodded in agreement.

I know what she means. They shine.

Twenty-five years after communism fell in Romania, much remains to be done in a country still in transition. Formerly institutionalized children are now adults facing an uncertain future. Romania’s entrance into the European Union brought both opportunity and challenge. Meanwhile, rural families remain in persistent poverty, and the children continue to need innovative solutions to ensure a stable future. Read their stories.

Sponsoring a child in Romania is a personal way to show God’s love to a child in need. 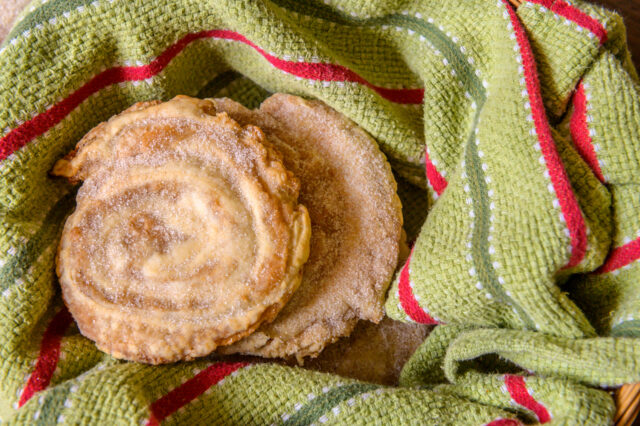