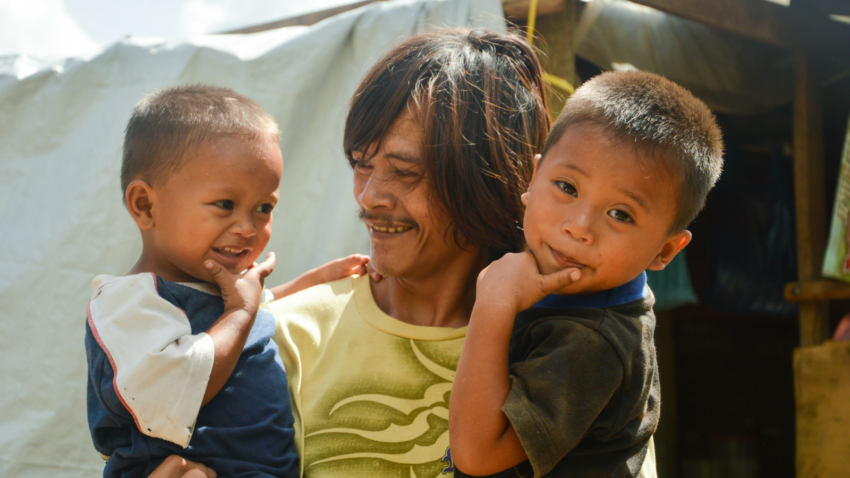 CJ and James Patrick play with their father, Patrick, during his day off. (©2014 World Vision/photo by Maryann Zamora)

Read how God answered the prayer that Maryann and Patrick prayed together in a moment of desperation and how he provided for Patrick’s family.

It was in a moment of utter desperation when I met Patrick in 2013.

He was hunched over among the debris-littered ground sobbing. He told me how he’d been separated from his wife and children in the chaos of Typhoon Haiyan. He hadn’t seen them in hours after the storm. Here was a 27-year-old man begging for the Lord’s mercy. He worried that his wife and children were among the bodies I’d seen cast alongside the road on a horrific journey to Tacloban.

“I’ve been everywhere to look for my two children, my wife, and my mother, but I can’t find them,” he told me while gasping between sobs.

It was a scene of absolute misery. I was crushed, my heart torn as I took in his situation: a young man the same age as me who had seemed to have lost everything. As he huddled on an empty bag beside an uprooted tree, I shared a few of my biscuits and some of my water, just to help him fill his hungry stomach.

As he started eating the biscuit, I stood up to leave. But before I walked again, a little voice told me to spend one more moment with Patrick.

I asked him if we could pray together. He said yes. We covered our hands on top of each other and embarked on a prayer that left us both in tears.

“Lord, I know what we gave him is not enough, but please give him comfort and his family. Help him find his mother, wife, and two little children,” I prayed.

It was all I could offer before I continued with our assessment team in Tacloban. For the rest of the day, I encountered more and more bodies. I witnessed people sobbing and grew more devastated by all the destruction.

When I left Tacloban a few days later, and World Vision began providing disaster relief assistance to the thousands of survivors, I often remembered Patrick’s situation.

To me, he was the face of the disaster — and I continued to pray for him. Soon after, I urged my friends and family to pray for Patrick as well. I posted his photo and story on Facebook and asked for prayers for him as he searched his family. I asked for prayers to give him strength and courage and all for all the typhoon survivors who have the same story as Patrick.

As time wore on, and the weeks unfolded after Haiyan, I started to think less about Patrick and his family.
But then one Sunday, almost three months after Typhoon Haiyan, I was sent back to Tacloban.

As the plane landed, I felt goosebumps. The experience of walking through and over the debris and bodies two days after Typhoon Haiyan vividly returned to me. I continued with my work, but the experience was never far from me.

A day later, along with a teammate, I rolled into a local eatery for a late lunch. As I ate chicken curry I looked up and caught a familiar face. It was Patrick. He was working as a server at the small restaurant.

A lump swelled in my throat. He smiled widely and took a seat at our table. “By God’s grace, I found my family, and they are safe. Our prayer was answered, ma’am,” he told me.

My heart sang. I was overjoyed.

I was trying to control my tears. I am amazed and still overwhelmed at how God revealed how powerful he is.

“As soon as I found them, after five days of searching for them, I knelt down and raised my hands thanking God for answering our prayer. At that time, ma’am, I was about to give up and gave myself another three days to look for them. I was just praying that in case I couldn’t find them that they would just be safe,” Patrick told me in the restaurant.

I asked him where his family was now living, and Patrick said, “We live in a World Vision-covered area, and my family received relief goods from World Vision. We are very thankful to receive them. I wouldn’t have known where to look for food for my children if World Vision hadn’t helped us.”

When I heard him say those words, I asked to visit his family.

A short time later, I visited Patrick’s home, catching him as he was hanging his children’s clothes to dry. I met 4-year-old CJ and 2-year-old James Patrick. I greeted his wife Ana Rose who had just come from washing the laundry along the river, a few meters away from their small makeshift house covered with a tarpaulin.

Ana Rose shared how they survived after Typhoon Haiyan.

“We had been hungry for almost a week. Most of the time, for days after the typhoon, my neighbors would just share a plate of rice for the four of us, but of course we couldn’t eat much because our priority was for our children. We didn’t care if we are hungry as long as our children were not.

“The good thing is World Vision came and gave us relief goods with 30 kilograms of rice [66 pounds], sardines, and kitchen utensils. They gave us blankets, mosquito nets, and a tarpaulin that we use as our roof because our house was totally damaged by the strong winds during Typhoon Yolanda [local name of Typhoon Haiyan]. We really didn’t know how we would have survived if World Vision didn’t help us. Thank you so much to all of you and to God for helping us to survive and for keeping our family complete,” Ana Rose said.

Hours after leaving Patrick’s home, I could feel God’s presence even in the aftermath of the storm. Truly, God is real. God answers prayers and never forsakes his children.

Thank you, Lord, for this answered prayer.

When you sponsor a child, you become an answered prayer for a family and bless them long-term. Choose a child to sponsor in the Philippines today!

Read more from the World Vision blog here, and comment below with a prayer of praise for Patrick!