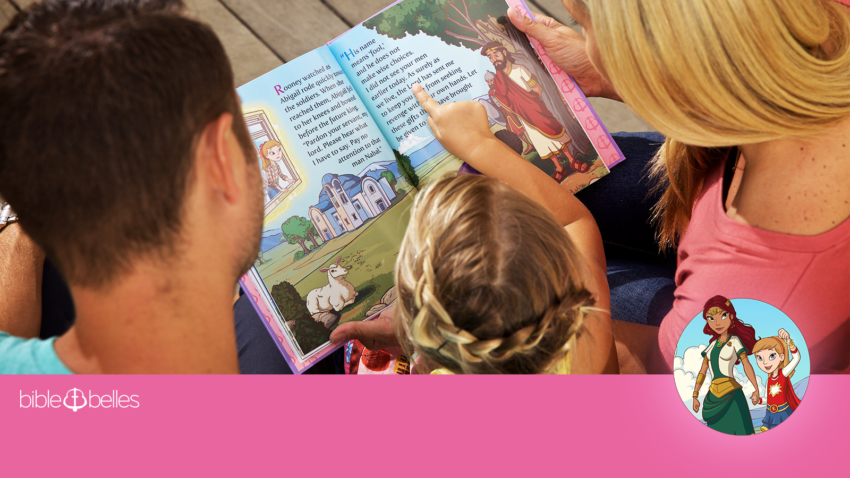 Our friends at Bible Belles designed their book series to give today’s generation of girls real heroes: showing them that character is the true measure of beauty and empowering them to be heard.

As the fifth book, Deborah: The Belle of Leadership, launches this month, read about five biblical heroes who show girls that their voices matter.

Again, if the trumpet does not sound a clear call, who will get ready for battle?—1 Corinthians 14:8

A couple of years ago, I was sitting in my living room, surrounded by stacks of cardboard boxes, stamps, and industrial tape. Our team was working to ship out the earliest orders of the first Bible Belles books. There was only one title back then, Hannah: The Belle of Prayer.

We lovingly slid each Hannah into her temporary manila envelope home and sent her off and into the homes of girls across the country. As we worked, Jess, our first official hire, and I were having an impassioned conversation (which happened almost every time we got together) about the struggles girls face today and why the Bible Belles were the solution.

We knew that girls needed real heroes and the ones that culture was offering weren’t doing the job. All the little girls we knew could name and tell us every detail of the Disney princesses, but none of them had ever made a meaningful connection with the women of the Bible. We wanted to point girls to Scripture and the women who could show them that character, not culture, is the true measure of beauty.

I taught middle school for many years, and it wasn’t long after I began my teaching career that my heart began to break for the next generation of girls. I spent day after day helping my female students deal with a slew of disturbing yet eerily familiar issues. A former mean girl myself, I was well-versed in all the drama. Between all the cattiness, superficiality, exclusion, lying, and widespread misuse and abuse of technology, even I had my hands full. But I didn’t come home each day feeling sad about what they were going through. Rather, I would come home angry.

There in my living room, amidst a sea of packing materials, Jess looked at me. I’ll never forget what she said.

“The problem that makes you the most angry in the world is the one you are supposed to solve.”

Even though I was a classroom teacher for many years, it was not until I became a mother that I realized just how angry I was that there are millions of girls around the world who, due to a variety of factors, will miss becoming who the Lord created them to be. They will spend their lives beat down by a world that tells them what they need to be in order to be beautiful, that they have to earn their worth. Angry that there is even one girl who will spend her life believing she doesn’t matter.

I imagine this little girl, sitting alone in the dark. Her thoughts swirl. Her insecurity swells. Her confusion rises, and she cannot bring herself to stand. So she sits, and her voice — the gift entrusted to her by the Father to make her unique impression on this world — remains silent.

I believe her silence is a tragedy we can prevent.

The sound of the Belles will be heard

Whenever I’ve spent time thinking about the world we live in and what girls are up against, I tend not to think about it in a visual sense. It’s not that they aren’t hit on all sides by a constant barrage of images that are working together to dismantle their self-worth. They are. For me, though, it’s always made more sense to refer to this bombardment as noise — a steady and consistent roar that does two things:

How different would this world be if the next generation of girls learned earlier in life the truth about who they are? What would the world be like if these girls grew a deep and meaningful relationship with God and began to live out what he envisioned when he authored the stories of their lives? What would that world sound like?

There would be a rumble, a rising sound of young women who declare in one voice that they do not believe the lies of the enemy. These young women refuse to live worried about perception or perfection. Instead, they live every moment in full pursuit of God’s plan and their purpose.

When we began this adventure to connect girls to the women of the Bible, we weren’t sure which women to include. After a lot of research and prayer, we chose five women who we felt represented a progression — a journey of discovery a girl could take to go from no relationship with God to becoming equipped to step into her unique leadership role in his kingdom.

Five heroes who could show girls everywhere how to make a different kind of noise.

Five heroes who could show that little girl that hers is a voice that matters.

Hannah: The Belle of Prayer

Hannah is first because open and honest communication is the first step she will take to build a meaningful relationship with her Father. She will have to open up her life to him and tell him the truth from deep within her own heart.

Esther: The Belle of Patience

Once she has let the Lord into her life, the next step will be for her to be still, to wait, to listen for his voice, then act according to his timing.

Abigail: The Belle of Bravery

Every relationship, once it is established, is sure to be tested. She will need to call upon the courage of God to do what is right, even when she feels afraid.

Ruth: The Belle of Loyalty

She will discover that the Lord calls her to love others faithfully, putting their needs ahead of her own.

Deborah: The Belle of Leadership

She will devote her life to love, sacrifice, and service, becoming the bold leader God created her to be.

It wasn’t until we put these five women in that order that we realized their initials spell the word HEARD — a beautiful symbol for empowering a girl who feels like her voice doesn’t matter to feel emboldened and prepared to go out into the world and use that voice for God and for good.

Hannah. Esther. Abigail. Ruth. Deborah. These are the real heroes: the women of the Word. They are the role models who can do more than inspire one girl to step out of her comfort zone. They can mobilize an entire generation of girls to live outside of them.

Let’s start helping the next generation of girls understand that they are heirs to a different kingdom than the one they occupy in the here and now. Let’s help every girl to rise up, to reach, to stretch for something better: a chance to change the narrative of this broken world to one that looks and sounds a whole lot more like Jesus.

Deborah: The Belle of Leadership

Bible Belles is honored to be partnering with World Vision for the release of the fifth and final book in the HEARD series.

Deborah, the Belle of Leadership

We’re honored to partner with Bible Belles to help empower girls to grow into the leaders they were created to be. For every copy of "Deborah" sold, together we'll provide one to a girl in an under-resourced community! Order here to #LeadLikeDeborah: http://go.biblebell.es/WVDeborah

Israel’s first and only female judge, Deborah, was a humble servant who dedicated her life to doing the work God called her to do. She not only had the wisdom to know what needed to be done; she used her influence to stir herself and others to action.

It’s time to equip girls all over the world to be as bold in their faith as Deborah was and to influence an entire generation to lead like her.

Be a part of the #LeadLikeDeborah movement and together we will inspire the next generation of leaders.

For every book purchased, an additional book will be donated to a girl living in an under-resourced community through World Vision’s U.S. programs.

To participate, head to BibleBelles.com!