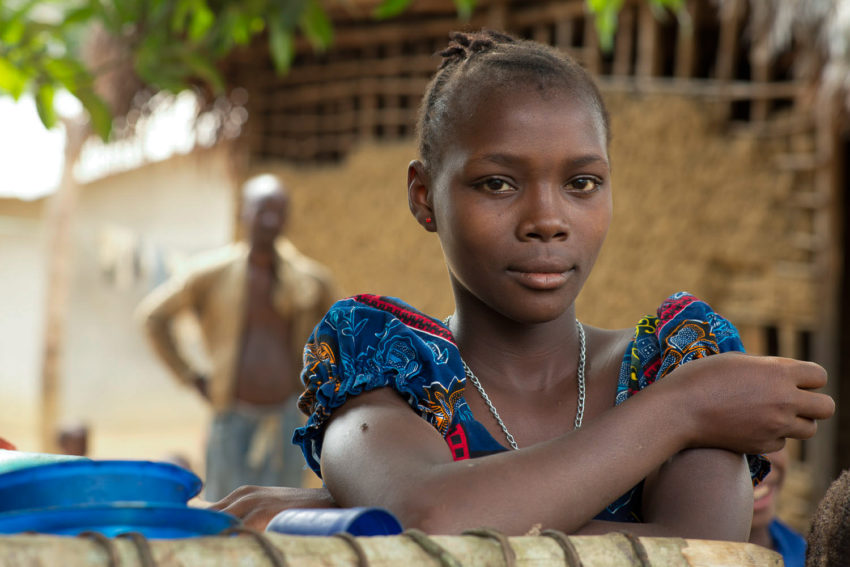 Jenneh in her village. She was betrothed before she was even born. (©2013 World Vision/photo by Ian Winstanley)

With our partner 10×10 and their documentary, Girl Rising, we’re aiming to ignite a movement to educate girls around the world. Millions of girls, like Jenneh in Sierra Leone, face barriers like child marriage to their education. This is Jenneh’s story.

Today, join us in celebrating the U.N.’s International Day of the Girl Child!

Jenneh (name changed to protect identity) was betrothed even before she was born. “I was told that a man said to my mother if she gave birth to a baby girl, then I would be betrothed to this man,” she says. “My parents agreed. So when I was born and started to get a sense of my own life, I was always told that I belonged to a man and someday he will come for me.”

On the day she was born, this man — John — returned and paid Jenneh’s mother a dowry, and she gave her word that they would be married.

Jenneh was 11 the first time she met him. Her life at the time was going to school during the days, and in the evenings and on weekends she worked on her family’s land. “I love school and like business studies and want to work in medicine,” she says.

After her primary school exams, during the holiday, John arrived to take his wife — her — home with him. Her family was too poor to continue paying for her education, so John said he would pay for her school when he took her home to a town about 50 miles away. The wedding would be in four days.

But Jenneh didn’t like him. “He was big and as far as I could see he seemed too old for me, much older than me. He seemed about 41 years old. I didn’t tell any of my friends. didn’t like the relationship so I didn’t want to discuss it with my friends.”

Some of Jenneh’s friends were in similar situations. She would see her friends in their marriages, unhappy but pressured to accept the arrangement because of their family situations, afraid to say no.

Jenneh expected the same for herself. “Marriage will not be good for me because I will be forced to do what he likes and not what I like because he is older than me. I was supposed to be taken away to a town many miles away. I would miss my family. I would miss everything because I like everything here.”

Having never met John before, she was afraid of him too. Though he had promised to marry her and pay for her to stay in school, she only had his word and was “frightened to go with him because maybe he can just change his mind and do something very bad to me,” she says. “I kept thinking about it and worry about this every day, every minute, in fact.”

When she told her parents that she was not interested in the marriage, they told her that they had given their word to John, a bond that represented them, and they would not change their minds. She was marrying him.

“I was not happy, but they tried to force me and tears were running from my eyes, and I was very afraid that there was nobody to protect me anymore,” Jenneh remembers. “I was very sad; that is all I can say.”

Distraught, Jenneh planned to run away and go live with her aunt. But someone Jenneh knows informed World Vision about her situation, and they came to speak to her parents, unknown to Jenneh at first.

On the day of the wedding, World Vision came. They quoted the laws against child marriage and “showed the relevance of leaving the children, especially the girl child, at school — because when you educate a girl, you educate the whole nation,” Jenneh remembers.

The wedding was called off. But John said that he would never forget about the little girl he had been promised to marry. He said he would return.

“I didn’t like it, and I was afraid that he will come shortly,” Jenneh says. “[But] I feel protected now, as World Vision knows.”

World Vision continues to monitor the situation to ensure it does not happen again.

“In the future, I want to finish my education first; then I will establish a business,” Jenneh says. “I advise that all those in the same predicament, when they are being forced to get into marriages that they are not willing to do or they are not 18, to go to World Vision.”

Millions of girls face barriers to education. Join girl champions around the world and help us ignite the Girl Rising movement! Host a screening of the documentary this month in your community: Register an event, or view the I.D.G. toolkit for other resources.