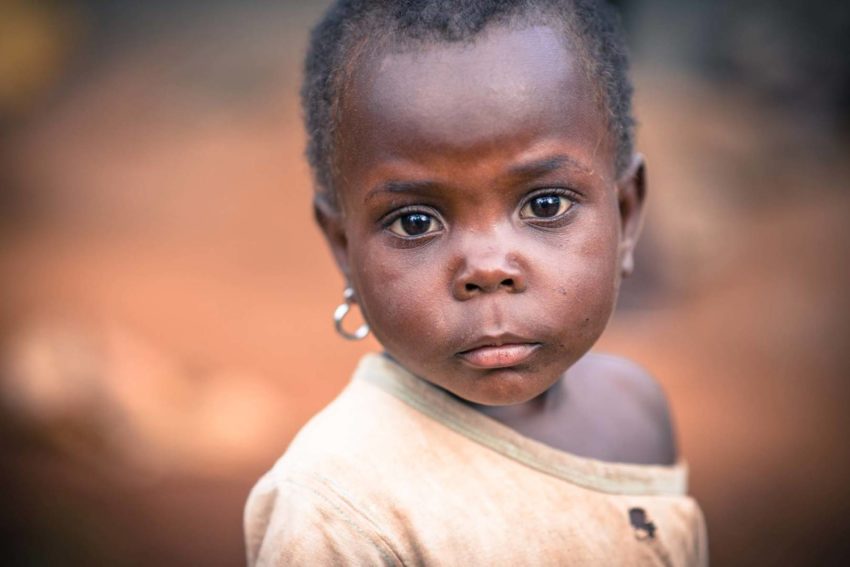 3-year-old Sharon in Uganda wears an earring — to protect her from child sacrifice. (©2014 World Vision/photo by Jon Warren)

In certain districts of Uganda, child sacrifice is a real danger. Today, Kari Costanza writes from Uganda about 3-year-old Sharon, whose pierced ears may protect her.

Read how a World Vision-supported amber alert program is helping to recover children that have been taken.

Claire wanted pierced ears more than anything — from the time she was little. I wasn’t ready. I was worried she wouldn’t be able to take care of them. I didn’t want her to grow up. So, we battled. I finally gave in, wincing as I watched.

Thinking over this mother-daughter struggle took on new meaning this week when I saw 3-year-old Sharon wearing a shiny silver earring — an earring much too big for a toddler.

“Why is her ear pierced?” I asked Obed, the World Vision staff person who had taken us to this village in Uganda’s Mukono district.

“It is believed that a child with a pierced ear will not be sacrificed,” he told me.

Mukono District is the center of child sacrifice in Uganda.

“Witchcraft has been there,” says Obed, “but sacrifice is new. People believe in witchcraft as a way of reviving their fortunes and getting money to boost the family income.”

Perfect children are targeted, he says, those between 2 and 15. If a child has a scar, says Obed, the witch doctor will reject her or him and ask for another.

Sharon’s brother, Moses, was the victim of child sacrifice last December. He was 15.

“We sent Moses to buy Irish potatoes,” his mother, Rehema, told me. “It was a Thursday. We waited. He didn’t come back.”

When the family finally found Moses, it was the next Wednesday. He was lying in a sugarcane field. His head, heart, and genitals had been removed.

“I wish something would pierce me so I could die,” Moses’ father, Matthias, tells Obed, his counselor and friend. Obed tries to comfort him, reminding him to think of the children he has left. But Matthias is inconsolable.

Obed Byamugisha is more than a listening ear. He is a 29-year-old dynamo, dedicated to stomping out child sacrifice in this community and all over Uganda. With World Vision funding, he and the community have devised a plan — a rural Amber Alert for missing children.

Instead of our freeway signs, TV messages, and texts, Obed’s system uses village drummers to beat out a special rhythm alerting the community that a child has gone missing. Motorbike taxi drivers who wait for passengers in the village center immediately drive to block off escape routes. A village alert committee notifies local police, community leaders, and radio stations that a child has been taken.

The community embraces and owns the plan because they worked with Obed to develop it — the only program of its kind in Uganda.

The program is working. Already two children have been located after being taken.

This innovative project will continue to save lives as it spreads across Uganda. It will also help protect children against abuse. But it will never bring Moses back. He will never attend school, where he was a class leader, or play soccer on a golden afternoon with his friends.

Thinking of Rehema’s loss makes me anxious to get home to my family, to my daughter, Claire, to hold her close. And, perhaps, to buy her a new pair of earrings.

Child sponsorship is one of the best ways to protect vulnerable children and keep them safe from threats like violence, exploitation, abuse, and neglect. By providing vulnerable children with access to quality education and supporting families to meet children’s immediate needs, such as food and housing, we are making a significant contribution toward preventing child slavery, trafficking, exploitation … and child sacrifice. Choose a child to sponsor in Uganda today.