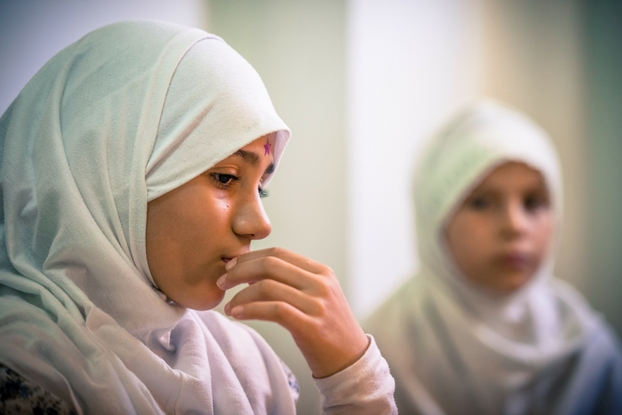 Today begins the seventh year of the Syrian refugee crisis.

In 2013, when the crisis was relatively young, our president Rich Stearns met 10-year-old Haya in Jordan. The song she sang to him that day became a pivotal moment in his life. She asked him, “Do you ever think of the children of Syria?”

Hear from Rich about the impact of that moment, and three and a half years later, join us in reconnecting with Haya.

How does God get your attention about something that matters?

For me, God tends to use people, specifically children, to shake me out of complacency. One child’s story can simplify a complicated crisis and bring into sharp focus what’s most important. Statistics and rhetoric fall away when I’m staring into the face of a suffering child. All I want to do is find a way to help.

At the time, the Syrian civil war was in its second year — one of several Middle East countries in upheaval following the Arab Spring. Honestly, I wasn’t focused on this crisis; World Vision was responding, but there were plenty of other ministry priorities demanding my attention. Now the conflict was escalating, with refugees pouring into neighboring countries. A colleague asked me to go and see the refugee crisis for myself, so after some meetings in London I tacked on a visit to Jordan.

At ground level, the scene was disturbing. I toured Za’atari refugee camp, a sprawling mass of tents stretching as far as the eye could see, surrounded by barbed wire. This was home (if you can call it that) to nearly 100,000 people — so many that another camp, Azraq, was being built nearby for the expected influx of refugees. These were people who had left middle-class lives to flee with little more than the clothes on their backs. They had survived bombings and sniper attacks only to suffer the miseries of hunger, thirst, sickness, and hopelessness.

The need was eminently clear. But even if World Vision scaled up our response, I thought, would our supporters care? A man-made crisis doesn’t trigger the kind of generous outpouring a natural disaster does. And this war was mind-numbingly complex, causing most Americans to give up and tune out. To top it all off, the refugees were largely Muslim — a group increasingly distrusted in the Western world.

Then I met Haya. Her father had gone missing in the war, and she and her mother and brother had taken refuge in Irbid, Jordan. This bright girl wasn’t in school, but she attended a remedial education class run by World Vision. And evidently, when she was told that the president of an organization was coming to visit, she thought very carefully about what she was going to say to me.

Haya poured her feelings into a song and a letter. “Syria is crying out for her children,” she sang. “Her children were her candles, and they have faded out.” In her letter, she was more direct, and she aimed for a much wider audience than me. “I am calling on you — the people of the other world. Have you ever thought of the children of Syria?”

Her words hit me on a visceral level. Looking at Haya, I realized: This is the face of a refugee.

Meeting Haya was a turning point for me. No matter how hard it would be to draw Americans’ attention and compassion to the Syrian refugee crisis, I knew I had to try. I had to find a way. And I would use Haya’s face and words hundreds of times over the next few years as I spoke at churches and Christian conferences: “Have you ever thought of the children of Syria?”

This wasn’t the first time a child had changed me.

In 1998, as a brand-new, wet-behind-the-ears president of World Vision U.S., I took my first trip to Uganda, ground zero of the AIDS pandemic. That’s where I met a young boy with the same name as me, Richard. He was an orphan living in a meager thatch hut with his brothers. Their parents, who had succumbed to AIDS, lay buried in graves marked by crude piles of stones outside. I had been told that there were 12 million children like Richard across AIDS-ravaged Africa. Sitting in that hut, my mind reeled at the enormity of the crisis.

I asked Richard if he had a Bible, and he brought out his treasured book. “I love to read the book of John,” he told me, “because it says that Jesus loves the children.”

At the time, Americans regarded AIDS as a shameful sexually transmitted disease, and Christians were somewhere on the spectrum between uncaring and downright hostile toward its victims. It would not be easy to change hearts and mobilize support for AIDS orphans, but in that moment with Richard, I knew I had to try. I had to find a way. I would preach what Richard made plain to me — that Jesus loves these children.

With AIDS, we were successful; World Vision launched an initiative that engaged hundreds of U.S. churches and connected sponsors with tens of thousands of AIDS-affected children across Africa. We helped turn the tide of that vicious disease. And it all started with the face of a child.

I hope someday I can report the same generous response to the Syrian refugee crisis.

Is God trying to get your attention with a hurting child? She may not be physically in front of you. Maybe she stares at you from a magazine or your computer screen. Don’t look away. That child can tell you what you most need to know about a faraway, complicated crisis — simply that precious children Jesus loves are suffering.

Look at that face, and find a way to help.

UPDATE:  After four years, I’ve just this morning received some news about Haya from our staff in Jordan. Now 14, Haya is still in Irbid, and she and her mother and brother live in a better apartment, an airy space with a bathroom of their own (her mother’s greatest wish). Haya is in private school, and despite the challenging curriculum, she is happy to be there. In 2013, she was attending World Vision’s remedial education classes, which helped prevent her from being left behind in school. The family has received help from various sources, including UNHCR and local donors, but Haya singled out World Vision with thanks: “We have never seen or received the same amount of care and support from any other organization.”

Sadly, the family still doesn’t know the fate of Haya’s father. They believe he would be with them if he could. And Haya continues to long for Syria, speaking of it as “the paradise of the world.” She said, “All we want to do is go back and live there the way we used to.”

To learn more about the current state of the Syrian refugee crisis and World Vision’s response to help children and families displaced by the conflict, visit our Syria FAQs.

Have you ever thought of the children of Syria? Consider making a donation today to help support children like Haya.