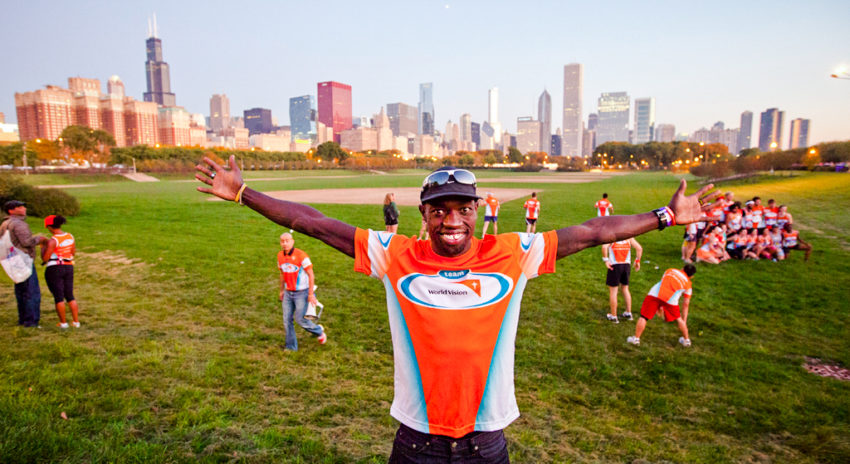 As part of a partnership between the Lopez Lomong Foundation and Team World Vision, Lopez ran the Chicago Marathon to raise money for water in South Sudan. (©World Vision)

Today’s post is the first in a series that recounts the life story of Lopez Lomong, who will run with Team USA in the London 2012 Olympics with dreams of bringing home a gold medal.

While his current life sounds like a dream come true, his childhood was more like a nightmare. Born in war-torn South Sudan, Lopez was kidnapped by rebel soldiers at the age of 6 with two foreseeable futures: being forced to kill as a child soldier or being killed himself.

Part one of the series tells the story of this dark chapter of Lomong’s life. Follow along as we hear from him on his abduction, being adopted into the United States, and the realization of his Olympic dreams through his new book, “Running For My Life.”

My eyes were closed in prayer when the trucks pulled up. I heard them before I saw them.

When I looked up, I saw soldiers pouring out of the backs of the trucks. They appeared nervous, as though they wanted to get this over with as quickly as possible.

“Everybody down! Now!” they shouted as they ran into the middle of my congregation.

I knew our country was at war. About once a month, my mother and father grabbed me and and my brothers and sister and ran for shelter as bombs fell in the distance from airplanes that flew far overhead. But I had never seen a soldier until this bright, summer Sunday, and I had never expected to see soldiers invade a church service.

The soldiers continued running and shouting. Our priest tried to reason with them. “Please do not do this now,” he said.

The leader of the soldiers ignored him. “We’re taking the children!” he screamed.

I did not know what he meant by that. I would soon.

My parents dropped to the ground, pulling me down with them. I huddled close to my mother’s side. She wrapped her arm so tightly around me that my ribs hurt. All around me people screamed and cried. I started crying too. My mother tried to calm me but she was as frightened as I was.

Suddenly I felt a hand on my back. I looked up and saw a giant man standing over me. When you are a little boy, every adult looks like a giant. His gun was slung behind his back. A chain of bullets hung across his chest. My mother pleaded with him: “No, no, no! Don’t take my boy!”

The soldier did not reply. With one hand, he yanked my mother’s arm off of me while picking me up with the other. He dragged me past the giant tree at the front of our church and toward the trucks. “Hurry up! Let’s go!” he yelled.

All around me, other soldiers herded boys and girls and teenagers toward the trucks while yelling for everyone to speed up.

I turned around. My mother and father were off of the ground, chasing after me. Tears ran down their faces. They were not alone. All across our church, parents chased their children, weeping and wailing.

“Please do not take our children,” they begged. “Please, please, we will do anything you ask — just do not do this.”

One especially giant soldier swung back around toward our crying parents. He waved his gun in the air and screamed, “One more step closer and we will open fire!”

I could not see what happened next. I felt myself being picked up and and thrown into the back of one of the trucks. I bounced off another boy and and landed on the hot, dirty, metal truck bed.

The truck was full of children from my church. A green canopy covered the top and sides of the truck bed so I could not see out. Suddenly the tailgate slammed shut and the truck lurched forward.

I did not know it at the time, but my childhood had just ended.

A note from Lopez:

My thoughts are never far away from those other boys and girls who, for no fault of their own, will never know the carefree celebration of life that should be the right of every child.

It’s for this reason that I’m turning up the heat on awareness and positive engagement efforts in South Sudan, creating sustainable hope for the young ones who deserve life in all its fullness.

I invite you to follow this blog series and check out my website as I move toward London. Join me in running a race, buying a T-shirt, or giving a gift to benefit the people of South Sudan, creating real change in a land of endless possibility.

For more on my story, check out my new book, “Running For My Life.”