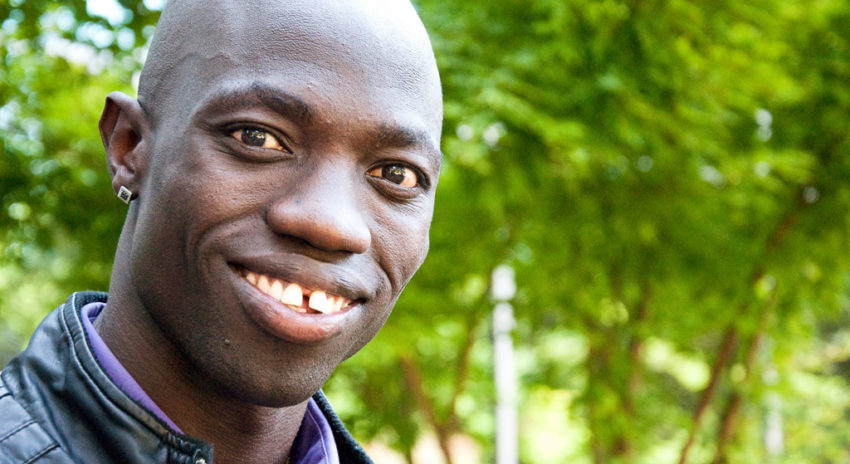 Lopez Lomong is a Sudanese-born American runner, who proudly carried the US flag in the 2008 Beijing Olympics. His own childhood — being abducted at age 6, fleeing across Sudan with other "Lost Boys" and spending 10 years as an "orphan" in a Kenyan refugee camp before coming to the United States — has given him a passion for improving the lives of women, children, and families in Sudan and around the world. (©2012 World Vision)

Today’s guest contributor, Lopez Lomong, will run with Team USA in the London 2012 Olympics at the end of the month. But behind his remarkable accomplishment is a turbulent — and inspiring — life story of danger, poverty, and ultimate redemption.

Now, this South Sudan native is partnering with World Vision to bring help and hope to children and families in his home country who continue to struggle one year after the celebration of its independence. Read the story of Lopez, and let us know your thoughts!

My dream of running for Team USA became a reality as I crossed the finish line of the men’s 5,000-meter Olympic trial. I am honored to run alongside American record-holders. This will be my second Olympic team.

It feels like I am a million miles away from where I might have been, had God not interrupted my life from the course it was taking. I’ve gone from being a “Lost Boy” of Sudan to a proud U.S. citizen who is loved and cared for by so many people in this country — no longer “lost!”

At the age of 6, I was kidnapped with other children from my Sudanese village church to serve as a child soldier. My subsequent escape and journey to Kenya ushered in a decade as an undocumented orphan in a Kenyan refugee camp.

I lived one day at a time, constantly hungry. I never imagined that one day I would stand with national champions, wearing a Team USA jersey.

Now, I have a loving American family. I have reconnected with and currently support my African family, and I’m a college graduate. Also, I am blessed to have such a supportive team of friends and professional sponsors.

In some ways, I feel like I’m smack in the middle of the biblical story of Joseph (Genesis 37-50). Repeatedly, Joseph is dealt what, for all intents and purposes, is a lethal, knock-out punch. But God doesn’t just rescue him. He later uses Joseph’s circumstances to protect and bless Joseph’s entire tribe.

Given the current economic and political situation faced by my native South Sudan and my tribe, the Buya people, many have given this new country little chance of survival. This month, we’re celebrating the one-year anniversary of South Sudan’s independence, but we do so buffeted by the blows of intertribal conflict, unemployment, food insecurity, aerial bombardment from our Sudanese brothers in the north, and development issues not meant for the weak of heart.

Despite these challenges, South Sudan is a nation full of strong and good people — and I have not given up on a bright future for the young country. Joseph remarked on the ill will of his Hebrew brothers that, “You intended to harm me, but God intended it for good to accomplish what is now being done, the saving of many lives.” (Genesis 50:20).

I believe that the same is true of my life. For that reason, I have created the “4 South Sudan” initiative.

Working with World Vision, the Lopez Lomong Foundation is raising resources to bolster great development work being done in South Sudan around the areas of health, food security, water, and education. This isn’t something I’m doing alone. In raising these critical resources, I’m being joined by a growing number of professional athletes, as well as everyday folks who still believe in the power of hope and God’s ability to transform people and nations.

Want to become part of this story? I invite you to visit my homepage at LopezLomong.com and become a part of one of the great survival stories of our time.

Give a gift, buy a t-shirt, or run a race with Team World Vision. Come and be a part of a dream come true!

How does the story of Lopez Lomong inspire you? Share your thoughts and reactions with us!