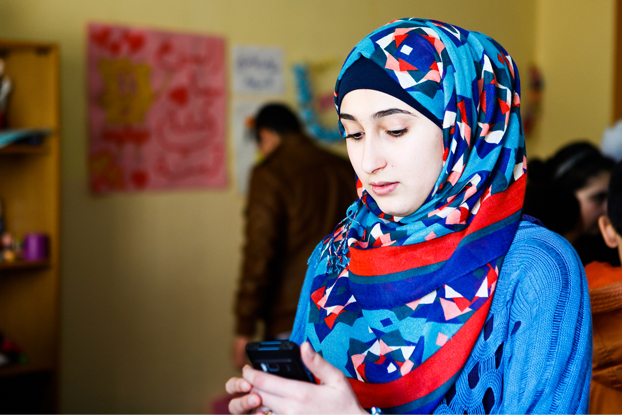 For three years, too many innocent people in Syria have suffered — above all, the #childrenofSyria. They have seen homes, schools, and hospitals destroyed. They have borne the brunt of indiscriminate violence and witnessed unspeakable abuse. Millions have been forced to flee, while millions more are trapped inside Syria in horrific conditions.

Join World Vision, Save the Children, Mercy Corps, UNICEF, and UNHCR in preventing a lost generation of Syrian children. Sign our petition here.

Today, Meg Sattler, World Vision’s communications manager for the Syria crisis response, describes meeting one of these children of Syria — a girl whose laughter would give way to tears without warning.

Today, a 15-year-old girl showed me a film of her bombed and ransacked house. She held her phone out in front of me, hands quivering slightly, and room by room I was taken on a shaky, somewhat pixilated tour of her family home. Heaps of clothes, papers, and trinkets covered dusty carpets amid overturned furniture. Here and there, a wall was blown out, sunshine streaming in where it didn’t before.

“That is my mum and dad’s room,” she told me. The camera zoomed into an open drawer, where family photos were strewn about. A lifetime of memories, rearranged.

I met this girl, Ola*, in Jordan, near the Syrian border. Once a middle-class teenager, she is now a refugee. She and her peers are bullied. They are living in fear of abuse. She goes to school, but it isn’t the same.

She is one of 2.5 million people from Syria who’ve now fled to neighboring countries. Like everyone I’ve met since I first arrived here last August, she loves her war-torn, broken Syria with every inch of her heart. Today, when twice without any warning her laughter gave way to tears, I wondered to what extent that heart had become war-torn and broken too.

Ola speaks articulately about issues facing Syrian children and youth. When I met her, she was participating in a session with other young people, deciding collectively which of their concerns would be most important to communicate to the public and key decision-makers. I hope, when that time comes in a few weeks, that their voices will be heard (their child report will be released later this month).

To so many around the world, the Syrian conflict is a political nightmare — tough to understand and perhaps easier to ignore. But blocking the Syrian crisis out of our hearts and minds does nothing to pressure parties involved in the conflict to agree upon a peaceful solution to the fighting or, at the very least, upon minimum standards to protect children. It also does nothing to ensure that Syrian children receive the aid they so desperately need right now, wherever they are.

Next week, the Syrian conflict will enter its fourth year. Millions will still be displaced within Syria. Many more will be making those first tentative steps away from the homes, bedrooms, and drawers full of photographs they’ve managed to hold onto for this long. They’ll sadly move toward the uncertainty of life in a camp, settlement, new community, or new country.

Humanitarian workers will be calling for assistance to keep up with the ever-increasing needs. And Ola, her peers, and 2.5 million others, will carry on with their lives in foreign lands, laughing when they can and, as I glimpsed briefly today, crying when they can’t — but carrying on regardless because that is what they can do.

Fifteen-year-old Ola is doing everything in her power to try to improve conditions for herself, her family, her friends — her Syria.

I hope the world is doing everything it can for her.

World Vision is working in Jordan, Lebanon, and Syria.

In Lebanon, we have assisted more than 190,000 Syrian refugees with food vouchers, hygiene kits, and projects to improve access to clean water and sanitation. World Vision also offers classes for Syrian children and operates Child-Friendly Spaces — safe areas where children can engage in fun activities and receive help recovering from emotional scars.

Be a champion for the #childrenofSyria. Make a one-time donation to support World Vision’s relief work for the Syrian refugee crisis.