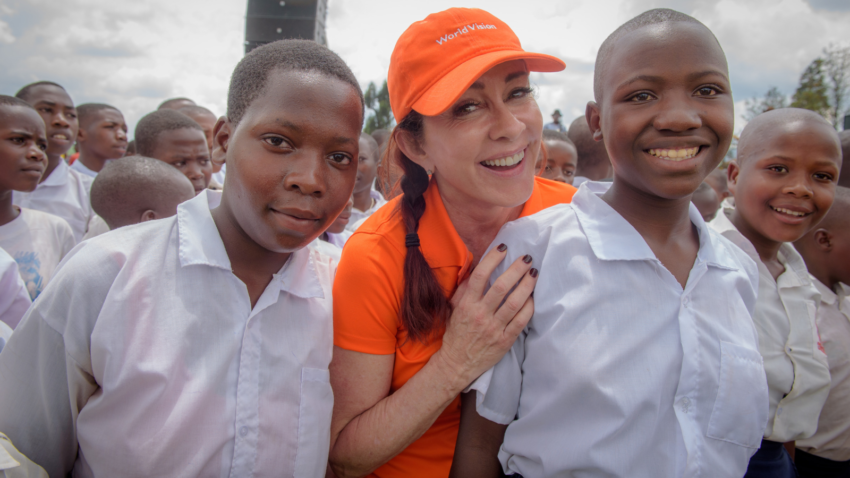 Actress Patricia Heaton considered a career in missions before her acting career took off. But God’s plan for her isn’t over!

Patricia shares about her recent trip to Rwanda to visit children like Delphin who are in desperate need of clean water.

When I first moved to California from New York around 1990, I wasn’t getting many acting auditions. So, one of the first things I did was go to Mexico to help out in an orphanage outside of Tijuana. We spent a weekend repairing a sewage system, laying down a lawn, and throwing a party for the kids there.

Before that time, I’d been completely focused on acting and success, but after spending time at the orphanage, I came back completely changed.

Now I saw two doors that God might potentially open to me — acting and the love I had for that, but also serving the children at the orphanage. I asked God to make it apparent which door he wanted me to walk through by closing off either acting or missionary work.

The acting auditions kept coming, and so I walked through that door, leaving behind the call to the mission field — or so I thought.

Clean water for all in Rwanda

This February, I went to Rwanda with World Vision to see some of their water work. In fact, World Vision and the Rwandan government have partnered on a goal to have clean water accessible to all Rwandans by 2024.

That’s good news because I met a little boy named Delphin there. He’s 11 years old, but honestly, I thought he was about 6 or 7. He’s stunted by malnutrition and bouts of diarrhea brought on by drinking dirty water.

The toll of dirty water

Delphin lives with his elderly grandmother. Because of her age, she relies on him to be her hands and feet. I could tell he feels the weight of that responsibility because he was so serious. A child deserves a childhood.

One of his chores is to get water for himself and his grandmother. But the water he has access to is dirty. In fact, it’s so dirty that one time it left him with such bad diarrhea that it nearly killed him.

When Delphin is sick, he can’t help his grandmother. Even when he’s well, he often misses school because of the time it takes to walk to the water source. That’s led to him repeating the same grade.

Dramatic change on the way

Soon, life is going to change dramatically for Delphin. His community is scheduled to get clean water this year! That will mean a lot of positive changes. He’ll be able to get to school on time. He won’t get sick from the dirty water and can attend school regularly. It might even give him time to play — to have a childhood. Multiply that by all the children in the community, and you can see the impact.

On my trip to Rwanda, I realized that God, in his goodness, hadn’t asked me to choose between those two doors. He’d opened the missionary door after all. He allowed me to have my acting career, which I love, but also to use it to help people.

I feel blessed to have gotten to see World Vision’s work in Rwanda — especially the water work. That’s why I’m thrilled to be bringing my fellow castmates from The Middle together for a mini-reunion on May 4! We’re hosting a 6K for Water in LA that you can join virtually and walk with us anywhere you are. Click here to join our team or donate to our goal of raising $50,000 for clean water!

Six kilometers is the average distance women and children walk for water that isn’t safe to drink. On May 16, 2020, tens of thousands of people will come together around the cause of bringing clean water to children just like Delphin. Every step we take is one they won’t have to! Sign up your whole family for the #6KforWater today.